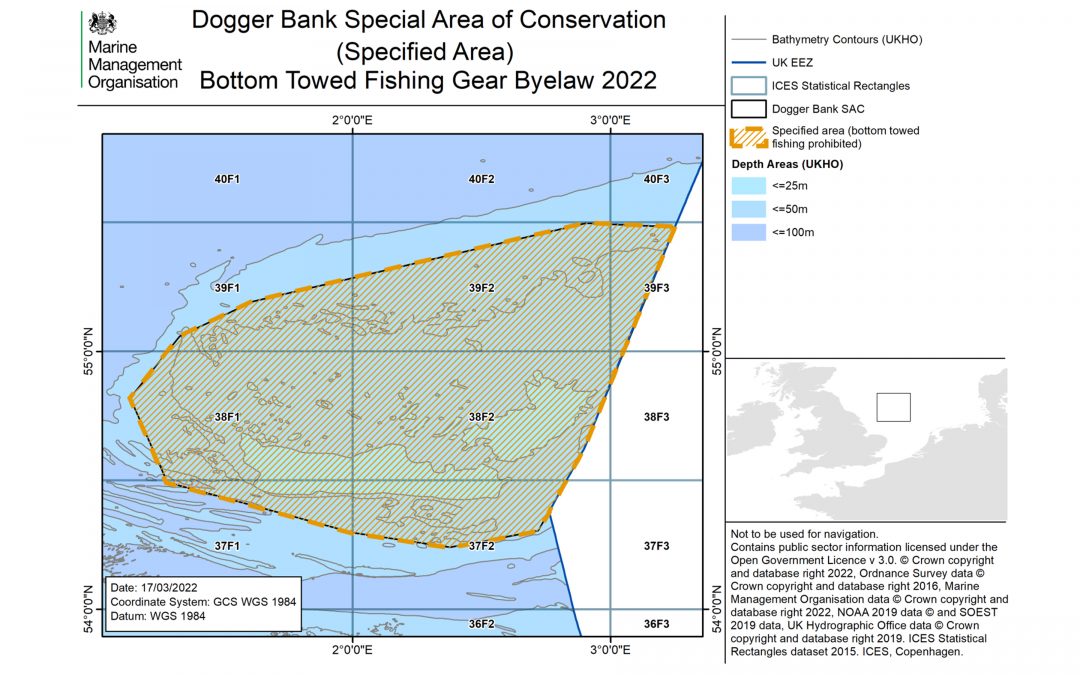 Fishing activity will be prohibited in four Marine Protected Areas (MPAs), the UK Government has announced. The move has been made possible by new post-Brexit freedoms which allow the government to protect rare habitats and wildlife in UK waters.

The byelaws will bring in management measures on fishing within these four MPAs in English waters:

The byelaws, which have been subject to extensive consultation with industry and other stakeholders, will come into force in two months’ time (13 June 2022).

They are being introduced using new powers under the Fisheries Act, the UK’s first major domestic fisheries legislation in nearly 40 years. The new measures will prohibit fishing activities in MPAs where there is evidence that they harm wildlife or damage habitats.

The four byelaws ban the use of bottom trawls, dredges, demersal seines and semi-pelagic trawls, collectively known as bottom towed gear, over certain areas. There are also additional restrictions in two of the sites preventing the use of certain static gears such as pots, nets or lines over especially sensitive areas.

“Outside the EU, we are using our new freedoms to protect our marine environment. We will be stopping trawling and dredging in these Marine Protected Areas to protect wildlife and habitats, through powers we have in our Fisheries Act 2020.”

“Many of our inshore marine protected areas are already protected through MMO and Inshore Fisheries and Conservation Authority byelaws.

“The Fisheries Act includes new powers allowing us to better manage and control fishing in our offshore Marine Protected Areas.

“These new byelaws represent the next step in our nature recovery journey, ensuring our marine life can recover and thrive.”

The first four MPAs were chosen as a priority to help protect their vibrant and productive undersea environments. They include the Dogger Bank Special Area of Conservation, which has the largest shallow sandbank in British waters and supports commercial fish species such as cod and plaice, as well as sand eels that provide an important food source for kittiwakes, puffins and porpoises. They also include the Canyons Marine Conservation Zone which protects rare and highly sensitive deep water corals.

The names of the byelaws are: