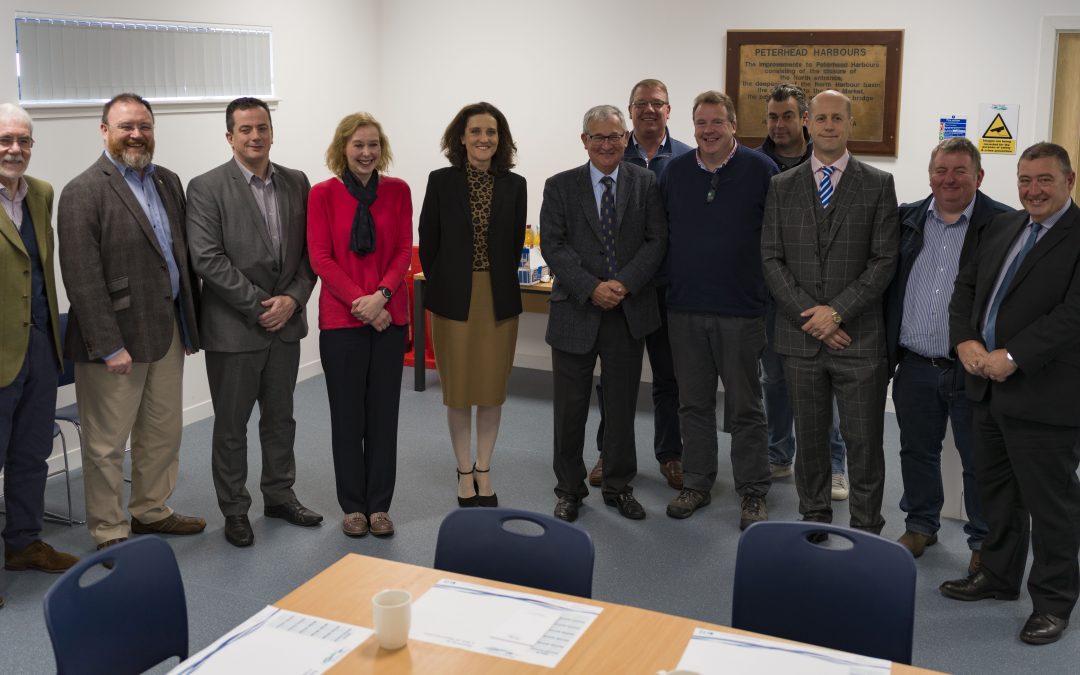 The Scottish fishing industry has united today (Thurs September 19th) to press ministers to maximise the opportunities for the UK outside the Common Fisheries Policy, including the rapid adoption of solutions to major practical problems that would arise for processors if no deal is reached.

Leaders of the catching and processing sectors used a meeting with Secretary of State for Environment, Food and Rural Affairs Theresa Villiers at Peterhead Fish Market to warn that if left unresolved, issues relating to costs of export health certificates (EHCs) and the capacity of local authorities to provide them, labelling of seafood produce and access to labour could prevent the UK benefitting fully from leaving the Common Fisheries Policy.

Elspeth Macdonald, chief executive of the Scottish Fishermen’s Federation, said: “The entire industry shares the goal of leaving the Common Fisheries Policy because this will allow the UK to determine who catches what, where and when in UK waters, and will lead to Scottish boats being able in future to catch a fairer share of the available quota from our own waters. This is the Sea of Opportunity.

“But without urgent action by the government to provide solutions to these very real practical problems facing the fish processors in a no deal scenario, this could threaten the uplift that the whole industry will get from the UK becoming an independent coastal state with the ability to manage its own fisheries.

“Any supply chain is only as strong as its weakest link, and the catching and processing sectors have a shared interest in seeing proper measures put in place to provide clarity and certainty to seafood processing businesses. That message was delivered very forcefully to Theresa Villiers today.”

Jimmy Buchan, chief executive of the Scottish Seafood Association, said: “With potentially only 40 days until the UK leaves the EU with no deal, the industry is facing a series of major impediments to the continued smooth export of seafood produce into the EU.

“Despite lengthy discussions and promises of solutions, the government has not been able to re-assure us that there will not be lengthy delays for trucks exporting fresh and live produce through Dover to Calais and a number of other routes onto the continent.

“Such delays because of issues around EHCs and labelling could be fatal for some of the smaller processors in our industry. In addition, the lack of a commitment to ensuring the sector will continue to have access to the EU labour pool is seriously hampering forward planning.

“Together with our colleagues in the catching sector, who also ultimately would be affected if trade is disrupted, we demanded fast action from Theresa Villiers today and hope to hear what is going to be done very soon.”