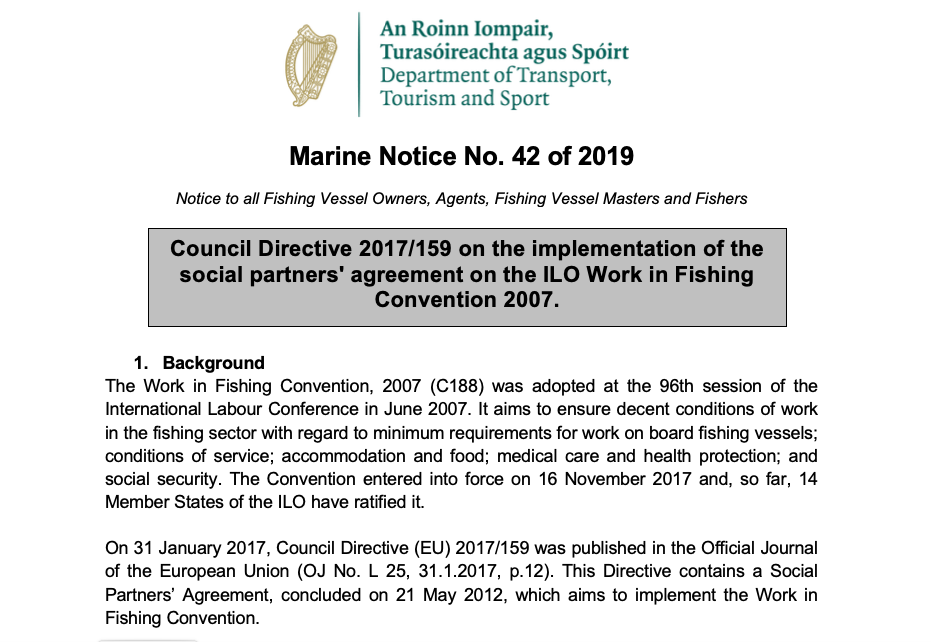 The Directive relating to the implementation of ILO188 in Ireland is due to be transposed into Irish law by November 15th. Currently, work is progressing on a package of regulations and subject to finalisation of those a number of changes will take effect on November 15th, with implications for boat owners, skippers and crews.

The Work in Fishing Convention, 2007 (C188) was adopted at the 96th session of the International Labour Conference in June 2007. It aims to ensure decent conditions of work in the fishing sector with regard to minimum requirements for work on board fishing vessels; conditions of service; accommodation and food; medical care and health protection; and social security. The Convention entered into force on 16 November 2017 and, so far, 14 Member States of the ILO have ratified it.

The Convention and Directive were the subject of a stakeholder consultation details of which are contained in Marine Notice 42 of 2018.

1. Objectives of the Directive

The Directive comprises seven articles and an Annex which sets out the Agreement concerning the implementation of the Convention. The Directive aims to enhance the working and living conditions for fishers working on vessels flying the flag of an EU member state. In particular, the Directive seeks to improve health and safety for fisher’s within the EU and establishes a consolidated legal framework suited to working conditions in the commercial fishing sector.

This Directive applies to all fisher’s (including share fishers) working in any capacity under a contract of employment or in an employment relationship on any commercial fishing vessel registered in the State. The Directive also results in additional responsibilities for fishing vessel owners, masters and the national competent authority. The competent authority for the purposes of the Directive is the Marine Survey Office of the Department of Transport, Tourism and Sport.

In some instances, the extent to which the provisions of the Directive apply to fishing vessel owners and masters varies depending on the size of the fishing vessel.

The Directive is due to be transposed into Irish law by 15 November 2019. Work is progressing on a package of Regulations in order to transpose the Directive. The purpose of this Marine Notice is to provide information on the main changes which will take effect on 15 November 2019, subject to the finalisation of the draft Regulations.

The following sections provide a brief overview of some of the main changes that will come into effect from 15 November.

Fishers who are 16 or 17 years of age may perform duties provided that they are no longer subject to compulsory full-time schooling, they have completed a basic pre-sea training course, their mental and physical well-being is fully protected and they have received adequate instruction.

A fisher who is 16 or 17 years of age may be permitted to work at night, if the work forms part of an established training programme.

Fishers on Irish sea-fishing vessels (other than Category C vessels which remain at sea for 72 hours or less, or which are less than 15 metres length overall), will be obliged to have a medical certificate from 15th November 2019. Details of the medical assessment scheme will be set out in a subsequent marine notice.

A fishing vessel owner or master shall not employ or continue to employ a fisher on board a sea-fishing vessel to which the Regulations apply, unless the fisher is the holder of a medical fitness certificate that records the fisher as fit to carry out the work for which he or she is to be employed, and that is in force.

To obtain a medical fitness certificate, a person must be medically examined by an approved doctor to ascertain if he or she is fit, having regard to the medical standards and eyesight and hearing standards specified by the Minister for Transport, Tourism and Sport. The list of approved doctors and details of the medical assessment scheme which currently applies to seafarers are available in Marine Notice 38 of 2014.  This Marine Notice will be updated to reflect the introduction of a scheme for fishers.

Owners of sea-going fishing vessels registered in the State, shall ensure that their vessels are sufficiently and safely manned for the safe navigation and operation of the vessel and under the control of a qualified skipper.

The transposition of the Directive will require some amendments to be made to existing regulations. Most notably, the table contained in S.I. No. 289 of 1988, which sets out the minimum number of qualified deck and other officers to be carried on board the vessel, is being updated to bring fishing vessels of 15 metres length overall (and above) into scope.

Fishing vessel owners and/or masters of sea-going fishing vessels registered in the State will be required to carry a safe manning document, which specifies the number and qualifications of the fishers required for the safe navigation and operation of the vessel, the protection of the marine environment and appropriate living and working conditions.

It should be noted that the changes being introduced as a result of Council Directive 2017/159 and its subsequent national regulations, do not apply to fishing vessels which have a safe manning document issued by the competent authority under the Merchant Shipping (Safe Manning, Hours of Work and Watchkeeping) Regulations 1998 (S.I. no. 551 of 1998).

Subject to the limit of an average of 48 hours of work a week over a reference period not exceeding 12 months, the limits on hours of work and rest in respect of a worker on board a sea-going fishing vessel shall be either:

– maximum hours of work which shall not exceed 14 hours in any 24-hour period, and 72 hours in any seven-day period; or

– minimum hours of rest which shall not be less than 10 hours in any 24-hour period, and 77 hours in any seven-day period.

Every fishing vessel shall carry a crew list, the particulars of which shall be determined by the competent authority.  Before or immediately after the departure of the fishing vessel, a copy of the crew list, or specific details of the crew list as determined by the competent authority, shall be communicated ashore, for the purpose of search and rescue and maritime safety.

A subsequent Marine Notice will outline the format to be used for the crew list.

The owner of an Irish sea-fishing vessel, who employs a fisher, shall ensure that an agreement is prepared which provides the fisher with decent work and living conditions. Amongst other things, the Fisher’s Work Agreement should include the fisher’s family name and other names, date of birth or age, and birthplace; the place at which and date on which the agreement was concluded and the name of the fishing vessel.

The Marine Survey Office will be revising the current log book format to take account of the fact that a significant proportion of information, which is currently contained in the log book, will now be contained in the Fisher’s Work Agreement.

Examples of when it is the fishing vessels owners duty to repatriate a fisher include:

The costs of repatriation shall be borne by a fishing vessel owner, except where the fisher has been found to be in serious default of his or her obligations under the fisher’s work agreement.

Sufficient and suitable food and drinking water should be provided to a fisher on board a sea-going fishing vessel registered in the State.

When a fishing vessel registered in the State, is at sea or in a port outside the State, the fishing vessel owner shall permit a fisher to seek medical attention, in the event of serious injury or illness and work-related illness or injury occurring to him or her, where reasonably practicable, without delay.

The fishing vessel owner is only responsible for costs arising which are not covered by existing entitlements to fishers under health and social protection legislation.