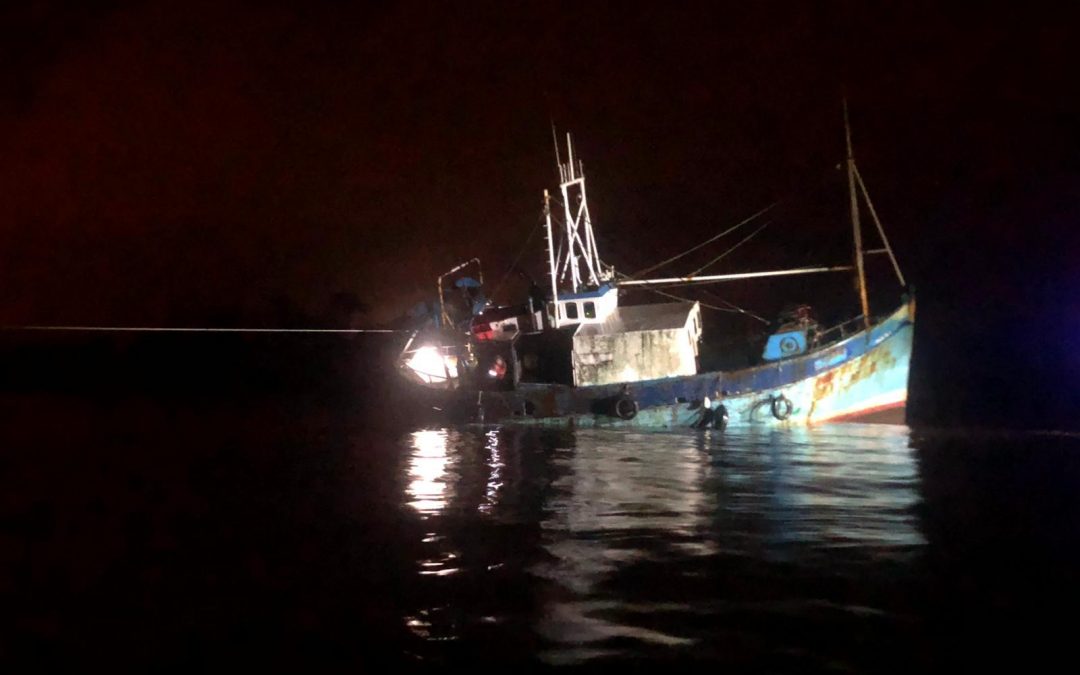 Donaghadee lifeboat was tasked at 2.44 am this morning (Tuesday, 18 August) by Belfast Coastguard to come to the assistance of a 15-metre fishing boat with one person on board.

The fishing boat, which was on passage from Ardglass to Mallaig in Scotland, ran into mechanical difficulties in the early hours of the morning and drifted ashore at Templepatrick, just south of Ballyvester beach.

The volunteer crew launched the RNLI all-weather lifeboat Saxon at 3.00 am and in flat calm sea conditions and driving rain made full speed to be on scene in less than 10 minutes.

As the stricken vessel was so far inshore with a falling tide, the daughter lifeboat was launched and crew members John Ashwood, Deputy Coxswain and Ross Bennett, Crew Member made their way to the fishing boat to assess the situation.

It was decided that they should attempt a tow, a towline was quickly established but the attempt was unsuccessful due to the tidal conditions.

After liaising with Belfast Coastguard and the fishing boat’s skipper, the decision was made that the best plan of action would be for the lifeboat to return when the tide had risen. The lifeboat and crew returned to station at approximately 04.15 am.

After a couple of hours sleep, the lifeboat crew then relaunched at 8.00 am and in similar conditions made their way back to the fishing boat at Templepatrick.

They were able to go alongside as the tide had risen sufficiently, the same two crew members were transferred along with a salvage pump and towline. 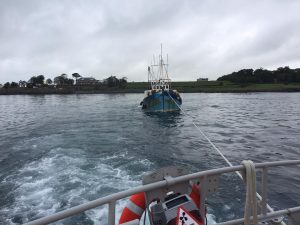 The tow was established while the salvage pump removed any excess water, and the boat was towed off the rocks stern first. The tow rope was then transferred to the bow of the vessel, and an assessment was made to ensure there was no damage to the hull.

Saxon then proceeded a slow tow to Bangor, while waiting for permission to enter the harbour, the lifeboat went alongside the vessel and transferred the lifeboat mechanic who was able to assess the mechanical difficulties and restart the fishing boat’s engine.

After discussions with the skipper and the Coastguard, agreement was made that the vessel, now being under its own power, was able to proceed onwards to Mallaig.

The lifeboat returned to station at approximately 2.00 pm and made ready for the next call out.

Philip McNamara, Volunteer Coxswain, Donaghadee Lifeboat said, “We would just like to thank our volunteer crew members for being so quick to come to the assistance of this fishing boat and of course their willingness to return again a few hours later and lose part of their days work, so a thank you to their employers for their flexibility.

“We all wish the skipper and his boat safe onward passage to Scotland.”