EU: Women in Fisheries and the new Control Regulation 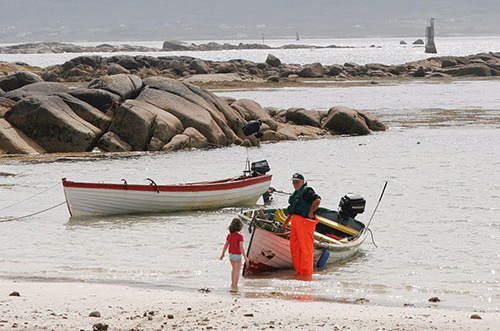 why is nobody asking them what they think?

The new Fisheries Control Regulation currently before the European Parliament’s PECH Committee aims to be “simple, transparent and effective”, according to Spanish MEP Clara Aguilera, the Rapporteur in charge of this file. In practice, the new Regulation will require the phasing out of paper-based recording (such as paper logbooks) so that recording and reporting of fishing activities eventually move to digitised ‘fully documented fisheries’, irrespective of vessel size. The thinking is that this will make for better communication between Member States and with the Commission, and result in a more efficient and effective control system. The Regulation is supposed to be technologically neutral – in other words, it should not prescribe the use of any specific technology to achieve its aims.

During the two hour discussion between Fisheries Committee MEPs on Thursday 30 April, the majority of contributing MEPs expressed concern at the disproportionate impact the Regulation will have on small-scale fisheries. They emphasised the need to understand the on-the-ground realities of small-scale fishing, the need for support (financial and training) for the additional administrative and financial burdens, a concern that digitisation (such as the electronic logbook) will impose undue burdens on small-scale fishers (SSF) who were already under huge pressure, even before the global pandemic.

There was, however, no discussion around the practical realities of who exactly will be coping with the burden of these changes to current operating procedures with the introduction of new digital tools and software to successfully report catch and to comply with the landing obligation.

The large majority of fishing vessels in Ireland (86%) and in the EU (75%) are classified as small-scale (under 12m in length and using non-towed gear). Most of these are family-run operations with women in small-scale fishing families playing important (often unrecognised) roles that ‘keep the show on the road’. It is, by and large, women who take responsibility for administrative and logistical tasks related to the fishing operation. The material realities of small boats mean that they may not have a closed cabin where it’s feasible to use a mobile phone if weather conditions change, internet access at the fishing ground may be patchy or non-existent so that it may not be technically possible to report until ashore, small crews and solo operations may not have capacity to do anything other than the physical work of catching and hauling, older fishermen who don’t have capacity for digital learning (even with training) will need to rely on family support. Even for those fishermen who are tech-savvy, women in small-scale fisheries will, in many cases, be the ones to figure out how to use the technology and teach it to those going fishing.

“There’s a reason that I do nearly all of the paperwork – there is zero capacity for the fishermen to do anything other than the physical work of catching and hauling. That’s also taking into consideration that there are two of us on board for our operations; several fishermen we know operate solo and simply don’t have the spare hands to do anything other than what they’re already maxed out doing.” highlights Keara Osborne, Iasc Inis Oírr.

The new Fisheries Control Regulation is therefore likely to directly increase the burden on women in small-scale fisheries. While there was much discussion at the PECH Committee around the need to ‘take on board the sector’s concerns’, to ‘create trust and confidence in the industry’, to ‘explain and listen to the sector’, nobody mentioned asking the women in small-scale fisheries what their needs and concerns will be. Nobody suggested that they should be included in the training that will need to be delivered.

Recent research highlighted by The Skipper in the May issue (available here) found that Sustainable Development Goal (SDG) 14 (Life Below Water) will not be attained if 50% of the population it affects (i.e. women in fisheries) are not taken into consideration. The research attributes various aspects of marine resource mismanagement to overlooking the essential roles played by women in fisheries. It seems highly probable that the achievement of the aims of the new Fisheries Control Regulation (an integral part of fisheries management) might be similarly impeded if nobody is thinking about the role that women in small-scale fisheries will likely play in implementing the requirements of the new system on a day to day basis. There appears to be an unspoken assumption that legislation to control practices on fishing vessels will only impact those who are in the vessels, which ignores the wider implications for fishing families and, in particular, for women in small-scale fisheries.

On a practical level, this means that, in consulting with and listening to ‘the industry’ and ‘the sector’, there should be a real effort to engage, in particular, with women in small-scale fishing families around the practicalities of the new Fisheries Control system, including organisations that represent women in fisheries, where they exist. A good place to start could be to engage with the AKTEA European network of Women in Fisheries to ensure that the new system is gender-sensitive. As detailed in the April issue of The Skipper, this network was recently relaunched and revitalised in Brussels in a three day event that brought together more than forty women in fisheries from Ireland, Italy, Croatia, Malta, Cyprus, Spain, the Azores, France and The Netherlands. (For more see here).

The members of the AKTEA network include independent national and regional level organisations that represent independent fisherwomen, and wives and partners of fishermen, involved in fish processing, sales and administration, fishing (in boats and onshore), shellfish gathering, and net mending. If the European Commissioner for the Environment, Oceans and the Fisheries is serious about his commitment to valuing and supporting women in fisheries (as stated in his video address to the AKTEA representatives in Brussels), there needs to be concrete evidence of this, through gender sensitivity to the impact of legislation, such as the new Fisheries Control Regulation, on the small-scale fishing communities and families behind the vast majority of EU and Irish fleets.

The CO-SUSTAIN project (www.belongingtothesea.com) has received funding from the European Union’s Horizon 2020 research and innovation programme under the Marie Skłodowska-Curie grant agreement No 789524