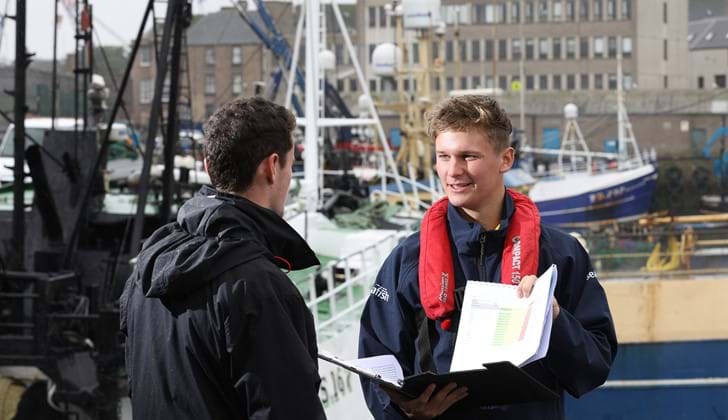 Seafish calls on the UK’s fishing vessel owners and skippers to take part in their annual survey of the UK fishing fleet which will begin in Peterhead, Scotland on Monday 11 July

Seafish researchers will be heading to fishing ports around the UK this summer as part of the annual UK Fishing Fleet survey which kicks off today (11 July).

The survey asks socio-economic questions of fishing businesses around the country. Questions include enquiries about businesses’ financial performances and crew demographics. This gives owners and skippers the chance to share how their business has fared in the last 12 months and helps paint a picture for policymakers of the challenges the fleet faces in an ever-changing political and economic landscape.

The interviews take no longer than 15 minutes to complete and all responses are treated as strictly confidential, with no figures from any individual vessel revealed in any outputs.

Outputs from the 2021 survey, including the Employment in the UK Fishing Fleet report and Quay Issues Magazine are already available on the Seafish website, with more to be added in the coming weeks.

As well as contributing to these major industry publications, fishing businesses who take part in the survey can also request a free benchmark report. This compares their vessel’s economic performance to similar vessels which can help identify areas where improvements can be made. They can also be used as evidence in grant or loan applications.

“The UK fishing fleet survey is a vital piece of research that explores the health of the sector, covering its economic challenges and deeply important social impact on the communities built around it. The results are essential in helping government understand where costs are changing, how businesses are really performing and what is charting its course.

“We would encourage as many fishing businesses and vessel owners as possible to take part in this years’ survey, so that every voice can be heard and represented in our confidential evidence sharing with government.”

Representatives from across the UK industry have called on businesses and vessel owners to take part in the survey.

“All forms of data are required to carry out a successful business. Economic data is perhaps the most crucial of those. More recently with the Scottish Government, I’ve used Seafish economic data to put a case forward with others for funding for the fleet. That’s the fourth time in the last decade I have done that. And without that data, it would have been difficult to create that argument.

“So I would encourage every skipper out there, every owner out there, to allow Seafish to come in and harvest your data.”

Field researchers this year will include some faces which are now familiar in ports around the UK, as Juan Carlos Paredes Esclapez and Oscar Wilkie return for their fourth year. Fresh faces will also be in the mix with Rebecca Spain, Euan Newgreen, Sheriene Murphy and  Udara Nagodavithana  joining the Seafish survey team.

Want to get involved in the survey?

Vessel owners and skippers who are willing to participate in the fleet survey should email fleet.survey@seafish.co.uk with their:

This will allow Seafish researchers to arrange a meeting a meeting with participants in port or by call.

If you have questions about the survey or enquiries about how industry estimates could be used to support your business, please contact the Fleet Survey team on fleet.survey@seafish.co.uk or 07870 894 035.

Further information is available on the Seafish website: seafish.org/fleet-survey