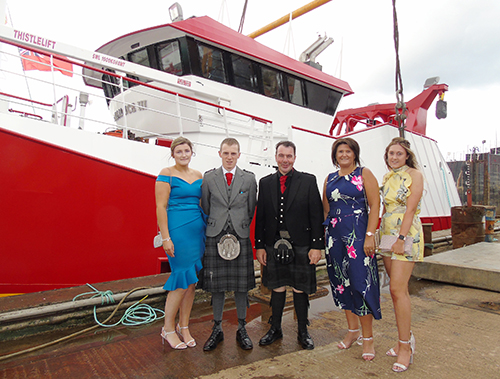 This month saw the latest build by Parkol Marine, Reliance III, launched and handed over to her new skipper/owner, Banff fisherman John Clark.

The Reliance III replaces the 2009 Parkol built Reliance II which was preceded by the original Reliance built by MacDuff in 1988.

The wheelhouse electronics were supplied and installed by Woodsons and feature 3 X 55” split screen monitors so John will not miss a minute of his beloved Formula 1 Grand Prix racing when at sea.

Designed as a versatile single / twin rigged trawler Reliance III will target whitefish and prawns using a selection of scraper trawls made and rigged by John and his son, relief skipper David Clark and a set of gear from Strachan Trawls.

John Clark worked closely with Ian Paton of SC McAllister & Co Ltd and Parkol engineers to bring to fruition some ideas gained from experience on his previous vessels to enhance stability and crew safety as part of the new build.

The Reliance III has a round bilge hull, transom stern, soft nose stem and bulbous bow with a more flared forepeak than her predecessor for a smoother ride in rough seas. She has a full length shelter deck and John requested that any unused free space on the decks be moulded over for comfort.

Crew safety was a primary concern with the design of a innovative new safety rail, highlighted in bright yellow paint, that encircles the top of the shelter deck and stern rails with an additional safety rail aft of the net drums. This enables the crew to clip on their safety harnesses when shooting or hauling back and provides an extra level of security to the crew when working topside.

Another feature to the build was the placing of the 6 fuel tanks with 2 located forward by the fish room and 4 midships by the engine room so with constant trimming as the fish room fills during a trip, the vessel will obtain optimal stability and remove any lists during rough weather.

John also worked with his machinery supplier Thistle Marine to design a new protection mesh guard system for the boat’s 33 tonnes – three barrel winch which when fitted topside reduces the possibility of crew getting entangled during fishing operations. The winches also utilise a new hydraulically actuated braking system linked to the trawl console in the wheelhouse which is a first of its kind for Thistle Marine. The dog clutches and dogs can also be removed without stripping the winch for ease of repair and or renewal.

Parkol Director and Project Manager Sally Atkinson told The Skipper, “During the build of Reliance III Parkol faced one of its most challenging times when the COVID-19 pandemic forced us to temporarily close the yards. However, when we could safely return to the yards we pulled out all the stops to ensure we would deliver Reliance III on time. It was a pleasure working with John and his team, and we’re very proud of the feedback we have had from him. We wish him, his family and crew much success and safe fishing.”

At the handover Parkol Director, Andrew Oliver presented a scale model of Reliance III, made by Ron Harker, to skippers John and David Clark.

Speaking to The Skipper after the launch, John Clark was full of praise for the Parkol team:

“The way the Parkol workforce reacted to the pandemic lockdown was unbelievable. From rotating the staff working on the boat and the sanitization of areas on a regular basis they kept the build on schedule when other industries were still shut down.

“They went above and beyond to give us the quality boat we dreamed of and myself, my family and crew will always be grateful for their dedication and commitment.”

As a mark of his gratitude to the yard workers John commissioned a signwriter to incorporate the Parkol name into a logo on the sides of the wheelhouse and had a tribute plaque designed and cut on a CNC machine to be displayed beside the helm console.

The Skipper wishes John, David and crew good fishing and calm seas with their new venture. 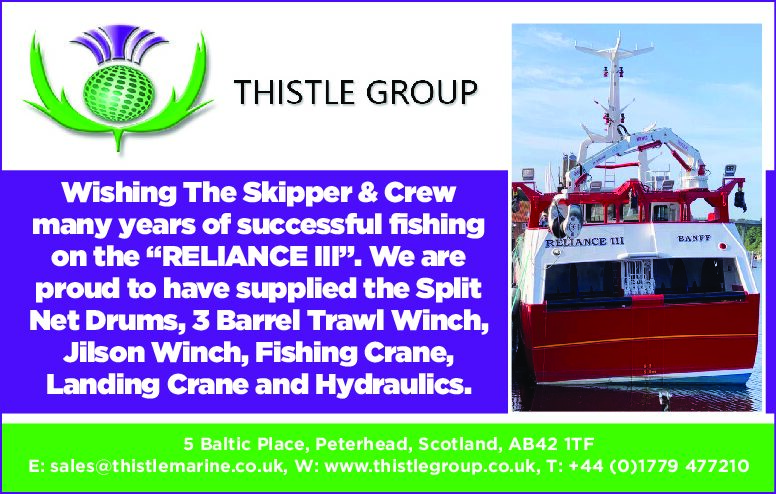 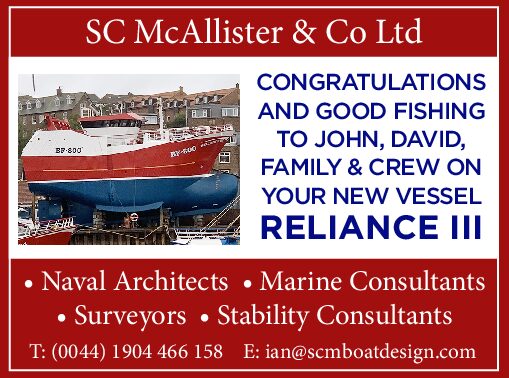 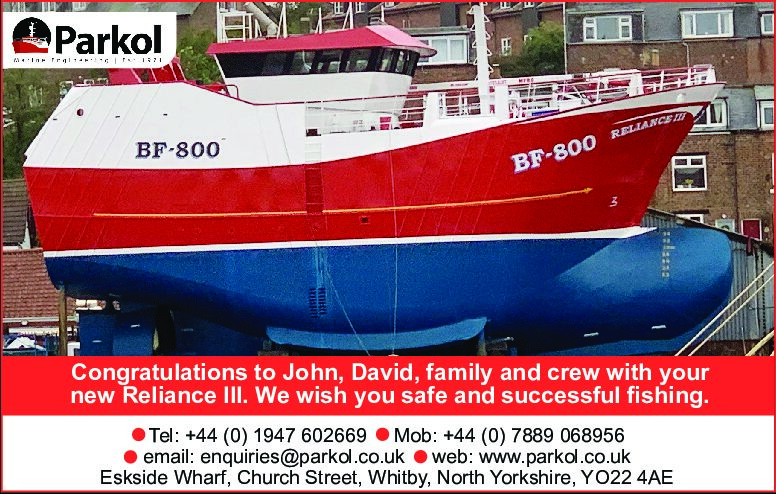 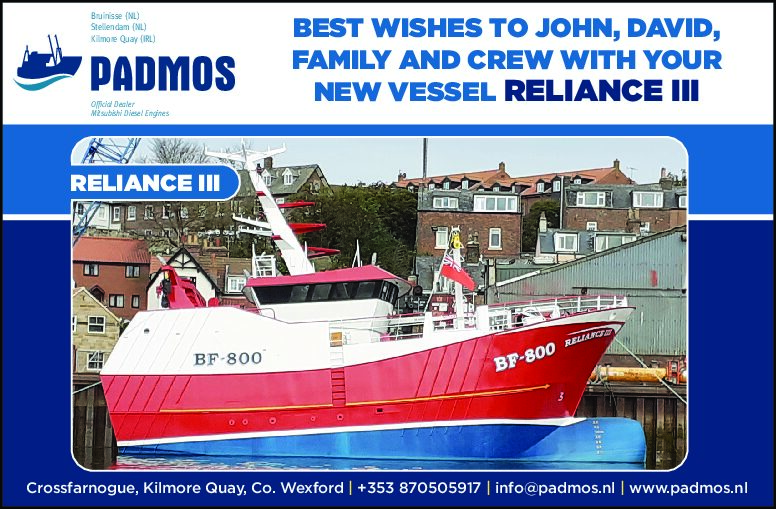 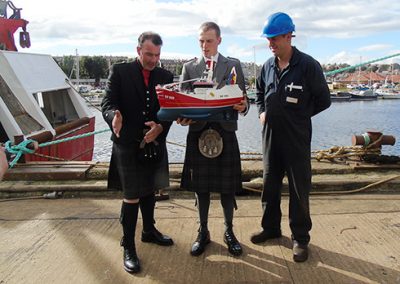 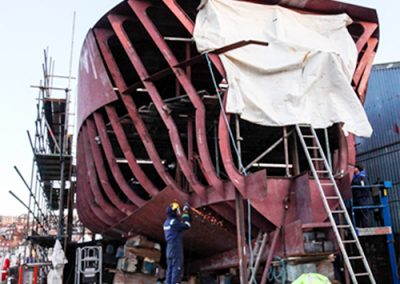 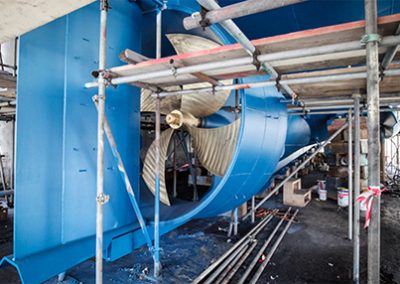 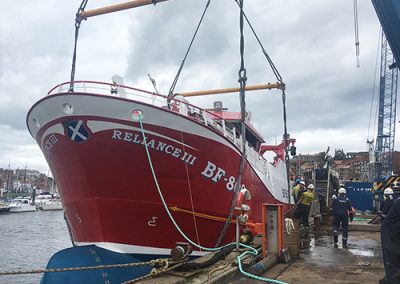 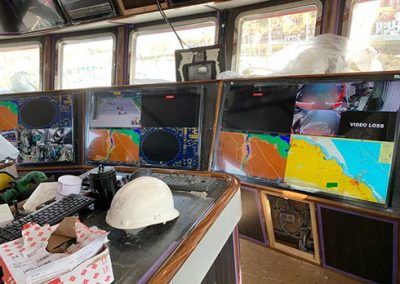 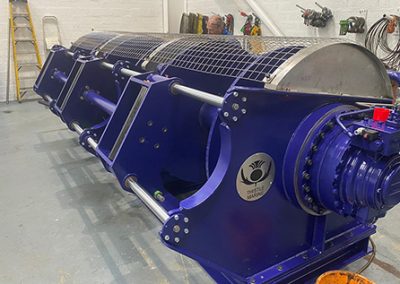 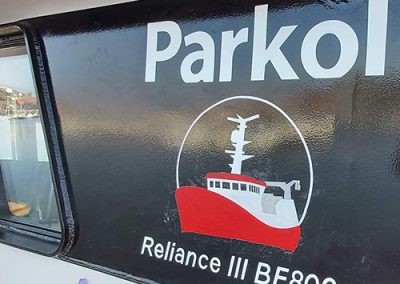