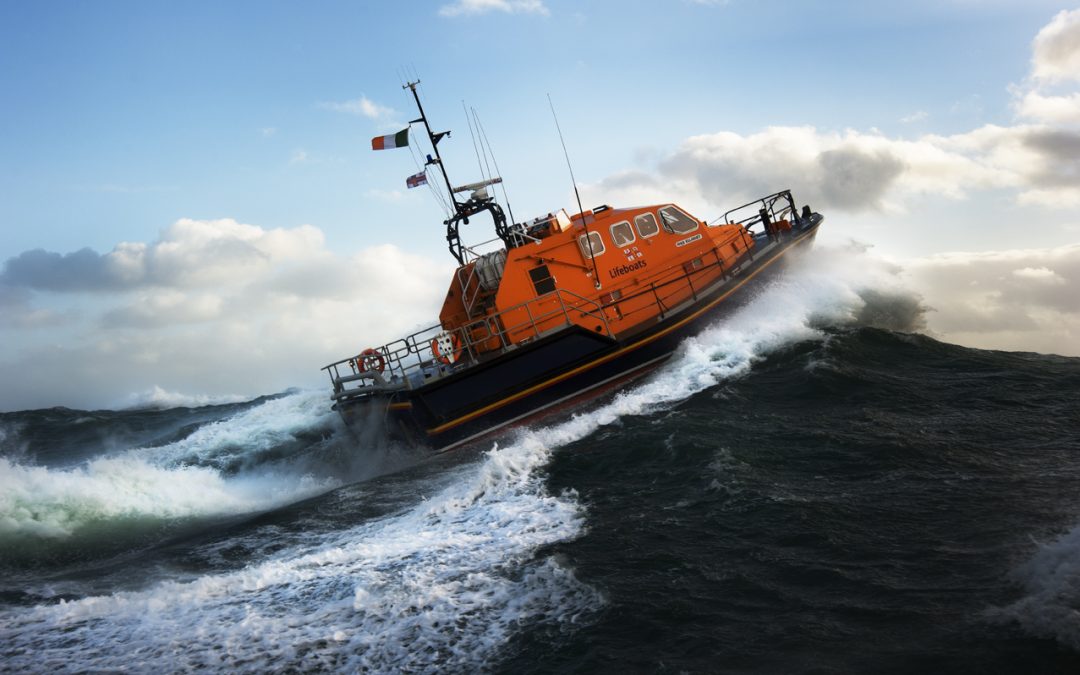 The RNLI is encouraging people to help save lives at sea and on inland waters by fundraising at home for its annual Mayday fundraising appeal.

The RNLI’s Mayday campaign normally sees people taking part in group fundraising events around Ireland but, due to the Coronavirus pandemic, the lifeboat charity is taking the campaign online. Broadcaster, comedian and Dun Laoghaire RNLI volunteer PJ Gallagher is backing the RNLI’s Mayday appeal and urging people to get creative for the lifeboats and raise funds from home.

Although the country is staying at home for now, the charity’s volunteer lifeboat crews are still on-call 24/7, ready to drop everything when their pager sounds, to save lives at sea and on inland waters.

Irish lifeboat crews have been on rescue missions during the restrictions and are fully operational. The charity is calling on the public to help raise funds for its vital lifesaving service by getting active and joining a step count challenge, having a cuppa for the crew or taking the H2only challenge for its online Mayday appeal.

To get people in the mood, a Dublin RNLI volunteer crewmember is making the best of the lockdown which has seen his gym close, by throwing his weight behind Mayday. Howth RNLI crewmember and owner of Toned Fit gym, Ronan Murphy, is going to help members of the public get active and make their steps count for Mayday.

The crewmember will be sharing his session online on Howth RNLI’s Facebook page with other stations being asked to join him in the challenge. He has also extended PJ an online fitness challenge to encourage others to get involved and to have a little fun for Mayday while they are stuck inside. Ronan’s gym normally holds a Mayday fundraiser to lift the weight of a RNLI all-weather lifeboat to raise funds.

Commenting on the RNLI’s Mayday campaign, PJ Gallagher said: “It is difficult for charities at the moment as the current restrictions mean that we can’t support them in the usual way. The RNLI is very close to my heart as I know first-hand the work they do and it is an incredible feeling to be able to save a life or help someone in trouble on the water, knowing that you have been provided with the proper kit and training to do it.

“The RNLI have had to move Mayday online and I hope that people will follow them there.  There are plenty of ways to raise funds and I am going to take up Ronan’s fitness challenge, to show how easy it is to raise funds for the RNLI and keep fit in the process.

“The ‘Make Your Steps Count for Mayday’ is just one way to fundraise and rnli.org/mayday has more suggestions. If you don’t feel like getting active you can simply donate online at rnli.org/mayday and feel good about it.”

RNLI Fundraising Manager Danny Curran says: “Our Mayday fundraising campaign is a vital event in the RNLI calendar and given the current situation it is more important than ever.

“For years, our fantastic fundraisers have given their time and energy in May to help our lifesavers. But the welfare of our volunteers, staff and supporters is our priority, and the usual range of activities are now impossible. So, this year, Mayday will look a bit different.

“While many fundraising events and gatherings have been cancelled, our lifeboat volunteers are still responding to their pagers and launching in lockdown. So, we are encouraging our supporters to take on fundraising challenges at home. That way they will be able to help protect our lifesavers, while also keeping themselves and others safe.”

Visit RNLI.org/Mayday to find downloadable materials for all Mayday activities, get involved with our challenges and do something amazing from the safety of your home this May.