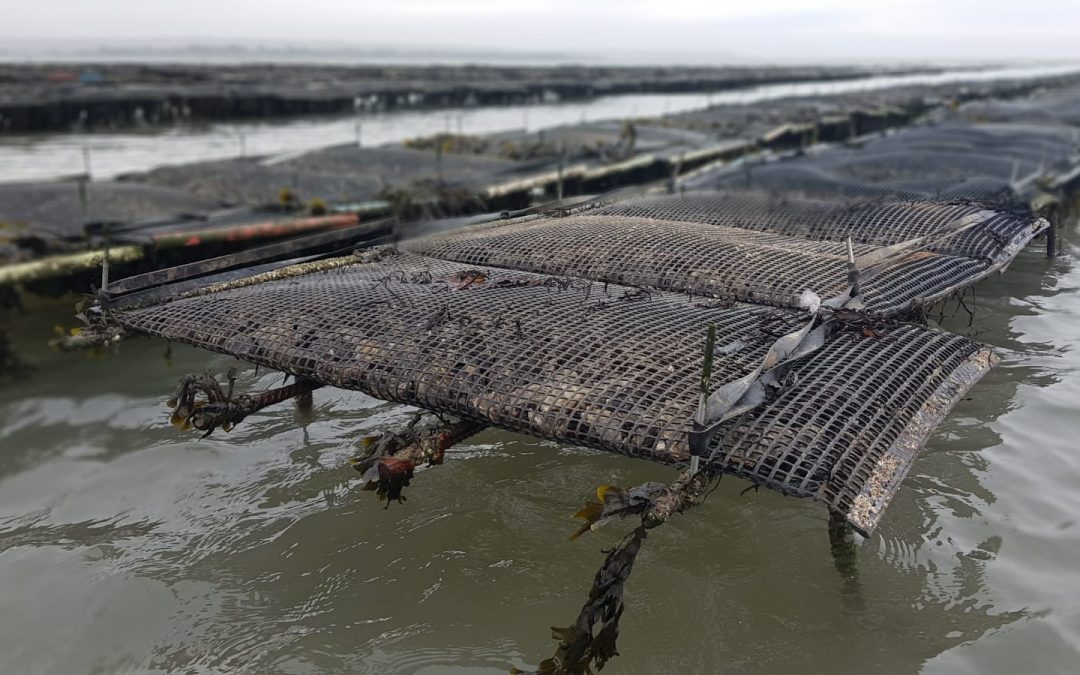 “There has to be a different way of thinking about how we put something together that deals with this current crisis. It’s temporary, it’s going to be relatively short-lived in the scheme of things. So it has to be quick and easily accessible and it has to apply to the majority and not have criteria in there that would rule out people”.

With seafood markets globally reeling from the impact of COVID-19 and measures that have been implemented to slow the spread of the virus, Ireland’s aquaculture producers have been left struggling just like other operators in the fishing industry.

Unlike the catching sector, however, the culture sector faces the sector-specific pressure that while the sea may well be the best place to store wild fish, the option of leaving farmed fish or shellfish in a pen or on a trestle is less of a promising prospect (for the fish, if not for the people who fish) than a possible repeat of the First World War’s ‘Great Fishing Experiment.’

In terms of the difficulties now facing the sector, a broad submission made by the Irish Farmers’ Association (IFA) to both the Irish Government and the EU Commission on March 30th says with market closures and disturbances causing unprecedented levels of disruption, Irish aquaculture is experiencing a severe and unexpected impact due to the pandemic.

Among some of the challenges now facing the sector are impediments to carrying out normal production activity, drastically reduced demand, and logistic difficulties in terms of accessing those markets that are open. Spiralling transport costs, particularly for airfreight, are proving exceptionally challenging, they say.

In terms of markets, the IFA highlights COVID-19 has caused major closures and disruptions, with the restaurant and foodservice sector now practically closed across both domestic and European export markets. Much like the catching sector, the culture sector displays a high dependence on the latter.

According to the IFA, over 60 per cent of the decrease in sales of all aquaculture produce is due to market loses in the foodservice industry in the UK and Europe. Some aquaculture producers, says IFA Aquaculture Executive Teresa Morrissey, are now experiencing 40-70 per cent losses in turnover compared with the same period last year.

Early market losses in China and Hong Kong means the Irish oyster industry—valued at €43million and employing some 1,300 people—has been particularly hard hit by the crisis since the start of the year, and has already suffered considerable losses.

According to BIM’s 2018 ‘Business of Seafood’ report, France—which on March 14th went into lockdown, closing all non-essential businesses, including restaurants and cafés—remains Ireland’s largest export market for oysters. In the last number of years, China has accelerated into second place as an export destination for the sector’s luxury offering – an offering that now finds itself with little or nowhere to go, or rather nowhere worth going.

Though retail demand has shown signs of increasing for some products—salmon, for instance—switching to retail is not straightforward for niche products like fresh oysters and mussels, leaving the bulk of the almost 2,000 individuals working in the sector, much like those mostly small inshore boats in the catching sector who target shellfish, facing a highly uncertain future, with more challenges looming. 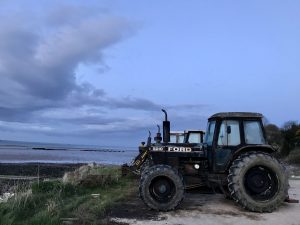 According to the IFA, the knock-on effects coming down the line on account of these impacts, which will mean significant issues regarding stocking density on aquaculture sites due to being unable to harvest, makes stock management the biggest challenge posed by the crisis to the sector. “Growth of the fish and shellfish can be slowed down but not halted. Increased stocking density has an initial impact on fish/shellfish health and welfare but also builds up a potential price collapse risk for once the markets are fully open again,” they highlight.

Echoing this, a letter from Javier Ojeda, Interim General Secretary of the Federation of European Aquaculture Producers (FEAP) in March to the EU Commissioner for Environment, Oceans and Fisheries Commissioner, Virginijus Sinkevičius, states the sector has a range of specificities that make it particularly vulnerable to the current situation – among them, the fact that producers work with live animals in captivity and under their responsibility.

Consequently, producers must continue to feed and care for those fish or shellfish regardless of the market’s demands (or rather lack thereof), meaning temporary closures and operational stoppages are not feasible options. For similar reasons, driving down operating costs is equally challenging. According to representatives, these specificities are something the European Commission has been slow to grasp, in terms of designing supports for the sector to help mitigate the crisis now unfolding.

Nonetheless, incremental supports, a number centred on amendments and the addition of flexibilities to the rules of the European Maritime and Fisheries Fund (EMFF), have been forthcoming (for both catching and culture sectors) at European level. The Commission on March 13th announced the Coronavirus Response Investment Initiative, which has since been adopted and came into force on April 1st. March 19th saw the adoption of new State aid rules which enables Member States provide relief to operators through national funding in the form of grants or tax advantages up to a level of €120,000 per undertaking.

Additional measures announced by the Commission on April 2nd as part of the Coronavirus Response Investment Initiative Plus, and since adopted with various amendments, allow for support to producer organisations for the temporary storage of products, and the payment from EMFF funds of financial compensation to aquaculture farmers, among other measures.

Though imperfect in places, by and large, the measures put in place in Europe have been welcomed as much needed steps in the right direction by representatives of the sector here. Despite this, thus far, just like the fishermen, the sector has been left waiting at national level.

In a letter sent to the then Minister for Agriculture, Food and the Marine, Michael Creed, dated March 26th, among other measures, IFA President Tim Cullinan called for the redirection and distribution as financial aid for the sector underspends of existing funds, and for the simplification of the administrative procedures to access funds.

Core among a detailed set of proposals on March 30th to the Government and Commission from the IFA, was a call for amendments to the EMFF that would allow for funds to be redirected and distributed as financial aid for the aquaculture industry to help them deal with the crisis.

A letter to the Minister dated March 20th highlights the progress review of the current EMFF operational programme predicted an underspend of as much as 65 per cent of the ‘Sustainable Aquaculture Scheme’ by the end of this year, and requests these be redirected and distributed as financial aid to the industry.

Before the adoption of most recent measures from Europe, many of these calls were prospective. Speaking to The Skipper at the end of March, Teresa Morrisey explained that once the Commission had granted the necessary amendments and supports it would be “over to a national battle to try and figure out how we’re going to do that.”

Now a reality, dissatisfaction has been rising as to the supports that are now being offered (or rather not offered), as a consequence of that “battle”— that is, the one which by many accounts never really began. Minister Creed has come under particular fire for his stance regarding storage aid as the single most viable option for the fisheries sector, in general.

According to the Department, almost all Ireland’s EMFF funds have been ‘allocated’. Minister Creed, they say, however, is actively reviewing all funding allocations, including allocations for all projects and events that have already been cancelled or postponed, to determine the scope for reallocation of funds for COVID-19 mitigation.

No figures, to date, have been forthcoming. IFA Aquaculture Chairman Michael Mulloy says that due to an existing EMFF underspend there is considerable money available to deal with the crisis.

Referencing that various amendments to the rules of the EMFF have been introduced which allow for the implementation of support measures, Mr Mulloy has stated “The measures allow for financial compensation to be granted to aquaculture farmers and processing enterprises for the temporary suspension and the reduction of production and sales, or for the additional storage costs”.

“These support measures and amendments to the EMFF Regulation now have to be supported at national level. I am calling on Minister Creed to implement the regulatory changes with immediate effect,” he said.

“Due to an underspend of existing EMFF funds, there is considerable money available to deal with this crisis.”

To date, the aquaculture sector has not heard from the Minister, though representatives say the Department has signalled a willingness to listen to alternative proposals, which IFA Aquaculture are currently working on.

In terms of storage aid as a solution worth spending those funds that do exist on, while suitable for some, for the vast majority of the sector is something of a non-solution, says IFA Aquaculture’s Teresa Morrissey. All options, she says, need to be explored, and any scheme or financial package, for both fisheries and aquaculture, has to be inclusive, broad and wide-reaching.

Highlighting that we long ago left normal, she says any scheme put in place needs to account for that. “Any scheme we’ve had before was for the development of or the sustainability or development of aquaculture. Developing the sector. This is for survival. So the criteria can’t be the same,” she says.

“There has to be a different way of thinking about how we put something together that deals with this current crisis. It’s temporary, it’s going to be relatively short-lived in the scheme of things. So it has to be quick and easily accessible and it has to apply to the majority and not have criteria in there that would rule out people”.