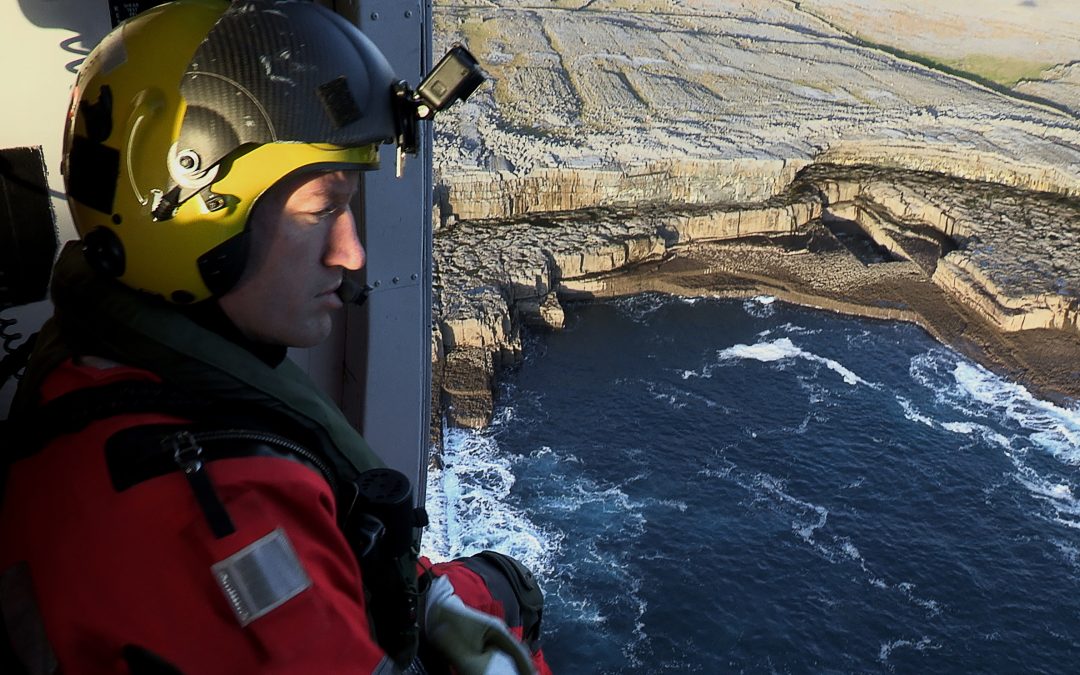 Between September 2016 and March 2017, the Irish Coast Guard suffered the loss of one volunteer, the first to die in service, and four helicopter crew – two were never recovered. Despite these devastating losses, the entire Coast Guard community continues to operate 24/7 with one aim – to save lives.

Storied by members of the Coast Guard in their own words, a new hour-long documentary about the Irish Coast Guard airs this Wednesday night (March 4), at 9.30pm on TG4.

Reaching into the heart and soul of the Irish Coast Guard, in the aftermath of the loss of R116 and Doolin volunteer Caitríona Lucas, the documentary explores how members keep going in the wake of such tragedies.

Produced and directed by Darina Clancy, who also shot TG4’s fishing documentary which aired last January, An Garda Cósta – Ár n-Insint Féin by Midas Productions is the latest episode in TG4’s Tabú series, which offers an uncompromising look at lesser spoken of topics in Ireland today.

Personal accounts reveal the anguish of the R116 search, along with the coping mechanisms of the ‘the Coast Guard family’. Intimate interviews at Valentia communication centre, local volunteer stations and helicopter bases illuminate how members contributed to the search and how they dealt (and deal) with their own grief.

Featuring live incidents, crews reflect on the agony of the search as well as the most dangerous, challenging, stand out calls in their careers – including one where a winchman almost lost his own life.

Revealing the dangers of the job while highlighting the rigours of their training and how members stay on the right side of risk, the documentary also captures the ‘downtime’, and the humour and camaraderie which is paramount in the teams and carries them through.

As nature battles with humanity, these Coast Guard teams—who unquestionably give their time, leave their families behind, and put their lives at risk to save others—have seen tragedy and triumph. It’s their organisation explained in their words from their perspective.

Filmed over a shorter period than she would have liked, on account of delays that cropped up, speaking to The Skipper filmmaker and storyteller Darina Clancy explained that initially it had been intended that both the fishing and Coast Guard documentaries would be produced side by side. However, work on the latter didn’t begin until last September.

Straight away, Darina says, this was a challenge – the Coast Guard’s busiest season was over, and winter drawing in meant filming with shorter daylight hours. However, adapting to the situation she battled on, while also carefully navigating the fact that she was filming at a time when the investigation into the 2017 R116 crash off the Mayo coast was still very much live.

While in the thick of it, publication of the Air Accident Investigation Unit (AAIU) report into the crash in which four crew members—Captain Dara Fitzpatrick, Captain Mark Duffy, winch operator Paul Ormsby and winchman Ciarán Smith—lost their lives, was delayed pending a new review at the request of “a stakeholder”.

This was the first time an AAIU report has been referred to a review board in the AAIU’s 25 year history. All of Darina’s work on the documentary had to be conducted strictly outside of the scope of the AAIU.

Asked about the value of observational documentaries, of the kind we are becoming accustomed to seeing from Darina, in terms of understanding people’s lives, institutions or particular topics, she says, “There’s a refreshing honesty to documentaries like those in the Tabú series.

“Sometimes that honesty, in and of itself, can present a set of challenges, but for the most part, the gloss or perception of a job, situation, institution can be presented in the media as one way, when in fact living in that situation is very different.”

In contrast, the honesty of the everyday, she says, allows people—both those contributing and those watching— to connect on a very personal and human level. Documentaries like these, she says, allow people to breathe and tell their stories in their own way.

“With regards the Coast Guard, I firmly believe that the audience needs to see how much they love doing what they do – how professional they are, how dedicated they are, how passionate they are.

“No matter what system they work under, at the end of the day they are at the frontline trying to bring someone to safety, in an island where we still do not understand the ferocity of the sea sometimes.”

The sheer vastness of what members of the Irish Coast Guard do, Darina thinks, is underestimated. It’s not just the guys up in the helicopters, she says.

“Sitting with the guys in Valentia is a master class in marine information and communications, and somewhere I’d happily hang out for weeks! The stories they have are just amazing.

“The various volunteer groups scattered along our vastly changeable coastline, depending where you are, are remarkably well-trained people”.

Discussing her motivation for making the documentary, she highlights, “Unlike some other countries, the Irish Coast Guard is not a law enforcement service. One of its key aims is to answer maritime distress calls.

“So, when volunteer Caitríona Lucas passed away it was harrowing. It was a team of people now out looking for their own. Equally so with the crash of R116.

“I just couldn’t imagine the resilience they had to find to keep looking. To keep flying.”

Asked about the importance of the camaraderie underpinning the everyday of the Coast Guard, Darina reckons it’s vital. “It’s the glue that holds them all together.”

“They really are the epitome of what teamwork is, to me anyway. The way they work is phenomenal,” she says.

“Their sense of humour is integral to what they do. What they have collectively seen and done and do, is what the rest of us don’t have to, because they do it…”

In terms of the highs and lows of filming, Darina says, “There were so many high points (no pun intended). The logistics were tough, managing cameras on an aircraft, learning how to behave on the aircraft, but I became very comfortable—never complacent—but comfortable very quickly. But I had great teachers to be fair!”

Highlighting that, much like the fishing documentary, there are no second takes—you either get the shot or you don’t—acceptance, she says, into the ‘Search and Rescue (SAR) family’ was a privilege. “The volunteers are amazing people,” she says.

“Obviously there were times when it was quite emotionally demanding. But most of all it was about gaining the trust of everyone. Some people did not want to take part which is always very understandable. That has to be respected.

“The news media were particularly tough at the time of both accidents. For me, this was giving the people that were actually surrounded by the circumstances a chance to say what they were going through – while continuing to serve.”

With filming and editing now over, what’s next then for Darina?

“It will be difficult after the last 12 months to be back on dry land having been at sea and in the air – I might have to use a tripod again!!” she says.

“But there are so many maritime stories to be told in this country. So many. It’s about getting them funded now – because the stories are there.”