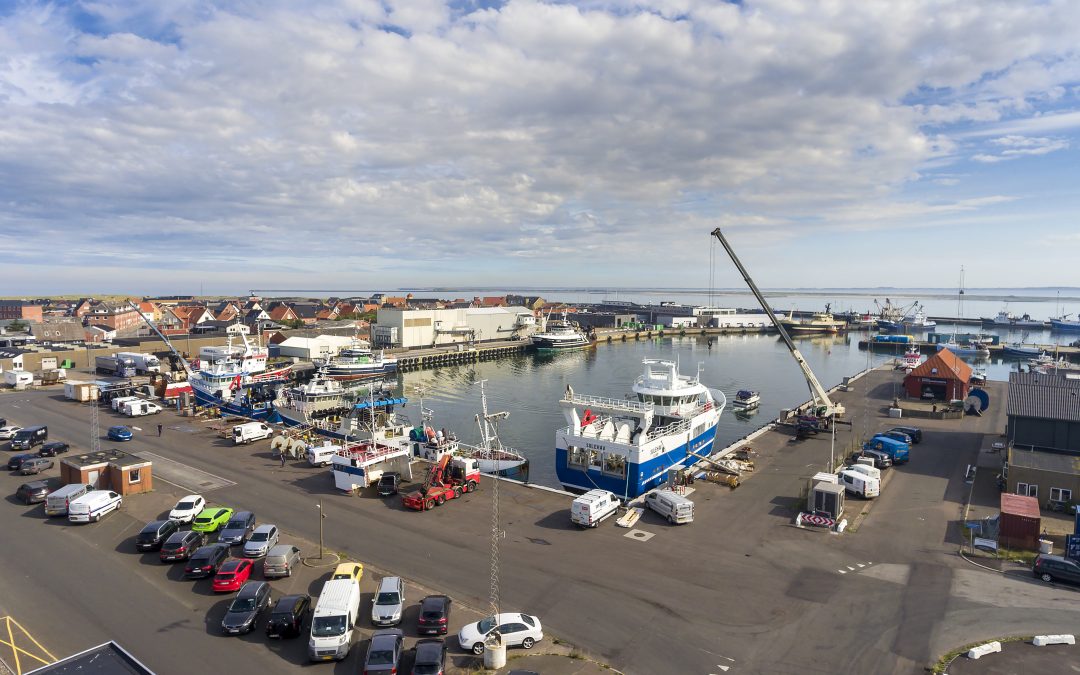 With fishing the pace of development is rapid, fishing vessels continue to grow in size, and new demands are being made of the industry. Therefore, the Port of Thyborøn always engages in close dialogue with those using the harbour basins before new port facilities are planned to ensure that the best possible solutions are found and that the infrastructure takes users’ needs into account.

“The Port of Thyboron has its roots in fishing, and fishing remains very important for the port. Overall, the fishing industry here accounts for about half of revenue, and we’re ranked third among the largest Danish fishing ports. Therefore, it’s also strategically important to ensure that our port facilities continue to support fishing activities and the work of the fishermen, and that we generally keep pace with developments,” explains Jesper Holt Jensen, Managing Director, Port of Thyborøn.

In line with this, the Port has renovated 402 quay metres in the Vestre Inderhavn basin, and in doing so has created brand-new facilities for the construction of new fishing vessels for the two companies behind Thyborøn Shipyard – Kynde & Toft A/S and Thyborøn Skibs & Motor A/S.

The water depth in the basin, which originally dates back to 1935, has been increased from four to six metres, which means that considerably larger fishing vessels than before can now be built here, and companies can now also carry out heeling and stability tests in the same basin in which the vessels are built.

“This is considerably more efficient, and reduces costs when all the work involved with a newbuild can be carried out without having to move the vessel at any stage. As a port we’re very happy to contribute to cost optimisation by building the right infrastructure for the companies based here,” says Jesper Holt Jensen.

In conjunction with the project, 167 metres of new quay with good vehicular access has been built for fishing activities at Isværkkaj, in particular for transit fishermen from the Netherlands and Belgium as well as Danish fishermen landing fish for human consumption.

With a constant stream of newbuilds and non-stop work at Thyborøn for years, there were no stoppages at all during the renovation work on the harbour basin, and the first vessels have already been built in the new harbour basin and subsequently commissioned. Included among them is the recently delivered Aalskere (which featured in the May issue of The Skipper). Built for Orkney skipper Iain Harcus and partners, the vessel was designed by Ove Kristensen and fitted out by Kynde & Toft A/S.

“It has required detailed planning of the building process to avoid stoppages, and we’re delighted that this has succeeded in full. Today, we have a fully upgraded harbour, where even the oldest of our basins meet current needs,” says the Port’s Managing Director.

Everything has been designed with fishermen in mind to provide perfect working conditions at the port. The approach to the quay has been simplified, as the old discharging piers have been removed and replaced by 160 metres of brand-new quay.

The layout of the new quay area allows fishermen to restock their vessels and even have service work carried out at the same time as their catches are being discharged. The new quay provides easy access for maritime service companies, which can perform work during discharging operations.

The construction work, which started in 2018 and was completed in summer 2020, has proceeded as planned without any stoppages, and fishermen have been able to discharge fish at the fishmeal and fish oil factory throughout the entire construction period, with production running without interruption.

The new discharging facilities have resulted in an increased pace of activity. Discharging is considerably faster today, with two parallel draining plants which can remove as much as 400 tonnes an hour. By comparison, the factory used to receive 150 tonnes an hour. The increase will make a big difference in terms of how quickly vessels can return to sea.

Supplies can also be delivered much faster. The local water company is now able to supply fresh water at an impressive 160 cubic metres an hour, while the bunker fuel supplier Nordic Marine Oil has built a new MGO tank system that increases capacity by 1,900 cubic metres and links the existing plants together.

In addition to the 160 quay metres of discharging quay, which has been named Sperlingkaj, a further 130 metres of new quay, called Oliekaj, have been built in connection with the construction project, which can be used for bunker fuel deliveries, but also as a waiting berth for industrial fishing vessels when there are no imminent fuel deliveries on the way. Therefore, there is now plenty of space in the port for large pelagic fishing vessels in Thyborøn.