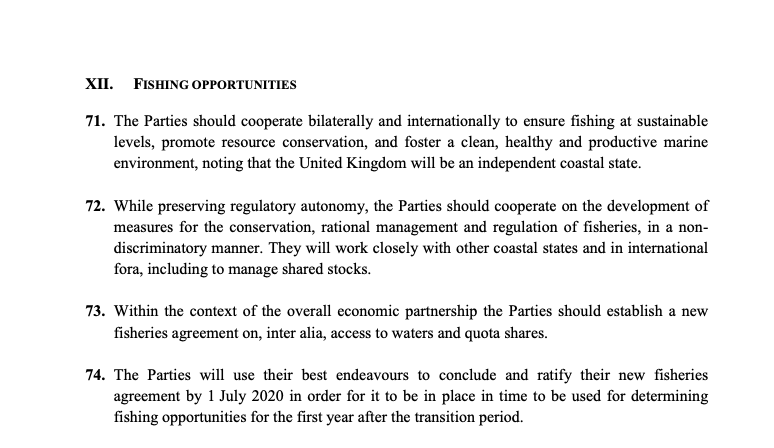 The ‘new’ withdrawal agreement reached between Johnson and the EU has been published. As per the details of the declaration, the EU and UK would aim to reach an agreement on fisheries by June 2020, with the objective then of agreeing quotas for 2021. Any agreement made would be made “in the context of the overall economic partnership”.

Thus far, the Scottish Fishermen’s Federation (SFF) have welcomed the agreement reached and said three years since the referendum, this agreement provides the gateway to the UK’s exit from the Common Fisheries Policy, and the UK becoming an independent coastal state.

Elspeth Macdonald, CEO of the SFF, said: “More than three years after the referendum, we hope that Saturday marks the turning point when we can move to the next stage – working towards the Sea of Opportunity that exists outside of the EU’s Common Fisheries Policy, and being able to re-dress the imbalance where 60% of fish caught in UK waters are not caught by the UK fleet.

“As an independent coastal state, the UK will control access to waters and fishing opportunities, meaning that we will be able determine for ourselves who catches what, where and when in our waters.

“Reaching agreement on the terms of the UK’s withdrawal from the EU represents the end of this phase, but there is much still to do to secure the opportunities that exist for the Scottish fishing industry.

“It is imperative that the implementation period does not extend beyond the end of 2020, and that negotiations on the future free trade agreement between the UK and EU do not make any concessions on access to UK waters. We have made these points at every opportunity to government, and will continue to hold the government to account on the commitments made to the fishing industry in Scotland.”

Johnson, of course, will now have to get agreement on this deal in Parliament.

Full details can be found at https://ec.europa.eu/commission/sites/beta-political/files/revised_political_declaration.pdf