Macduff Shipyards Limited have recently signed over their latest new build fishing vessel, ‘CELESTIAL DAWN, BF 109’, to owner George Hepburn and partners. This fishing vessel replaces the owners previously vessel of the same name, which was also built by the yard in 2000, and is intended to fish out of Peterhead in the North East of Scotland, targeting primarily prawns in the North Sea.

CELESTIAL DAWN is a new design of fishing vessel, designed between the yard and local Naval Architecture & Consultancy firm Macduff Ship Design. The vessel is the first of three sisterships, with the second vessel now under construction, and the third vessel due to commence construction later in the year. This series of fishing vessel will share not only the same hull form but also the same place of origin, with all three vessels being built at the yard’s fabrication hall in Buckie, a significant milestone for both the yard and town. 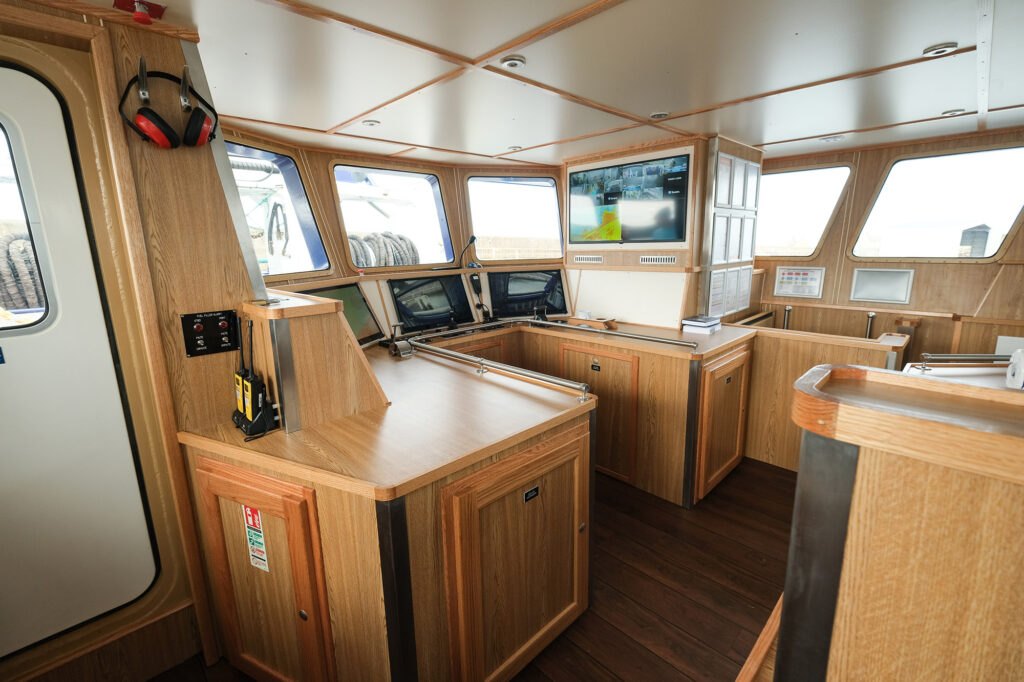 The design of Celestial Dawn began in 2018 and although intended to fish in a similar way to the owner’s previous vessel, the design of the new vessel was focused to both enhance crew comfort and improve fuel efficiency. During the early design phase, the yard commissioned the Wolfson Unit in Southampton to run a case study of two hull forms utilising CFD technology. The first hull form was a design previously built by the yard for a similar type of fishing.

The second was a new concept model for the CELESTIAL DAWN featuring increased length, a gradual bustle forward of the propeller and a unique stem where the bulbous bow was not fully submerged but rather tapered gradually into the bow’s upper region. Results from the study indicated a significant reduction in hull resistance at the two test speeds of 8 and 10 knots which was verified recently during sea trials where the CELESTIAL DAWN recorded an average top speed top speed of 10.5 knots. 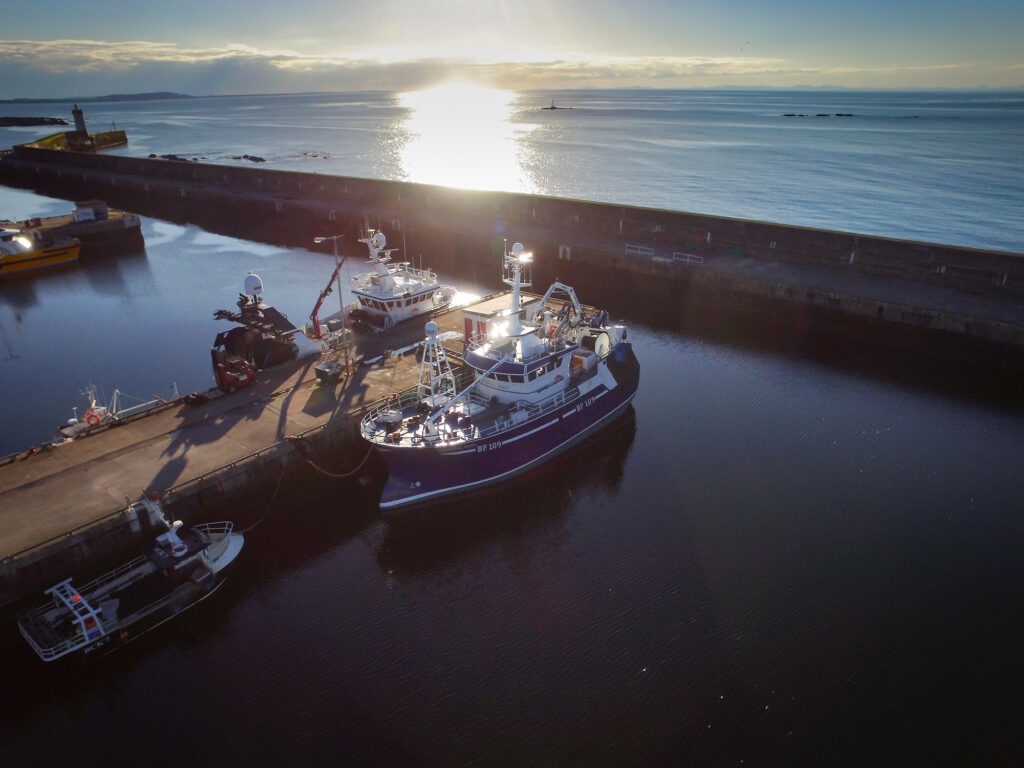 Another significant difference between designs was the increase in beam from around 7.0 m of previous vessels in this category up to around 7.6m. The increase in beam allowed the vessel to carry less internal ballast whilst also creating more deck space which was of particular benefit within the accommodation and fish processing areas. As a result of the increased dimensions the gross tonnage of the vessel was around 10% higher than the previous CELESTIAL DAWN.

With the initial design complete the construction plans were drawn up by Macduff Ship Design and submitted to SFIA for plan approval with the MCA completing plan approval and certification after SFIA terminated this service. The hull of CELESTIAL DAWN is built entirely from steel, apart from the wheelhouse and mast which are aluminium, and features a double chine hull form, transom stern and modern bow designed to cut cleanly through the sea with less energy leading to a reduction in fuel consumption and emissions along with increased crew comfort. 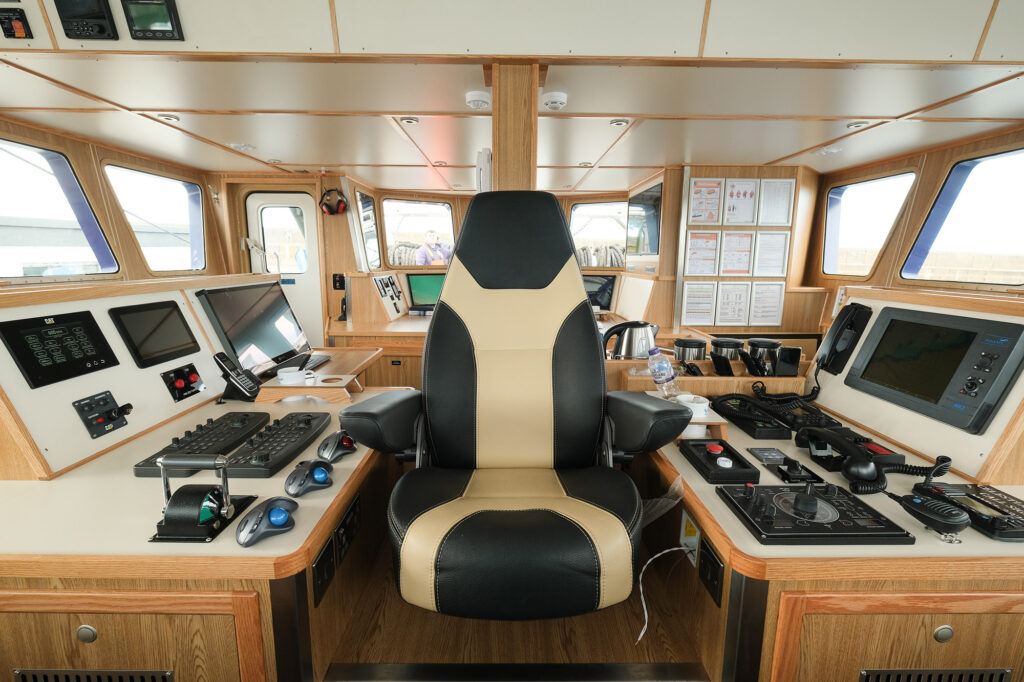 In broad terms the layout of the CELESTIAL DAWN is similar to some of the other recent new builds produced by the yard. Below deck features the cabins, engine room, fish hold and a large freshwater tank forward of the collision bulkhead. Whereas above deck is situated the aft shelter, galley/mess and side passage area, fish processing area and then forepeak where the trawl winch is situated. 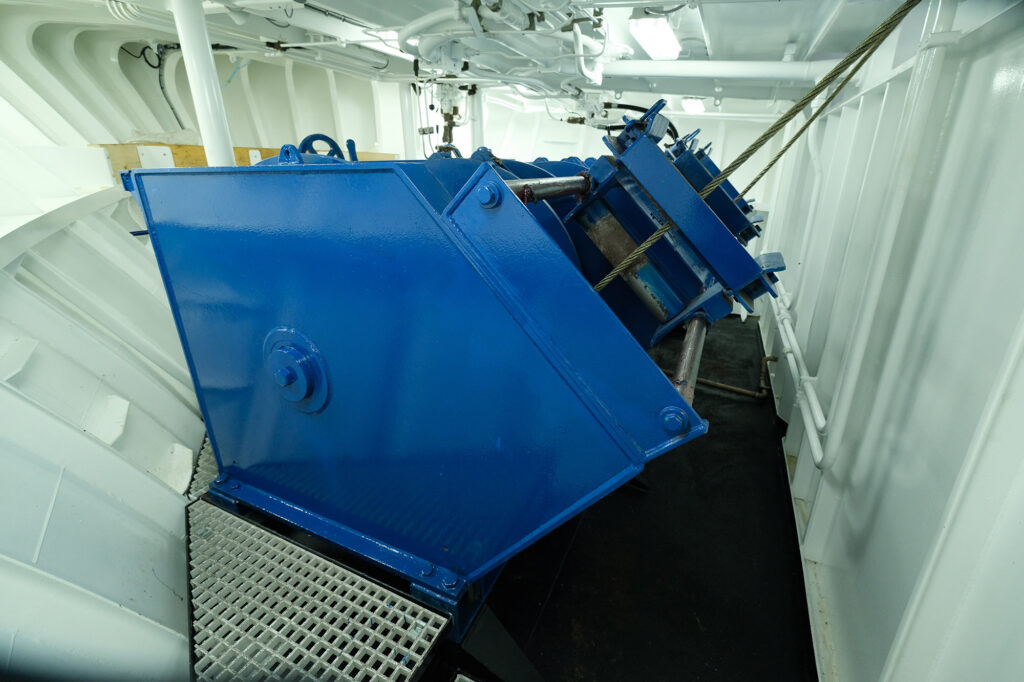 Thistle Marine of Peterhead supplied both the MFB8 landing crane and MBK13 powerblock crane, both of which featuring a slew ring base. Primary hydraulic power is provided by a single Parker hydraulic pump driven from a dedicated Mitsubishi 6D24 auxiliary engine producing 218 kW whilst secondary hydraulic power is provided by a Parker hydraulic pump driven from a power take off fitted to the main propulsion’s gearbox. A hydraulically powered bow thruster with 1.1 tonnes of thrust is also fitted, supplied by Kort Propulsion. The hydraulic system, designed by the yard, is cooled via a Blokland box cooler and Bowman heat exchanger. 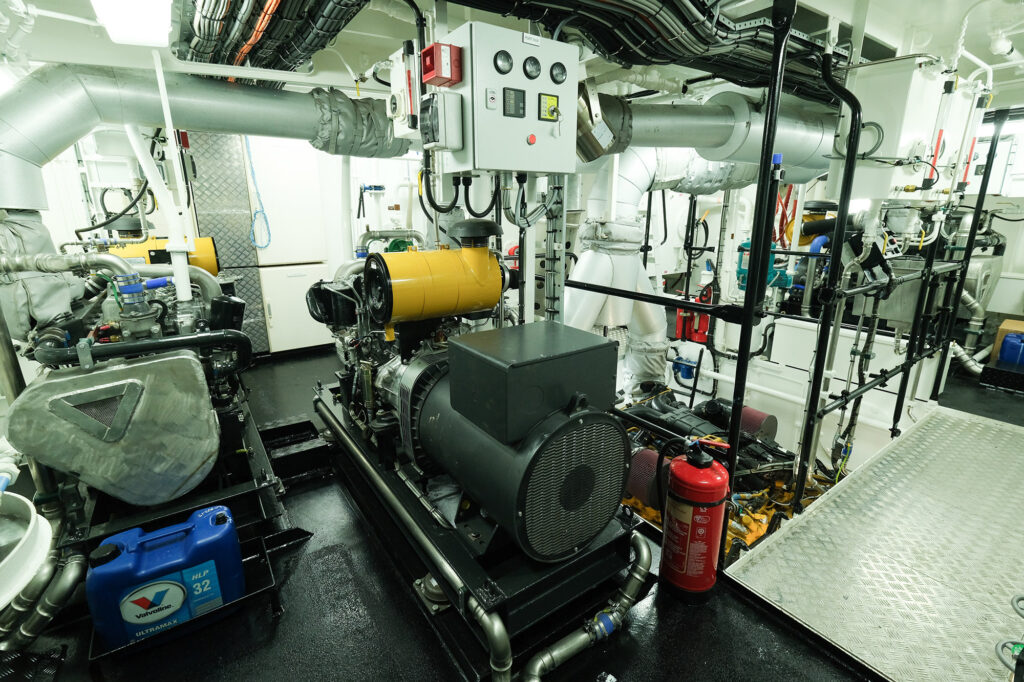 CELESTIAL DAWN is now the ninth vessel built by the yard in recent years to feature this propulsion package which has demonstrated itself to be both robust and adaptable with the Wide Operating Speed Range of the C32 main engine providing flexibility to achieve full power from a fixed pitch propeller both whilst steaming and trawling.

CELESTIAL DAWN also features a triple rudder system and high lift propeller nozzle provided by Wartsila. Cooling systems for all engines and hydraulics onboard are served by box coolers supplied by Blokland Non-Ferro. 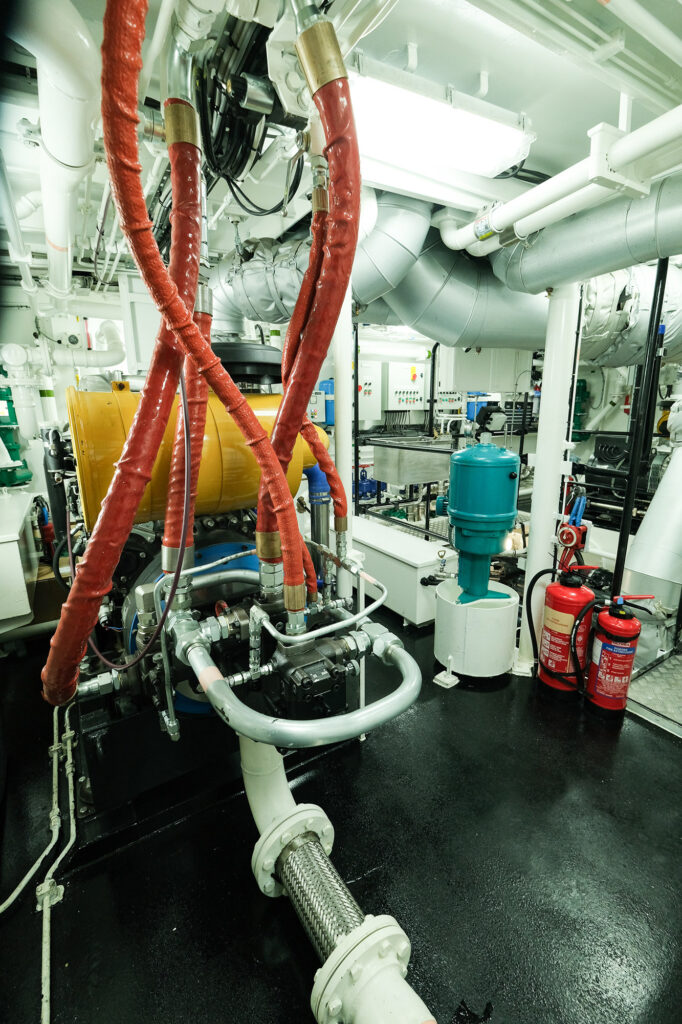 Electrical power onboard is provided by two Mitsubishi generator sets supplied by Macduff Diesels Limited, each with a rating of 98 kWe and of sufficient size to run the vessels power independently providing complete redundancy. 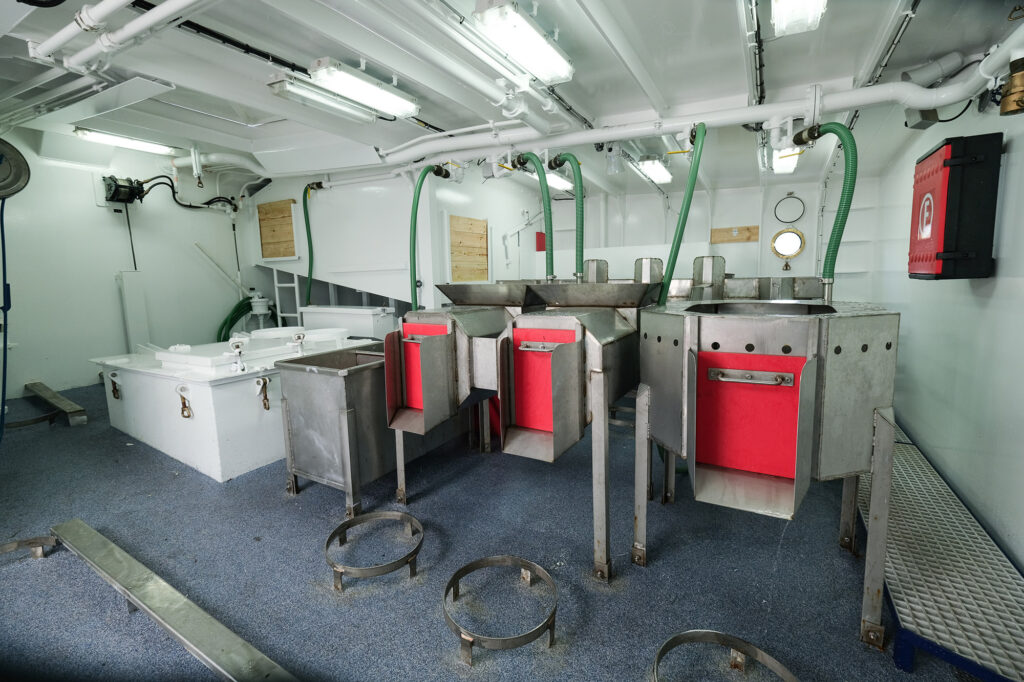 The fish processing deck features a catch handling system built by the yard and Northeast Fabricators and is complemented by a resin floor system fitted by Davidsons Marine & Industrial Painters. A separate compartment is formed within the fish processing area which house both the ice plant room as well as an access hatch and fixed permanent stair to the hold. The fish hold refrigeration system along with ice machine was supplied and fitted by Airo-Tech Solutions.

The vessel was fully painted by Davidson Marine & Industrial Painters with International Paints products applied to a comprehensive marine spec.

The high specification navigation package was supplied and fitted onboard by Woodsons of Aberdeen. A Scanmar net monitoring package along with a JFC transducer was also supplied by Woodsons. 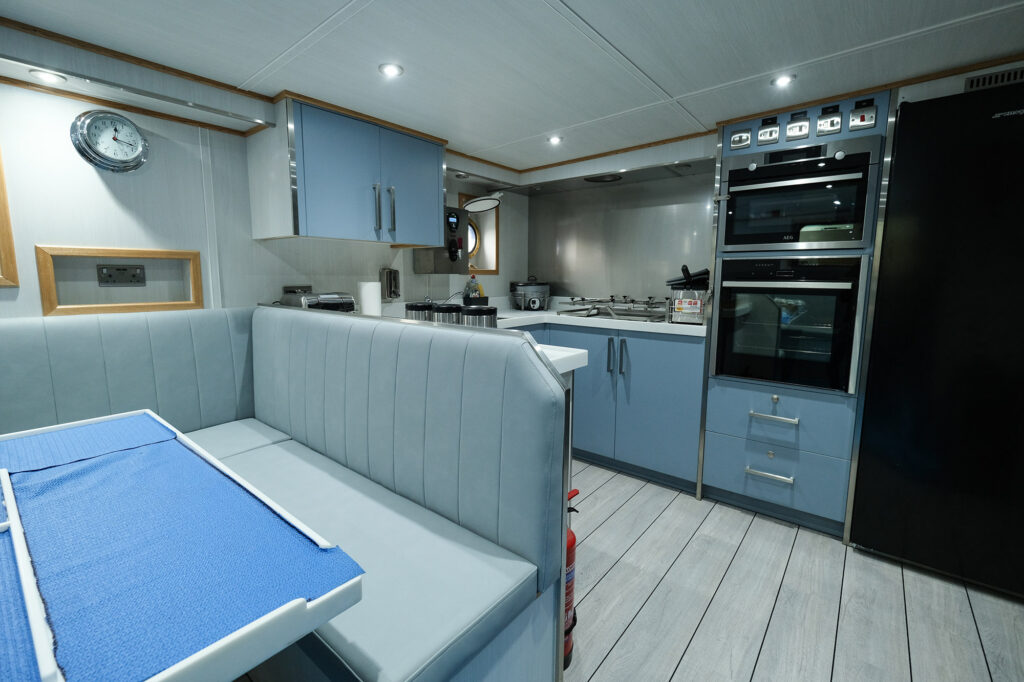 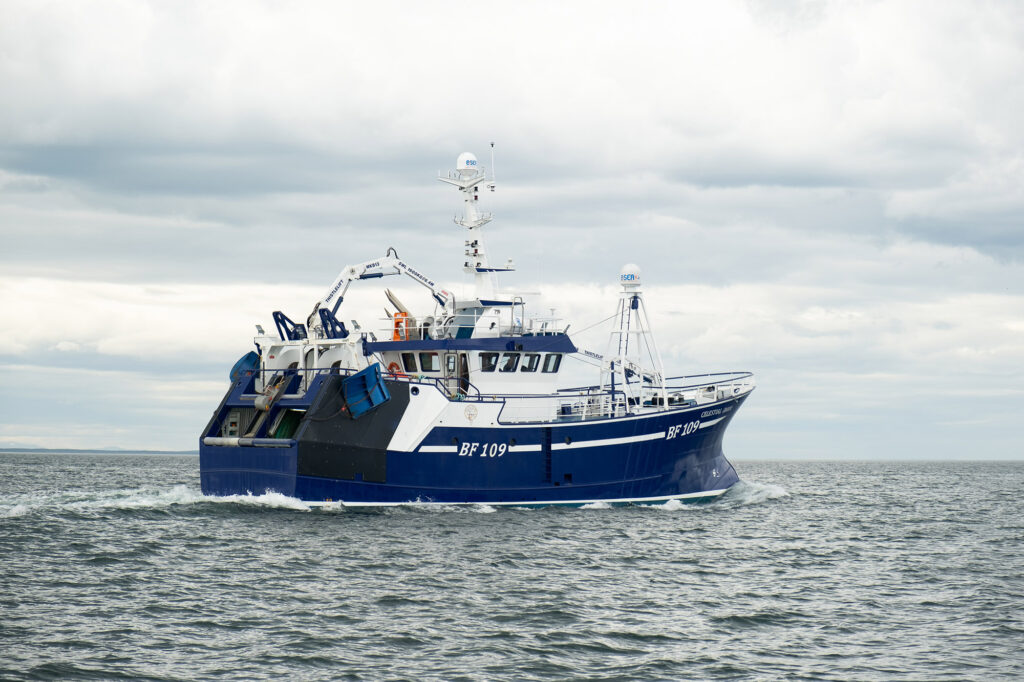 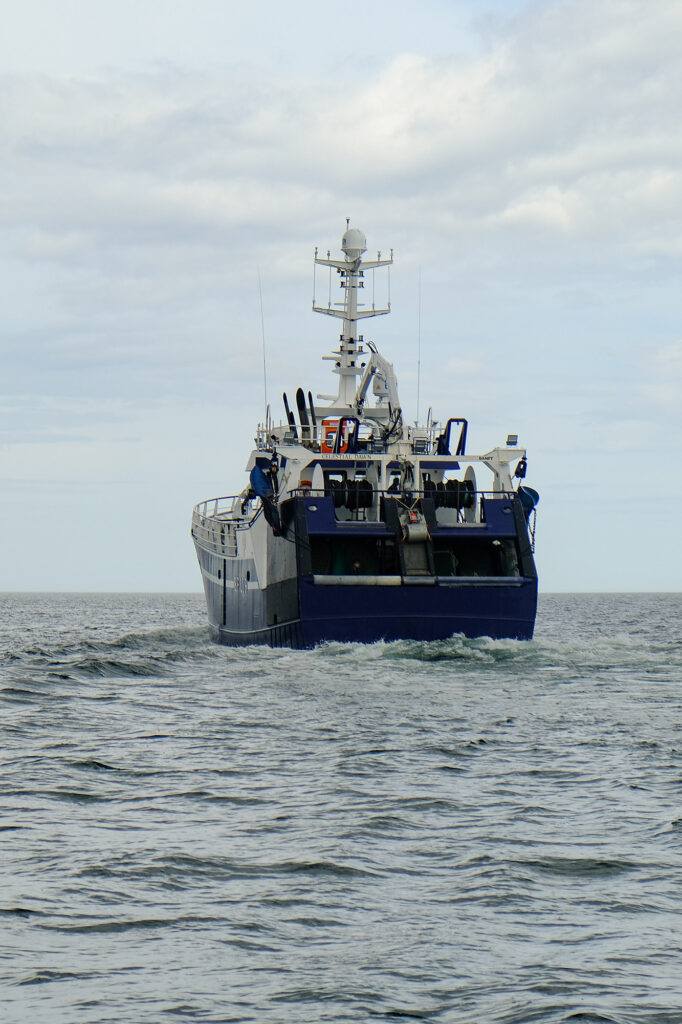 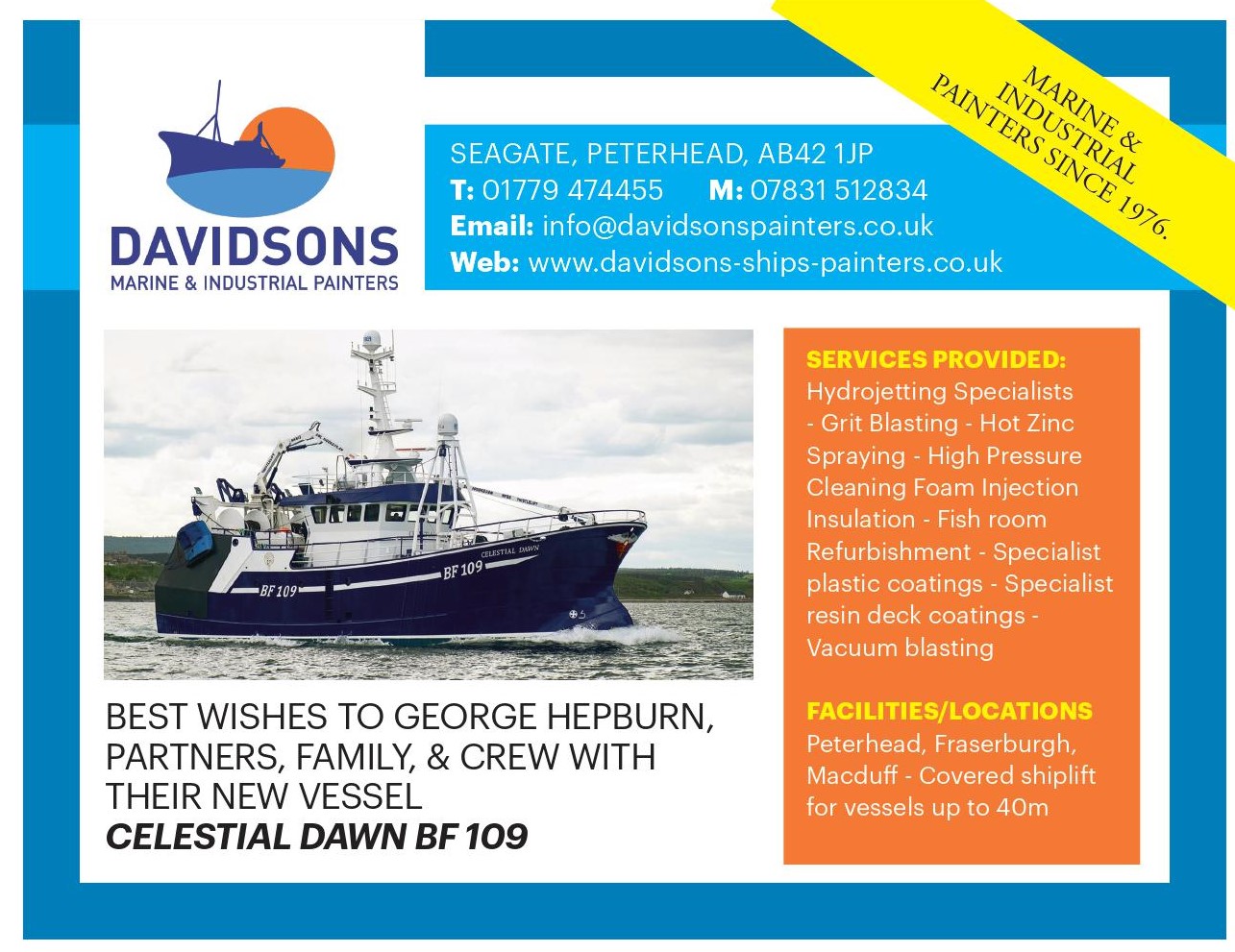