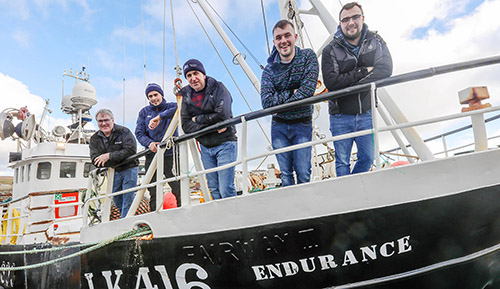 The 75ft vessel has been bought from Skerries partners Leslie and Colin Hughson and Leonard Johnson who had operated her for a long time as Fairway II.

The first tow yielded seven boxes, including four of monkfish, but more importantly, the gear was all working fine, said one of the partners, Ian Irvine, who is also the father of two of the other partners.

Grant and Ben Irvine, skipper Ed Leask, David Irvine and fish selling agents LHD complete the partnership set-up. Grant, 24, is mate on the vessel while his brother Ben, 22, and 24-year-old David are both engineers.

Ian, who has run Ian Irvine engineering for the past 24 years, has no plans to go back to sea other than the occasional summer trip.

Ian said that a big thank you was owed the LHD who had helped massively sorting out licences and quotas plus their investment. “It would not have been possible without the LHD,” he said. 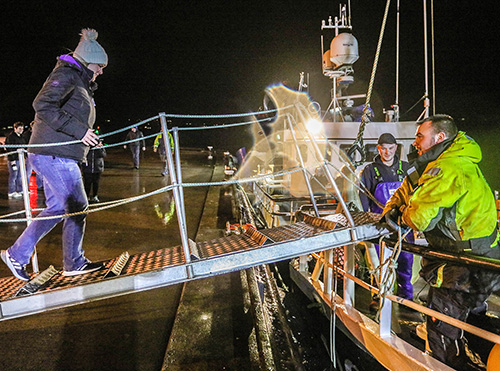 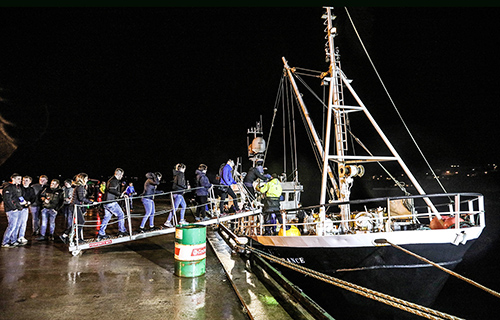 Ed and Grant had been on board the new Guardian Angell previously while Ben was the second skipper on the Opportune. Ian said that the boys were destined for fishing from a young age since he made tin boats for them that they used to tow in the ebb. “It’s all they have been interested in, all they have ever known. My great-grandfather, my grandfather and my father were all fishermen. I was seven years on the Research and a spell on the Contest before I took the daft decision to do engineering work on Whalsay,” said Ian.

The Endurance was originally built for a Peterhead crew by Simek AS in 1989, before the Skerries partners, who are now building a new boat, bought her. She is a good solid boat which had been very well looked after by her previous owners, said Ian. New nets from LHD, ropes and other towing gear are being used as well as 3.25 square metre “high efficiency” Morgere trawl doors that replace the old, heavier, 6 square metre doors. Her engine, a Caterpillar 3508 V8, was thoroughly overhauled during the Christmas lay-up in 2018. Doubts whether the smaller doors would spread the gear have been dispelled and the lighter gear makes towing a bit easier.

The net drums have also proved sufficient to take the larger nets, said Ian. The decision was taken to install new fish finding and plotting gear in the wheelhouse as the boys were familiar with this equipment from their previous vessels and it would have to be installed sooner or later anyway. Licences and quotas for the Endurance had to be assembled from scratch and while the boat has enough quota to get into the local fish producers’ organisation, the SFPO, she is still renting a lot of fish, which is a bit of a gamble, said Ian.

Fish can be rented at so much per box, but the profitability of that deal depends on the expense of catching plus the amount the fish sells for, leaving much uncertainty.

According to Ian, the system allows quota to shift into the hands of investors, something that does not benefit active fishermen.

It is just one of the many financial difficulties facing young potential partnerships wanting to get into a highly profitable sector that is owned and crewed by an ageing workforce. But the fact that the young partners who own the Courageous are investing in a new trawler after only four years is a sign of a buoyant and confident future.

They are continuing to fish with the old vessel, formerly called Guardian Angell, while the new one is built at Karstensen’s in Denmark and is expected to be complete next year.

Meanwhile, the Skerries partners are having a new 28m long replacement for the Fairway II fitted out at Mooney’s Boats in Killybegs. The hull of this vessel was built in Poland.

The Endurance deal was signed on Tuesday, February 25, the birthday of Ian’s mother Jean Mary Irvine, and Endurance was back in Whalsay for a public inspection by Friday 28.Ian said that there were over 35 intact bottles of whisky brought as hansels on Endurance when he did the Saturday redd-up.

“Hopefully we will not be needing all that luck, but the more good luck you have the better,” he said.

The Skipper team would like to wish the Skipper, family and crew every success and safe fishing with the new Endurance.

All images courtesy of Ivan Reid