NASF commits to almost doubling proportion of female speakers by 2025 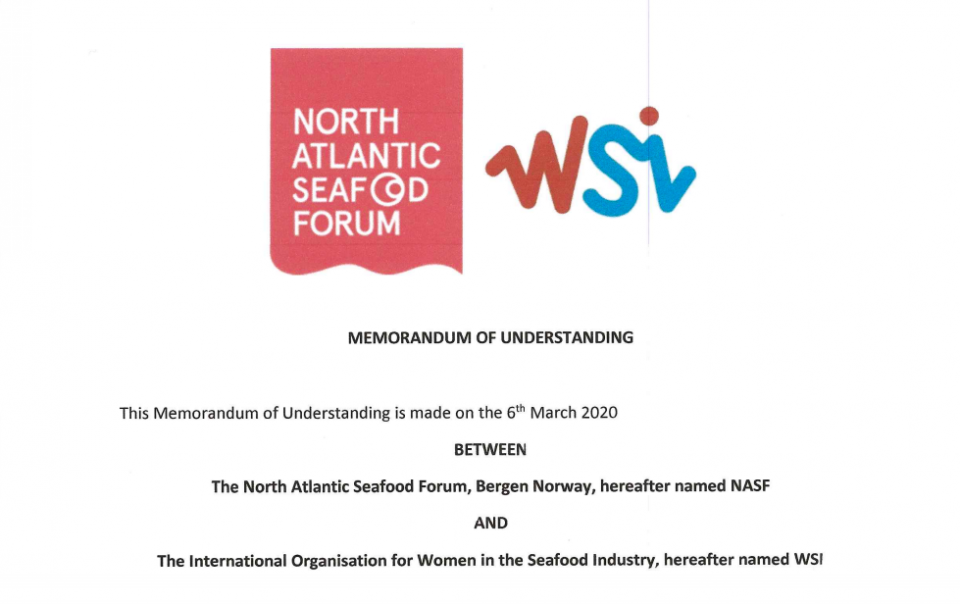 The International Association for Women in the Seafood Industry (WSI) and the North Atlantic Seafood Forum (NASF) have signed a Memorandum of Understanding (MoU) with the objective of increasing the representation of women invited as speakers at the NASF conference to 40 per cent by 2025.

WSI are a global non-profit organisation raising awareness about gender inequalities and their impacts across the still male-dominated global seafood sector. As part of their work, WSI has been working to ensure a better gender balance at seafood conferences.

Every year NASF, the world’s largest annual seafood business conference, attracts close to 900 professionals representing more than 350 companies from around 30 countries. Some 100 speakers are invited each year.

According to the MoU, which was signed in Bergen, Norway on March 6th—and in line with figures from the 2019 WSI Watch which indicate the distribution of speakers by gender at large seafood conferences is skewed 80 per cent in favour of men—NASF is characterised by a very moderate proportion of female speakers, 19% in 2017 and 21% in 2020.

In terms of the importance of addressing this imbalance, the MoU states: “NASF understands that chances of public exposure should be given to a large spectrum of highly talented female speakers without weakening the excellence of the event.

“NASF and WSI agrees that the seafood industry is facing new challenges and require new talents. Both parties gather to create effective and sustainable change and promote a progressive and inclusive culture in fisheries, aquaculture and the seafood processing industry.”

As such, and in consideration the United Nations’ Sustainable Development Goals (SDGs), more specifically SDG 5 (Gender Equality), both parties have agreed to work together to increase the representation of women invited as speakers at the conference.

As part of that cooperation, NASF will target the goal of 40 per cent female speakers by 2025 – not only as an overall target for the conference, but also at seminar level. NASF will also raise awareness among seafood leaders on gender equality, when planning and executing the NASF program.

With respect implementation of the agreement, the MoU states that: “Every year until 2025, the signatories of the MoU will track progress and will consider what should be done to make sure the objective will be met.”