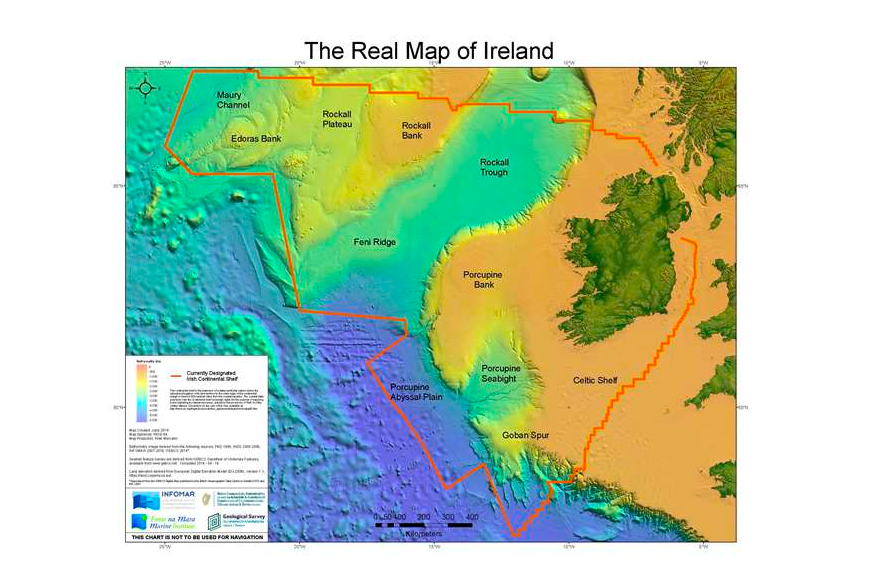 As part of the Marine Institute’s 10 week Oceans of Learning series, journalist Lorna Siggins has penned an opinion piece for the final week’s topic on ‘One Shared Ocean, One Shared Future’.

Lorna is the former western and marine correspondent at the Irish Times, and also author of Everest Calling (1994/2013) on the first Irish Everest expedition; Mayday! Mayday! (2004) on Irish helicopter search and rescue; and Once Upon a Time in the West: the Corrib gas controversy (2010).

When Dr Kathy Sullivan (68) climbed out of a tiny submersible which had returned from the bottom of the Mariana Trench, none of the subsequent headlines were quite as clever as that “most vertical girl in the world” slogan coined by several of her friends.

It inspired a badge which she now wears – the first female US astronaut to walk in space and to reach the deepest known point of the world’s oceans has a sharp sense of humour. Some might say with her Irish lineage that she’d have to have – she has cousins on West Cork’s beautiful Beara peninsula.

Former Marine Institute chief executive Dr Peter Heffernan wisely developed that link through initiatives like the Atlantic Ocean Research Alliance when Dr Sullivan was US Under Secretary of Commerce for Oceans and Atmosphere and National Oceanic and Atmospheric Association Administrator (NOAA).

Dr Sullivan—an oceanographer and geologist—joins that panoply of individuals with Irish connections who have distinguished themselves over many centuries in the marine sphere, be it in fishing or trade, or in foreign navies, in exploration, or in technology and innovation.

The lives of many of these mostly male marine pioneers—from St Brendan to submarine designer John Philip Holland and explorers Sir Ernest Shackleton and Edward Bransfield—have been documented by late maritime historian Dr John de Courcy Ireland among others.

He was often asked by colleagues at international conferences to explain why so many Irish mariners of note had to go abroad to make their name.

These academics were curious to know why there was not much more lasting “Viking influence” in Irish socio-economic activity, given that Ireland’s coastal state population was not dissimilar in size to that of Norway.

The “real map of Ireland” is at least ten times the land size, as that clever Marine Institute postcard image depicts, and our Continental Shelf position on a northerly latitude is tempered by the influence of the Gulf Stream

The impact of colonisation, including deliberate efforts to suppress the Irish fishing fleet when it became too competitive, were among reasons given by Dr de Courcy Ireland during a debate on this question at a conference on “Ireland the Sea”.

It was hosted by the Merriman Summer School and Bord Iascaigh Mhara in Co Clare back in 1983.

I came across the paperback record of that debate, and it was a welcome distraction during a brief “Covid-19 lockdown” office tidy.

Conference participant and founding Irish Skipper editor Arthur Reynolds pointed to the uneconomic reality of 900 different landing points around the coast. The fertility of this island’s soil always made agriculture a more attractive bet, he said.

During his time as industry and commerce minister almost a decade earlier, he had attempted to set up a “Statoil” model for hydrocarbon development here. He noted that the sea provided this State with “almost an embarrassment of riches, and a superb national challenge”.

“The fact that this potential had not been realised was not due to “genetics” or “laziness”, but due in part to economics and the “horrendously expensive” costs of certain maritime development, Keating said.

However, there was also a confidence factor, he argued; we were only beginning to recover from a “profound culture shock” which was “not unique to us”.

The colonial experience had touched “everywhere in the world where people were defeated by newer and superior technology, from South-East Asia to the homelands of the North American Indians,” Keating said.

He outlined one First Nation response to this shock – the “ghost dance”, and suggested the Irish version of this was our “fascination with words and music…. based on their use in a magic sense, for altering consciousness and for making reality go away….”.

Magic being illusionary, the only possible “national therapy” was development of our marine potential, in his view. Without mobilisation of capital – which had fled these shores over previous centuries – we would not “mobilise technology”, he said.

That same year, a marine management system which has had devastating results for coastal states like this one was rubberstamped. Just two EU states—Ireland and Denmark—had a surplus of fish at the time of Common Fisheries Policy (CFP) formulation.

The CFP is subject to ten-yearly reviews, which now place much greater emphasis on sustainability. Brexit creates a really serious challenge, as industry organisations have outlined, yet there seems to be a reluctance here to seek a more equitable revision of the policy, based on proximity to a resource.

As the late Castletownbere fishermen and industry leader Donal O’Driscoll pointed out, the initial deal struck in favour of agricultural benefits and structural funds was never intended by our EU masters to be “cast in stone”.

EU directives on the environment have had a more positive influence, though sometimes failing to protect communities from the pressures of the market.

A template for democratic planning published by the British Institution of Civil Engineers four years ago cited this State’s handling of the Corrib gas project as an example of “how not to undertake a development”.

Scottish islanders have also taught us that sustainability is not about ticking consultation boxes, but about genuine stakeholder engagement and community return.

Like the tide coming in and out twice a day, the sea still throws up endless opportunities for change – seaweed culture as one example, which the late British scientist Dr Eric Edwards once forecast would be far more lucrative for Ireland than salmon farming.

Fascinating work by the Bantry Marine Research Station in west Cork is exploring how a type of red seaweed could also reduce methane emissions in cattle – a valuable case, if realised, of “blue meets green”.

That active Atlantic system which could turn Ireland into a “Green gulf” of renewable energy, in the words of one developer, could fuel home energy needs and bulk hydrogen exports.

The reports by NUI Galway’s Socio-Economic Marine Research Unit which inform the government’s Harnessing Our Ocean Wealth strategy show a positive trend. It recently reported on the opportunities which coastal tourism could offer during this pandemic.

Complementing the research in third-level institutions and the efforts of the Marine Institute and BIM, there are also a plethora of individuals and non-governmental organisations who have helped to raise awareness of our maritime heritage and of our potential on the Atlantic margin.

Like Dr Sullivan, there are many women involved in the forefront of marine research, development, innovation, along with master mariners, harbourmasters, sailors like Olympic medallist Annalise Murphy and offshore yachtswoman Joan Mulloy.

Yvonne Shields O’Connor, formerly of the Marine Institute, is chief executive of the Commissioners of Irish Lights, and Ireland’s first female master marine Capt Sinead Reen is in a senior role at the National Maritime College of Ireland.

And Irish people no longer have to leave to have an impact in that big blue field.

Marine Institute chief executive Dr Paul Connolly has been at the helm of the prestigious International Council for the Exploration of the Seas (ICES), and his predecessor, Dr Heffernan, is one of 15 experts on the European Commission’s Mission Board for Healthy Oceans, Seas, Coastal and Inland Waters.

And the unthinkable happened in 2015 when a former Naval Service flag officer, now Vice-Admiral Mark Mellett, became head of the Defence Forces.

A global pandemic can focus attention on the potential of the ocean environment and the rich waters around this island – as a vital source of protein, new medical treatments and a source of renewable energy.

However, a pandemic might also distract attention from its fragility, and the fact that man-made rubbish has reached the remote Mariana Trench and microplastics are poisoning the deepest ocean creatures.

“We have taken for granted the fact that we have been fortunate to live in the Goldilocks zone – that sweet spot in relation to the Sun,” Dr Sullivan told me in a recent interview.

Ireland is in the sweetest “Goldilocks zone” when it comes to marine resources.  We must be ready to manage that good fortune sensitively, and for both communities and individuals, when the gold rush comes.