IFPEA meeting calls for urgent action by Government as fisheries sector fails to get priority in TCA/Brexit fallout. 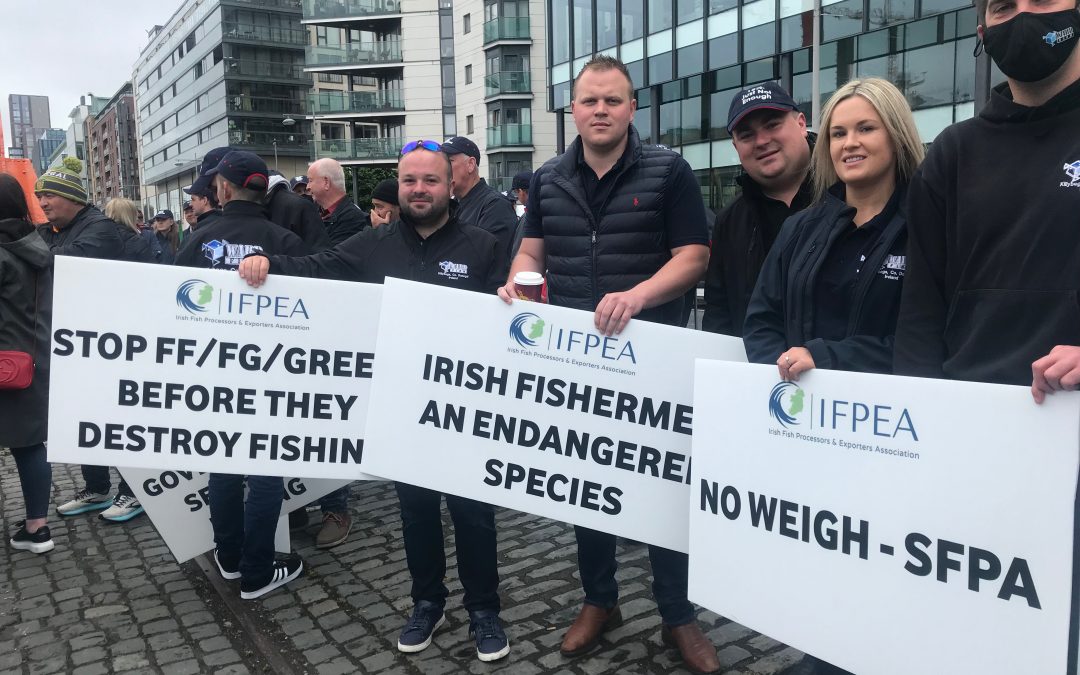 Minister Charlie McConalogue  censured for refusing to attend the meeting

The Irish Fish Processors & Exporters Association (IFPEA) became the first of the national fisheries representative bodies to hold an in person gathering after the Seafood Task Force released their final report, when they gathered in Dublin on Friday 22nd last. The meeting was attended by over 60 representatives of various fish processing and exporting companies across the country. This was by far the largest members meeting of any fishing organisation in the past 18 months, and was a welcome sight of the strength, unity and resolve of the industry to fight back and challenge the current lack of interest by the Government of the day and the failure on the part of the EU to treat Ireland in a more fair and equal manner as a member state. This request from the industry is only in line with the commitments given by Michel Barnier and the EU Commission throughout the Brexit talks process when they stated that “no members state would be disproportionately hit”.

Guest speaker at the event was Chief Executive of BIM Jim O’ Toole, who delivered a comprehensive in-depth analysis of the current state of the processing sector, focusing on delivering the change required to meet the challenges of TCA/Brexit. A very constructive discussion took place on the outcomes of the Taskforce, and the need to have a focused Brexit Adjustment Reserve fund that is active and willing to invest in the entire processing sector – be that by way of capital investment or the processing liquidity scheme. The Taskforce recommendations contain over €102 million of initiatives for the processing sector, this is to be welcomed. The IFPEA expressed their support for the ongoing commitments and efforts of BIM and of Jim O’Toole in particular.

The meeting agreed that the emphasis of any future funding plan must be on the adjusting to the realities of post Brexit/TCA, providing the stimulus necessary for processing to diversify, pursue value add and plan at least in the interim to do much more with less supply of fish. Whilst the meeting was resolute in asserting that burden sharing still needs to be the priority policy. It was clear that to date no successful dividend has occurred from any proposal undertaken through Burden sharing, and an issue of major concern for all gathered at the meeting was the complete lack of any coherent strategy for burden sharing at either Government level or within the Department of Marine.

Whereas, Brexit/TCA is a once in a lifetime hit to the Irish economy, it is in reality a reoccurring hit to the Irish Fishing Industry, each year, year on year with accumulative losses of €215.653 million in the period until 2026 alone. That is less quota, less fish to process, reduction in opportunity to the industry for sustaining current markets and developing future potential growth. Many in the IFPEA believe that the full scale of the impacts of the TCA are not fully realised on our politicians because if it was fully known to them, then surely more would be done by our political leaders to reverse or address the situation. In many ways, upon examining the situation objectively – Irelands response to TCA fall out has been weak, lacking focus and clarity of leadership so far.

This is a massive hit to what was an already struggling sector. The IFPEA expressed frustration and anger at the Minister and Government at the lack of any clear strategy to obtain any degree of burden sharing, we are now almost 11 month post TCA, and yet we have failed to see any actual mechanics of how the Government intend to obtain a burden share deal for Ireland, it is worsened by the fact that Commissioner Sinkevicius stated on his recent visit to the country, that no renegotiation of the CFP will take place until post 2026, if at all.

The IFPEA unanimously passed a motion of censure against Minister Charlie Mc Conalogue for the refusing to attend the meeting, having initially accepted the invitation on the 7th of October, only to subsequently withdraw it due to comments made by the IFPEA CEO Mr Brendan Byrne surrounding the failures of successive Governments, Department and the Minister regarding fisheries policy since joining the EEC/EU. These comments appeared in the UK Times -Irish version on the 14th of October in an article written by journalist Mr Patrick O ’Donoghue.

The IFPEA stands united behind its CEO and the positions taken by him on behalf of the Association – and expresses its shock at the position taken by the Minister. The association is extremely frustrated at the lack of any progress on matters relating to fisheries over the past year, but especially since the TCA deal last December.

What is required in the industry now, is strong leadership both at political level nationally and at European and a fundamental reassessment of all aspects of the industry is urgently required, in an attempt to understand, why there has been a litany of failures since our joining the EEC/EU. In reality the Irish fishing industry should be multiple times the size it presently is, unfortunately it is an industry that is contracting as opposed to expanding at present and that is the crises we face. When we examine other coastal states over the same period, many of the them with only a fraction of the fishing opportunities that surround our island – it is easy to understand, why the Irish Fishing industry is so aggrieved by successive Government failures and EU policy in general.

The outcomes of the Seafood Taskforce may not suit or be welcomed by all sectors of the fishing industry equally, it nevertheless charts a pathway forward for the industry over the next 10 to 15-year cycle. But, the recommendations of the Taskforce are worthless unless there is the genuine commitment and drive at political level to bring them to implementation stage, and this needs to happen sooner rather than later.

The fishing industry can no longer continue on the current trajectory of loss and failure, for too long more of the same has been allowed to continue – now, is the time for this nation to put fishing front and centre. What is required is full engagement with the industry, robust debate that will be both frank and on occasions tough to take but this will lead to solutions that all sides can have confidence in, with a clear marked road map to restore confidence in one of Irelands premier natural resources which is the fishing industry.

Absenting oneself, from meeting the industry on the basis of comments made by industry representatives will not convince anyone of the level of commitment on the part of our Minister nor does it demonstrate the degree of leadership necessary at this critical time, in fact it only adds to the current level of lack of confidence in our political leaders in terms of what they really think of the fishing industry.

The IFPEA will continue to represent the processing sector in a strong and clear manner, that may well be on occasions be difficult for politicians to take, but we as an association will continue to articulate the challenges we face as processors on a daily basis. Real challenges such as the removal of a control plan and the loss of the derogation to weigh after transport of fish, an issue that has crippled the Irish fishing industry across all sectors since last April. The immediate need for industry to have clear sight on the methodology and the proposals of how we as a member state hope to achieve burden sharing for the entire fishing industry. The timeframe for translating the Brexit Adjustment Reserve funding into purposeful and meaningful schemes that does not exclude or unnecessarily dilute their effectiveness for the processing sectors – in dealing directly with the very purpose to which the Brexit Adjustment Reserve was established that clearly was “to adjust to the new realities post TCA/Brexit and to future proof the industry in the years ahead”.