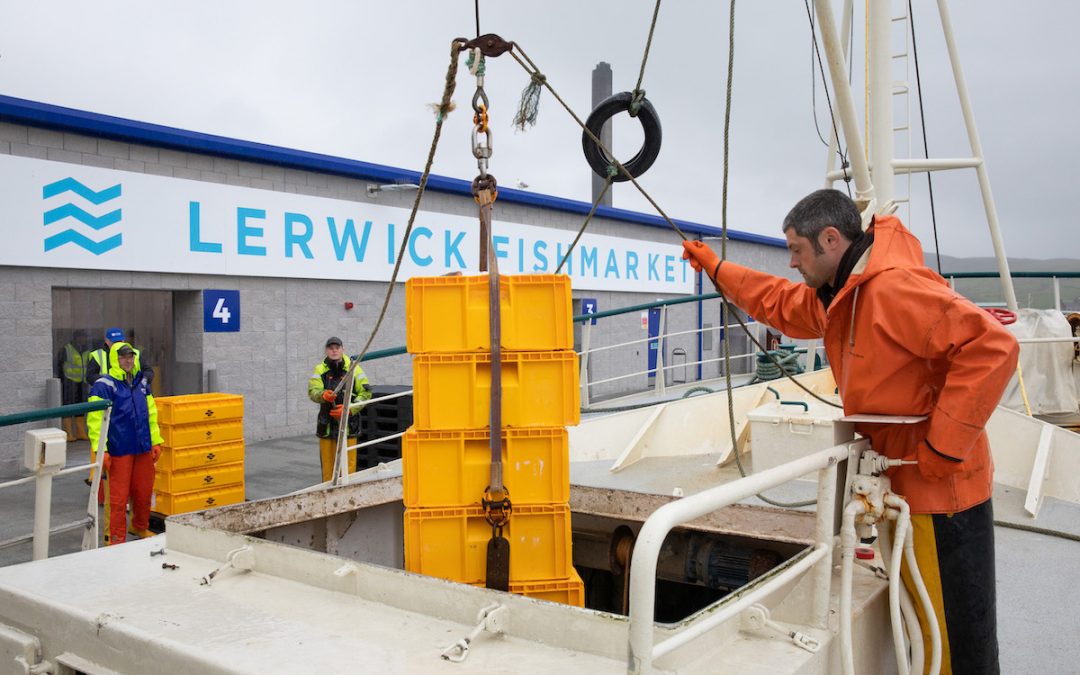 AS THE first fish was landed at Lerwick’s new fish market this morning (Wednesday, August 5), an industry leader hailed the new market at Mair’s Quay as a “tangible sign” of where the sector is heading after Brexit.

Local trawler Sedulous (LK308) was the first to land whitefish at the new market. One hundred and sixteen boxes were sold electronically through the established auction system still based at the old market.

The long-awaited ‘soft opening’ of the £7.6 million Lerwick Port Authority-owned market comes just days ahead of the planned opening of the new Scalloway fish market which has been built for Shetland Islands Council.

Both were almost ready to be used when the coronavirus pandemic struck in March.

The new market in Lerwick, supported by £1.73 million of grant funding from the European Maritime and Fisheries Fund, and a further £500,000 from Highlands and Islands Enterprise, completes the port’s multi-million-pound investment in a new fisheries hub in the Holmsgarth area.

Port authority chairman Ronnie Gair said: “It is the final phase in a series of major projects, the catalyst for which was an extensive dredging programme more than a decade ago and which have transformed the harbour and operations.

“The market is the latest demonstration of our commitment to the sustainability of the sector.”

Port Authority chief executive Captain Calum Grains added: “The interlocking dredging, building Mair’s Quay, Mair’s Pier and market, along with associated improvements, have created a modern hub for the industry in the harbour’s Holmsgarth area at a cost of more than £30 million, increasing co-ordination and co-operation of its activities and reinforcing our position as a leading UK port for the sector.”

Work on installing a brand new and state of the art electronic fish auction system is expected to start later this month, while fishing agent LHD and the Shetland Fish Producers’ Association will move their offices from Lerwick town centre into the building.

Executive Officer of the Shetland Fishermen’s Association Simon Collins said the new market was “a tangible sign of where we are going”. He said the timing of opening both new facilities was perfect for the fishing industry.

“Together with Scalloway market it shows the magnitude of the local fishing industry’s ambition as we are heading into this new brave era,” he said.

“And even without Brexit the existing system was well under strain, and they were looking to grow in any case.

“The two new markets come at exactly the right, as of next year, we are looking at seriously building our capacity as we start to catch more of our own fish.”

The chilling system is more environmentally-friendly and energy-efficient. There is increased space for palletising fish and a 400 square metre chilled dispatch area.

The location on Mair’s Quay means improved access both by sea, including better-suiting landings at all states of tide, quayside water depth and approaches having been deepened to 6.2 metres, and by land for uplifting fish.

The site is adjacent to the L-shaped Mair’s Pier which provides more working area and shelters landing berths.

The new market becomes operational a little over two years after main contractor Tulloch Developments started work on the site in June 2018. The new market was designed and had its construction managed by Arch Henderson.

To mark the first landings, the Port Authority made donations to the local Fishermen’s Mission and RNLI. An official opening of the market will be held at a later date.