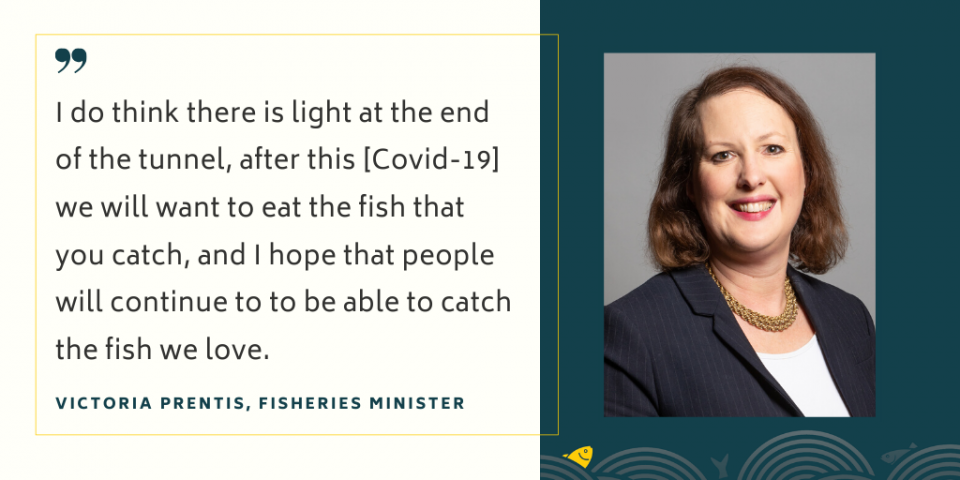 Fisheries Minister Victoria Prentis knows the industry is having “a really, really difficult year”. Speaking in a one-of-a-kind interview with the Fathom team, in which the Defra Minister – only in post since February 14th of this year – breaks down a new £9 million support package for fishermen, she added:“I very, very, much hope we will be coming through that in the next few months, but what I would like to reassure you and other fishermen is that we will carry on listening to the industry and we will try to help where we can.”

As for many industries, the COVID-19 outbreak has brought unprecedented challenges for commercial fishermen, vessel owners, and fish processing businesses across the UK.

Calls for a bespoke financial support package for the industry have been growing in recent weeks, as it has become increasingly clear that fishing communities would fall through the gaps of the national grant and loan schemes announced by the Chancellor.

Speaking in detail about the support package for the first time, and choosing to do so directly to the fishing industry through the Fathom podcast, Minister Prentis discussed how to access the funding with the Cornish Fish Producers’ Organisation’s CEO, Paul Trebilcock. And although there was certainly an uncertain wait for the announcement, it seems now that the package is agreed, the funding is flowing.

Minister Prentis outlined: “If you are eligible, or you might be eligible, you will receive an email, and you fill in a form and email it back. I understand that some fishermen have been paid already. Which is fantastic news!”

Challenged on the fact that the funding available to the industry (which is designed to support fixed costs on a vessel basis, and is graded by vessel size) is not accessible to vessel owners for boats over 24m length overall (LOA), Minister Prentis explained:

“It was becoming very clear to us [Defra] that people with smaller vessels (under 24m) were having real trouble meeting their fixed costs which all fishing vessels have to pay. What we wanted to do was to ensure we could help the parts of the industry that were suffering with the most immediate need.”

Pressed further by Fathom host Paul, who noted fishing businesses with vessels over 24m are also having a difficult time, the Minister added: “It’s obvious the whole industry is having a horrible and difficult and challenging time at the moment and I would never want to downplay that” – going on to explain that Defra evidence indicated some vessels over 24m could meet fixed costs at this time, and that there were more vulnerable sections of the fleet needing the support.

Picking up on the Minister’s praise of local fish delivery schemes in an open letter circulated last Friday (17th April), Trebilcock highlighted the #FishToYourDoor scheme in Cornwall – launched by Seafood Cornwall within hours of the Government’s lockdown announcement. Both agreed that the UK public could fall back in love with domestic seafood as a result of this new-found shortening of supply chains in response to the crisis, with Trebilcock suggesting “Perhaps we will have a new relationship with fish and shellfish in this country”

Minister Prentis responded: “I really, really hope that is a positive that comes from this crisis.”

In a further rapid-response episode to follow this week, the Fathom team have lined up MMO Chief Executive Tom McCormack for a repeat appearance on the UK’s only commercial fishing focused podcast. McCormack will dive into greater detail on application processes for the £9 million package, and support for local seafood delivery services.

Or SUBSCRIBE by searching ‘Fathom fishing’ in your podcast provider app.