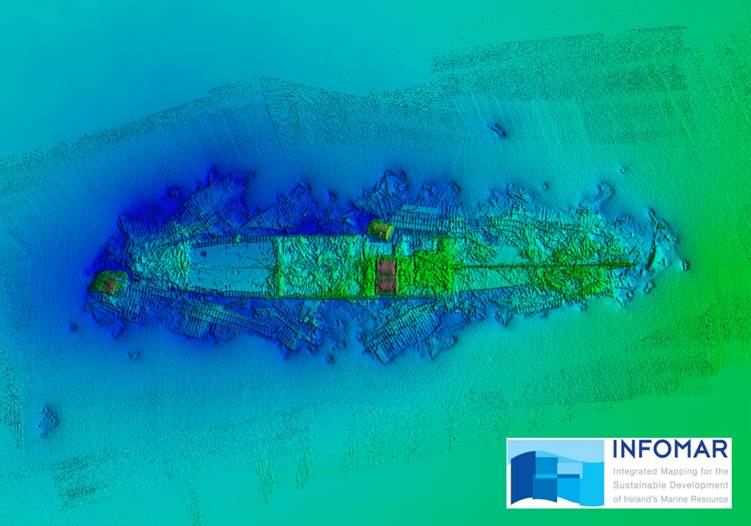 Seafloor, Shipwrecks and Science at the annual INFOMAR seminar in Dingle, 16 and 17 October.

The annual INFOMAR Seminar is a celebration of the year’s work by Ireland’s national seabed mapping programme. INFOMAR is funded by the Department of Communications, Climate Action and Environment and is jointly managed and operated by Geological Survey Ireland and the Marine Institute.

Attendees at the seminar, which will be held in Dingle, Co Kerry, on 16 and 17 October, will be among the first to see details of more than 8,500  of seafloor mapped, over 20 shipwrecks surveyed, and new 3D visuals of the coastal landscapes developed during the 2019 survey season.

The event will focus on Irish seabed mapping activities related to marine science, biodiversity, heritage and tourism in coastal communities. The event will feature an exciting line-up of experts presenting on; shipwreck mapping and archaeology, ocean literacy, marine ecology, ocean energy and infrastructure, as well as submerged and coastal landscapes and the connection between marine tourism and Fáilte Ireland’s Wild Atlantic Way.

“Ireland is an exemplar internationally in demonstrating best practice in ocean governance, through mapping, observing, predicting and managing our marine territory and resources. Connecting society with the value and importance of our ocean wealth is critical if we are to address today’s challenges, including climate change and population growth” said Dr. Peter Heffernan, CEO, Marine Institute.

Minister Canney stated; “INFOMAR, Ireland’s internationally renowned seabed mapping programme is an impressive example of inter-agency cooperation within the Government of Ireland. By holding its annual seminar event in Dingle Co. Kerry, I’m delighted to see the programme engage with its stakeholders at a local level, conveying its role in supporting the development of industry, research, heritage and tourism within coastal maritime communities”.

The INFOMAR Seminar will take place in the Dingle Skellig Hotel on Wednesday 16 and Thursday 17 October 2019. The event will include a special commemoration of the achievements of the Irish Baselines Project, and a live cast to MAREANO, the Norwegian marine mapping programme.  Norway has just announced a new coastal mapping programme similar to INFOMAR which will complement the offshore activities of MAREANO. The event will conclude with a behind the scenes visit to Dingle OceanWorld Aquarium and to one of Ireland’s State research vessels, the RV Keary.

The event is open to all members of the public and interested people should register through the INFOMAR website www.infomar.ie