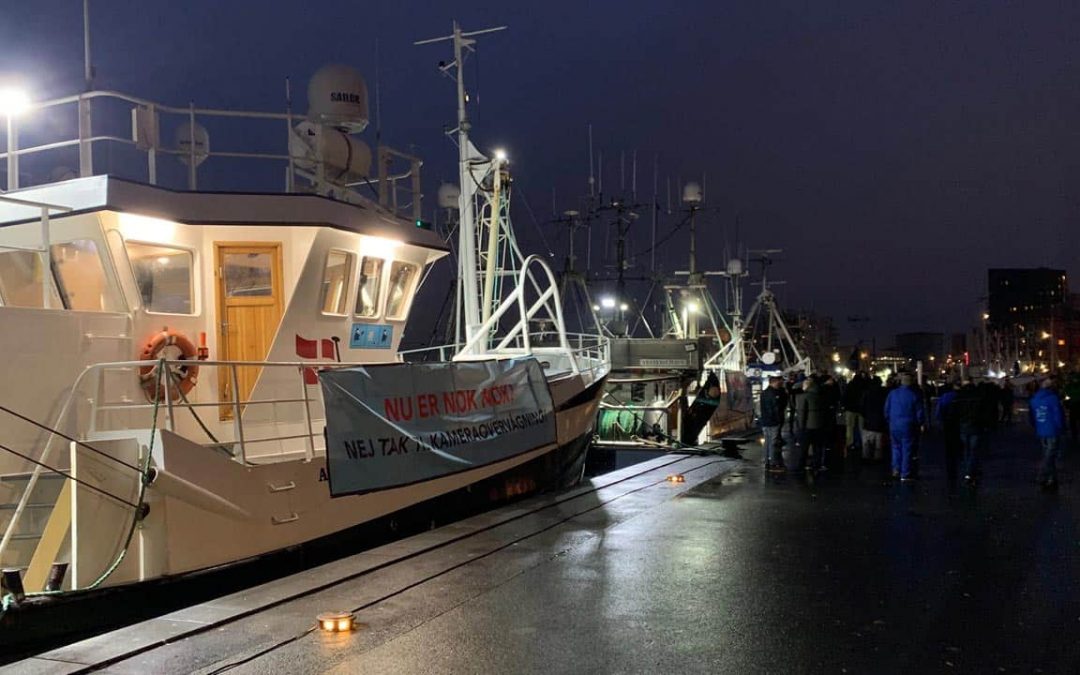 Danish fishermen gathered today (January 31) in Aalborg to protest plans to make camera surveillance mandatory for vessels fishing in the Kattegat and against their continued treatment by authorities, reports FiskerForum.

Steaming into Limfjord early this morning, a fleet of around 40 fishing boats tied up in the centre of the city, before crews made their way through the streets to the city’s Congress and Culture Centre carrying ‘Enough is Enough’ and ‘No to Cameras’ banners.

In a display of unity rarely seen, the answer from Danish fishermen to the question of camera surveillance is a resounding no, say organisers. Among their demands, the fishermen are calling also for an end to the constant suspicion of the industry which, they say, has become a trademark of official dealings with the sector.

“We’re treated like criminals,” said Thomas Christiansen, one of the protest organisers. “And we say stop. Enough is enough.”

Though mandatory cameras may be the straw that broke the camel’s back, the measure is just one in a long series of issues over the past number of years that fishermen in Denmark say have made their livelihoods increasingly untenable.

Massive cod cuts, the ongoing Brexit saga and now the issue of camera surveillance have left the sector in an almost permanent state of uncertainty – a state which has only been compounded by a torrent of regulations which, fishermen say, are designed to frame them as villains, and together have made their ability to continue making a living from the sea almost impossible.

A Læso trawlerman, Thomas Christiansen is but one fisherman who has already put his boat and quota up for sale and plans to leave fishing for good.

“It’s hard enough as it is being a fisherman,” he said.

“We do our best to keep our heads above water, in spite of the constantly changing regulations that not only affect the way we work, but also rule out any possibility of establishing a stable family life.”

“We have had enough of politicians who promise everything, and we have had enough of officials and politicians who take no notice of what the industry has to say, yet make decisions that affect our everyday lives,” he said, as the protest got underway this morning, ahead of a planned meeting between Minister of Fisheries Mogens Jensen and the Danish Fishermen’s Association.