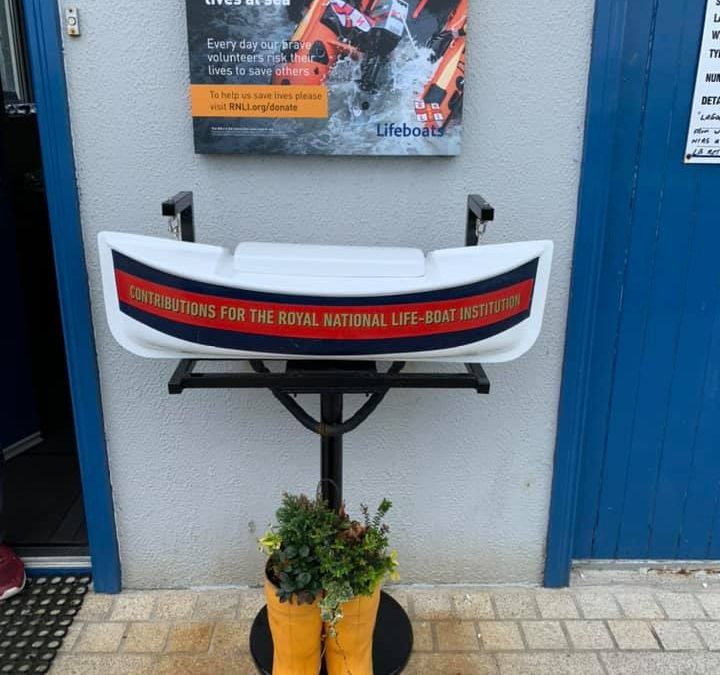 The contents of the charity box which has been on display in front of RNLI Donaghadee Lifeboat Station for many years has been stolen. The discovery was made by the station’s full-time mechanic on his way into work on the morning of Friday 7 August.

The ornate lifeboat shaped donations box has been on display on the shorefront in Donaghadee for well over 10 years and this is the first time there has been money stolen. During the summer months, it can gather up quite a substantial sum.

Speaking on behalf of the station, Chairman Alan Couser commented, “Everyone at the station, crew, fundraisers and operations team alike, are all incredibly disappointed and genuinely shocked that this has happened. After so many years of being on display the thought that some elements of society have reached the point of stealing from a charity that has men and women voluntarily going to sea to save lives is dreadful.

“On the flip side, the generosity of donations being made via our social media page has been phenomenal. We have had support from many local businesses both financially and offering practical help so that this doesn’t happen again. This is a truer reflection of the local and wider community we live in, we are extremely grateful to every single person that has donated and very touched by the support shown.”

Lifeboat Operations Manager, Brian McLawrence also said, “If anyone has any information or noticed anything untoward along the shore front in Donaghadee in the early hours of Friday the 7th of August morning we would encourage you to contact Newtownards Police Station where the incident has been logged.

“The majority of fundraising activities have been suspended due to Covid-19 which makes this incident even more disappointing, Donaghadee has been very busy so we would have been expecting quite a large sum from this box as it is a popular stop for people to pop some money into while going for a walk up the harbour, hopefully we are able to apprehend the culprits and prevent another potential theft from someone else.”