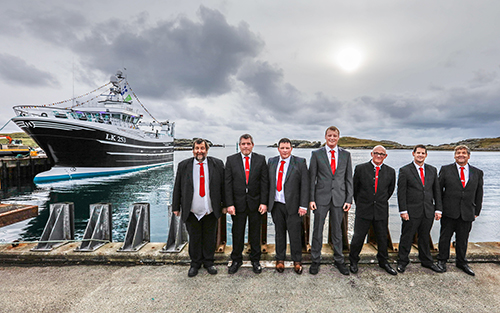 A MASSIVE BOOST TO SKERRIES

The arrival of a brand new state of the art whitefish trawler at the outlying community of Out Skerries has been described as a major boost to the small community by skipper Leslie Hughson.

Built at Mooney Boats yard in Killybegs the Ocean Challenge arrived in Lerwick before heading to her home port of Skerries for the naming ceremony.

Back in Lerwick  to take on gear ahead of fishing trials, Hughson said sailing the new vessel home to Skerries had been a “proud moment”.

And while making a living in Shetland’s outlying islands has become more and more difficult, Hughson says Skerries is very much home and he and his wife Diane were trying to spend at least most weekends on the small island group.

The Ocean Challenge joins the Renown and Sharyn Louise who are also both registered in Skerries.

Most of all, however, the new 28-metre trawler is a statement of confidence in the future of fishing beyond Brexit, and as such an investment into the next generation of local fishermen. Leslie’s son Steven is currently second skipper.

The new £5 million vessel was initially due for delivery in June this year but the coronavirus pandemic caused a delay after the shipyard in Donegal was forced to close down temporarily.

Hughson said the trawler had been ordered after the previous vessel Ocean Way sunk in March 2017 and crews and quota were transferred to the company’s other vessel Fairway.

They soon realised that they required a new vessel, Hughson said, and placed an order with Mooney Boats “who we were introduced to during the Skipper Expo Aberdeen three years ago.”

Speaking to The Skipper, Yard Owner  Lee Mooney said: “The ‘Ocean Challenge’ was a rewarding yet challenging build for Mooney Boats ltd at 28.50 LOA she was the largest boat completed by the shipyard to date.We Would like to thank Leslie and the Hughson family for choosing our shipyard for the construction of Ocean Challenge. We wish them all the very best and safe fishing for many year into the future.”

Arriving from the initial yard of construction in Poland the hollow hull began fit out in the first quarter of 2020. Unforeseeable at the time a global pandemic was about to take place., like many industries, Mooney Boats quickly found ways to adapt due to the vessel owners being unable to travel to the Donegal based shipyard.

To overcome this Mooney Boats ltd Design team began sophisticated 3D design drawings of various layouts which were sent digitally to vessel owners to review and walk around proposed designs on their mobile devices such as iPad and Laptops.

From the success of these 3d design drawings Mooney boats Ltd where later tasked with designing the fish processing system, a first for the shipyard. Using the latest 3D software, the yard digitally designed and rendered the fish processing deck for approval by the owners in Shetland.

At 28.5 metres with a beam of 8.7 metre, the new vessel is powered by  an ABC 6DZC engine with two auxiliary engines Caterpillar all from Padmos,  while gearbox and propellers have been supplied by Heimdal.

The new Ocean Challenge is larger than the Ocean Way, offers significantly more safety at sea and while fishing, and also brings more comfort to the crew quarters.

In typical Mooney Boats style the accommodation areas of the vessel is modernised as we’ve come to expect. LED strip lighting guides you around the accommodation areas. 24” Flatscreen tv’s can be found in all 7 cabins while the mess boasts a 55” screen and comfortable crew seating with built in USB charging ports. A Decorative glass partition depicting the vessel side profile breaks the Mess area from the Galley. Underfloor heating throughout the two accommodation decks creates a comfortable area of rest.

RAPP  supplied the complete trawl and deck machinery equipment on board the vessel based around  3 x 800 fathoms  capacity Type TWS2521S Trawl Winches controlled by a Rapp Hydema Trawl Computer with PTS-Pentagon CbusHF.

There are also possibilities to integrate the system with sonar & echo sounders.

RAPP Service Manager Drew Elphinstone and Technician Alan Candy worked closely with Mooney Boats to commission and test all the systems before Ocean Challenge left Killybegs and they will also attend the vessel in Shetland for fishing trials.

KER Group supplied and installed the full refrigeration package  on the new Ocean Challenge. “We were delighted to be awarded the contact,” says Derek Mc Brearty. “The process was simple, Leslie knew what he wanted to achieve, and we offered the solution.”

The fish hold evaporator consisted of 700 mtrs of stainless steel pipe specially designed with close radius bends to achieve maximum surface area coverage. The system is fitted with temperature control system. The ice machines were fitted over each other on stainless steel framework. Chute to carry the ice to the locker was manufactured from PE plastic completed with inspection hatches.

All pipework from the seawater pumps was installed using marine grade stainless steel pipe and all Tig welded to ensure the longevity of the install. All electrical panels for the refrigeration and ice machines were manufactured, installed and terminated by KER Group engineers.

SAFETY AND HYGIENE  FROM PBP

During installation onboard Ocean Challenge the four-layer resin compound application was installed and fully cured in each area within two 24-hour working shifts with the experienced team working hard and efficentley throughout the night to a strict application system which can not afford any miscalculation as the rapid curing of the process could go drastically wrong if not applied correctly by experienced personel and, working to this schedule allowed for the shipyard workers to continue uninterrupted with their normal start time the following morning and with their work schedule for that day ahead.

Each layer in the four-layer system fully cures within one and half hours at temperatures as low as -30 degrees – meaning that this coating system has also commonly been used within refrigerated rooms and cold stores in previous projects.

On Ocean Challenge, the trawl deck had the areas between the sacrificial flat bar deck protection strips brought back up to level of top of the flat bar before having the four-layer application fully installed from the trawl winches and net drums all the way back to the stern shooting gate and inside the stern rails. The net tracks were left in a smooth resin finish to provide ease of shooting and hauling in order to prevent the netting sticking and fraying.

The areas outside of the net tracks on the trawl deck, as well as down below in the fish handling and processing deck, had the FB quartz system applied in order to enhance anti-slip properties on these decks.

Skipper Hughson said they had a crew of seven at the moment but were planning to introduce a two-shift system employing 11 people. With the Fairway sold to a new partnership in January this year, Hughson and his men are ready to get going, particularly at a moment in history when big changes to fishing are just around the corner.

“There are far too many foreign boats fishing around here which after all are our own waters,” he said, adding that as much as 70 per cent of the local fleet’s traditional fishing grounds were taken up by gill nets set by French and Spanish vessels.

Hughson said that he and his crew also have had several encounters with those vessels over the years, including two memorable moments with the German registered Pesorsa Dos who has been in the headlines lately.

He said he was well aware that it would take some time for changes to be implemented once the UK had become an independent coastal state, but the direction of travel was clear in that the presence of EU-registered vessels in Shetland waters would be reduced.

And that, he said, “can only be a good thing for the fishing industry here in Shetland.”

The Skipper would like to wish Leslie, Steven, Family and crew many years succesful fishing with Ocean Challenge.

The extensive electronics systems for Ocean Challenge were supplied by Scalloway based H. Williamson & Sons Ltd, and due to the Covid restrictions on travel, installation was carried out by Barry Electronics engineers. 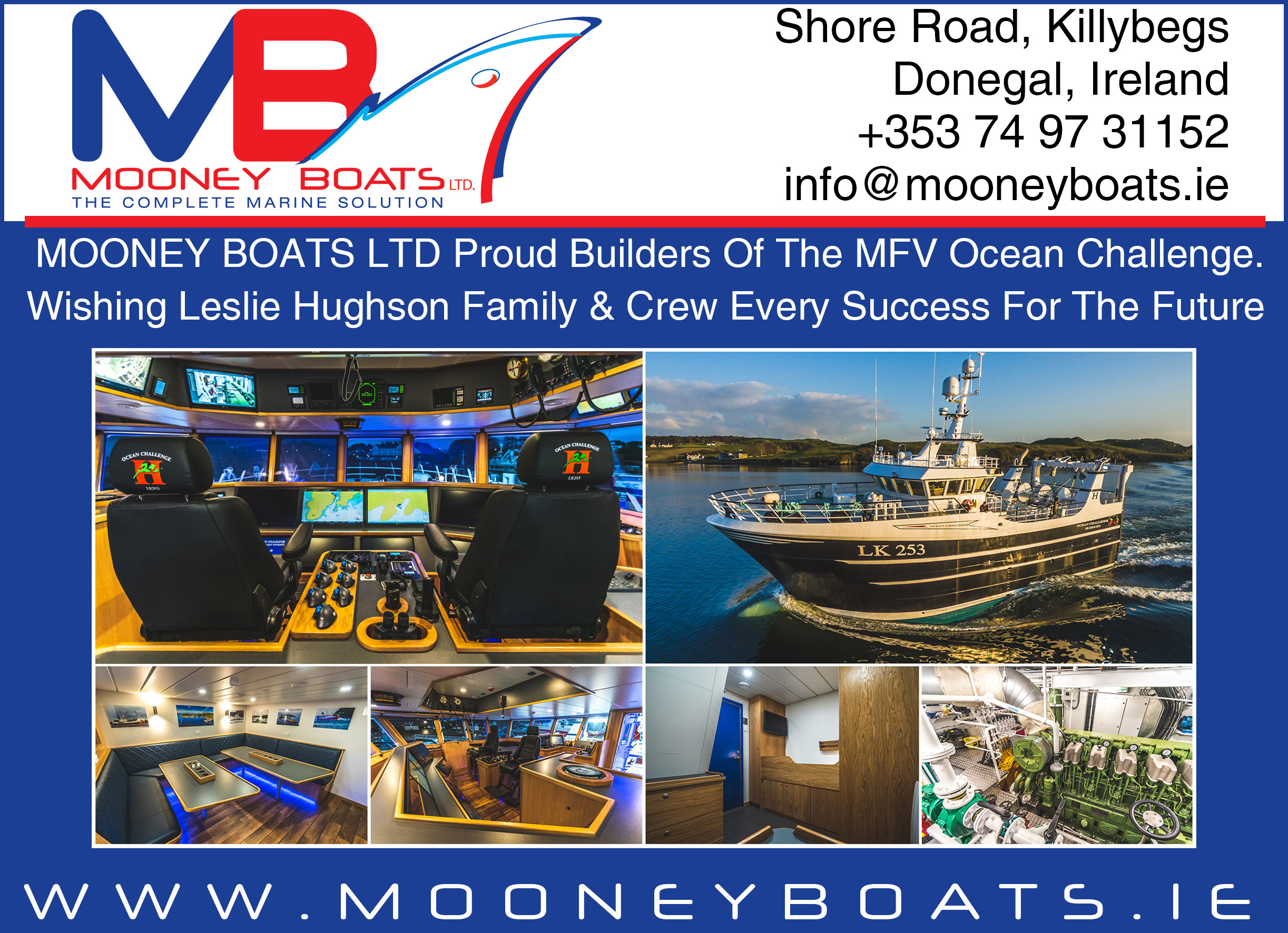 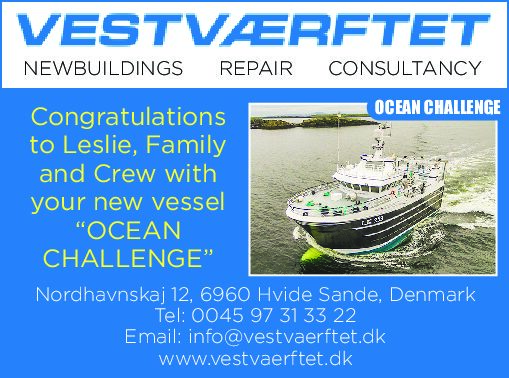 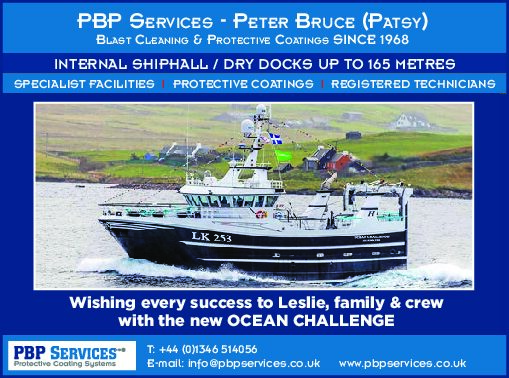 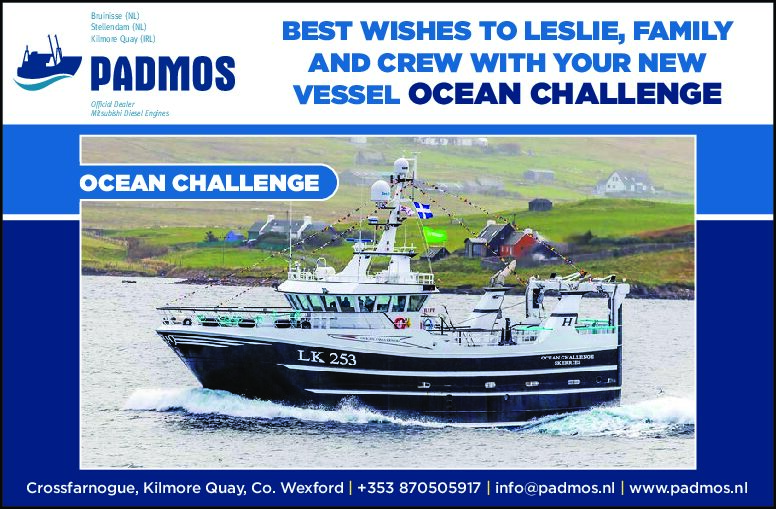 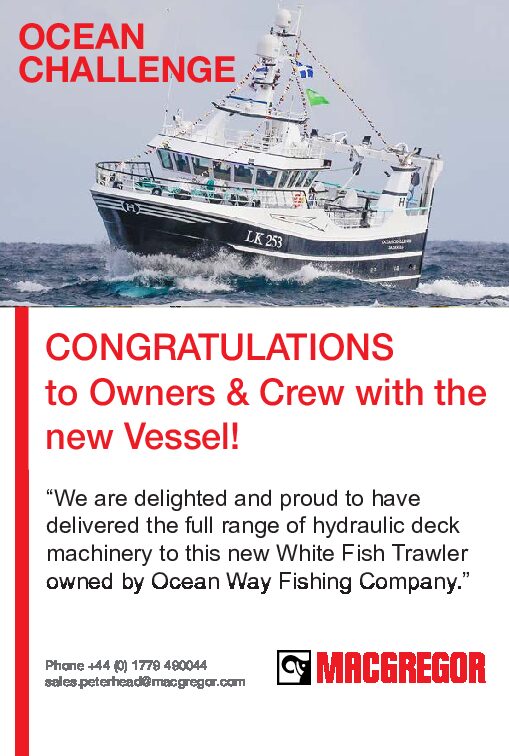 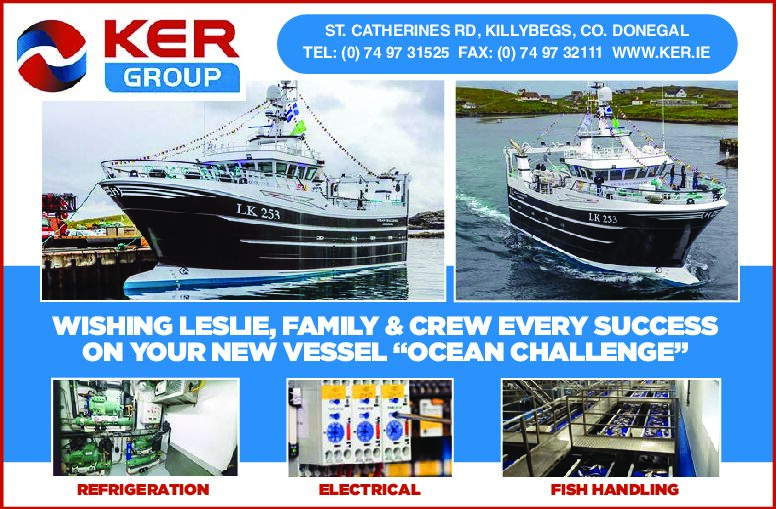 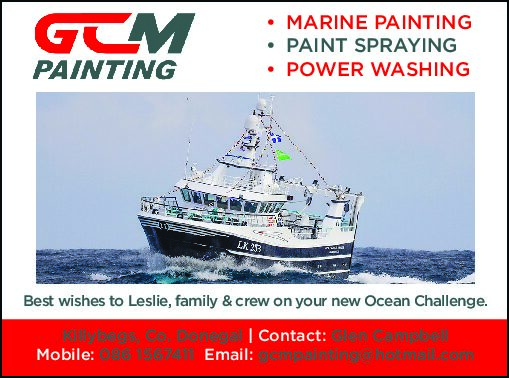 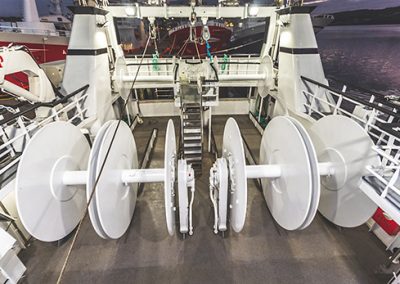 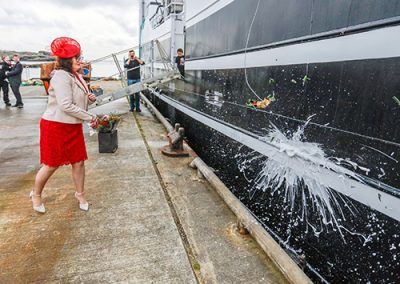 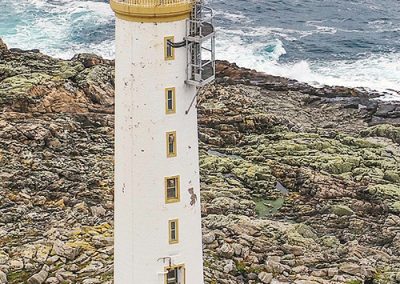 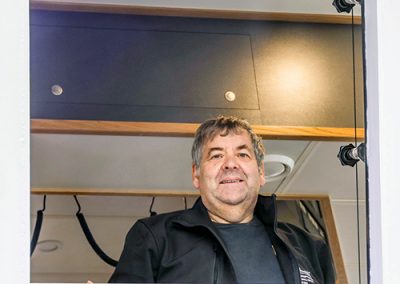 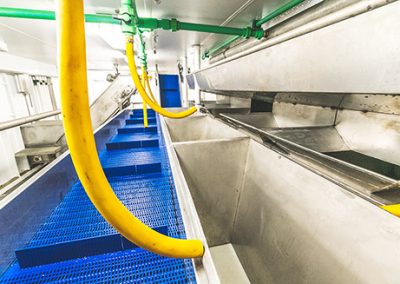 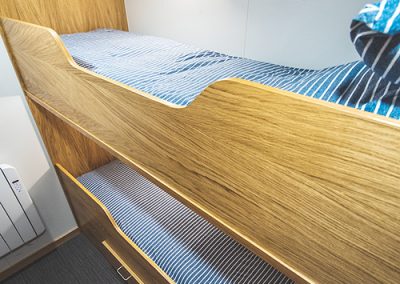 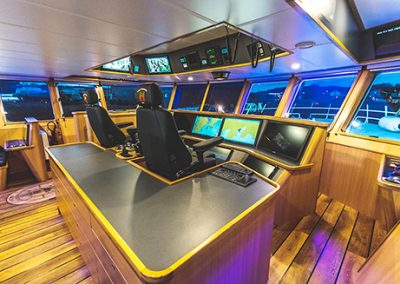 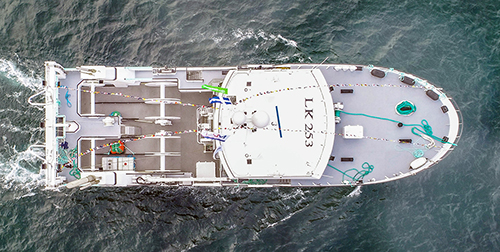 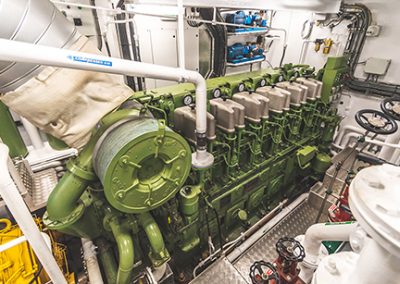