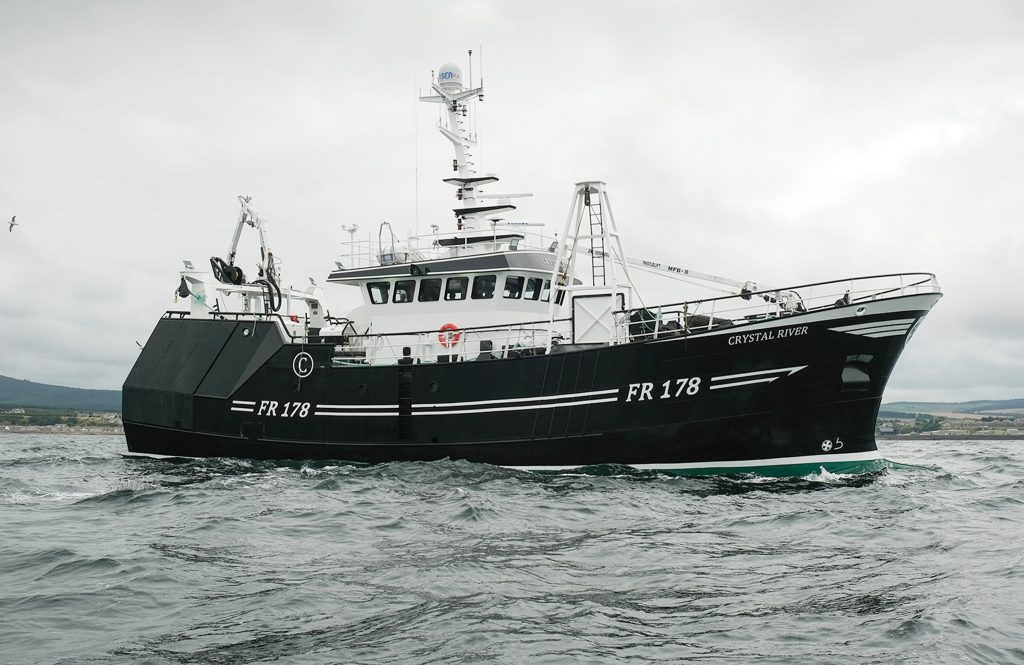 Macduff Shipyards Limited are delighted to announce the recent handover of two fishing vessels, the ‘Faithful FR 129’ and the ‘Crystal River FR 178’ to their respective owners Stewart Buchan and David Cardno of Fraserburgh. These vessels operate exclusively as a pair trawl team fishing out of their home port Fraserburgh, and have the distinction of being the yards first new build pair trawl order in over thirty years, the previous vessels being the wooden hulled ‘Solitaire’ and ‘Sonia Jane’ built in the 80’s.

To deliver the vessels at the same time the production was split between the yards facilities with the Faithful being built in the Macduff main fabrication hall and the Crystal River being built in the Buckie fabrication hall. To assist with the build schedule, many of the steel units for the Crystal River were also built in Macduff before being shipped by sea to Buckie for assembly.

As with all industries, the yard faced many struggles incurred by the Coronavirus pandemic which delayed the building schedule for both vessels and subsequently made delivery at the same time challenging however the yard managed to delivery both vessels within three months and would like to sincerely thank both Stewart and David for their patience.

The Faithful and Crystal River have been built to an identical design and share the same hull form as the Good Hope FR 891, also built by the yard in 2019. The hulls measure 26.50 m length overall with a registered length of 23.95 m, 7.80 m breadth and 4.20 m moulded depth. This hull form was developed using CFD technology, assisted by the Wolfson Unit in Southampton, to interrogate and optimise their design to reduce resistance and fuel consumption whilst also allowing for the large volume fish holds which can carry 1,150 fish boxes per vessel.

As typical for the yards new builds Macduff Ship Design played a crucial role in developing the hull model, fairing its lines, analysing the stability, draughting a full set of structural plans and producing a computer ‘kit’ of steel parts required to build the hull.

The ‘kit’ was then nested, and CNC machine profiled by Macduff Profilers, a division within the Macduff Group, with the Lloyds Grade A ship building plate parts being delivered to the fabrication halls for assembly. As is typical, the wheelhouse and masts were built from marine grade aluminium to save weight. 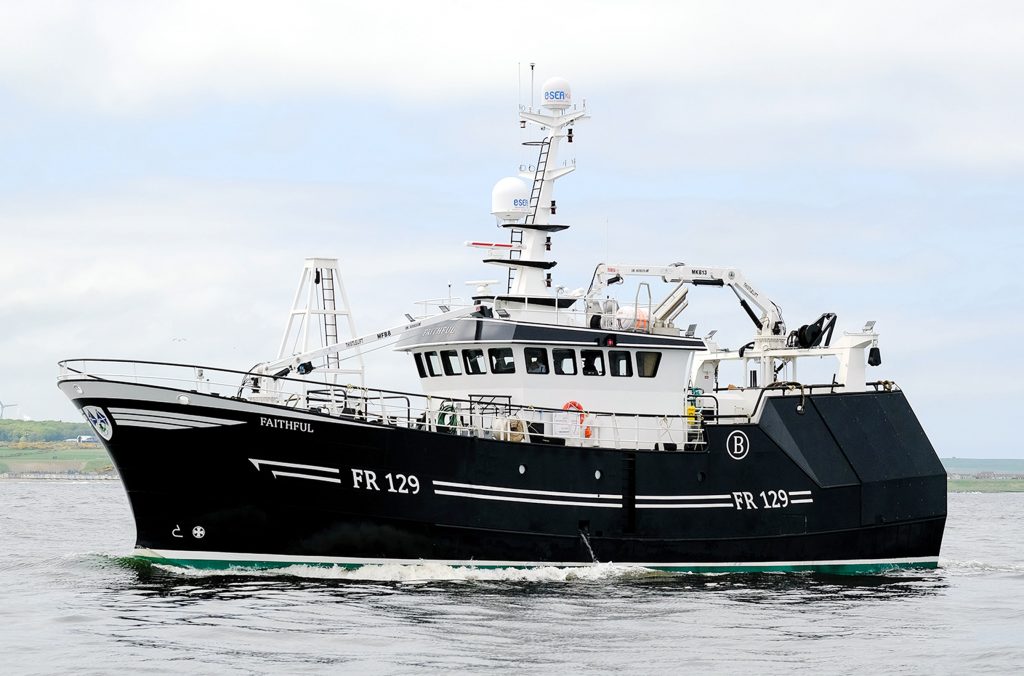 A hydraulically powered bow thruster is also fitted of 280 hp. The hydraulic system, designed by the yard, is cooled via a Blokland box cooler and Bowman heat exchanger.

The yard has now fitted seven vessels with this propulsion package in recent years which has demonstrated itself to be both robust and adaptable with the Wide Operating Speed Range of the C32 main engine providing flexibility to achieve full power from a fixed pitch propeller both whilst steaming and trawling.

The efficiency gains predicted during the early design phase were realised during engine trials with the vessel achieving 9.0knots at only 50% engine load and 10.7 knots at 100% load. Both vessels also feature a triple rudder system along with a modern high lift propeller nozzle provided by Wartsila.

Cooling systems for all engines and hydraulics onboard are served by box coolers supplied by Blokland Non-Ferro. Electrical power onboard is provided by two Mitsubishi generator sets supplied by Macduff Diesels Limited, each with a rating of 98 ekW and of sufficient size to run the vessels power independently providing complete redundancy.

The fish processing decks features a tailor-made catch handling system built by the yard from the owner’s design. Two separate compartments are formed within the fish processing area which both contain a 2.5 t Geneglace ice machine and associated plant. The fish hold refrigeration system along with ice machines were supplied and fitted by Premier Refrigeration.

The high specification electronics package was supplied and fitted onboard by Woodsons of Aberdeen and Trawl monitor sensors were supplied and installed by Scanmar Ltd.

Woodsons of Aberdeen supplied and installed the complete electronics and navigation packages to both the Faithful and Crystal River. 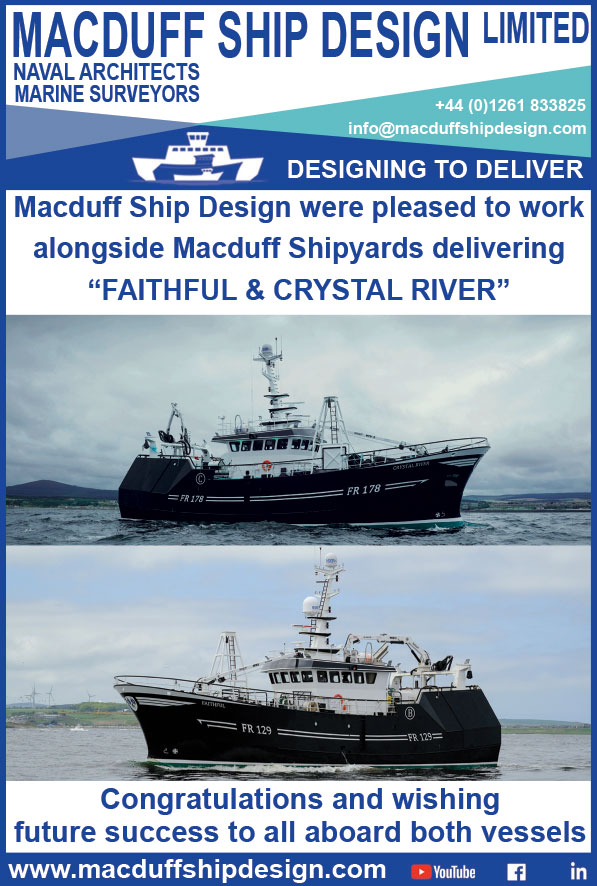 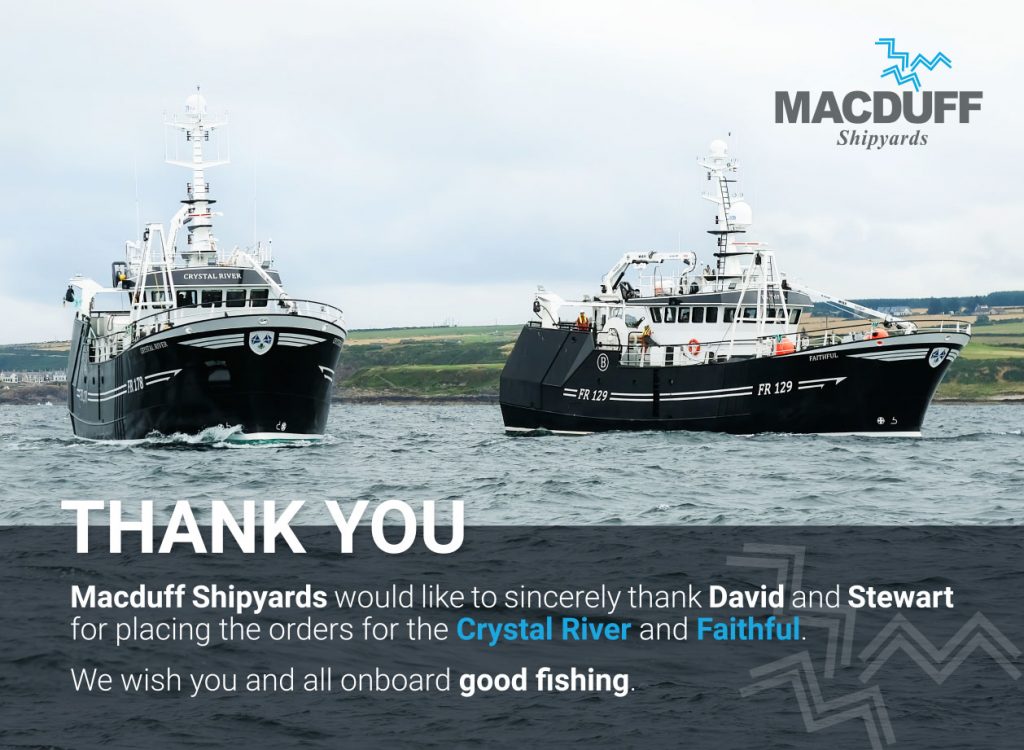 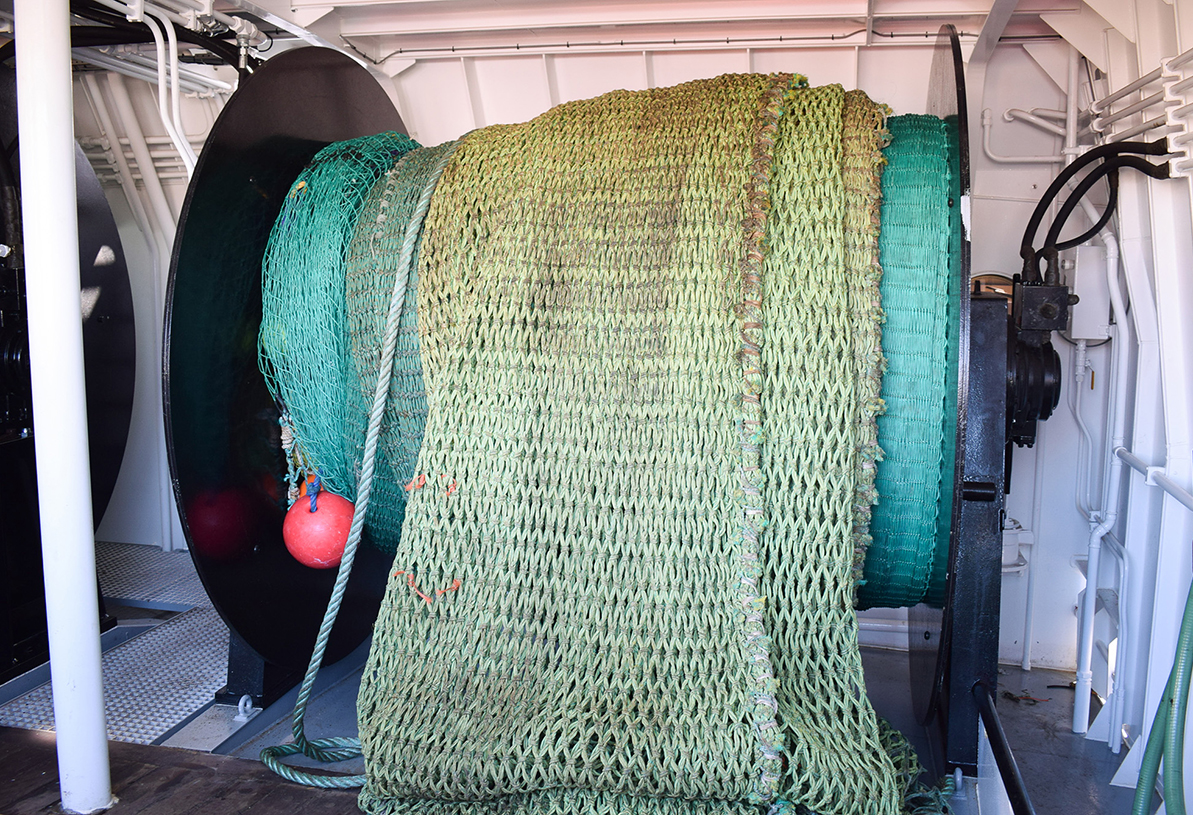 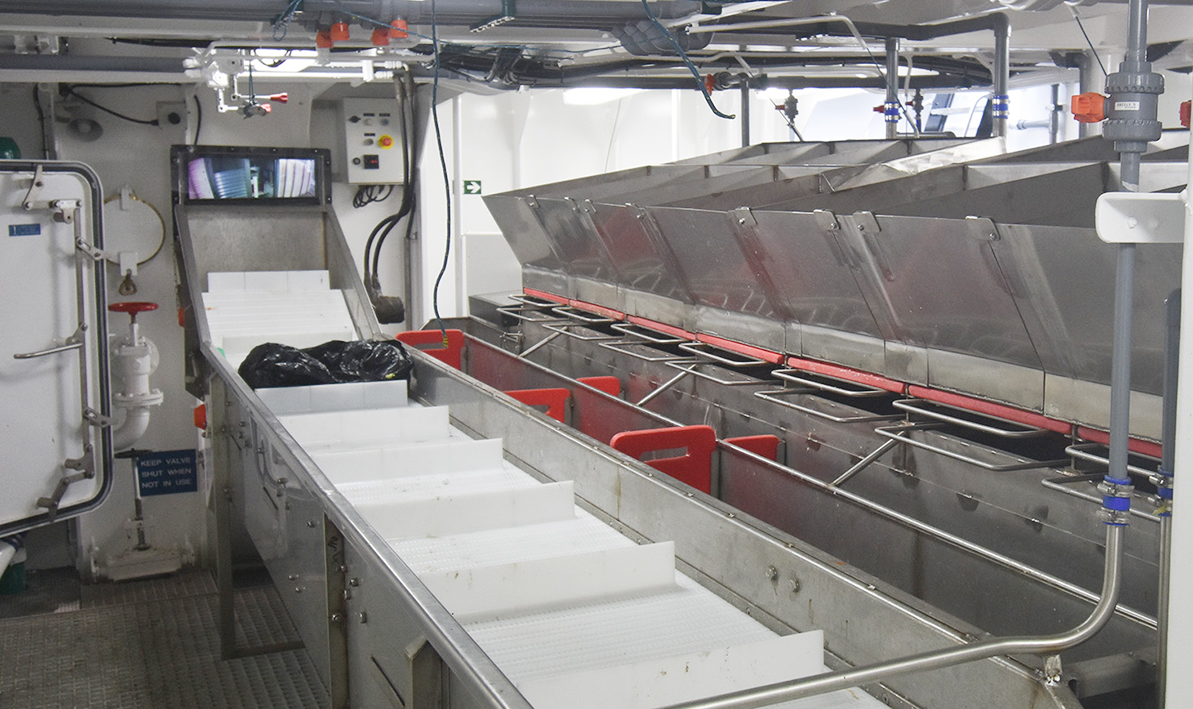 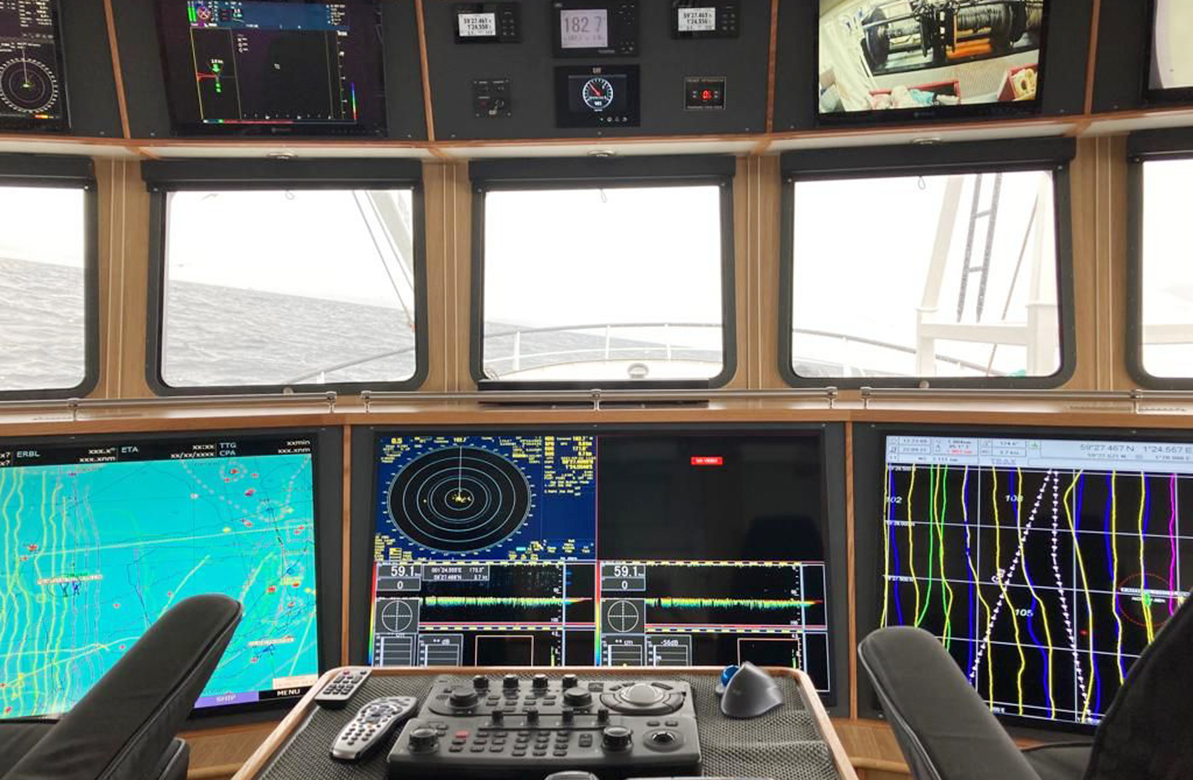 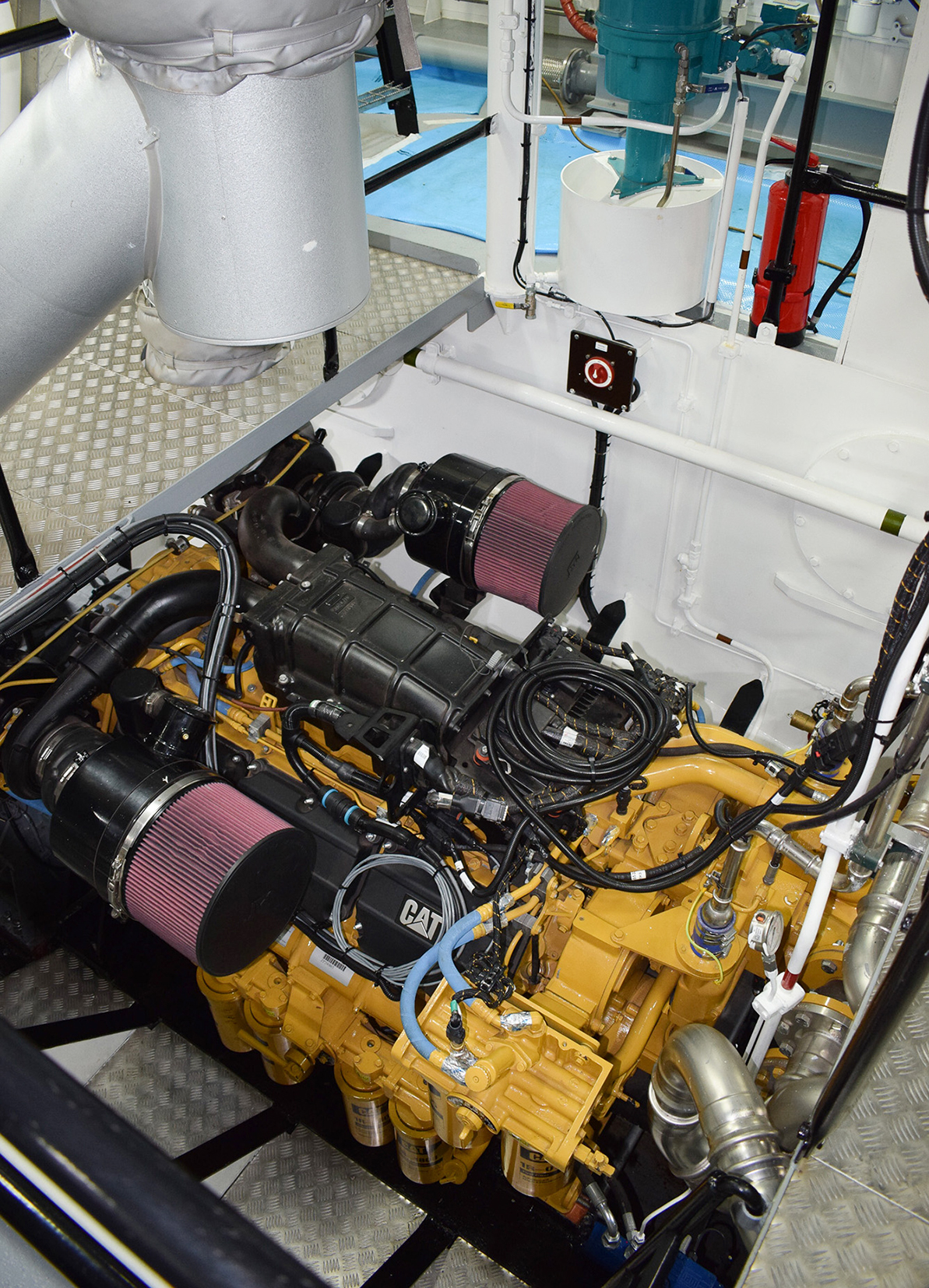 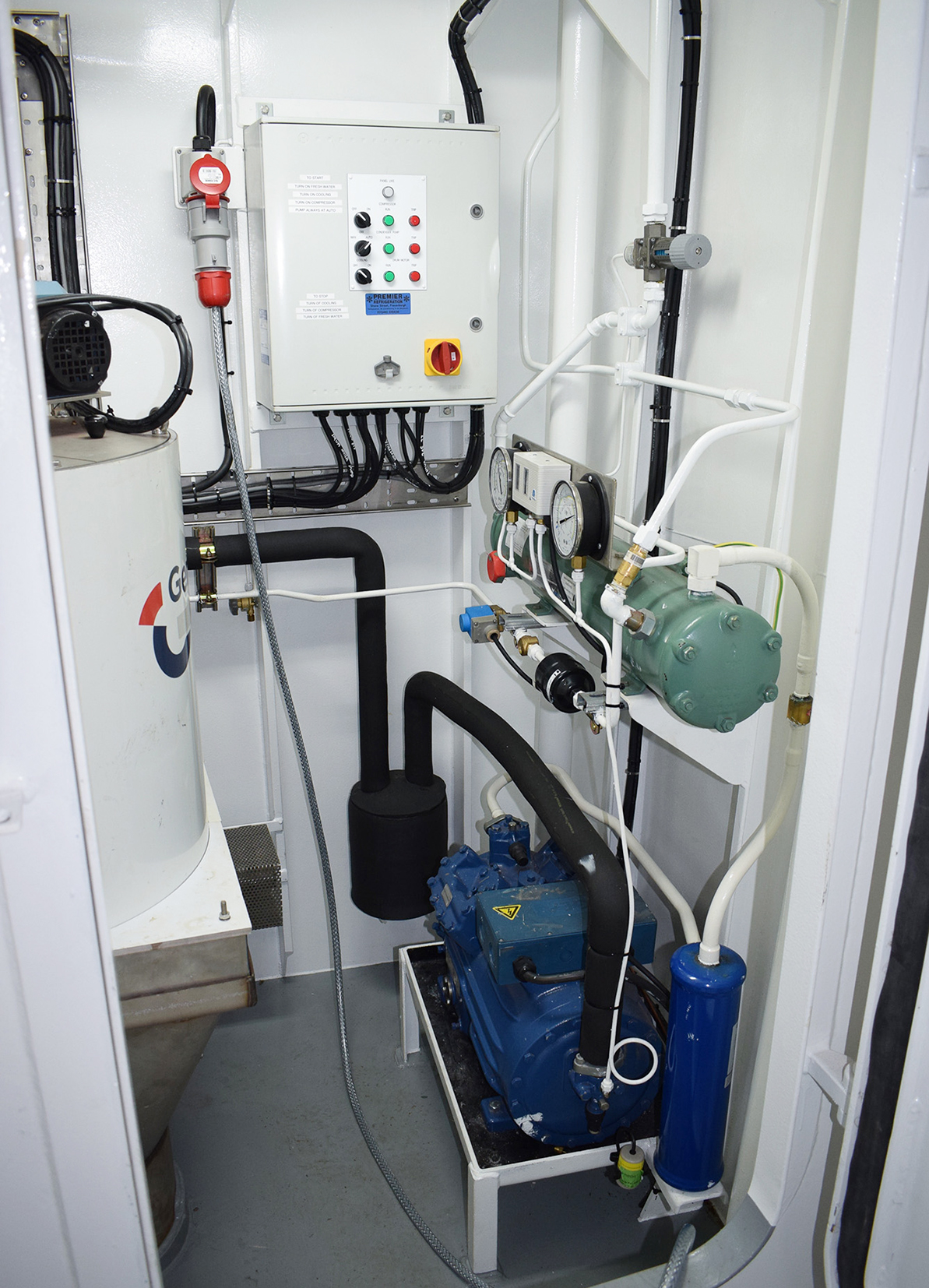 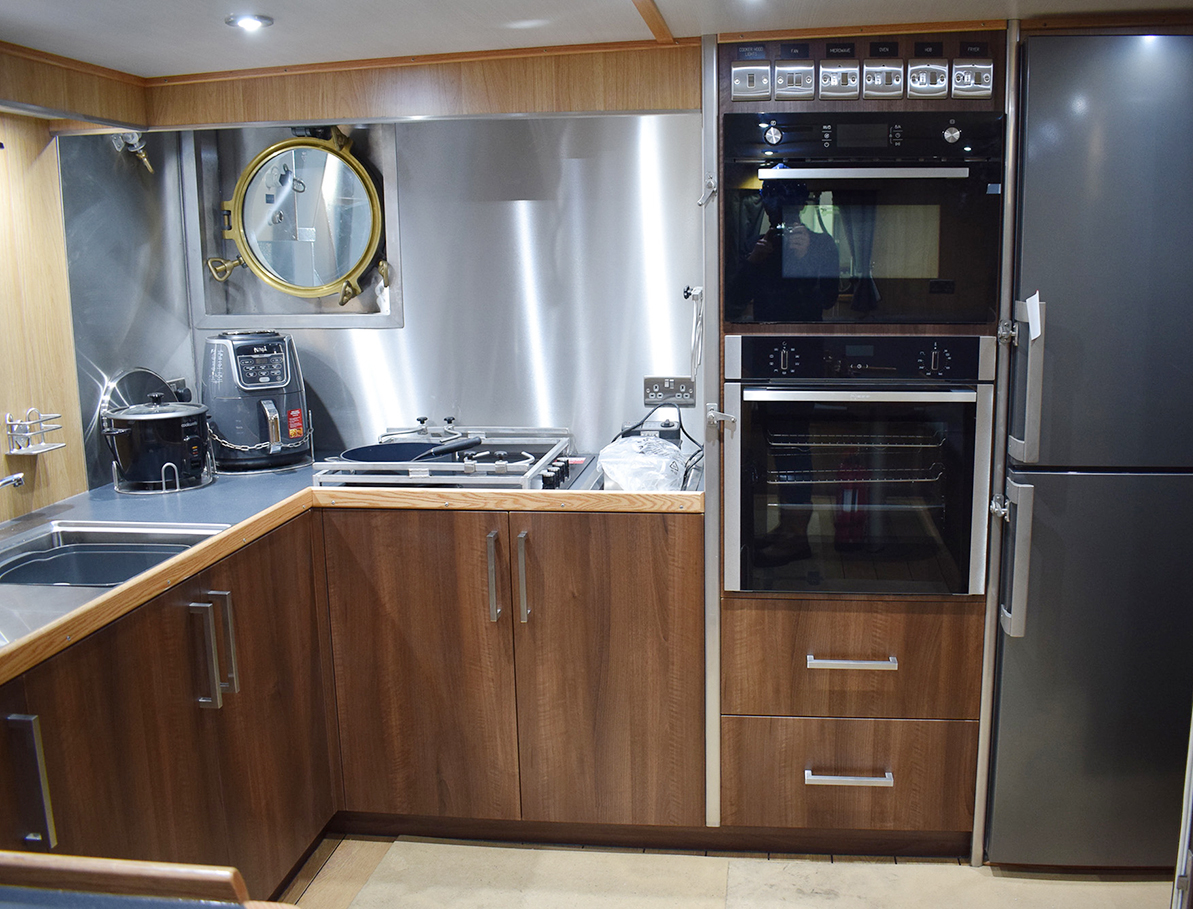