A better take on Antarctic toothfishing – right down the line 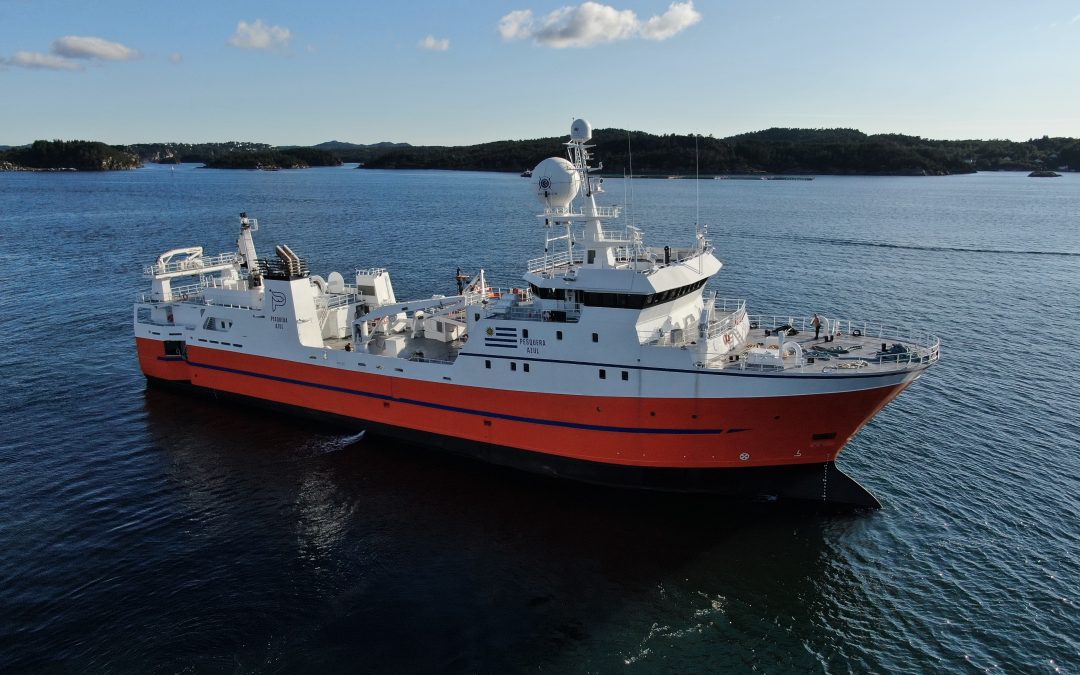 When asked why a group of Norwegians would go all-in for longline fishing in Antarctic waters, oceans apart from their North Sea home base, Arne Birkeland has a disarmingly sincere reply: “We are fishermen,” explains Birkeland, CEO of Pesquera Azul, a Norwegian-owned longline fishing company operating out of Uruguay. “Any new opportunity in the fishing industry is exciting for us.”

Birkeland and his founding partners see huge potential in the Patagonian Toothfish industry, not least because the current fleet is characterised by ageing assets and inefficient methods. With an innovative new vessel design and longline technology to increase both volume and quality of the catch, Birkeland and Pesquera Azul are set to change all that.

Arguably the main challenge for longline toothfishing is the whale population taking fish from the lines in large numbers. Studies have shown that as much as 70 per cent of the catch is devoured by whales. “This reduces the catch, and depletes fish stock as well,” says Birkeland. “Toothfish stock is slow to build. If we can reduce the number of caught fish needed to fill quotas, we can help maintain the strength of the stock.”

Pesquera Azul’s innovative “Sago Extreme” concept, developed by Sago Solutions AS, encloses the catch using a cage that runs along the line, collecting and protecting live fish until they can be landed in the boat. Damage to the fish caused by gaffing when hauling laden lines is also eliminated.

“Some of the most productive fishing grounds are contaminated by lost equipment,” says Birkeland. For years the fleet has had to avoid these good fishing grounds due to these so-called “ghost lines”. Now Pesquera Azul is taking initiative for the cleanup.

Their new vessel, Ocean Azul, will be equipped with the “Ghost Gear Cleaner” toolkit to collect lost gear and return it to shore. The new boat will also employ stronger line to reduce breakage, thus reducing both lost catch and lost gear.

“Our goal is to have a vessel that retrieves more lines than it loses,” Birkeland states.

Meeting the challenges of Antarctica

Ocean Azul is designed and built specifically to face challenging Antarctic conditions, a departure from current practice, Birkeland relates. “Most longliners operating today are under-dimensioned for the Antarctic climate, and there are frequent incidents of hull damage due to ice.”

Ocean Azul is built to the highest ice class for commercial vessels, ensuring a higher level of safety for both the crew and the environment. “We have also installed a redundant power supply, to ensure safe return to port in the event of main power plant failure,” he says.

A key feature of the new vessel is an extension housing the “Sago Pool”, an adjustable opening in the bottom of the ship that allows landing the catch in a protected space, as opposed to landing lines on the side of the vessel or in a traditional moon pool. In addition, the Sago Pool improves working conditions by calming the waves inside the pool.

Baited lines are also deployed from the enclosed Sago Pool. Traditional methods expose the lines to sea birds that get caught when they try to feed on the bait. “By deploying the line from inside the ship, we can eliminate this risk to the birds,” Birkeland says.

Using model testing of the design, the team has learned that the Sago Pool itself reduces long-ship movement by 40 percent. “This makes it easier to work in the aft section of the boat, which was has been difficult with traditional design due to excess vessel motion,” Birkeland says.

In addition to the operational advantages provided by Ocean Azul, there is the economic benefit for the local and regional economies. “We have a local representative running the company in Uruguay, and the Ocean Azul will be an Uruguayan-registered vessel employing local crews,” Birkeland says. He reports that the overall enterprise should create 40-50 new local jobs.

“Sustainable fishing is a high priority for regional and local authorities, and our concept can help them achieve this goal,” says Birkeland. “A big part of what we are doing is helping to bring a higher standard of operations to the region.”

Ready to go to work

After experiencing construction delays, the new vessel is basically ready for deployment, Birkeland says. “Covid-19 restrictions have made transportation of the necessary expertise to the yard a challenge, but we have now made arrangements to get people where we need them.”

The Sago Extreme fish protection solution is also ready to go. “The equipment is on the quayside, ready to deploy,” Birkeland confirms. “The concept has been around for a while, but we have leveraged the technology and experience needed to put it to work.” He notes that support from Innovation Norway has provided a welcome boost to the development process.

While the innovative technology has been fully proven in sea trials, Ocean Azul is capable of employing traditional methods if needed. “This is not a gamble,” Birkeland assures. “We have backup systems that will allow us to operate even if we experience difficulties with the new systems.”

Pesquera Azul will be conducting tests of the new systems as they go along, providing an objective comparison with traditional methods, Birkeland tells. The tests will be documented by third parties to ensure validity, including local scientists and experts.

Citing this and other examples of bilateral cooperation in the project, Birkeland views Pesquera Azul as a joint Norwegian-Uruguayan project: “We are in contact with the Uruguayan authorities in order to present the benefits of this project to both countries, and to Antarctic longline fishing.”

He notes that the foreign ministry of Uruguay has expressed their support for the project. “Uruguay wants to be known as a secure investment environment, and we feel confident in getting their full support for this significant investment in the Uruguayan economy.”

Arne Birkeland feels certain that the Ocean Azul concept is an idea whose time has come: “We can improve the catch and strengthen fish stock, while significantly improving working conditions and safety for crews,” he concludes. “At the end of the day, these are the things that really matter for everyone in the fishing industry.”