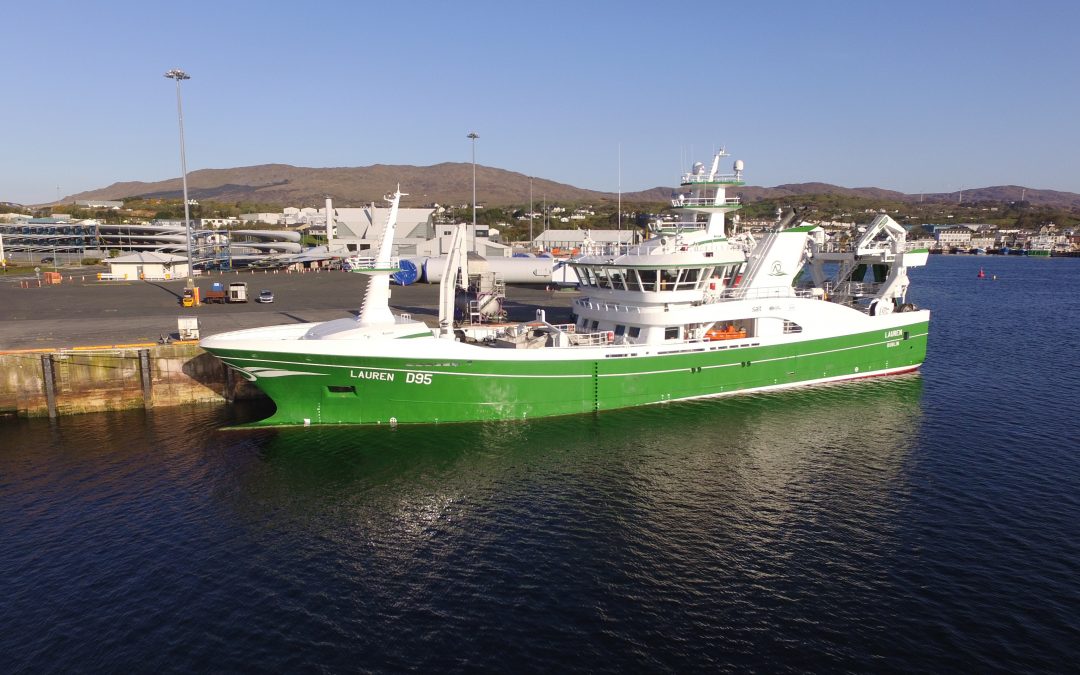 Over 1,000 tonnes of freshly landed, high-quality Blue Whiting were rendered unfit for human consumption in Killybegs at the weekend, due to a new State-imposed weighing regime. Over 50 fish processing workers were sent home as a result, all of which will hit the local economy hard, say fishing organisations.

The Irish Fish Processors and Exporters Association (IFPEA) say the new weighing regime forces the draining of refrigerated sea water from the fish storage tanks. “This dewatering breaks the cold chain and also results in the fish being compressed during transport,” says IFPEA chief executive, Brendan Byrne. “The fish become unfit for human consumption as a result of this process.”

“No other EU country is being forced to adopt such an unworkable regime, so Ireland’s fishing industry is now being put at a huge competitive disadvantage. The Irish Sea Fishery Protection Authority (SFPA) are imposing the new weighing system, despite a High Court ruling that authorities should introduce an alternative system. We call on the Government to halt the new regime immediately and implement the High Court ruling.”

Aodh O Donnell CEO of the Irish Fish Producers Organisation said the weighing debacle must be addressed urgently “or displacement of supply could result in the loss of up to €40 Million annually.  The current scheme presents a severe challenge for Irish ports, striving to attract landings for Irish seafood processors. Already vessels have clearly stated that they are not prepared to land their fish in Killybegs, due to the unreasonable and unworkable weighing obligations imposed upon them.”

Mr O Donnell says it’s also damaging to the reputation of quality Irish seafood and is losing business for our seafood exporters. “Ironically, Irish Seafood Processors are exhibiting at a Bord Bia 3-day International Seafood Show this week in Barcelona. International customers will be uneasy if there is a possibility of Irish fish quality being compromised by dewatering procedures or undue delays in the freezing of fish after catching.”

In this latest incident, Brendan Byrne of the IFPEA says the new state of the art fishing vessel, ‘MFV Lauren’ returned after her maiden voyage to her home port of Killybegs at the weekend.  “The Master and crew were extremely proud of this first landing of over 1,000 tonnes of high-quality Blue Whiting. Upon arrival at port, this landing was subjected to a ‘full monitor’ or control weighing by the SFPA.”

“The SFPA unilaterally introduced a  controversial change to fish weighing procedures on March 7th. Before then you could utilise an SFPA approved pier-side weighing system. However, under the new regime, the options presented to the Master to ‘control weigh’ this landing of whiting were limited.  This resulted in an outcome which rendered the fish unsuitable for food products.”

Mr Byrne says the new options for control weighing are “impractical and have no reasonable regard to the food grade processing requirements of this valuable Irish resource. The option offered of dewatering and weighing the fish in bulk tankers was not a practical or viable solution for the MFV Lauren.”

“This was a premium product that was earmarked for human consumption. There have been similar experiences with numerous other landings in the past few weeks. It’s all due to an over-interpretation, on Ireland’s part, of common EU regulations. This has left the industry at a massive competitive and financial disadvantage compared to other EU coastal states.”

“There is a complete paradox here. The SFPA is the national control agency for seafood quality. However, they are effectively abdicating this responsibility by introducing weighing procedures which result in serious damage to the quality of Blue Whiting. The options presented to fishing operators are not fit for purpose. Yet, the operators are held responsible and left to figure out how to do the impossible!”

Aodh O Donnell of the IFPO says Irish seafood exporters have already lost vital and profitable sales from the interrupted and uncertain landing scenario prevailing since March 7th. “There are also wider socio-economic losses for the region, such as loss of earnings for part-time fish processing workers who missed badly needed employment opportunities. This latest incident with the MFV Lauren led to the loss of two days weekend overtime work for 51 employees who had to be sent home.”

“The processing plants are a significant source of employment. They are the backbone of the economy for our coastal communities, who are frustrated and angry at how matters have unfolded since March. To secure supply and to compete internationally, we just need a common-sense approach and a level playing field in applying EU regulations.”

Both the IFPEA and the IFPO are extremely concerned that the latest actions of the SFPA are based on an entrenched position.  In Killybegs, there is a particular concern about threats to suspend factory weighing permits from some fish processing companies affected by the new system.

Regrettably, the blue whiting season is now ending, and the losses suffered by the industry and local coastal communities cannot be undone, says Aodh O Donnell. “The SFPA are aware that weighing permits legitimately granted to all factories are due to expire on the 30th of April. It is now feared that the SFPA might even proceed to revoke these factory weigh permits before they expire in a few days’ time.”

The industry representatives say they are clear on what is needed. “We acknowledge that the SFPA must operate independently but we still need to work together to achieve clear accountability in the national interest.”

“We have a modern pelagic fleet, and processing plants have invested in state-of-the-art weighing systems. These systems include live feed camera monitoring of in-house weighing, supported by 31-day back-ups. No other EU member state has implemented the level of control the SFPA is currently exercising. The Irish industry has a commitment to sustainability and fit-for-purpose control …. but we need a level playing field. Otherwise, the industry will shrink, and decay and our competitors will benefit exponentially from fish caught in our waters.”

“We call on our Minister and the Government to play a vital leadership role in urgently resolving this matter and implementing the High Court ruling.”