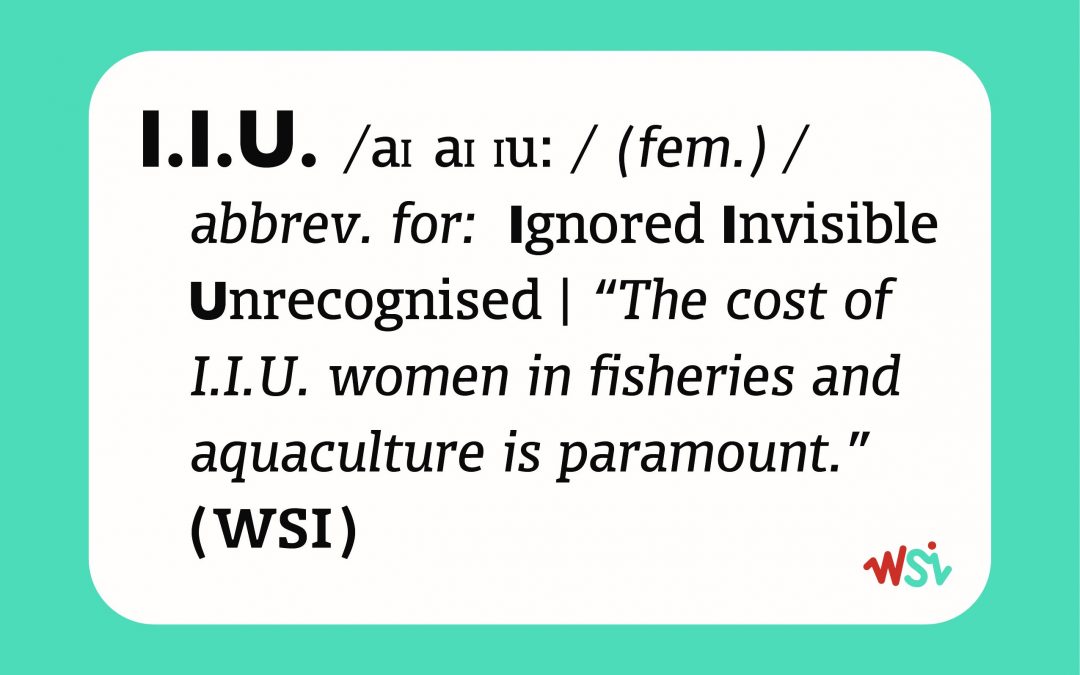 For decades the fishing community has deployed tremendous energy to alert and fight against Illegal, Unreported and Unregulated fishing (IUU) – an issue which costs between 10 to 20 billion dollars and is constantly present in fisheries discussions, conferences and articles. However, there is another phenomenon with equally disastrous consequences, reaching the proportions of a scourge: IIU, the Ignored, Invisible and Unrecognised women in the seafood industry.

Despite its great social, environmental and economic cost, IIU has received very little attention. This International Women’s Day (March 8), the International Association for Women in the Seafood Industry (WSI) are inviting the seafood community, stakeholders and leaders to appropriate IIU with the same strength, concern, and budget resources that have been given to IUU.

The social, environmental and economic impacts of illegal and related fisheries are abysmal, they say. In order to work against it, over the past decade, international communities have deployed massive energy and funds. Indeed, the issue has been embraced as so important, decisive and widespread that no one has any doubt about what the acronym IUU means.

IIU, on the other hand, though equally serious, has so far remained largely in the shadows. According to WSI, this is something that must be addressed, not only to avoid economic losses but also to achieve sustainable development in the sector, especially if we consider that women represent half of the seafood worldwide workers.

In this regard, WSI makes the following declaration:

The cost of IIU

The Ignored, Invisible, and Unrecognised women in fisheries, as the words imply, have been hidden as though their work is confined only to the private domain of society, beyond the attention of decision-makers. For decades, numerous social scientists have revealed evidence of the diverse and numerous areas of direct and collateral damage created by ignoring and discriminating against women in fisheries.

Women’s participation in the seafood sector is largely invisible, overlooked as if the viewer has a blind spot as far as women and their work is concerned, or hidden behind factory walls. As an example, the fishing effort of women is not taken into account in fisheries management because they’ve been historically left out of accounting – despite numerous studies showing they are working in mainstream fisheries or fishing, albeit in different ecosystems from those typically used by men.

Not counting women in fishing statistics renders the diagnoses upon which resource management rules are based incorrect. Yes, a little effort is being made to remedy the very poor state of sex-disaggregated statistics in the production stage, but this is one of the great challenges in the sector, and one which needs much greater resources.

Public policies and natural resource management tools are constructed in the absence of such data and ignore also the level of women’s unpaid contributions. To add insult to injury, the lack of sex-disaggregated data is used as a pretext for not taking corrective actions. Because women’s contributions are comfortably invisible, decision-makers can comfortably consider this a non-issue.

Ignorance is not irremediable curse

Ignoring women’s knowledge and their contributions can result in inadvertently disadvantaging them when policy and management decisions are made. Who gets a licence, assistance, and access to opportunities?

In private or public decision-making, having women working in this space whose expertise and information are not taken into consideration can mean poor outcomes. For instance, in the context of climate change, the adaptation challenge urgently requires proper diagnosis and involvement of all players, including those so-far ignored women.

Ignorance of women, their knowledge and contributions is hard to crack but, normally, those in the sector are quick to learn, such as with tackling IUU, implementing new certification schemes and quality control procedures. WSI sees opportunities to educate the sector’s decision-makers about the costs of IIU and to stimulate gender inclusion, or even a restructuring of priorities.

The production of concrete and solid information on the subject is ongoing, yet needs to be strengthened and accelerated. This valuable knowledge needs to be shared, sought out and used to illuminate public debates and private business practices.

Women are half of this industry: they need equal recognition

The unpaid or underpaid work of women allows fishing activities by men, often on behalf of their households, to continue even when the activity is not profitable (e.g. mending nets, net making, administration, selling). The value of women’s labour should be considered as a hidden subsidy.

As they often do work considered as ‘help’, women do not have the recognition needed for receiving a salary for the work done. Research has shown that on many occasions, wages become a source of bargaining power at the time of decision-making both in the private sphere and in the workplace. By being recognised through a salary, women gain in prestige, and are better recognised and valued by their communities.

By unrecognised we mean women’s positions and roles along the entire seafood value chain, and also the issues that affect them, in particular, are not appreciated. Not only are their economic contributions little recognised, but so too are the unequal and unfavourable working conditions women can face in fisheries and aquaculture.

Stereotypes and social norms, and often laws, prevent women from accessing some jobs. For example, fisherwomen are not recognised as professionals in many countries and cannot become members of professional organisations. On the other hand, while high profile women suffer discrimination in terms of access to boards or CEO positions, women in the labour-intensive seafood processing industry commonly suffer abusive treatment, violence, sexual harassment, poor and unsafe working conditions.

On account of this, WSI is calling upon international organisations and national institutions, professional associations, trade unions, and private corporations to end IIU and address gender equality in a constructive way. All of these institutions can encourage and facilitate the organisation of gender equality dialogue and action in the seafood industry, they say.

Last November (2019), a key message from the FAO International Symposium on Sustainable Fisheries was that women must be made visible, included and their knowledge and value recognized. FAO and its member countries can seize on this outcome at its forthcoming Committee on Fisheries and Aquaculture 2020 Meeting and, for the first time ever, put gender equality on its agenda.