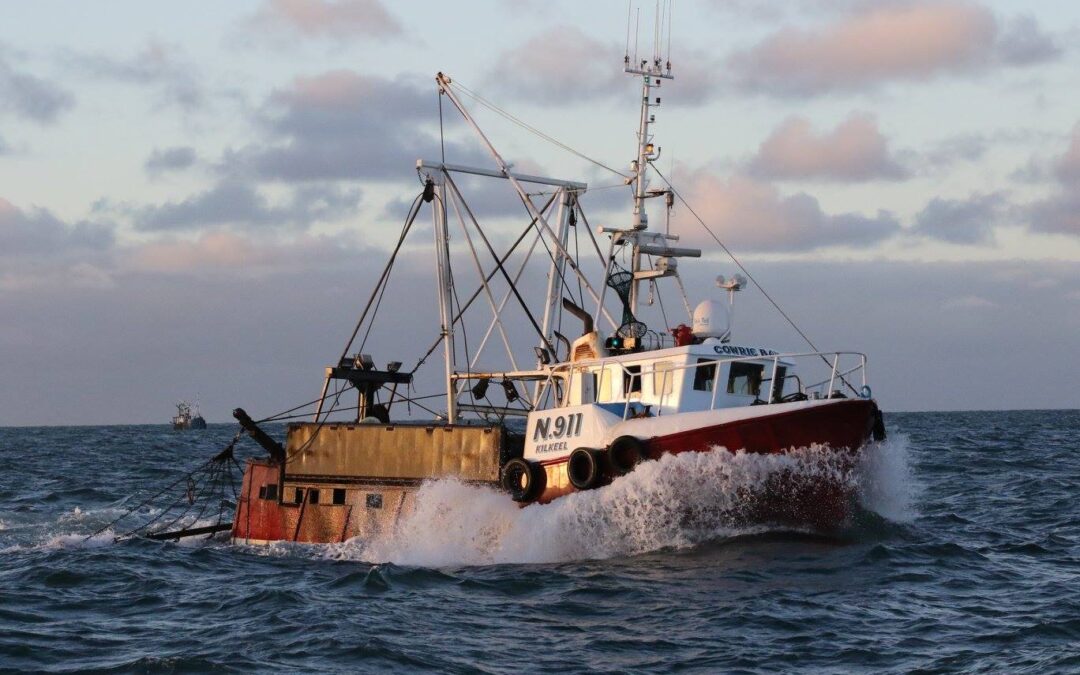 One of the most common questions asked to i-Fish Marine Electronics, based in Kilkeel Northern Ireland from scalloper skippers was how they could monitor, in real-time, the angle of pitch of their scallop dredges. Having this information at hand would allow the skipper to adjust the amount of wire quickly during fishing operations, to set the dredges at the most effective towing angle. To the casual observer, it would be assumed that when fishing for scallops, the wheels on the end of the dredge bar rolled along the seabed when towed, and this in turn dictated the angle of the dredge teeth in relation to the seabed.

However, scallop dredge skippers will tell you that the normal practice is to shoot more or less wire warp as the best method to change the towing angle of the dredges. Having the correct towing angle can significantly improve the scallop yield per tow and therefore is a crucial piece of information to know.

As the Simrad Dealer for Northern Ireland, i-Fish owner Stephen Jones, contacted Andrew Masson, UK Commercial Fishery Sales Manager of the Simrad UK distributor, Echomaster Marine Ltd. for advice. Echomaster Marine have over three decades of experience with wireless trawl monitoring systems however, using such a system of a scallop vessel would be a first for them too. 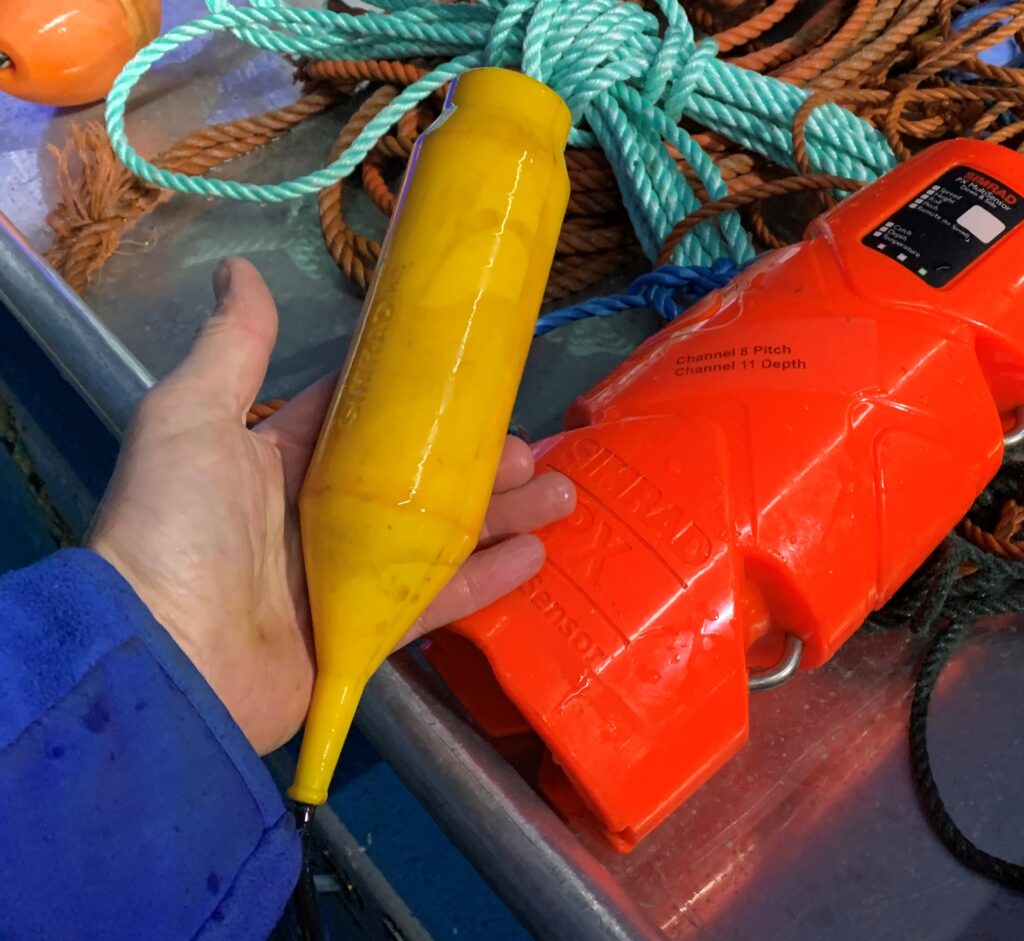 Due to the heavy nature of scallop fishing gear, and the continuous shooting, hauling, tipping operations a solution would require an extremely robust sensor. Another concern was the system would require exceptional signal handling in order to overcome the localised low frequency noise generated by the scallop dredge teeth striking the often-stony ground. Echomaster Marine suggested a trial be organised utilising the tried and tested Simrad PX Multisensor, coupled with the Simrad TV80 gear monitoring software. The signal from the sensor would be picked up by a portable hydrophone for the trial, although this would be a hull mounted hydrophone in a permanent installation.

Stephen Jones talked to Mark McKee, skipper of the Cowrie Bay, who kindly agreed to trial the system while the vessel was working, day fishing off Kilkeel, at the end of the season. The ground off Kilkeel is very rough and the trial was based on the presumption that if it works on very rough ground, where there will be maximum noise and vibration, then it should work anywhere. i-Fish engaged local fabricators Samuel & Raymond Patterson and discussed how the sensor housing was mounted.

The mounting solution had several requirements. For example, the sensor must not interfere with the balance of the towing bar. Also, there was the possibility of damaging the sensor on the seabed if it ended up being towed up upside-down. Ultimately it was agreed that mounting the sensor on the towing triangle would avoid these issues and provide the vital information back to the wheelhouse. At this location there was a suitable area to weld the Simrad PX sensor housing while also considerably reducing the risk to the sensor itself during normal fishing operations. Crucially it would not interfere with the emptying of the scallop dredges.

Leaving Kilkeel Harbour at 8am, the Cowrie Bay made the short journey to the fishing grounds. Tows lasted for approximately 50 minutes, and it took around 10 minutes to haul and shoot. This timeline allowed for 11 tows throughout the allowed fishing day. The Simrad PX sensor on the towing triangle quickly reported the pitch angle being towed which was displayed on the Simrad TV80 software in the wheelhouse. The towing angle pitch quickly changed from 15 degrees to 22 degrees depending on the length of wire used. The pitch and roll angles were plotted over the whole tow to let the skipper see how much it varied when turning. It was noted that the reported angles from the PX sensor were consistent throughout the tows. 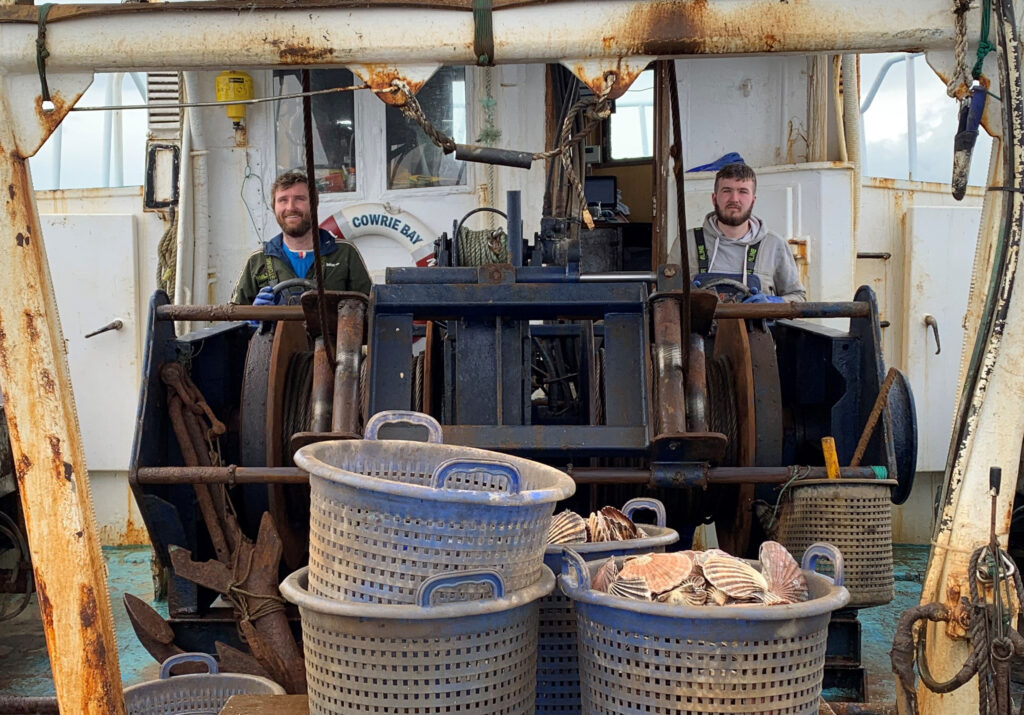 Continuous reporting of the roll angle of the dredge allowed the Skipper to know within seconds if the dredge bar had ended up on the seabed upside down when it was being shot away. This prevents one side of the vessel’s scallop dredges being completely unproductive for a tow and incurring damage by being towed upside down over rough or stony ground. Having this information early means the gear does not require to be repaired saving on cost & time.

Under normal conditions the roll measurement would be within a few degrees of zero, but if upside down it would read on the TV80 software around 180 degrees.

Mr McKee concluded that it wouldn’t take long when fishing the same patch of ground to make note of the angles against different wire shot, and what catch was obtained for each tow to then determine what is the best angle in that area. Unlike the trawlers spread, the scallopers angle is very easily adjusted, and a few fathoms of wire in or out could make quite a difference. Once the skipper is happy with the desired angle to work in a certain area it would be this pitch range to be used no matter the state of tide and wind.

The conclusion is that the use of a Simrad Multisensor system onboard scallopers is very helpful in setting the gear quickly at the preferred angle of attack for each tow and knowing that the gear is on the ground the right way up, and therefore can enable the skipper to increase the catch and lower running costs. The standard system setup suits most scallop fishing vessel sizes. 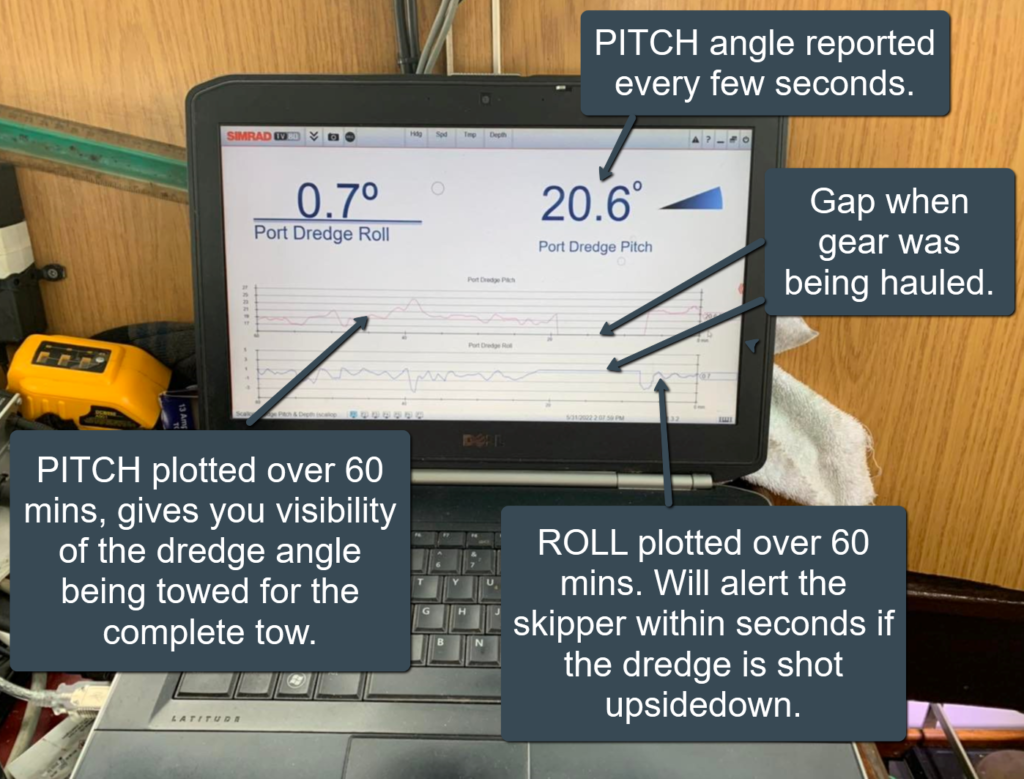 Generally, grant aid is available for these type of systems in the UK & Ireland.