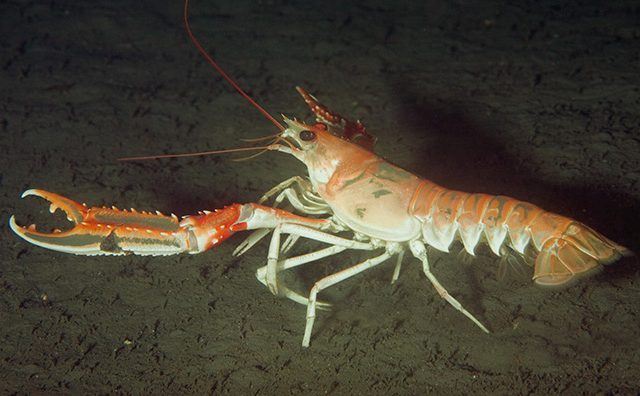 Nephrops are an orange-pink lobster, commonly known as the Dublin Bay Prawns, and are one of the most valuable shellfish landings in Europe. Scientists at the Marine Institute assess Nephrops populations by carrying out Underwater TV Surveys – a unique surveying technique that has been in use for almost 20 years.

Once settled on the seabed after a juvenile stage where they drift around, adult Nephrops spend a great deal of time in their burrows in muddy sediments, and over their life span, rarely move more than a few hundred metres from where they settled. These underwater TV surveys track Nephrops burrows in these habitats to estimate the Nephrops population.

An underwater camera is mounted on to a purpose-built sledge, which has lights, navigation sensors, lasers and CTD (Conductivity, temperature, depth) units. The sledge is towed behind a marine research vessel, very slowly at about 0.8 knots to allow detailed examination of the seabed. The camera collects high-quality images and data of the seabed.

Scientists review the images and identify and count the Nephrops burrows, and also record other species seen on the seabed such as starfish and crabs. Sampling data is also collected from fishing vessels, such as the sex ratios, weight, mean lengths and other biological details, which inform the size structure of the Nephrops population.

Scientists use the data collected from the Underwater TV surveys to accurately estimate the number of Nephrops burrows. Additional data from samples collected by fishing vessels, is used to calculate the average weights of the Nephrops. These data sets are combined to calculate the size of the stock and what can be sustainably harvested (i.e the total allowable catch for the year).

The Marine Institute has been developing Underwater TV survey methods and technology since 2002. Our scientists have shared their expertise with scientists in the UK and Scotland and have also been involved in the International Council of the Seas (ICES) working groups to establish “best practice” for underwater TV surveys.

The Marine Institute has also collaborated with the French Marine Institute (Ifremer) to transfer our technology and knowledge on the Underwater TV survey methodology to the Nephrops resources in the Bay of Biscay.

Nephrops are a vital resource for the Irish fishing industry and the Underwater TV survey programme is a key to assessing this resource, worth over €40m per year to the Irish coastal economy. The Underwater TV surveys undertaken by the Marine Institute helps ensure assure the consumers of Ireland and Europe, that Nephrops – a valuable food from our ocean – are harvested sustainably.

The Marine Institute’s Oceans of Learning series this week focuses on ‘Food From Our Ocean’. Oceans of Learning offers videos, interactive activities and downloadable resources on assessing fish stocks, aquaculture, phytoplankton and the work undertaken at the Marine Institute’s Newport Research Facility. To view the resources visit Food from our Ocean.