The latest new vessel from the  Parkol Yard in  Whitby is the 23 metre MFV Green Isle SO 500 for Michael Cavanagh from  Green Castle, Co Donegal. 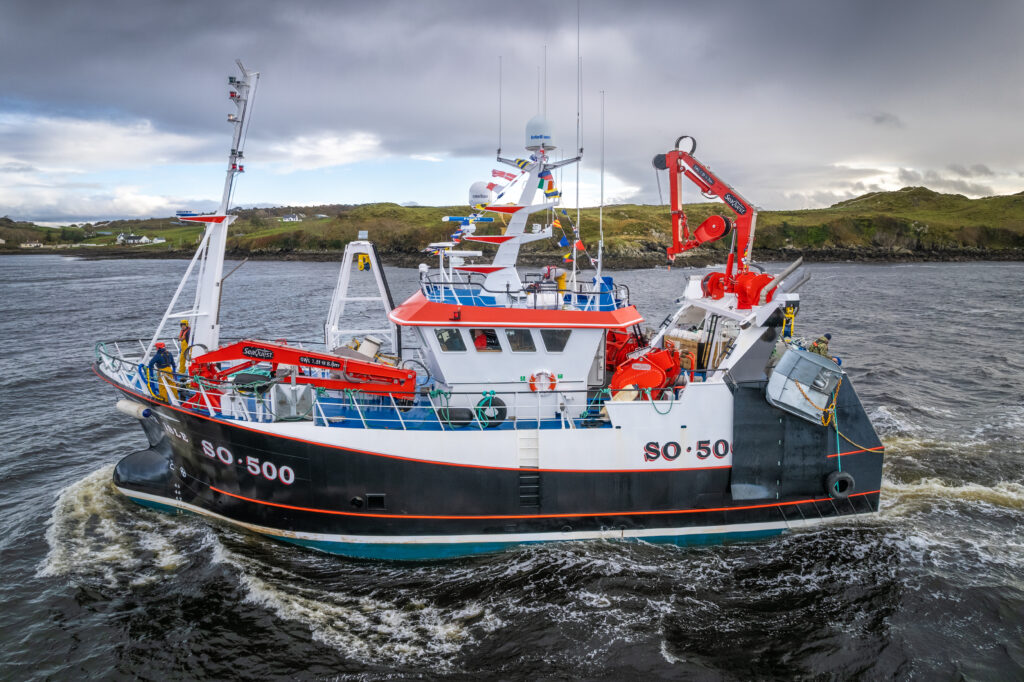 The latest new vessel from the  Parkol Yard in  Whitby is the 23 metre MFV Green Isle SO 500 for Michael Cavanagh from  Green Castle, Co Donegal.

The Green Isle is a replacement for Michaels previous vessel also named Green Isle, formerly the Green Isle that was bought as a 21 metre vessel from Noel and Tony Kenning of Mallaig in 2003. Two years later he had her lengthened by 2.7metres at MMS Ship Building in Hull .

The new Green Isle has been built by Parkol Marine Engineering from Whitby to a design by S C McAllister Ltd.  The vessel was launched at Parkols Teesside yard on 5th September and named by Michael Cavanagh’s wife Mary. Then taken to their Whitby yard for final fitting out. The boat was certified to Bureau Veritas classification and Marine Survey Office standards and is insured by British Marine Insurance.

The vessel has been designed to be able to switch between pelagic trawling and demersal trawling.  Depending on availability of quotas and market demand, Michael intends to work pelagic pair trawl for mackerel, herring and scad through Autumn into the winter month,  May to June time he will rig the demersal twin rig trawls and concentrate on prawns and whitefish in the Celtic Sea and grounds to NW of Ireland. In the summer months he will be pelagic trawling for tuna off the SW of Ireland a fishery he has targeted for over ten years with his previous command.

Green Isle has an overall length of 22.7 metres with a registered length of 21.8metres, a breadth of 7.5 metres and a draft of 5.07metres. The vessel is powered by a 480 kw Mitsubishi S6R2-T2MPTAQ3M supplied by Padmos who have departments in both Holland and Ireland.

The gearbox is a Reintjes, Type WAF 573L/7.474:1 driving  a 2.5 metre 4 bladed propeller from Promarin fitted inside nozzle by Kort propulsion. The propeller shaft is supplied by Premier Engineering of Scarborough who supplied the rudder as well.  Also supplied by Padmos are two auxiliary engines a Mitsubishi S6B3-T2MPTAW-20, mounted in the engine room on top the port fuel tank and a smaller Mitsubishi S4S-DT that is mounted forward under the shelter deck. On the starboard fuel tank is a Cummins gen set supplied by Beta Marine. 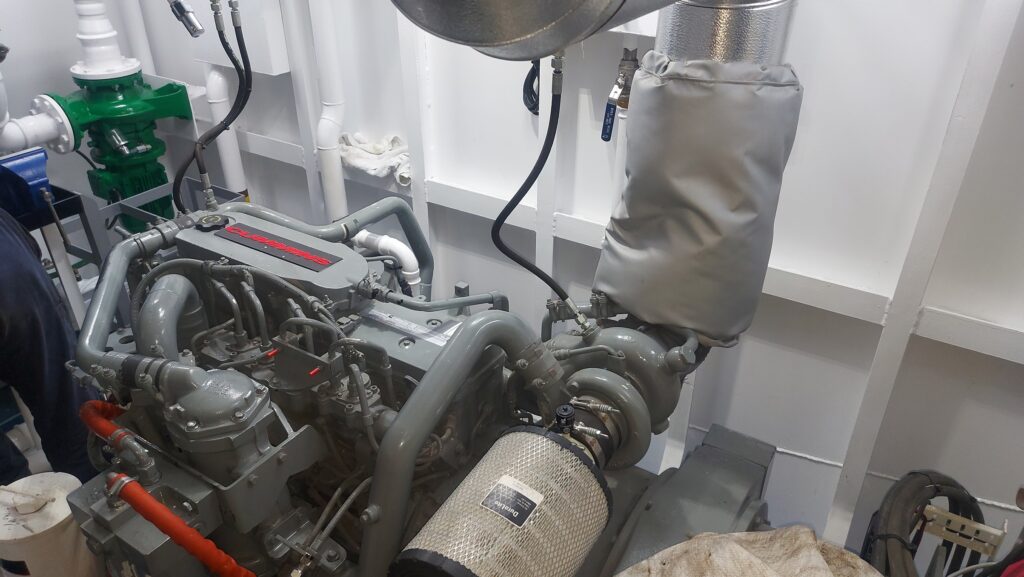 The hull of Green Isle is of round bilge construction with transom stern, bilge keels and bulbous bow built of steel with an aluminium wheelhouse situated midships on top the shelterdeck.  From forward aft below decks are the forepeak housing a fresh water tank inside the bulbous bow, A small ‘technical’ tank holding 10 ton of freshwater, then a dual level plant / sonar room that is accessed by a hatch in the deck. This houses the electrical switch boards for the ice machine as well as refrigeration unit, pumps and distribution valves for the RSW tanks that were supplied by the KER Group.

Below floor level in this compartment there is the transverse steel tube housing the KT 250L Hydraulic bow thruster from Kort Propulsion and the two sonars, giving easy access to them all for any routine maintenance that may be required.

Moving aft there are three RSW tanks with a combined capacity of 110 cubic metres, holding around 80 -90 tons of pelagic fish.. These can be converted to a traditional chilled fish room by removing wall plates between the tanks for when the vessel is twin rig trawling for nephrops. Once the steel plates between the tanks are removed the fishroom has a capacity in the region of 750 boxes.  Beneath the floor of the RSW tanks and fishroom is a large fuel 12,000 litre tank. 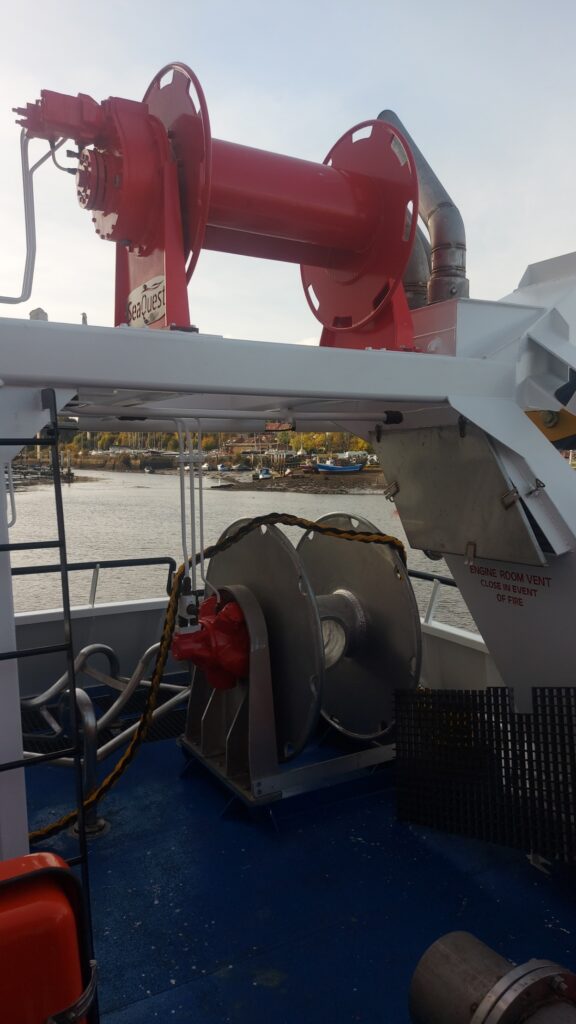 Further aft at this level is the engine room with the 480kw Mitsubishi set deep in the centre and the two auxiliaries fitted on top of the fuel tanks on either side. The S6B3 Mitsubishi on the port side drives three hydraulic pumps for the main hydraulics and a large alternator for

electrical power.  The smaller 150KW Cummins QSB7-DM genset on the port side provides additional  electrical power. The exhausts for all three engines are channelled aft and up the port leg of the stern gantry.  Alternative hydraulic power for net retrieve etc is provided by an electrically driven hydraulic pump. The Wills Ridley steering gear pump, aft on the starboard side in the engine room is also driven by an electric motor. There are Two electric Ascue bilge pumps

Right aft is the crew accommodation made up of 2 three man cabins and 2 one man cabins, all finished in light oak panelling with solid oak edging and trims. In each cabin there is adequate hanging lockers and drawer space for all the crew. Each bunk is well served with mains electric power and USB sockets. Right aft, in between the two larger cabins there is the steering locker housing the Wills Ridley steering gear. Beside this is the easily accessible emergency escape ladder that exits on to the trawl deck aft. The accommodation is accessed by a stairway from the mess deck/ galley area. 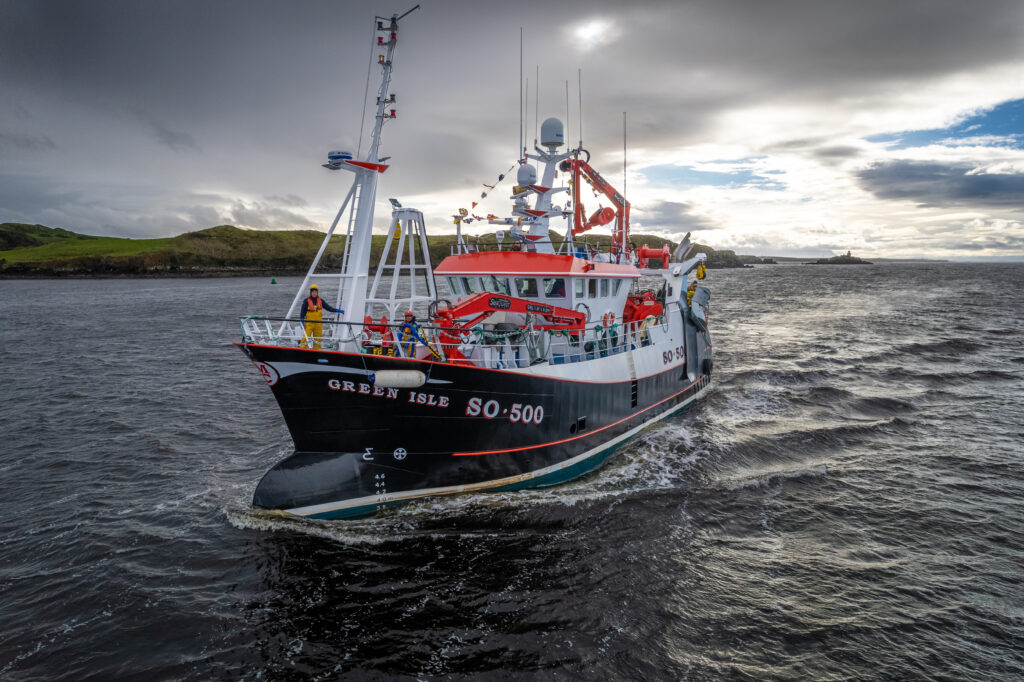 Moving up the stairway takes us into the deckhouse, on the port side is the galley and mess deck. The galley looks amazing and being fitted out with professional grade stainless steel cabinets, worktops and splashbacks. Michael had stainless steel in the galley of his previous vessel and wanted the same again as it was so easy to keep it clean.  As with the cabins the deckhouse and mess deck area are fitted out in light oak laminate wall panels with solid oak capping. The main features are a 4 plate Lincat electric cooker with an extractor fan above it, adjacent to this is a stainless steel sink and at the other side is a full height fridge and a freezer.  The large square mess deck table is finished in dark grey Corian with moulded edges, the seating is finish in black leather effect with a classy looking diamond pattern on the seat back rests. Above the table is an air conditioning unit. There is air conditioning throughout the accommodation and wheelhouse working off a central unit in the engine room.

Leaving the galley/mess deck, immediately aft is the access to the accommodation then a smart looking shower and toilet, finished in white sparkle wall panels with the shower in similar panelling but in black. Recessed into the forward bulkhead is the washing machine and tumble drier, then beyond that the stair/ ladder up to the wheelhouse, then a water tight door out onto the starboard side is the wet gear storage area with heating to dry off boots and oilskins. The compartment doubles up as the passageway from the fish processing deck forward to the trawl deck aft with aluminium watertight doors, supplied by Norwegian company Libra-Plast AS, at both ends. There are several small storage compartments within this area for chandlery and for charging the Marport sensors.

Immediately aft of the deckhouse is the large timber sheathed trawl deck with a large split net drum on either side.  Both netdrums are rated at 10.7 ton pull and supplied by Seaquest Systems of Killybegs. Along each side of the hull are cage style pounds for storage of gear and dedicated racks for stowing the steel poles for guiding the gear onto the net drums.  At the stern there are two large hatchways for hauling the trawls through, in the centre of the stern is a cage like ramp with a recess at the top for stowing the steel twin rig roller clump when hauled. 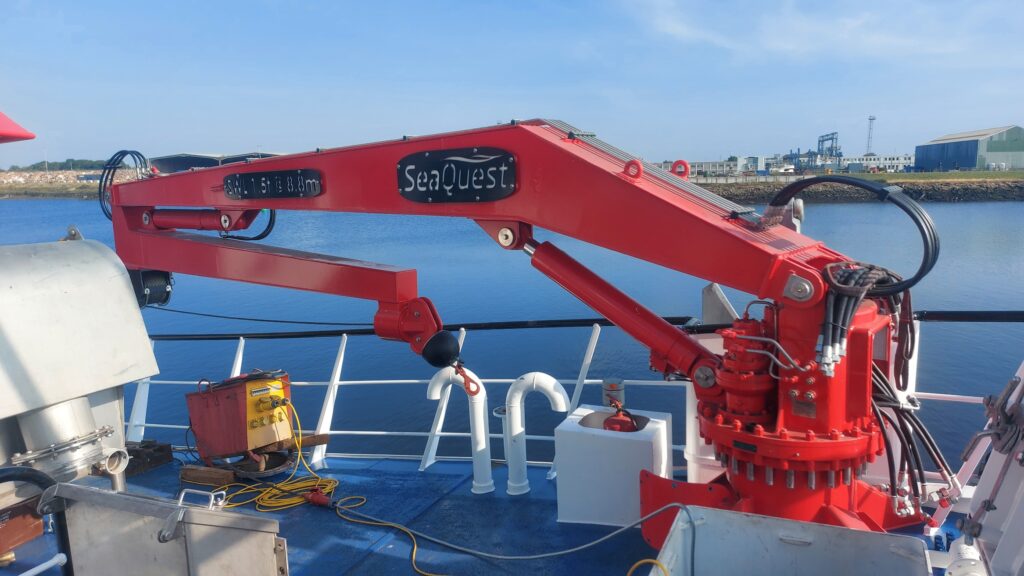 Just forward of the stern are the controls for the netdrums, with the cabin escape hatch just ahead of this. The aft deck head of this area has sections in composite gratings rather than solid steel that helps to let light in and helps with communication with crew on top of the shelterdeck. Centrally, between the two netdrums against the forward bulkhead is a ladder with a hatch for access onto the shelterdeck.

Moving forward of the deckhouse is the full on processing deck. On the starboard side is the fish reception hopper where the fish will be taken onboard when twin rigging and pair trawling for tuna. The hopper has a hinged centre section to allow the catches from the two twin rig nets to be keep separate. This gives the skipper a chance to assess if both trawls are performing to their maximum.

The catch exits the hopper aft onto conveyor that runs across the vessel with space for the crew to stand aft of this to process the catch. The catch is sorted into bins and baskets to the foreside of the conveyor where they can be moved to the fish washer and then down below to the refrigerated fish room. 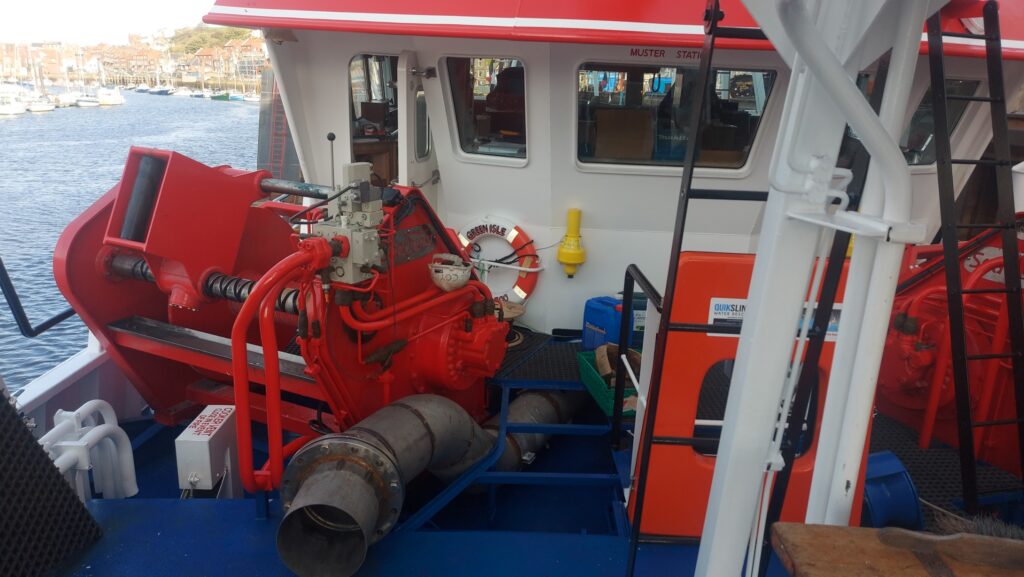 Moving across the vessel just forward of the bulkhead are the access hatches for the three RSW tanks with the Vacuum pump for landing the catches of small pelagic over at the port side. Moving forward, in the centre of the deck is the large landing hatch, then to port is the BUUS ice machine, supplied by KER Group, feeding down to a locker in the fish room, then a deck hatch to access the plant room with RSW pumps etc.

Right forward on this deck is the 18 ton Seaquest Systems middle trawl winch with the warp led up and over the shelterdeck, then under the wheelhouse to the centre hanging block aft. This winch doubles up as an anchor winch and for pelagic?? On the starboard side just aft of the winch is the Mitsubishi S4S-DT generator set that is dedicated to fire pump duties.

Above the centre winch, forward on the shelter deck is a Seaquest Systems Knuckle boom crane rated at 5 ton at 9 metres for landing fish and handling the water separator when landing the pelagic fish with the vacuum pump.

To port is the Gilson frame over the fish hopper hatch with a 10 ton Gilson winch at its base.  To port is the water separator with pipework led aft under the wheelhouse to the fish pump aft. Aft of the wheelhouse are Port and Starboard 18 ton split winches with direct leads to the Fleming Fairleads gallows hanging blocks.

Aft of the winches is a robust trawl gantry with a Seaquest Systems 5 ton at 7 metres powerblock crane on top. To starboard of the crane is a net sounder cable winch, and to port is a winch to store the hydraulic hoses for the fish pump. 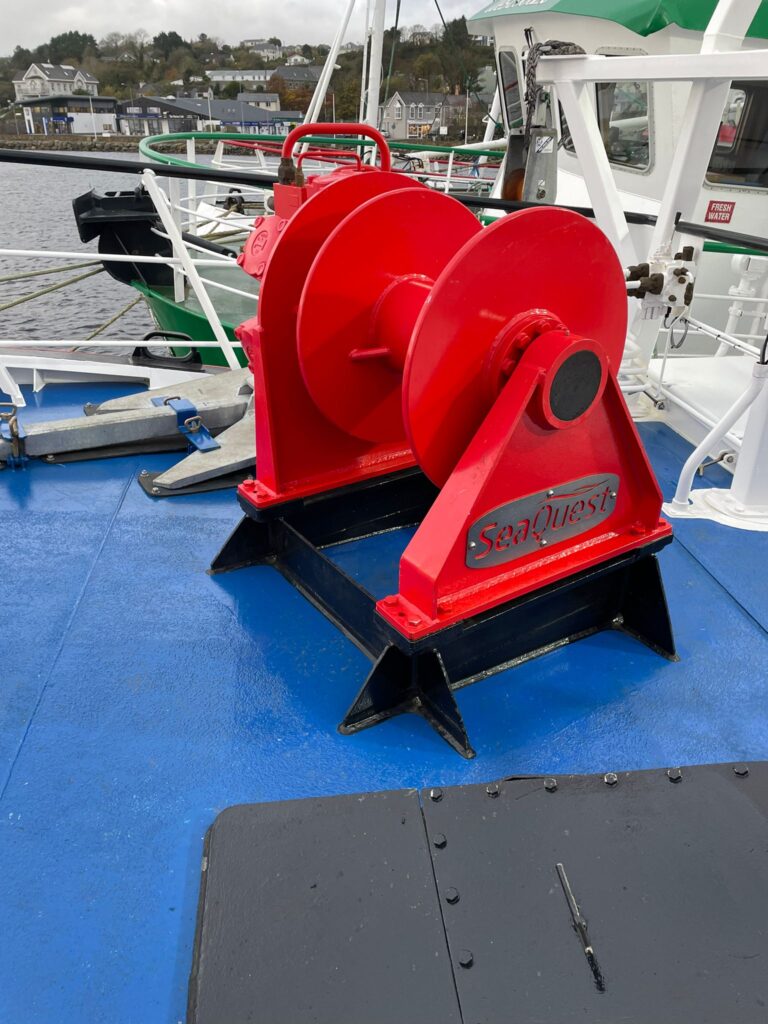 As with many modern pelagic vessel the Green Isle will pump the pelagic fish onboard from the stern. On the shelterdeck right aft, in its dedicated ‘cage,’ is the fish pump, just forward of this is the aluminium reel for storing the rubber fish pump hoses.  The fish are pumped from aft, through a stainless steel pipe under the wheelhouse to the water separator just forward of the wheelhouse and then by the way of aluminium chutes, down below to the three RSW tanks. When twin rigging much of the pelagic equipment such as the water separator, fish pump etc will be removed from the vessel and stored ashore.

Green Isle will fish with SNG Pelagic Trawls and warp

In the wheel house there is an impressive array of screens and electronics supplied by Barry Electronics. It is fitted out with medium oak panelling with solid oak trims and edging. The main centre piece are the two wheelhouse chairs with three 55inch flat screens in front of them with the ability to show almost any combination of sounders, sonars , radars etc on these screens depending whether pelagic trawling, demersal trawling or steaming to port. 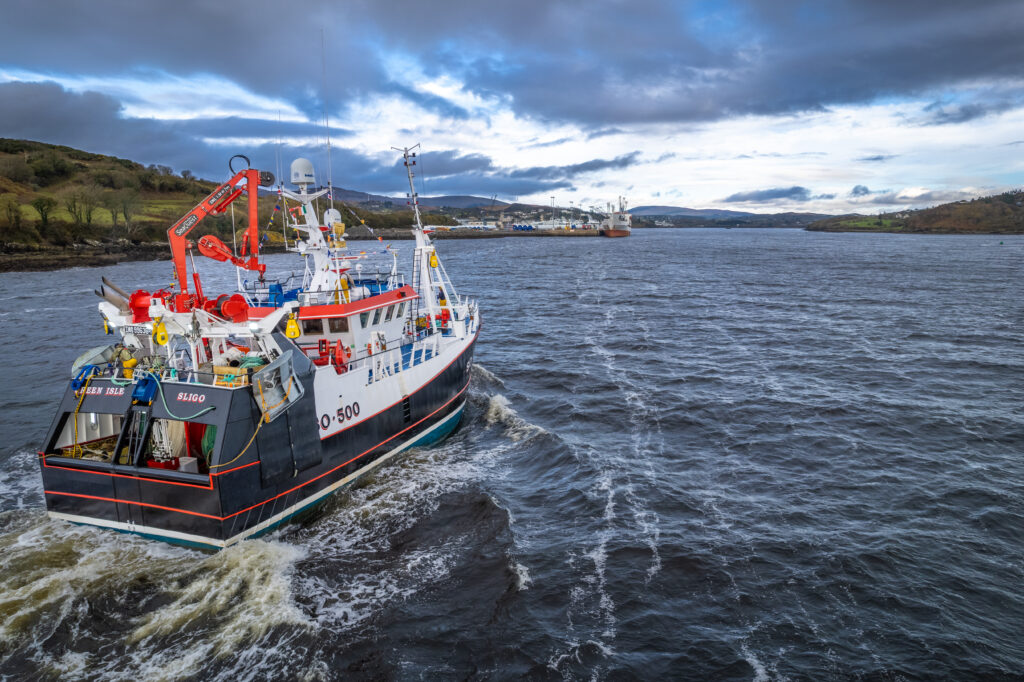 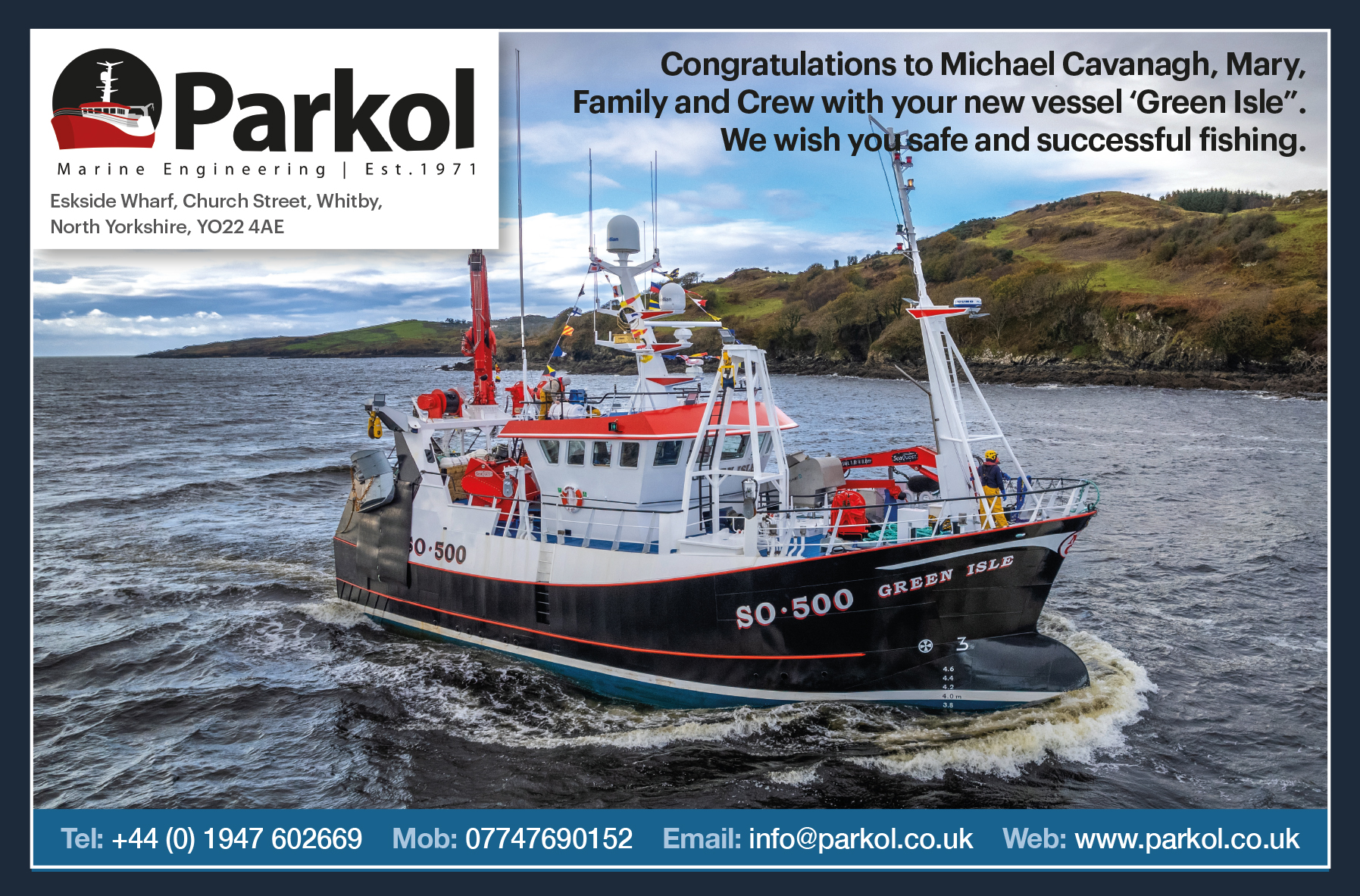 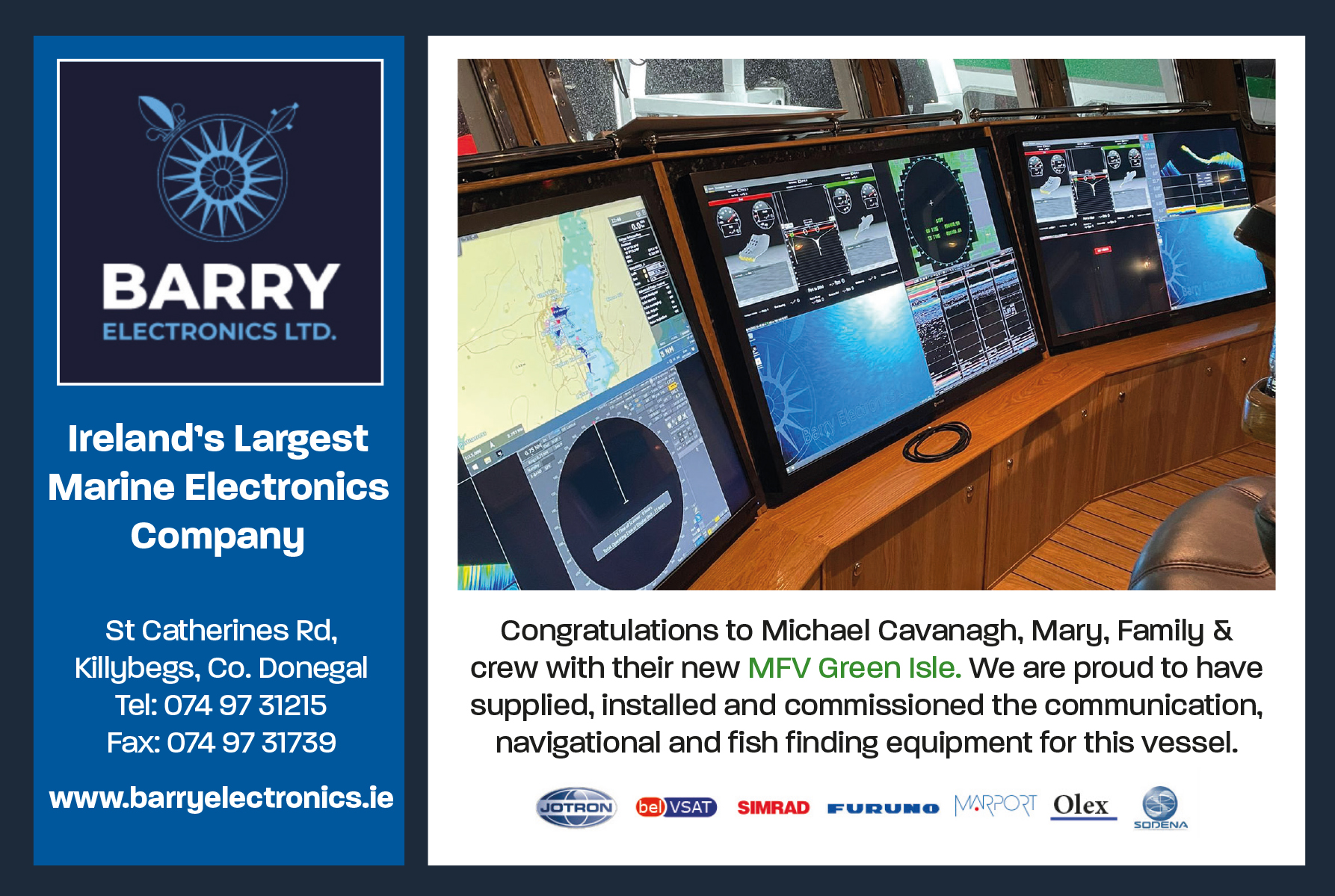 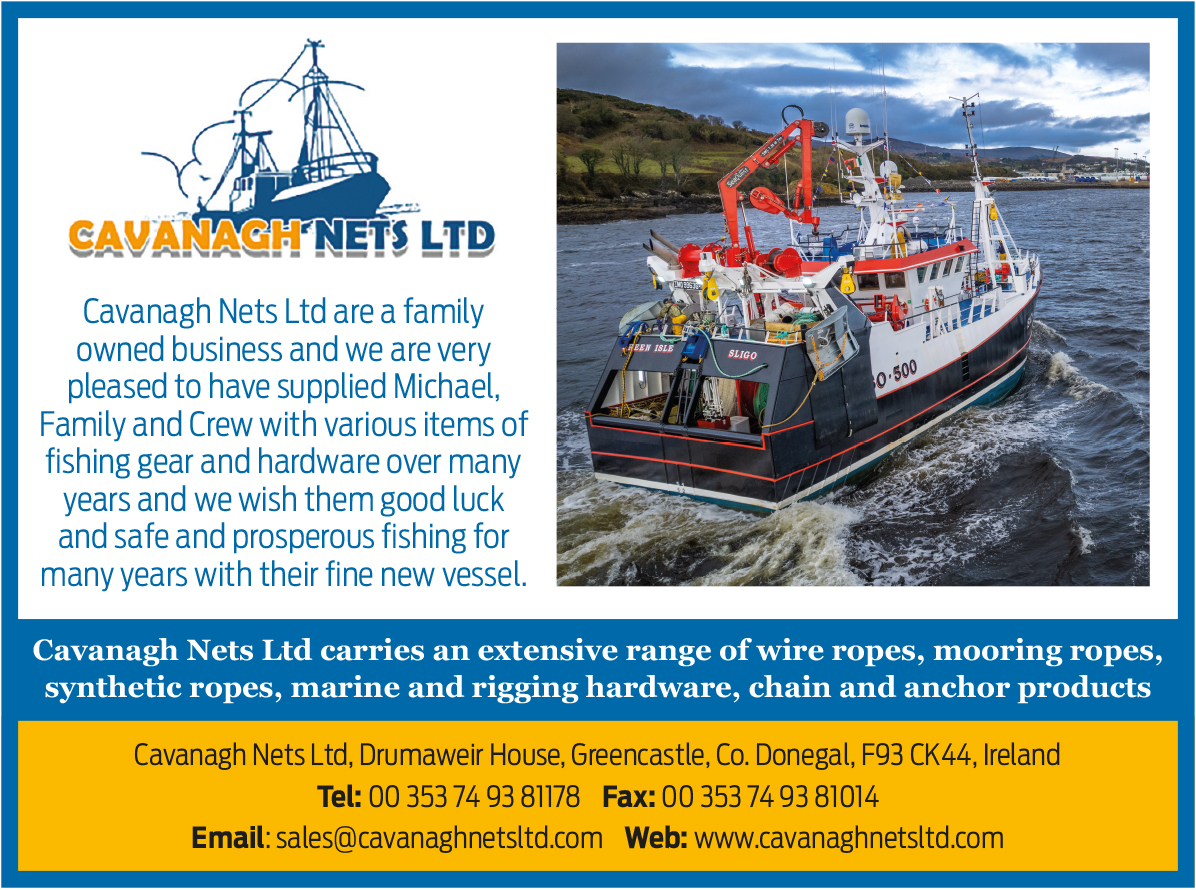 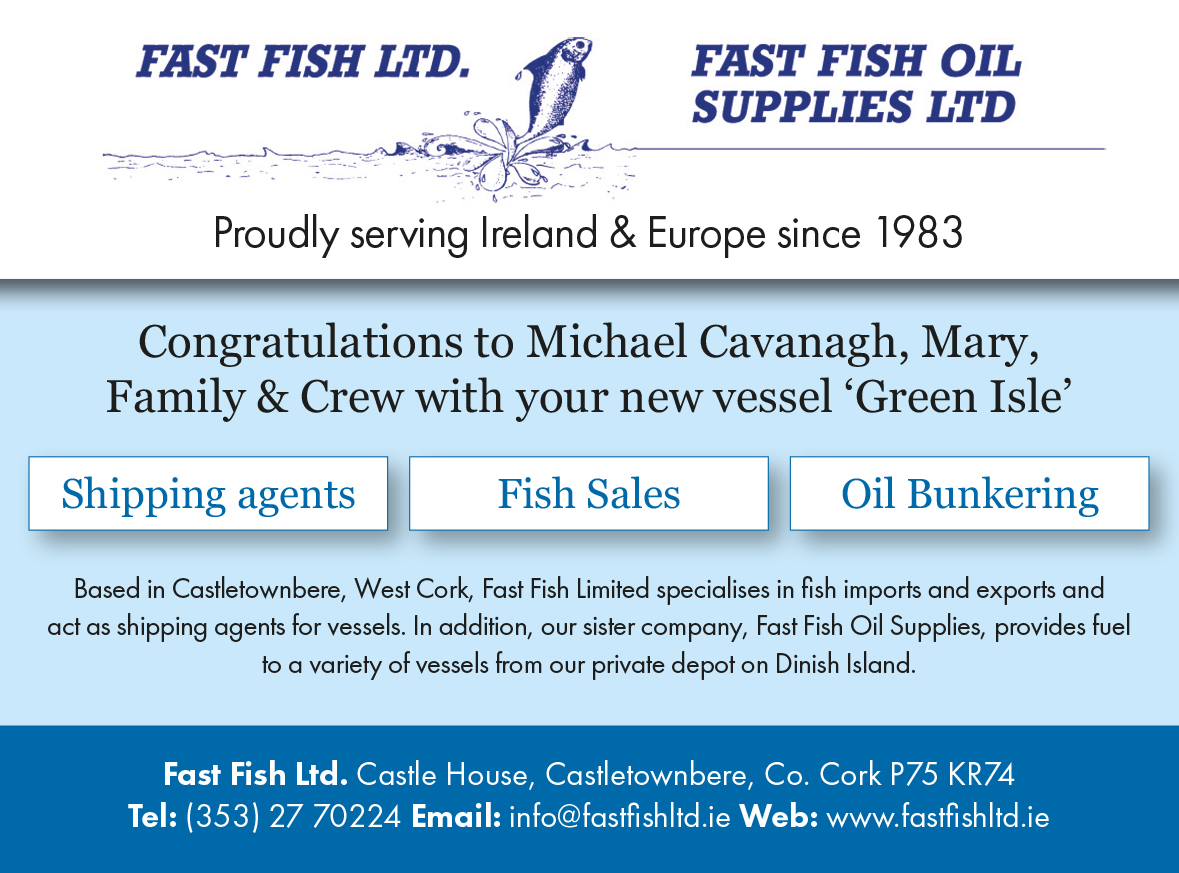 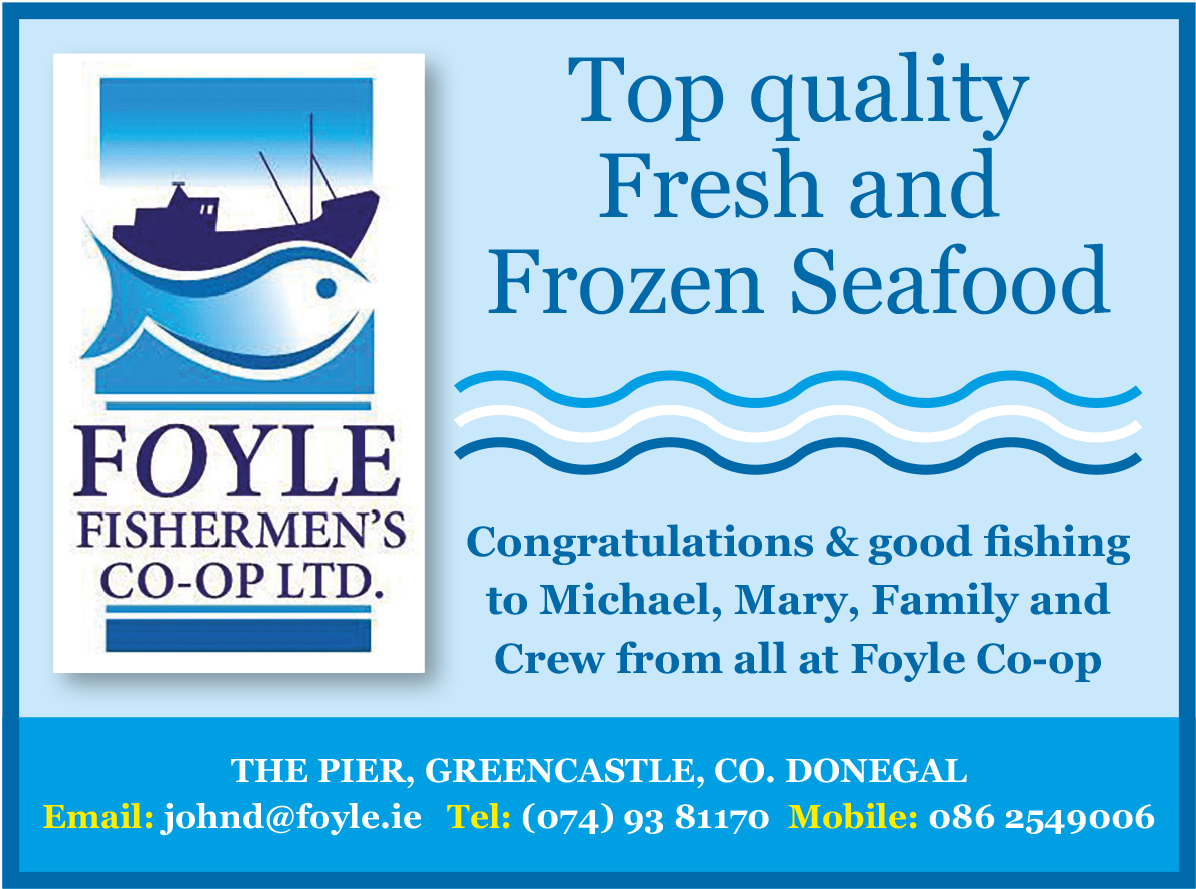 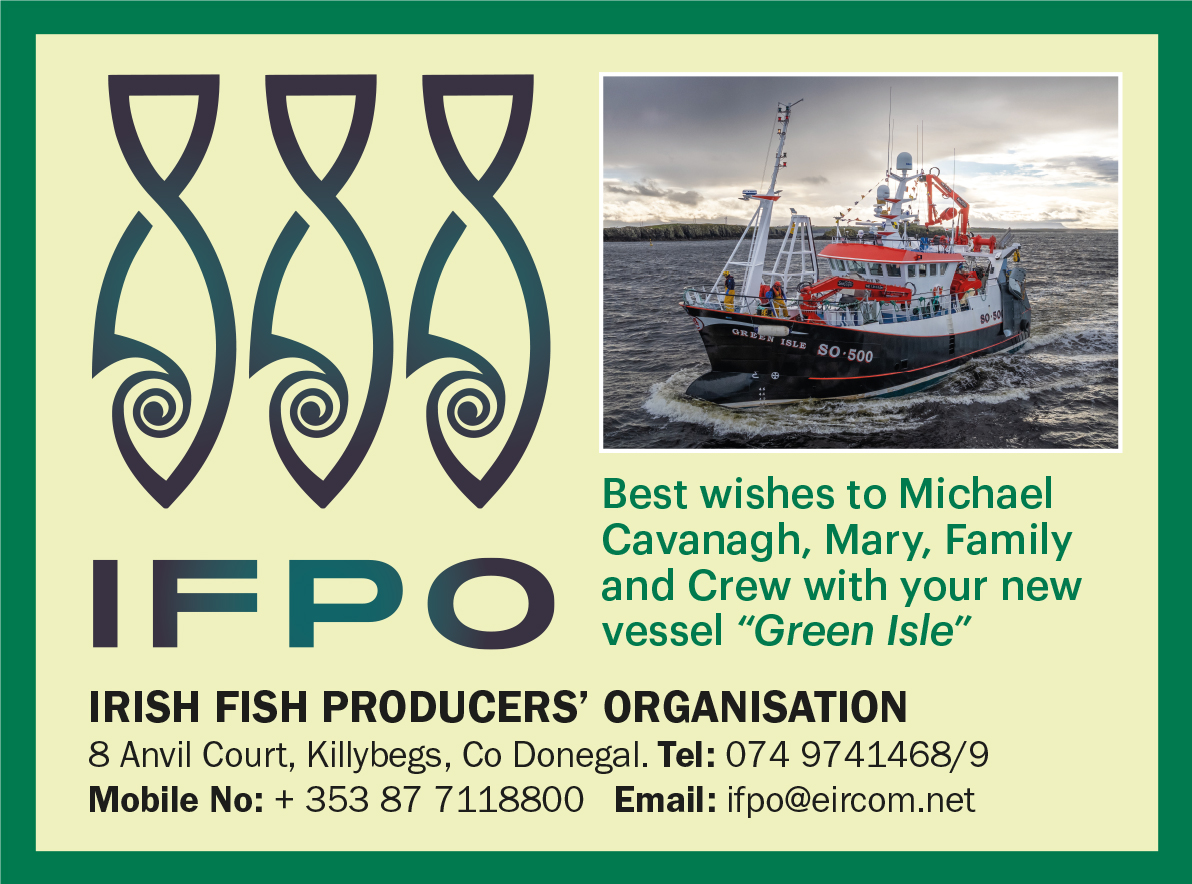 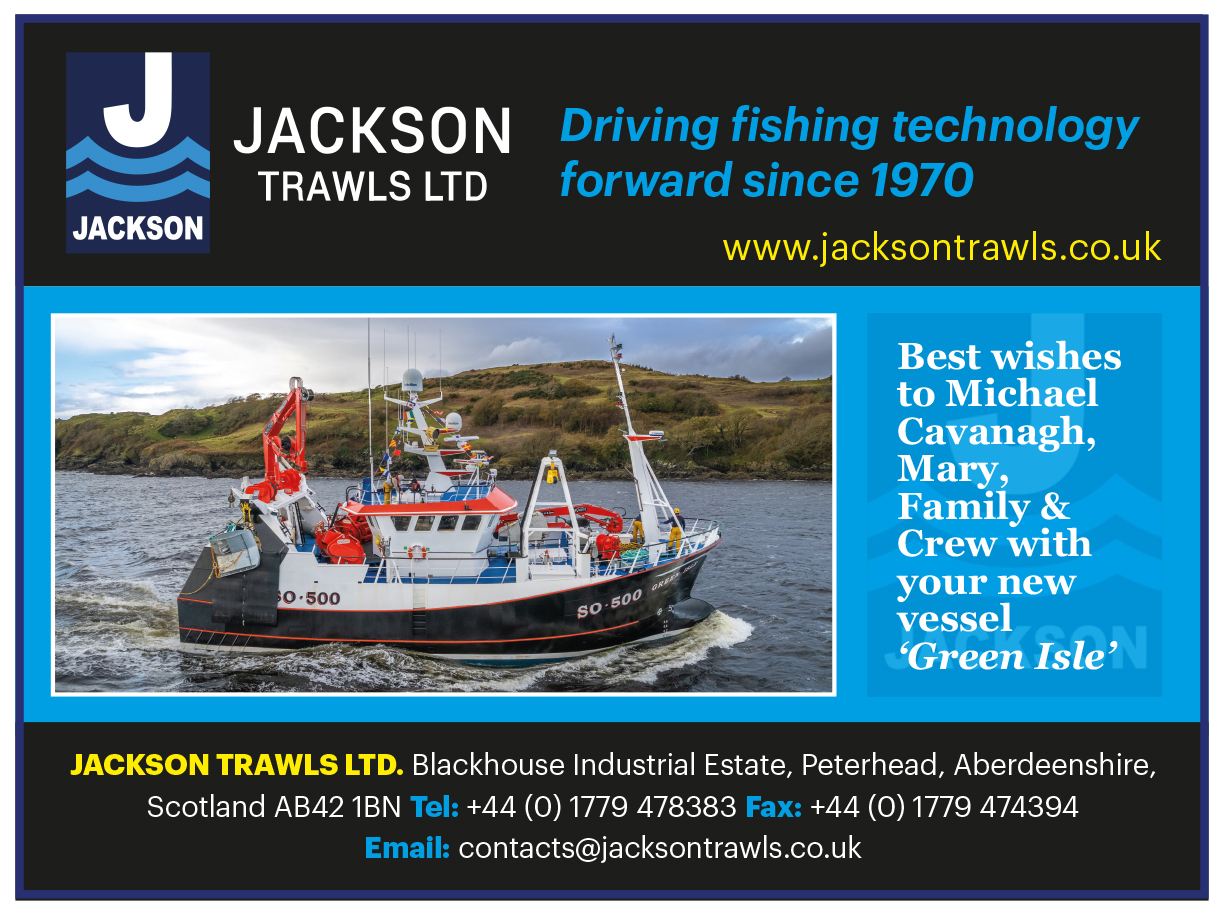 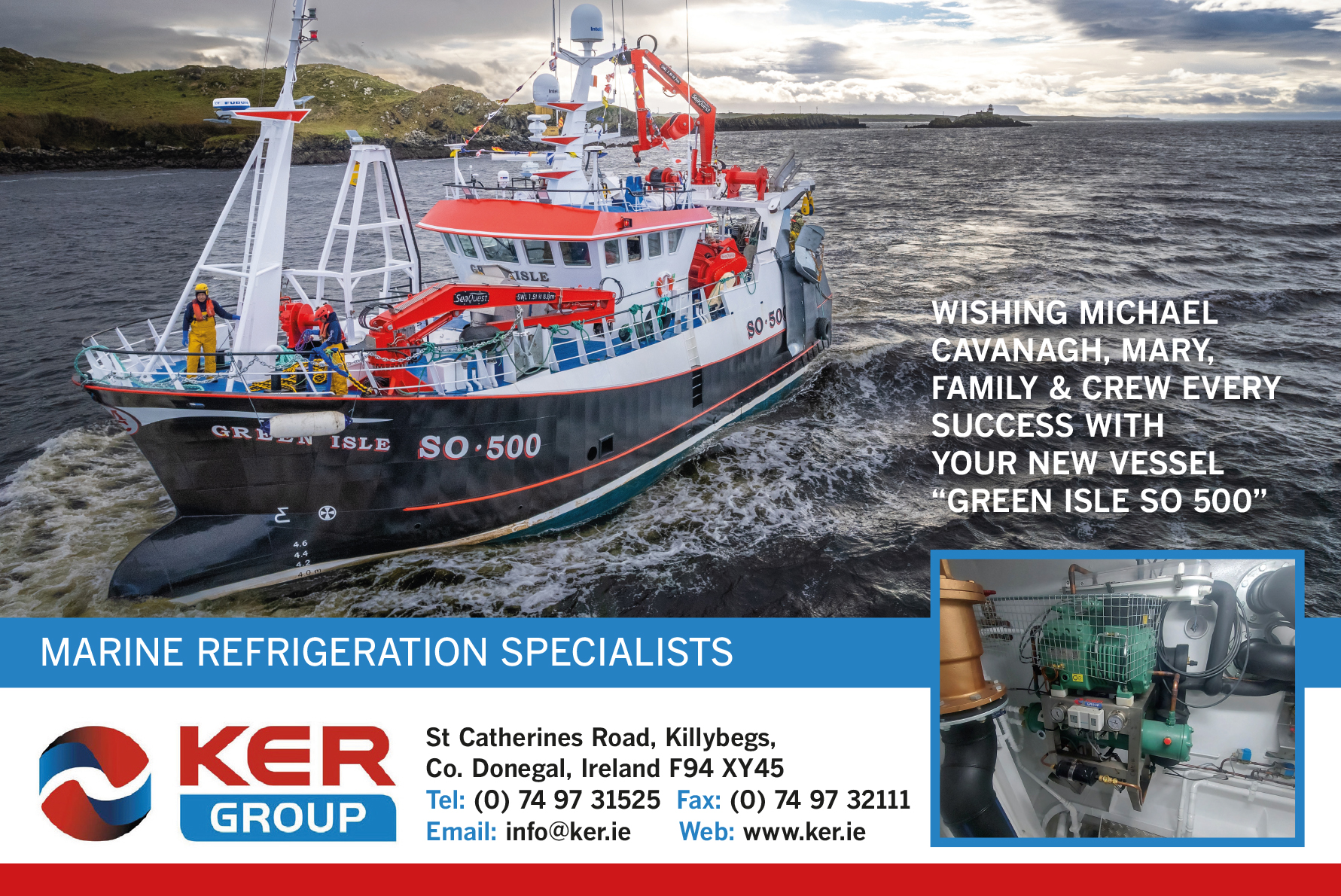 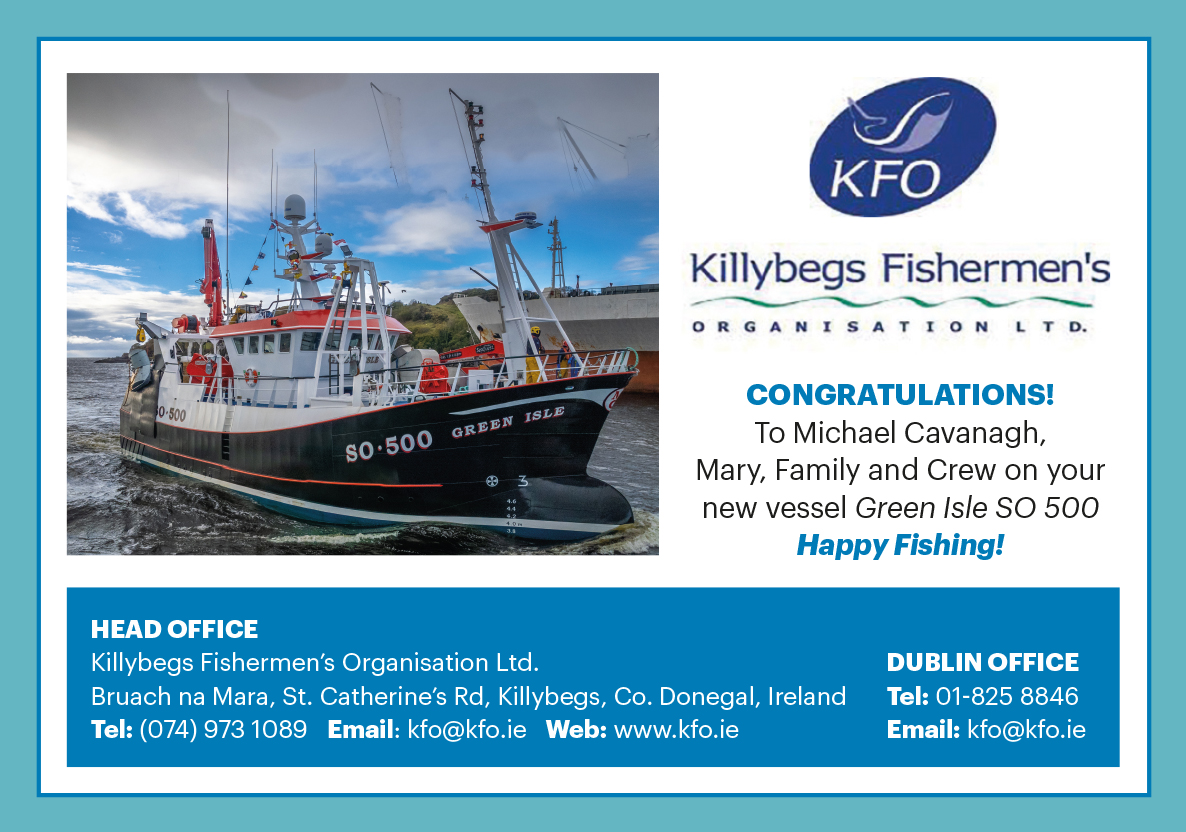 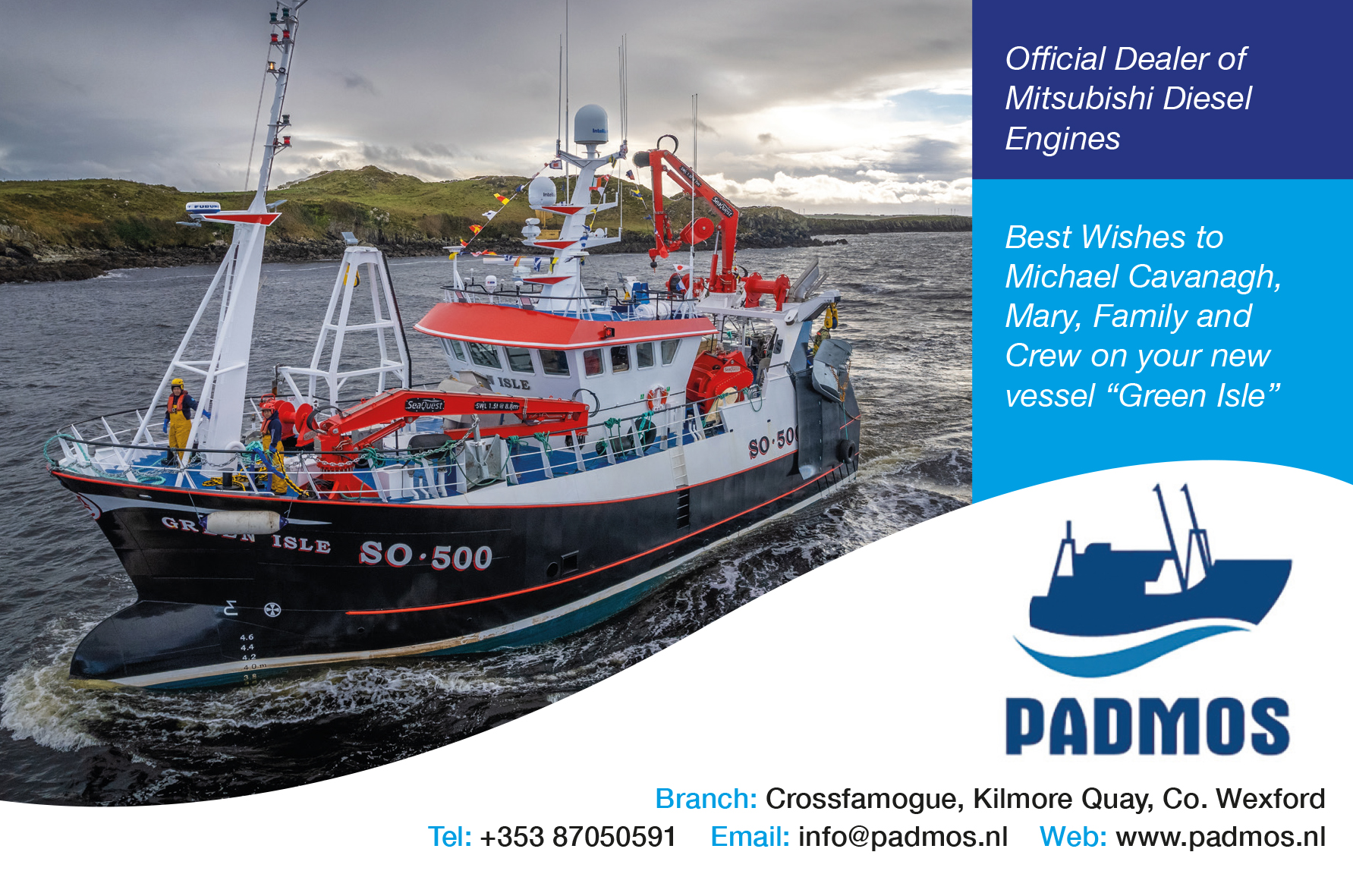 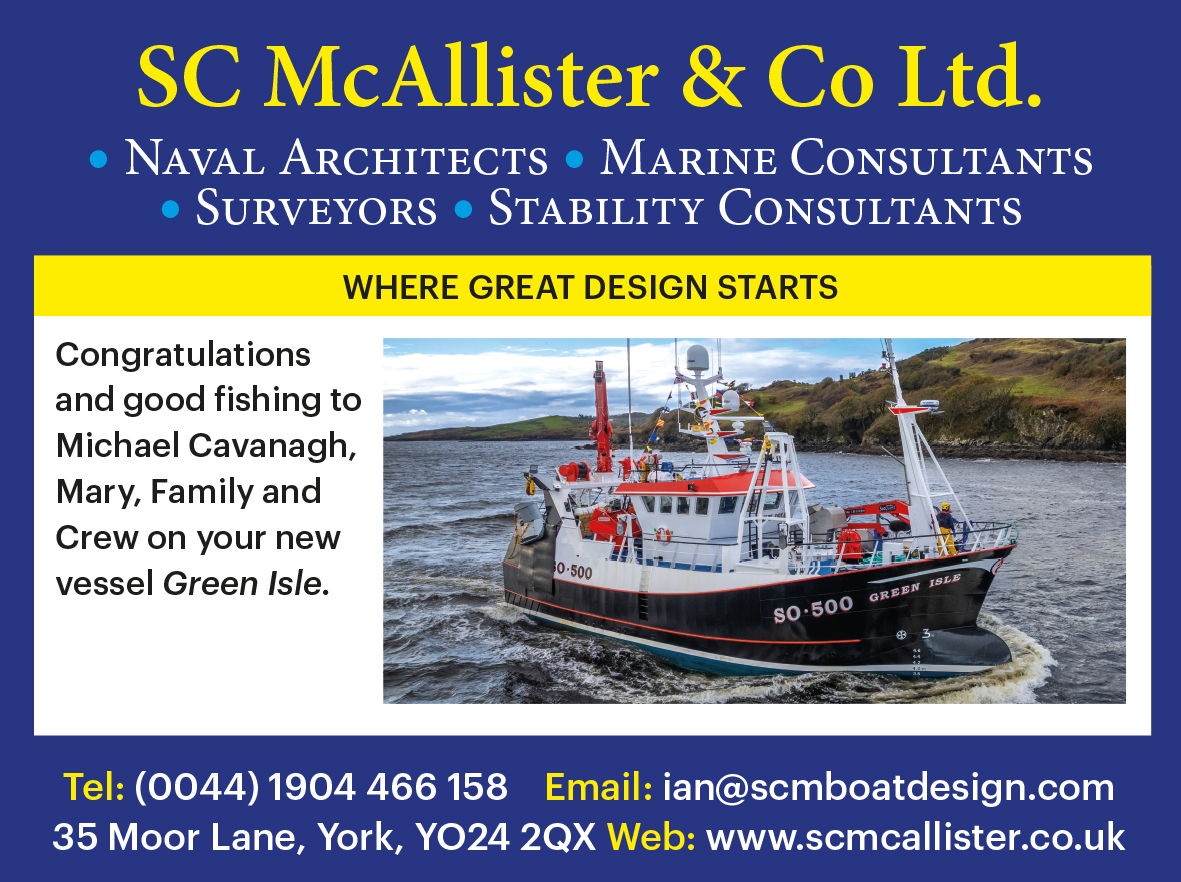 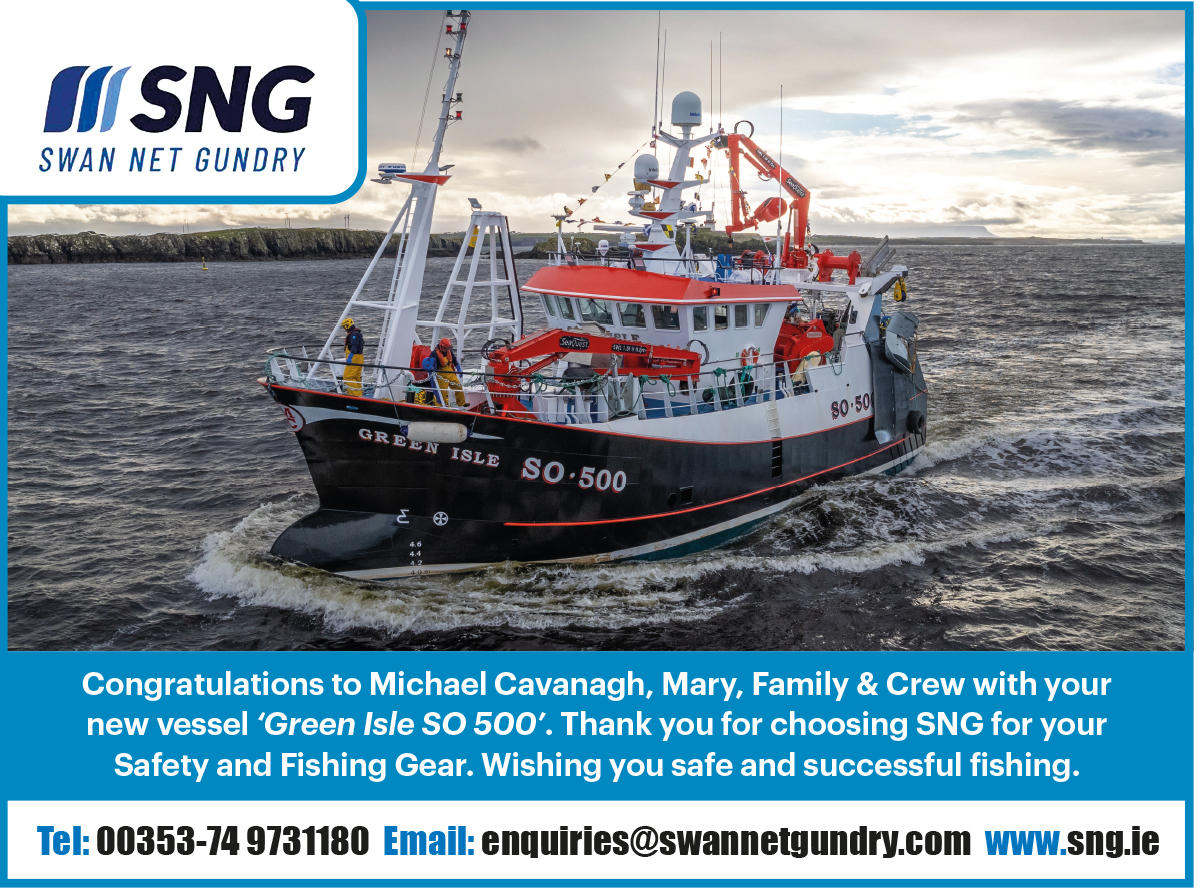 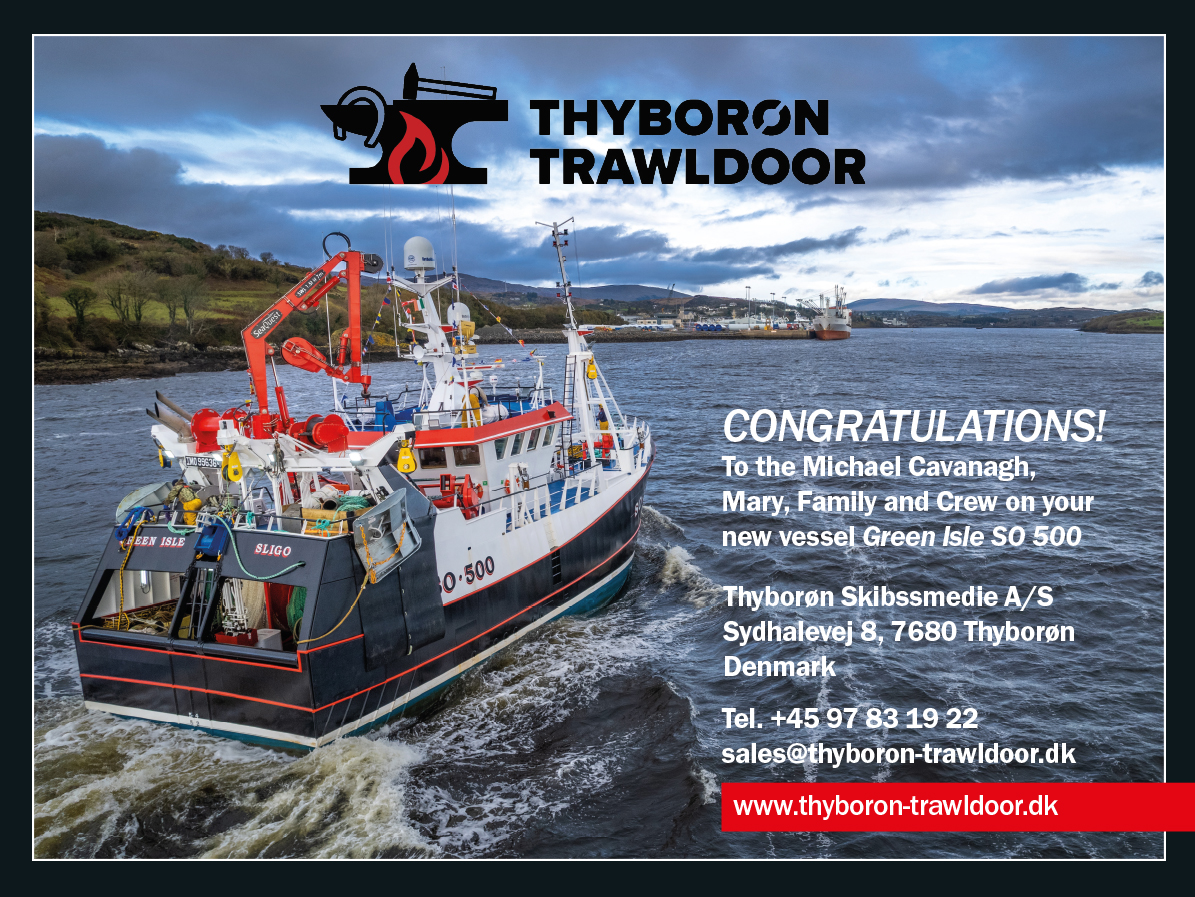 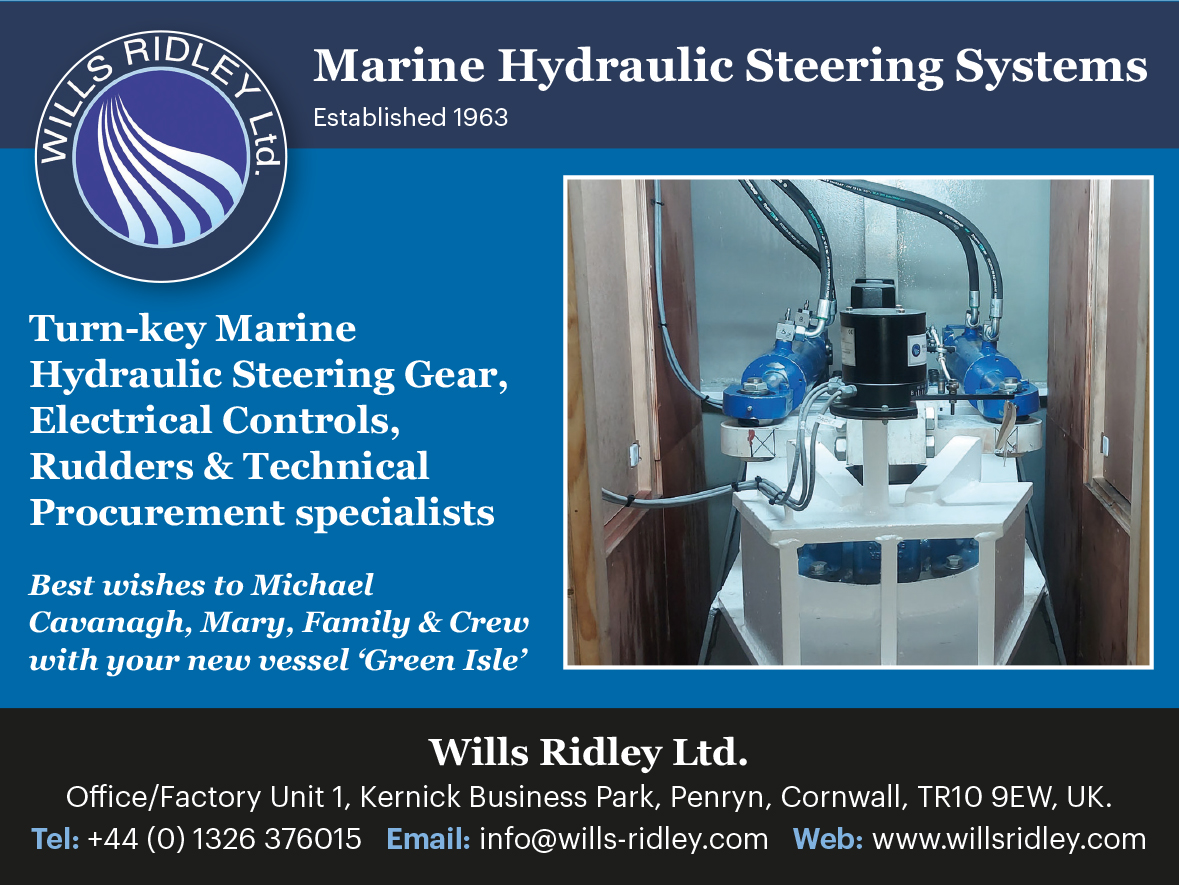