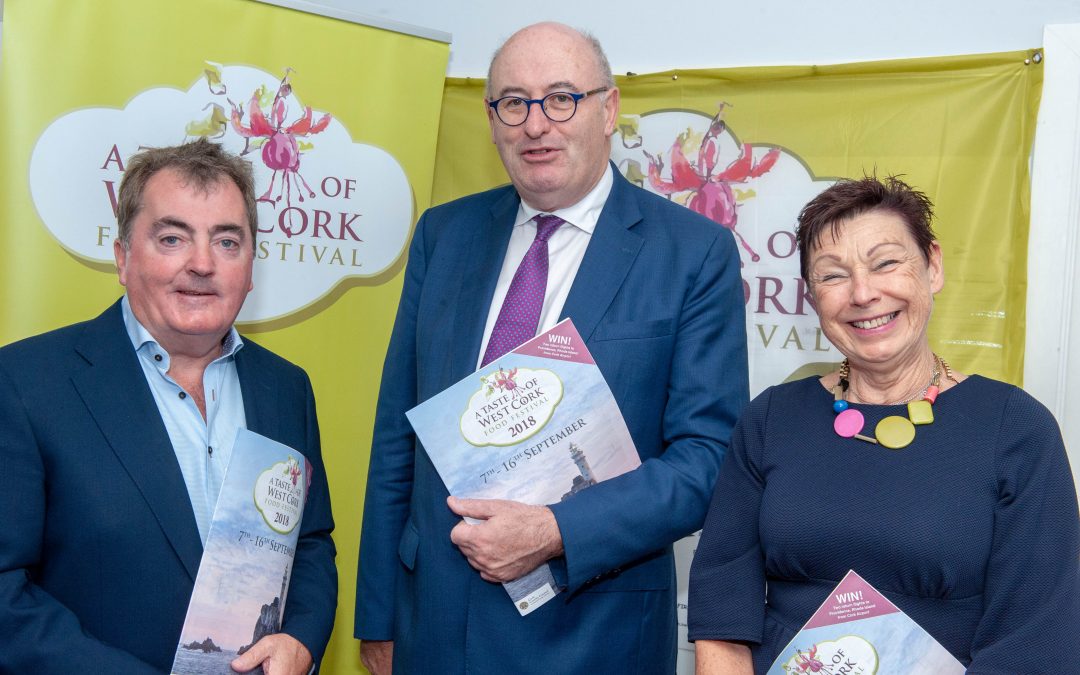 As avid foodies all over the island salivate at the thought of the upcoming A Taste of West Cork Food Festival (6-15th September) – including international food fans who have travelled long distances to be a part of the gourmet action – organisers of the annual festival are also keen to use their platform to showcase West Cork’s prominence as a standalone, sustainable food capital of Ireland and one that strives to protect and nurture its surrounding environment. This will be carried out through the annual West Cork Forum, a free event that will take over the Baltimore Sailing Club on Saturday 7th September and serve as one of the key highlights of the 2019 Festival programme.

Sponsored by Sean and Rose O’Driscoll, this year’s conference covers a hugely pressing topic, namely ‘Facing the Challenges of a Rapidly Changing World – Our Survival’. An all-day event, the 2019 West Cork Forum will kick off at 11am sharp, with the morning section running straight through until lunchtime at 1pm. After a brief break, the activity will be back in full swing from 2:30-4:30pm, when the conference element of the Forum will come to a conclusion.

Those attending the West Cork Forum can also take advantage of another A Taste of West Cork Food Festival programme highlight, which will be held in the area on the evening in order to celebrate the centenary of the RNLI Baltimore. The event, taking place at Baltimore Harbour from 5pm is also free of charge to the public and will feature a rescue demonstration staged by the RNLI Lifeboat station and the Coast Guard helicopter, giving onlookers an opportunity to witness the bravery and professionalism of the volunteers that battle the elements and put their lives at risk to rescue those in danger at sea.

Following an engaging morning and afternoon filled with debate, discussion and contemplation, lucky ticketholders (to a now sold-out event) will be invited to celebrate and sample all of the finest produce that West Cork has to offer, with a drinks’ reception at the Baltimore Sailing Club, followed by a gourmet seafood dinner at The Lookout Restaurant. Pre-dinner drinks will be complemented by a special performance from St Fachtna’s Silver Band, while a seafood feast served up by Kate Jacob and her team at The Lookout will showcase the bounty of the Atlantic Ocean, with each course paired with carefully selected Australian wines. During the dinner, critically acclaimed Dutch cookbook author, recipe writer, TV presenter and culinary editor Yvette van Boven, will address the crowd and bring yet another memorable, educational Forum to a close.

Speaking ahead of next week’s conference, His Excellency Richard Andrews, the Australian Ambassador to Ireland, said: “This festival and indeed the West Cork Forum highlights the love and knowledge the people of West Cork have for their own place, their pride in the quality of the fruits it bears, and their commitment to managing their land sustainably for the future. These are values Australia’s Aboriginal people have held for over 60,000 years, and of which Australians today remain proud. Our communities, although separated by land and sea, remain intrinsically linked thanks to the major role played by Irish people in the building of Australia as it is today. We want 21st century Ireland – and especially West Cork – to be an ongoing part of the story of our national cuisine and we equally want Australia to contribute to the evolution of Ireland’s culinary landscape.”

He added: “We look forward to celebrating our mutual commitment during this ground-breaking visit and to sharing an educational experience through the West Cork Forum.”

Also commenting on an event that promises to be one of the busiest of the Festival, Chairperson of the A Taste of West Cork Food Festival voluntary committee, Helen Collins, said: “This year’s topic is undoubtedly of great importance to all of us as citizens of the world, and it certainly holds particular prominence for those of us living in West Cork and familiar with its rich landscape and the huge efforts of its local people in contributing to sustainability, food quality and combating climate change. Our status as one of Ireland’s most prominent food capitals gives us a natural platform to hold such serious discussions on sustainable food safety and environmental health and the West Cork Forum addresses all these issues in depth. This status, combined with a list of speakers that are as esteemed as they are informed on their individual subject, creates an unbeatable formula for an event that will both enlighten and inspire. We are proud that through the annual Forum and bountiful programme, our Festival continues to excite and educate those that visit this heavenly part of the planet.”

For further details on the West Cork Forum and A Taste of West Cork Food Festival, which runs from 6-15th September, visit www.atasteofwestcork.com. To book events please call the venues directly.