Surrendering To The Rhythm Of The Sea 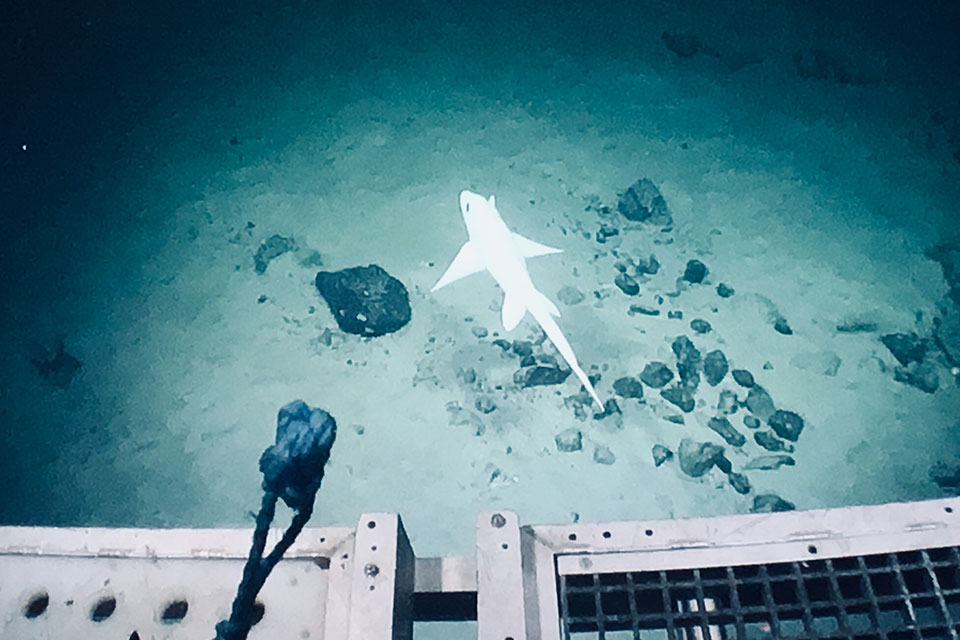 Since 2017, European artists, writers and composers have been embarking on surveys on the Marine Institute’s RV Celtic Explorer as part of the Aerial/Sparks project. Created by artist Louise Manifold for Galway’s European Capital of Culture programme, Aerial/Sparks will result in the creation of standalone artworks for radio broadcast in autumn 2020.

For this ROV (remotely operated vehicle) survey, the research group, led by University College Cork’s Dr Aaron Lim, recovered landers deployed by the team on a survey earlier in the summer. These monitoring systems were recording the speed, temperatures and direction of the currents around cold-water coral habitats at several sites along the Porcupine Bank Canyon, a submarine canyon over 300km from the west coast of Ireland. The landers also trap samples of the food, sediments and microplastics being deposited around the corals to understand conditions and how the corals are coping with changing oceans.

For Kennedy Browne, the chance to go to sea on a research vessel was a dream invitation and a unique artistic opportunity. For Aerial/Sparks, Kennedy Browne were excited to work further with methods of audio recording and with the medium of radio as a form of transmission.

Collaborative reading and scripting is a big part of Kennedy Browne’s method of working together and they share an enthusiasm for working collaboratively across disciplines. During the research survey, they were struck by how the data gathered from the coral banks could be of use to scientists from very different disciplines, from geology to zoology: “It was impressive to see knowledge being collaboratively shared and worked through in this way. Seeing and thinking about coral as a material in this way led us to some research into its mythology, and its representation in paintings from the fifteenth to nineteenth centuries. It’s a richly evocative material and we hope to incorporate it into our project.”

The experience of being at sea and on a 24-hour working ship made a huge impression on the artists who became fully immersed in this constantly moving, working vessel. While acknowledging the pressurised environment that demands a huge input of energy and resources from everyone involved, they were impressed by how the team of scientists and crew worked together in concert: “The atmosphere is sensitive to how the work is going, what the weather is like, what’s going to be served for dinner. Suspense and humour punctuate conversations and silences unevenly, with a constant background feed of data and commentary on that data — from the wind, the ocean, from landers dropped a few months ago or seismic events that occurred thousands of years ago. Time thickened and acquired an unusual density. As the days progressed and work was going smoothly, there were more opportunities for conversation and more music heard on the radio.”

The main focus of the expedition was to retrieve all eight lander systems, which had been deployed between 700 and 2,500m water depth, using the Marine Institute’s ROV Holland 1. The artists watched the video feed of the ROV searching the ocean floor for landers: “It’s difficult to convey the tension and awe of watching the feed. We witnessed incredible beauty and banal violence on the seafloor at the Porcupine Bank: an albino rabbitfish (Chimaera monstrosa), and moments later, a discount shopping bag caught under a rock. Overall we found these contrasts of the sublime and the commonplace were a pretty striking marker of our experience.”

The discovery of plastic rubbish at the bottom of the canyon (2,125m) underscores the reach of human plastic waste and the samples will be analysed by the scientists to see if microplastics are being fed to the corals from above. The artists took photographs, video and audio recordings inside and outside the ship, talked to the scientists and crew about their work, and visited the dry lab and wet lab frequently. Following the survey, they aim to pick up conversations they’ve begun with a new focus and are as intrigued by the working culture of the ship as the scientific research. The marine geology team will return to the canyon and similar habitats for a number of years to monitor the changes in the environment around these habitats and Kennedy Browne hope to return to sea for another survey in 2020.

The next step for Kennedy Browne will be a collaborative writing week in the winter. They are planning a new sculpture and audio broadcast for development and production next year, which will be presented as part of the Aerial/Sparks project in 2020.

To keep up to date with the survey results and further research of UCC’s Marine Geology Research Group visit http://marinegeology.ucc.ie

Aerial/Sparks is funded by the Galway European Capital of Culture 2020 programme, the Arts Council of Ireland Project Awards and the Marine Institute. For more information on Aerial/Sparks visit the Galway2020 website