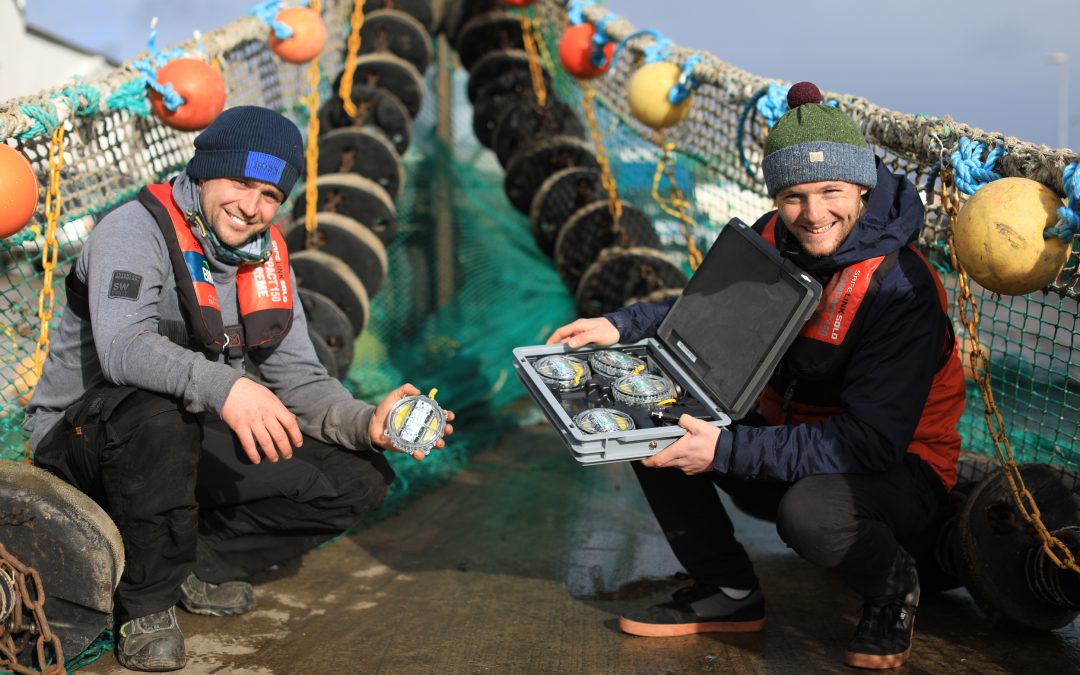 Fisheries discards have been high on the public agenda in recent months. Despite a slew of factual inaccuracies, the Netflix ‘Seaspiracy’ opinion piece has raised awareness around discards and other fisheries environmental challenges. The Journal.ie also published a recent exposé on discards – an age-old fisheries issue.

The Journal article focused on discard figures from an Irish report to the EC on implementation of the landing obligation in 2019. Unfortunately, no mention was made of the technical solutions developed by the Irish Industry and BIM to reduce such unwanted catches, thereby omitting an important part of the picture on Irish fisheries conservation and sustainability.

A total of nine Irish solutions have been implemented in EC legislation in response to the landing obligation with two more currently under review. There is no one-size-fits-all solution, but measures such as the 300 mm square-mesh panel (SMP) and survival exemption in the Nephrops fishery greatly reduce unwanted catches and are now widely used and availed of. T90 mesh is increasingly deployed by seiners and trawlers targeting whitefish. In addition to being a highly effective conservation measure for undersize fish, T90 enhances fish quality and value, important attributes given the range of ongoing challenges affecting fisheries profitability. 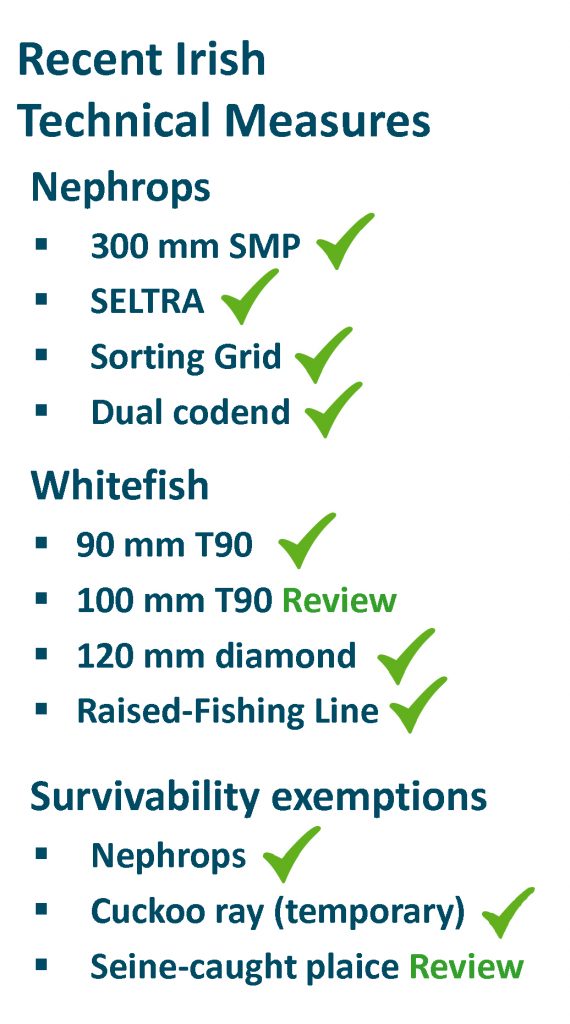 As outlined in the landing obligation report, 2019 was a particularly good year for development and implementation of Irish technical solutions such as the dual codend in the Nephrops fishery; cuckoo ray survivability; 120 mm diamond-mesh codend, 90 mm T90 codend, and staggered or raised-fishing line (RFL) for mixed demersal fish.

The RFL was tested and developed by BIM and Industry through a series of field trials and a flume tank workshop. The gear significantly reduced low quota cod and plaice, undersize whiting and haddock, and skates and rays by allowing them escape at the mouth of the trawl. Importantly, catches of market-sized whiting and haddock were maintained.

Implemented in the Celtic Sea since last year, the RFL avoids the need for fishery closures so is of benefit to fishers as well as fish stocks. Like fishing, fine-tuning gear to optimise catch performance forms an important part of the gear technology process. Recent research in a US shrimp fishery showed how artificial light can influence fish behaviour and reduce unwanted catches at the mouth of the trawl, suggesting potential application to the RFL.

Led by BIM’s Martin Oliver, a preliminary trial on the effect of lights on the RFL was carried out in April in collaboration with Patrick McClenaghan Jnr. and crew of the MFV Foyle Warrior. The vessel targeted mixed demersal fish species in the Celtic Sea using RFL gear with and without green LED lights, supplied by SafetyNet Technologies and Lindgren Pitman. Arrays of 10 lights were mounted on the fishing line with species catch weights recorded by the crew in line with COVID-19 sampling protocols.

Haddock, the main species encountered during the trial, clearly displayed a negative reaction to the lights. Substantially more haddock were caught when the escape gap was illuminated while substantially less haddock were caught when the fishing line or main body of the trawl was lit up. As expected, very few cod were caught with the RFL gear. The lights had minimal impact on whiting although catches of this species were low given the use of a 110 mm codend with a 160 mm SMP in line with current legal requirements. These different behavioural reactions to light are in line with preliminary findings from ongoing Scottish lab experiments.

Our results are encouraging given that quotas are substantially higher for whiting compared with haddock in the Celtic Sea. Codend and SMP mesh sizes have crept upwards in response to mixed species stock advice to the point where the commercial viability of a directed Celtic Sea whiting fishery is currently questionable.

The RFL is a proven cod avoidance measure. More comprehensive testing is needed but incorporating underwater lights on the RFL seems to have great potential for minimising haddock catch. Effective avoidance of these low quota species at the trawl mouth would help towards a case for codend meshes which retain commercially viable quantities of whiting. A previous gear trial on the MFV Foyle Fisher demonstrated extremely good whiting selectivity and quality using 80 mm T90 mesh – worth a potential revisit in future RFL trials.

BIM would like to thank Patrick McClenaghan Jnr. and crew of the MFV Foyle Warrior for a successful collaboration. We also wish to pass on our sincere condolences to the McClenaghan family on the recent passing of Patrick McClenaghan Snr., a great fisherman and a true champion of Irish fisheries conservation work.

This work is supported by the European Maritime and Fisheries Funding. A full trial report is available at: www.bim.ie/publications/fisheries