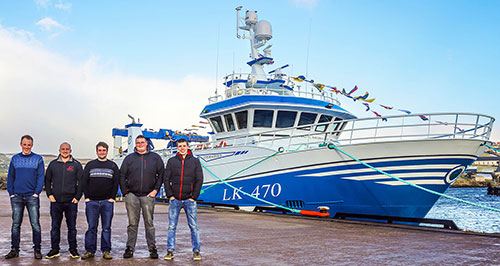 A Shetland fishing partnership has just taken delivery of the brand new Courageous (LK470) and is in the process of getting ready for the first fishing trip with the 28 metre whitefish trawler. Skipper Ian Shearer and his partners Christopher Irvine, James Johnson and Malcolm Reid sailed into their home port of Symbister  after crossing the North Sea from Hvide Sande in Denmark where the vessel was built. The new vessel replaces the previous Courageous, formally known as the Guardian Angell, which they had bought from Yell in 2015. The move enabled the young fishing partnership – four men were aged between 17 and 25 at the time – to get a foothold in the local industry. The fifth shareholder in the company is local fishing agent LHD.

Skipper Shearer said said that after fishing with the previous Courageous for a number of years they realised that getting a better and bigger boat “would be a good option for us”. Shearer, who won the Fishing News young skipper of the year accolade in 2016, said the new Courageous “was a lot more advanced” and would make life at sea safer and, hopefully, also more profitable. Courageous was designed in house and built by the Vestværftet yard. The hull was built in Gdansk, Poland and completed in Hvide Sande. 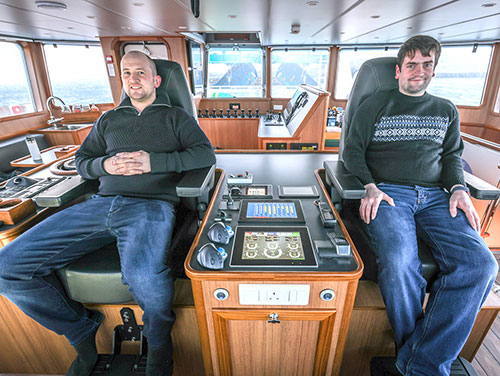 Twin Mitsubishi 6D24, 195 KVA, 3 x 400 V, 50 Hz auxiliary engines  provide electrical power and a Mitsubishi 40 KVA harbour genset is also fitted. The vessel is layed out as a single rig trawler with the catch bagged  and landed at the stern before being conveyed to a automated fish handling/sorting system supplied by VCU which includes a KM-Fish gutting machine and pack at sea system. The 1,200 box capacity refrigerated fish room was installed by Lemvig Maskin & Køleteknik and twin 3 ton a day ice makers keep the catch at optimal freshness.

Congratulations on the latest addition to the local fleet came from Brian Isbister, the chief executive of the Shetland Fish Producers’ Organisation. The Shetland PO was instrumental in helping the young men getting access to the all important quota when they started out in 2015. Isbister said buying a boat and acquiring the necessary quota was as “enormous task” in financial terms and beyond the financial capability of most aspiring young fishermen.

In Shetland however, both the PO as well as Shetland Islands Council have over the years invested millions in fishing quota, held communally, and rented to the fleet to manage fishing entitlements. “In the Shetland context we are fortunate that we have facilitating infrastructure to enable this type of thing to happen, and do recognise that in some other parts of Scotland it has come to a stage where it is beyond the reach of young men,” Isbister said. “That is something that we got to try avoid happening here – so we always be sure that there is that opportunity.”

Isbister said the catching sector had enjoyed a number of good years and the fact that Shearer and his partners were prepared to invest into a new vessel demonstrated the confident mood the industry was in. This follows the opening of two new state of the art fish markets in Scalloway and in Lerwick and favourable prices paid for fish landed at either of the local markets. But margins have become a lot tighter lately at a time many in the industry had expected things to become much better.

With Brexit done, the industry first had to cope with export delays at the UK borders, the UK’s delegation at fisheries talks had to learn how to act as an independent coastal state, and finally the TAC (Total Allowable Catch) for cod was reduced by 10 per cent for this year – a cut that is particularly painful for the local fleet. 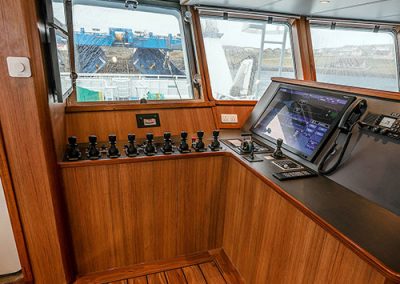 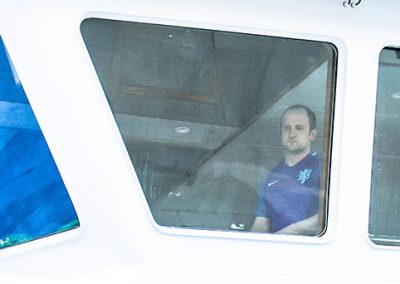 Skipper Ian Shearer takes her alongside for the first time 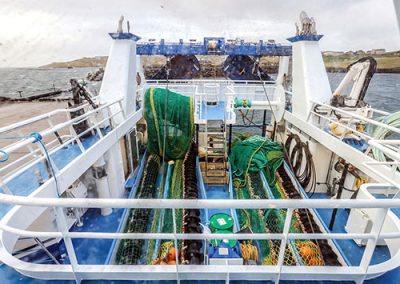 Looking aft from the wheelhouse 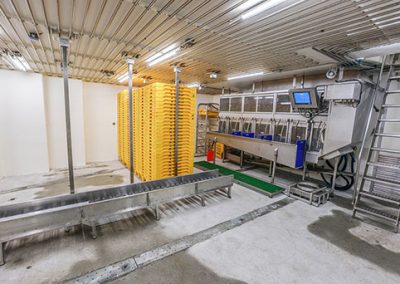 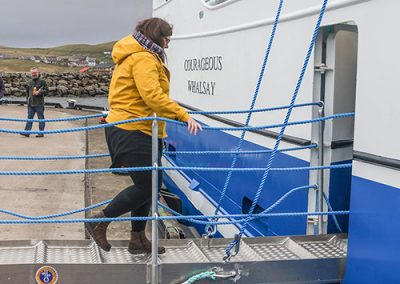 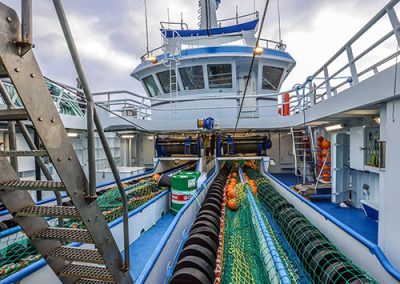 A View of the trawl deck 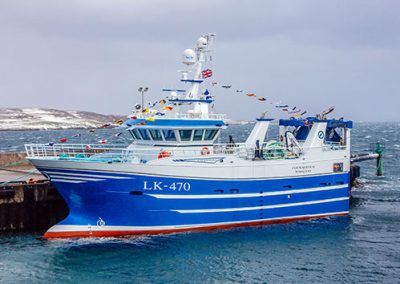 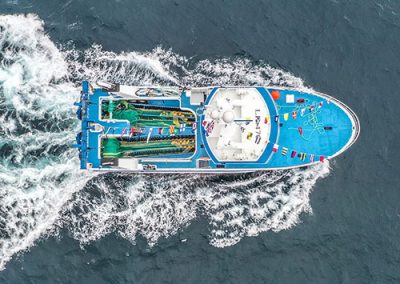 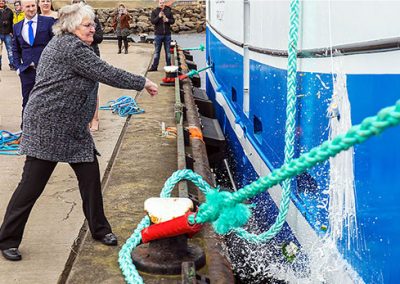 Agnes Shearer does the honours naming the ship 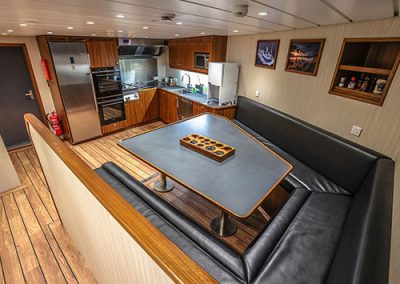 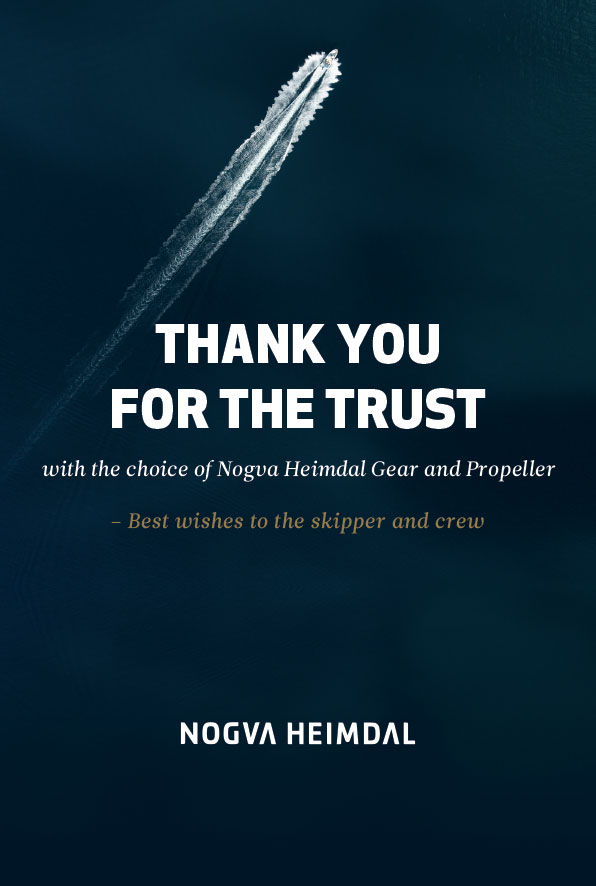 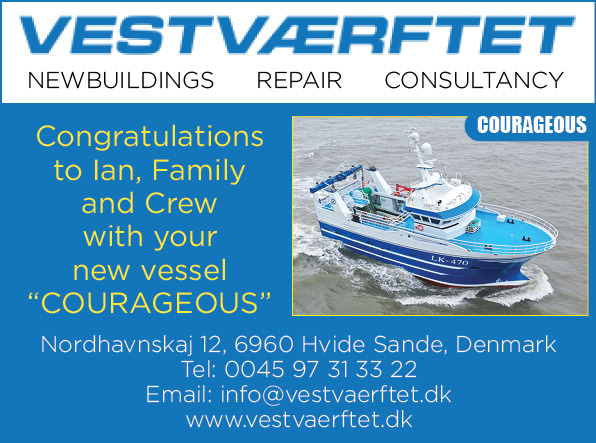 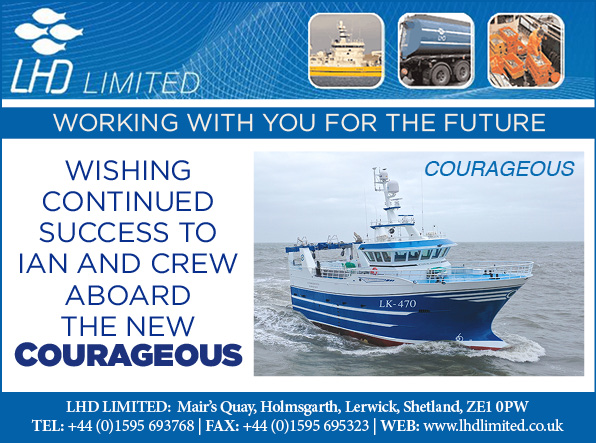 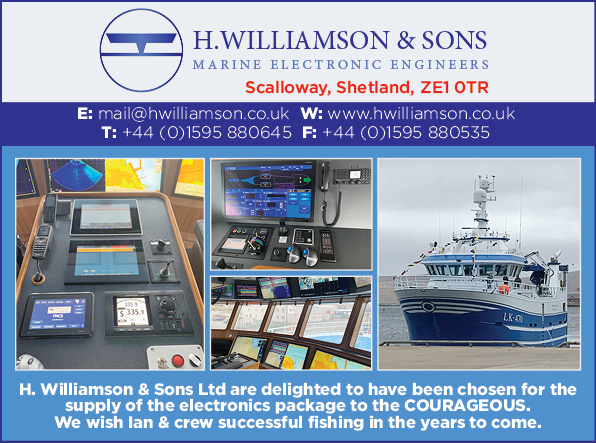