CHARISMA is the latest pelagic trawler to join the Whalsay fleet and is the fifth such vessel in little over a year to be welcomed to “Da Bonnie Isle”.

At 75m long and 15.3m beam she is five metres longer and 0.8m beamier than her predecessor, which has gone to Iceland after 16 years service to the Charisma partners.

Shareholder and skipper Davy Hutchison is continuing at the helm with William Polson also a skipper and Billy Hughson as engineer.

Five of the original nine shareholders are still fishing on the Charisma, which is understood to have cost around £25 million. She is the fourth vessel to bear the name – the first being Davy’s initial foray into pelagic tankships.

Come next Christmas, he will have completed 60 years at the fishing, having started with the 53ft Brighter Morn, which went to the drift net in summer and seine-net in winter.

Being ship’s cook, it was Davy’s job to give the heavy bush rope (which was at least a mile long) an annual tarring, then to coil it when the drift net was hauled. That was in the days when gloves were unknown aboard a fishing boat and the rope was in a good mess for the first few weeks.

Fishing at the seine net in winter would be a tough job by any standards, but they “knew nothing else” then.

Davy acquired a small scallop boat called the Heather Belle and acted as relief on various other fishing boats. He then moved on to work on the inter-island ferry Grima, which replaced the Earl of Zetland on the Lerwick to Whalsay run in 1975.

There were fewer ferry men in those days and they tended to work long hours through the night. Davy was not contented with it and was back at the fishing after three years.

As for now, Davy said that he would “play it by ear” as far as continuing as skipper went.

As to the new ship, Davy said he had a “fairly favourable” impression. “She seems to steam well, very silent and smooth.

“It was a fine run, it was fresh in the morning but there was no sea that came in over,” he said of the trip back from Karstensens Shipyard, in Denmark.

The vessel’s steelwork was completed in Poland and she was fitted out in the Danish yard, with the accommodation fitting done by Norwegian firm, Maritime.

Although the Charisma’s plans were among the first to be signed among the new generation of ships, various hold ups meant she has only been completed now.

Charisma was catching mackerel around Shetland before Christmas with engineers from the equipment companies in attendance. The rest of 2019’s quota was swapped for 2020, with good prices meaning there was no difficulty getting a trade. “We will have most of two quotas to catch next year,” the skipper said.

The vessel usually lands to Pelagia processing plants which now owns what was previously Shetland Catch as well as several factories in Norway.

With a 42 per cent increase in 2020’s mackerel quota now confirmed, and prices holding up, the immediate future for the pelagic fleet is looking good.

Davy said: “The science is good so there is hopefully a good picture for the immediate future.”

Brexit remains the big uncertainty, with a clearer picture maybe emerging after the general election. If there is another hung parliament, what will throw more sand in the gearbox.

Davy added: “The big one for us is herring. We have a very, very poor share of herring and it’s nearly all fished in UK waters.”

Independence from the CFP might allow Britain to claw back some of that quota.

The first Charisma was built in 1979 as a purse netter. She was a sister ship to the Antares, built the year before. She was lengthened in 1985 and the following year she was converted to trawl and paired with either Serene or Research, but continued to purse when required.

The first Charisma had four cabins – not quite as luxurious as the present vessel’s accommodation. But it was still “a big improvement from seven or eight men shoved down a peerie cabin aft,” said Davy.

“A grain o’ weather in a big boat, it’s certainly more comfort, safety and everything.”

The next ship was built at Egersund in 1995 and she was followed in 2003 by a vessel built in Turkey and fitted out at Flekkefjord, a construction pattern that has been repeated many times.

The 1995 Charisma is still fishing from Denmark where she is known as the Rockall.

Charisma will be sailing with a big crew of 14, including some new recruits who will be trained up in the first few trips. That number might in future reduce as some of the older hands decide to step down.

“We just want to get some of the young ones involved in the electrics and engineering work,” said Davy.

The five original partners still on the Charisma are William Polson, Larry Williamson, Jimmy Tulloch, John Pearson and Davy. There are another four non-fishing shareholders – all with family connections.

Charisma has a refrigerated sea water (RSW) tank capacity of 2,380 cubic metres but is unlikely to take more than 1,800 tonnes of mackerel at a go, a lot depending on the time of year and firmness of the fish.

H Williamson & Sons of Scalloway, “the best you could get,” according to Davy, supplied and fitted out the electronics in Charisma’s wheelhouse, a powerful array of touch screen controlled devices.

Charisma was taking gear on board earlier this week, including a new net from Swan Nets.

Rapp MacGregor supplied the winches, two net drums and fish pump. The all-electric gear package is much quieter than hydraulic and seems very satisfactory in the other vessels that have such systems installed. It is the first time the Charisma has gone with Rapp winches, having had Karmoy installed in previous vessels.

SeaQuest Systems of Donegal supplied the cranes which are the only hydraulic powered gear on the ship.

The main engine is a 7200 kW Mann V12 powering a 3200 kW shaft generator as well as the 4.2m Brunvoll propeller. Fore and aft Brunvoll thrusters (fore thruster is retractable) of 890 and 950 kW can be powered by the shaft or the auxiliaries.

There are two 1550 kW Caterpiller auxiliaries and two 250kW harbour generators. Normally only one generator would be in use when the Charisma is tied up at the pier but all the engines can synchronise together.

Best of luck and safe fishing to all on the Charisma, from all at The Skipper. 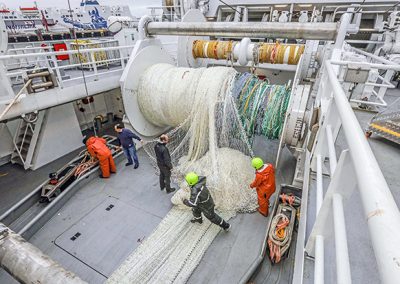 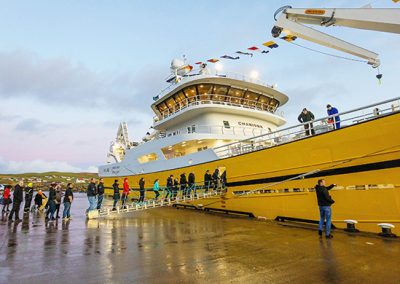 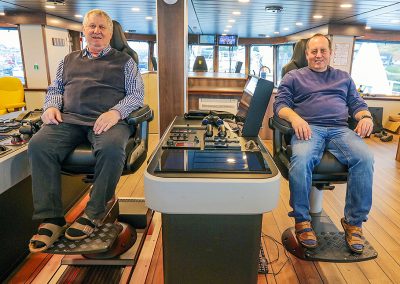 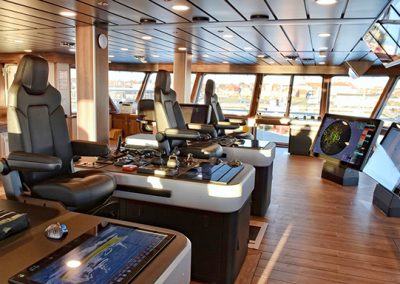 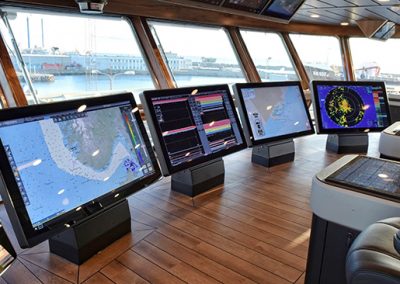 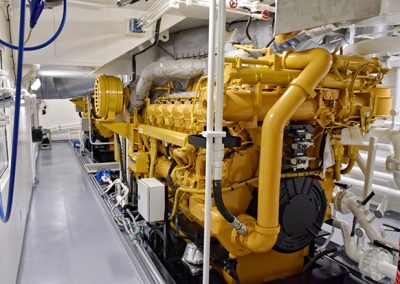