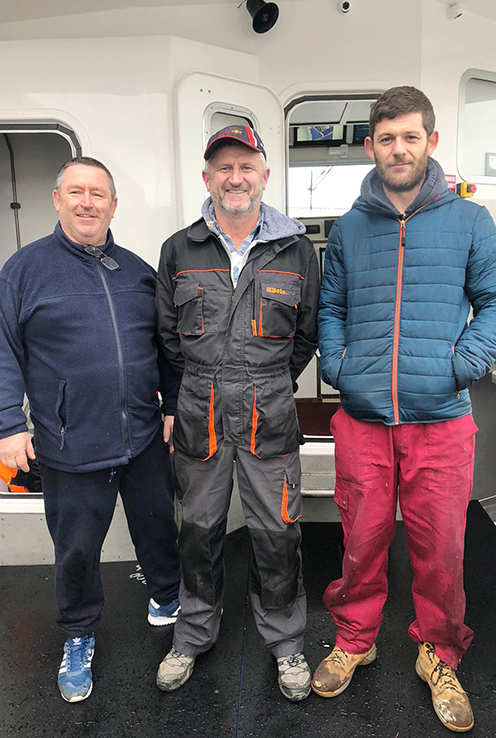 Built for Ian Mathieson, after being launched at the yard early in November, following successful sea trials, Dalwhinnie was handed over and made her way home to Stonehaven with crewman Neale Clark on board and skipper, Ian at the helm on November 13.

The largest new vessel to have been completed at the Kilkeel yard since the 2015 built 14.1m Álsviør K 337, with a beam of 5.2m and a moulded depth of 2.26m, Dalwhinnie is 14.65m in length. Based on a Buccaneer 46 displacement hull, moulded in Cornwall by Paul Ching, the vessel has a soft nose stern, bulbous bow, and transom stern.

A replacement for Ian’s Trejar built Cleopatra Fisherman 42 Ian told The Skipper, “The last two boats I’ve had from Trefjar have been very successful, but it was time to move up a scale. Their next size boat is a 50-foot boat, and due to restrictions with both licenses and bigger engine costs, we decided to look at the various alternatives of what was available and decided to change from a fast planning, semi-displacement boat to a full displacement boat – heavier duty, so that we could do slightly longer trips when the weather allowed us to.”

Ian had a good idea with respect the quality of work done at the Kilkeel yard, having seen two of Gerry Smyth’s boats on display at the Skipper Expo Aberdeen some years back. “Although they were smaller, I did look at the quality of finish then and it just sort of stuck in my head,” he said. “When it came time to look at the various options, Gerry had already completed a similar hull to what I was looking at for the Orkneys — the Álsviør — so that gave me an insight”.

“We went up to the Orkneys to have a look at the finish of the boat there and when I saw the final build, though we wanted a different style with the engine room aft and various other bits and pieces, I knew that was what we were looking for”.

“I like the quality of their finish. They go in to do their job and they don’t realise how many people in the UK are watching them. And each boat that comes out is getting better and better”.

“They’ve earned quite a reputation”, said the Stonehaven skipper.

“Just ask any fisherman within the UK where they are wanting their boat built and they’ll say Gerry’s yard. It’s becoming so popular because of the quality of their workmanship. The guys, they just take it for granted, they don’t realise how good they are at what they do.”

“The Irish lads,” he said, “are setting records there as far as I’m concerned.”

Regarding the bespoke Dalwhinnie Ian said: “We started right from scratch. I did a complete set of drawings of the boat that I wanted, to allow Gerry to do a quotation, bearing in mind that with all boats of that size and that complexity you are going to have deviations as you build, little things crop up, things need to be changed and adjusted and we just dealt with them as they came up.”

Though slightly behind schedule on account of how busy the yard is, the build from there went to plan. According to Ian, “It was a really painless build. They’re very professional in what they do. Gerry’s lads are easy to deal with. Nothing is too much for them.”

Always bouncing ideas off each other throughout the build with what they wanted and what could be done, Ian said, “I would say 70/40 in their favour, most of the stuff they came back with was a better idea”. Gerry Smyth said, “Me and my build team (led by Joel Chambers) enjoyed the challenge of the Buccaneer 46 build.

“Ian had very definite ideas for the finish on his boat and it was great working alongside someone who had done his research.”

Delighted with that finish, Ian said, “They didn’t scrimp on anything. There were areas that I got a surprise with – the quality of the fittings the fixtures that they’ve used”.

“They’ve gone for the best that they could get for the vessel and that becomes most evident when you go in,” he said.

“She’s not conventional, because these kinds of vessels have normally got a forward engine room with a long shaft going to the stern of the vessel. I didn’t want that, I wanted the forward wheelhouse, with the accommodation up forward, engine room’s aft, with a short shaft — I don’t even think it’s a metre and a half long — no vibration, it’s a solid built shaft.

“We’ve extended the engine room a metre bigger. Priority was maintenance and looking after the engine. The hold is still huge. So we have the aft section that holds the steering gear and it holds two tanks – one of them is for fuel for the gensets, one of them is fresh water we use that for balance as well. Then we’re into the main engine room which is the biggest compartment of the whole boat.”

Cooling for the Dalwhinnie’s main engine is provided for by two stainless steel seawater systems. To ensure optimum functioning and longevity, in terms of anti-fouling the vessel is equipped with two Sonihull ultrasonic generators supplied by NRM Marine.

Dalwhinnie is also kitted out with 1.5t Hydroslave hauler, supplied by KK Hydraulics of Tralee. The deck crane on board was supplied by Penny Hydraulics. Pots on board were manufactured by Caithness Creels and Gael Force creels. With storage for 130 boxes, the Dalwhinnie also boasts a dry hold fitted with a refrigeration system supplied by Cool Temp in Kilkeel.

And with a spacious galley, and three berths below deck — all fitted out to an equally high spec — no doubt skipper and crew will be comfortable. Insured by Sunderland Marine, safety equipment aboard was supplied by Blue Anchor Fire and Saftey Ltd.

Targeting brown crab and lobster, weather permitting Ian and his crew will be working 36 hour trips on the Dalwhinnie. “Everything is dictated by weather in these vessels,” said Ian.

Ian will be fishing the Dalwhinnie with Buckie brothers, Neale and Derek Clark. From a well-known fishing family, both live and breathe fishing. “It’s really hard to get guys like that, you can trust them to look after everything and that’s a big weight off your shoulders,” said Mathieson who at the time The Skipper was going to print was waiting on the final paperwork and hoping to “get straight into it” after that. Landing into Stonehaven, their catch will be sold to the Crab Company (Scotland).

Dalwhinnie had a chance to prove her seakeeping abilities on the trip home from to Stonehaven when the already “scruffy” weather changed and got a lot worse. “But we were already committed by then,” said Ian, so they “went right up across the Irish Sea” and “punched into it” where they had to. “Right up the west coast was horrible and then we got to the top and it was better. We got past Cape Wrath and then it was nice.” After a stop off in Buckie to see Neale’s family with the new boat, they then steamed from there all the way back to Stonehaven.

Now eager to test her fishing capabilities, on Brexit Ian said, “It’s a big open debate that, it’s all over the place. Whether or not it will affect this – nobody knows. Nobody knows where it is going, how it’s going to pan out.” But, he said, if everybody lost faith every time things were hard in the industry there wouldn’t be a fishing industry.

“We saw the time is right to move up to the bigger vessel. The crabbing industry, to my mind, has always been the poor man’s end of the fishing industry, but over the last 8 or 9 years, more so the last 5 years, with the international markets opening up, the time has come right. There’s definitely a good vibe and a good buzz around the industry just now.

“It’s gone from being the poor man’s part of the industry to a multi-million pound industry with international markets. And this has all been done without any help from governments – any government! Whether it’s British, Scottish, English, Irish, whatever…the lads have built up this reputation for their own seafood on their own.

“And the buyers are clipping your heels to get stuff all the time. Now, there’s a little clink now with this Chinese thing, but I think there’s a bit of politics involved in that. I think that’s going to clear. When the dust settles, it’ll go back to being as busy as it was before.”

“We feel the time is right to make the investment. And processors are investing too – in their facilities, their storage capacities and so on”.

“I think it’s really good at the moment,” he said.

“The likes of Gerry’s yard and other yards, they have a two year wait list and so if you wait until you are absolutely safe, you’re another five years down the line. You have to try and visualise where you think it is going to go and if you’re going to be ok. And, of course, nobody knows for sure, but you just have to trust your instincts at the time and take it from there.”

The Skipper team would like to take the opportunity to wish Ian, Neale, Derek and their families every success and safe fishing with the new Dalwhinnie. 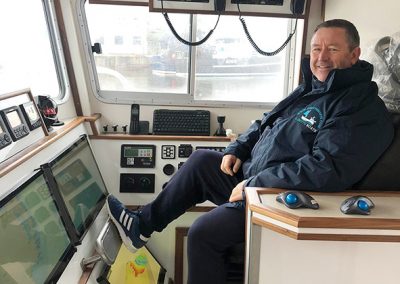 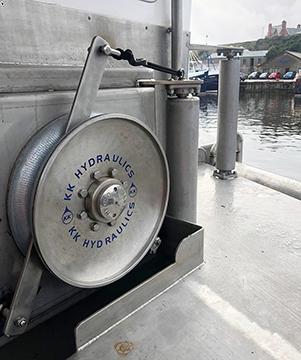 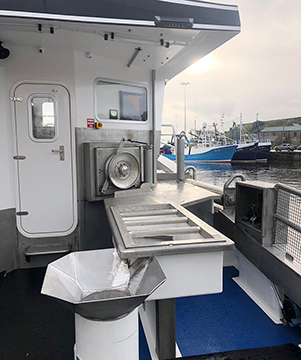 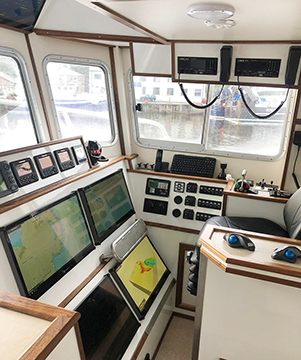 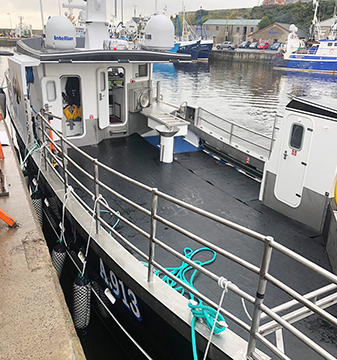 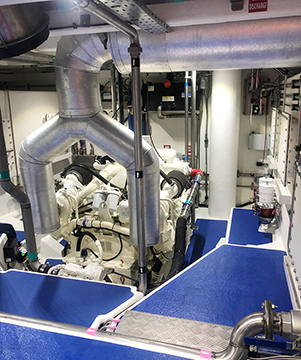