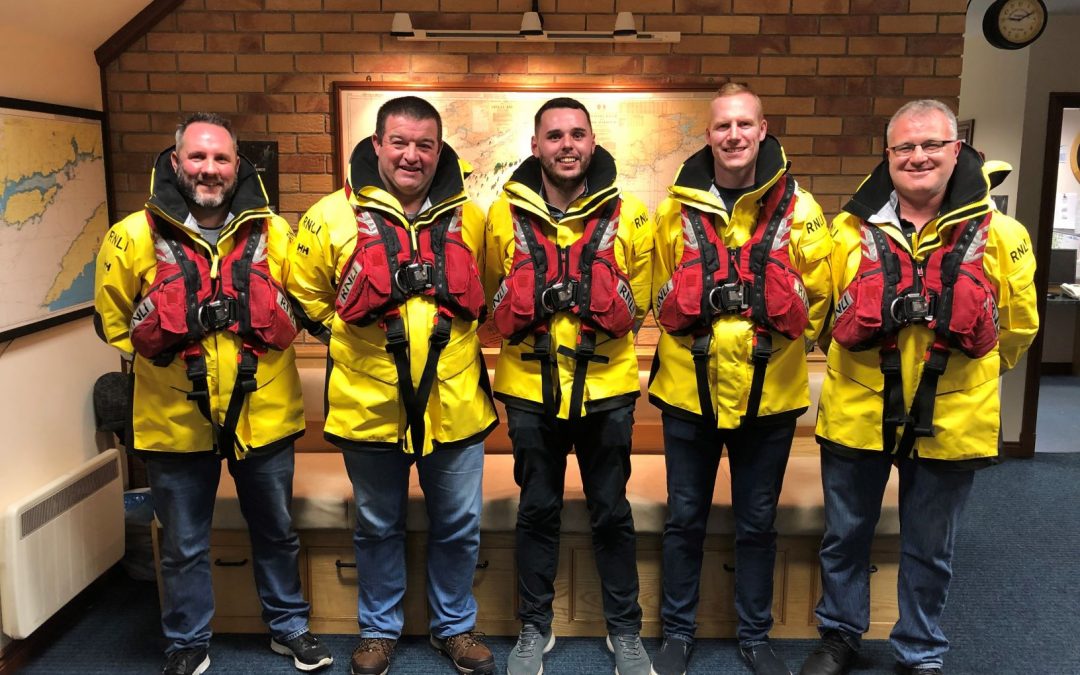 On sale today (June 11th), with royalties from all sales supporting the lifesaving charity, a new book providing a collection of first-hand accounts of some of the most dramatic rescues carried out by RNLI lifesavers around Ireland and the UK over the past 20 years, features the incredible bravery by a Cork lifeboat crew and a former Portrush RNLI crewmember.

With an abundance of drama told from the unique perspective of the RNLI lifesavers, as well as those they rescue, Surviving the Storms features 11 stories of extraordinary courage and compassion at sea, providing a rare insight into the life-or-death decisions the RNLI have to make when battling the forces of nature and saving lives.

Told in the words of Castletownbere RNLI Coxswain Dean Hegarty, included in the book is a first-hand account of the dramatic 2018 rescue of a fishing crew in storm force conditions after their vessel lost all power at the harbour entrance of Castletownbere in West Cork. Six lives were saved that night and the Coxswain is set to receive a medal for gallantry, and the crew and launching authority, letters of thanks from the Institution.

In an extract from the book, the 24-year old coxswain explains what he saw when he and his lifeboat crew came on scene: “Within 10 minutes of the original mayday call, we were on the scene. What I saw when we arrived, I can’t lie; It almost gave me a heart attack. The way the tide was going out and the wind was coming in, it was churning the sea up and creating a big, watery explosion.

“There were huge swells reaching six metres, the height of a two-storey house, tossing the fishing boat around like a rag doll and pushing her ever closer to the sixty metre cliffs to the west of the harbour mouth. The gales were now peaking at storm force 11. My heart started to race as I watched waves crashing up against the cliffs, with the vessel only 30 or so metres away from the rocky shoreline.”

Also featured among the collection is an incredible feat of bravery by Portrush man and former RNLI station mechanic, Anthony Chambers, who, in 2009, swam into a cave to rescue two teenage boys when they became trapped with a fast-rising tide in dangerous conditions, receiving the RNLI’s medal for gallantry for the callout.

In the book Anthony describes the moment he brought the second boy to safety, utterly exhausted after the rescue, to be met by another lifeboat crewmember Gerard Bradley who was onboard the waiting inshore lifeboat outside the cave.

“As we kicked our way towards the boat I felt the strength draining out of me, like sand out of an egg timer, it slipped away. I’m going to have to let him go. The lifeboat was just ahead of us and Reece was secured in his lifejacket. I knew Gerard would get him within moments. The boy would be safe. But I can’t keep on.’

“Despite the ordeal almost being at an end. The exhaustion was too much. I prepared to let go and let the waves take me. I knew that as soon as I did, I’d be swallowed up and drown. I just didn’t have it in me to fight the waves anymore. But just as I went to release my grip and surrendered myself to the sea, Gerard came up alongside us. They’d got to us. I thought.”

Emphasising the dedication of all those involved in the RNLI he said, “We have hundreds of lifeboat stations and thousands of crew members and lifeguards all dedicated to saving lives. Between them, they’ve helped so many people survive the storms and I’m proud of every one of them.”

Also available on Kindle, Apple Books and as an audiobook, Surviving the Storms is available to buy in all good bookstores now. To order a copy online visit https://books.harpercollins.co.uk/surviving-the-storms/