A WHALSAY family fishing partnership recently took delivery of a new pelagic trawler which replaces another of the same name. 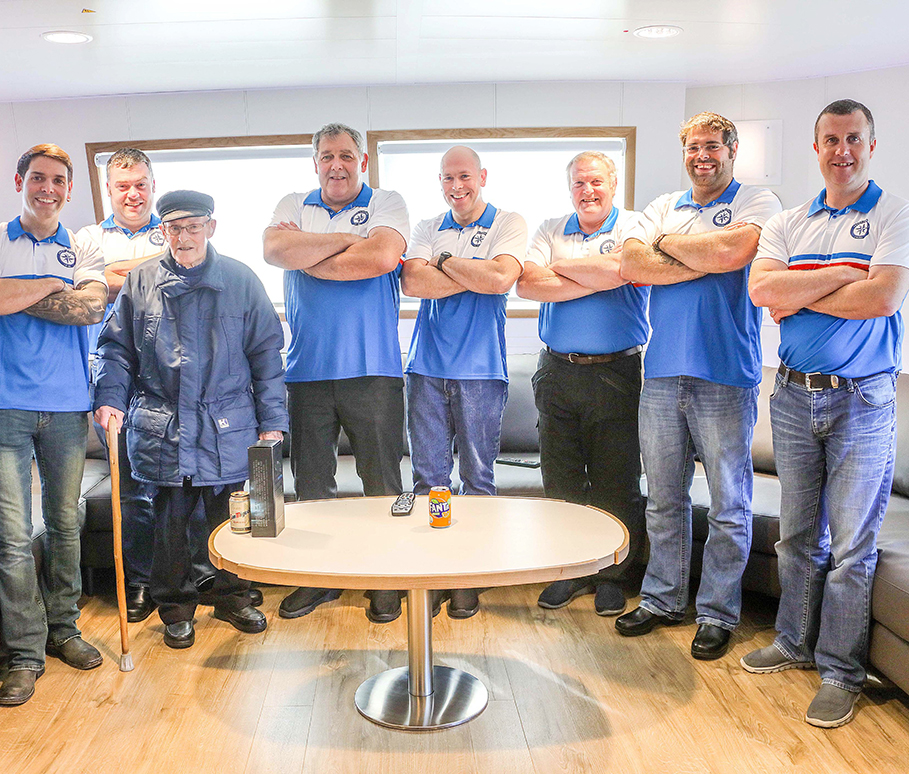 The new Adenia tackled some harsh weather on her passage from Astilleros Zamakona’s yard in Pasaia, first to Killybegs to pick up gear, and thence to Whalsay.

Skipper George Anderson, who is in partnership with his sons Stuart, Josie and Michael and fishing agents LHD, said that Adenia took the side-on bad weather, blowing to 30 knots on the first leg and 40 on the second, in her stride.

He was well pleased with her sea-keeping ability and the general quality of the ship, the first RSW tank ship, he believes, built by Zamakona since the Taits’ Ocean Venture and Ocean Crest some years ago.

Work on Adenia started at the Basque shipyard in February 2018. She should have been completed in July this year but a national steel shortage put the skids on the timetable and further delays with crane supply and completing the wiring meant she never got back on schedule.

Skipper Anderson said: “It took a while to get what we were wanting but she is good. She seems to be a fine sea boat. Very simple and easy to work and she is a bit more modern than our other boat.

“We lost two months early on in the building and we never caught that up. But she was not that late at all. In the last two weeks there was a lot to be done.”

The new boat cost about £23 million and is just under 70m long overall and at 15.6m beam is two metres wider than the old Adenia. The previous Adenia was sold to Norwegian owners.

Proceeds from that sale went into the new vessel and the Clydesdale Bank provided a “good” financial package for the rest of the balance.

“If the price of the fish bides up and the stocks bides as healthy as they are just now, we should not be just too long getting her on the right footing,” said Anderson.

“We are hoping for a good season. The price of the herring is up just now and mackerel is looking like a very good price for it.”

Anderson said that the deal with Zamakona was signed after a number of options had been considered including various yards in Norway and Denmark. The Norwegian yards were all trying to complete hulls from the same yard in Poland, which meant the Polish yard could not deliver on time, and the new Charisma, another Whalsay based pelagic trawler to be delivered later this year, pipped the Adenia to the available slot in Denmark, so the partners kept looking further afield.

They wanted a yard that could complete the whole job from laying the keel to finishing her off and that narrowed the options to Turkey and Spain. Going by the rule of nearest first, they went to Zamakona’s Bilbao yard and Pasaia.

The yard was evidently old but it had all the equipment and material needed in good order, better than some of the Norwegian yards, so the deal was signed shortly after in Aberdeen.

“They could build her and finish her and that was exactly what we were looking for,” said Anderson. “I am happy enough with her. She will see my boots off I doubt.”

The vessel was launched in July and she was handed over in August. She left Spain on 7 September and was in Killybegs two-and-a-half days later. Setting sail for Shetland on 11 September she arrived and at Symbister, Whalsay, on Friday 13th.

Adenia’s 12 crew were spooling trawl wire and loading other stores when we visited. Since then she has undergone fishing trials, with technicians from the yard and various suppliers on board to make sure everything was working right.

With everything in order, she has just begun her first herring trip before the mackerel begins at the start of November.

Fish quality is everything nowadays, especially where the Japanese buyers who pay tops are concerned.

“The quality and type of mackerel you are catching is what makes a difference to the price,” said Anderson.

With a refrigerated seawater system whose two 900kW chilling plants can take 1,200 tonnes of seawater from 12 degrees to minus 1.5 in four to six hours, specially designed pumping systems and improved trawl gear, that quality can be supplied like never before.

“Your boat is not so low in the water now so you can make a better passage with it – kinder on the fish,” said Anderson.

A set of 7,5m2 Tornado trawl doors were supplied by Vónin.

Adenia has been designed with a stern fish pumping system and while the old ship was retro-fitted with similar, the lessons learned and improvements from that system have been applied from the start.

Her winch package—trawl winches, net drums, tail-line winch and lifeline winch—came all from Rapp MacGregor while the cranes are from Karmoy.

The fish pump and fish handling system were provided by Seaquest in Ireland while the freezing plant and pump ashore is from MMC.

The vessel is powered by a Bergen 7,000hp main engine which normally powers everything while she is at sea and fishing. Two Yanmar auxiliary engines take care of landing power, though they can power systems at sea if need be. A harbour set provides power while she is berthed.

Extra manoeuvrability for coming alongside and fishing operations is provided by fore and aft 900kW Brunvoll thrusters.

Adenia will be fishing with all 12 crew on each trip. Skipper Ivor ‘Fred’ Polson will be taking turns at the wheel with Anderson, while Stuart Anderson also holds a skippers’ ticket and will take a turn at the helm when needed.

Another Anderson, Josie, is one of the Adenia’s three engineers along with Raymond Fraser and chief engineer Brian Laurenson, whose daughter was marrying on Friday, 20 September, another cause for celebration in Lerwick.

The crew can enjoy cabins of the quality that pelagic fishermen are treated to these days. There is also an onboard gym and a sauna for the crew’s enjoyment.

As typical of pelagic trawlers these days, the ship is very spaciously laid out whether that is the wheelhouse, wet and dry changing areas or the engine compartment.

Cook Michael Anderson is delighted with the layout of his galley which contains a steam cooker that can be linked to the internet for recipes and an induction hob as well as a gimbal-mounted frying pan.

The surfaces, he says, are much easier to clean than the stainless-steel fittings than on the previous ship. When not served out of the pot, meals can be left in a Bain Marie in the mess room, which has a table big enough for the whole crew, though there would be room for two tables.

Speaking of the impressive build, Luis Magro of Zamakona told The Skipper: “Building a new vessel required a high degree of cooperation between shipowner, designer and yard. George and the rest of his team have been approached the project in a very practical way and the process becomes smooth and easy going.

“ADENIA-SALTSHIP-ZAMAKONA worked in perfect harmony to provide George a state of the art pelagic trawler.”

The Skipper team would like to take the opportunity to wish George, Ruby, his family, and crew every success with the new Adenia. 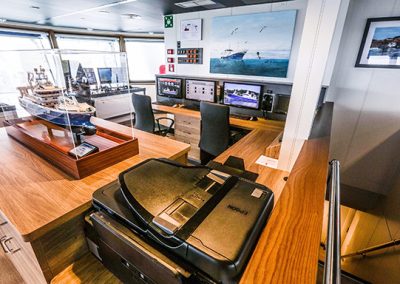 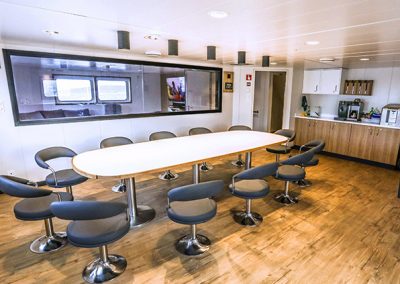 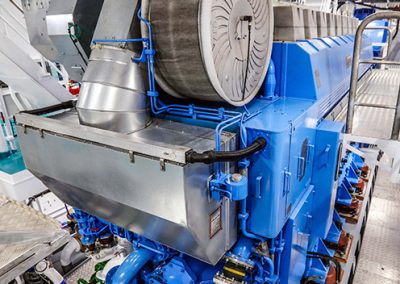 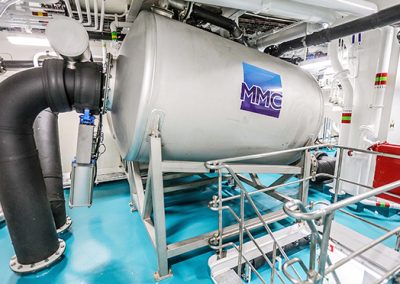 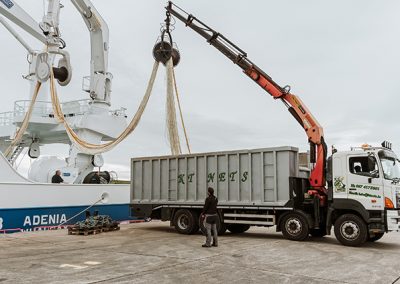 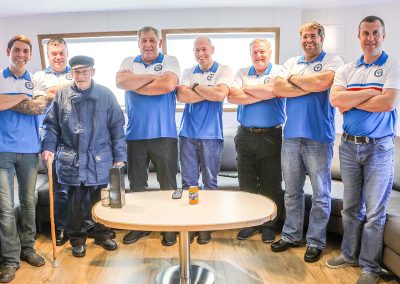