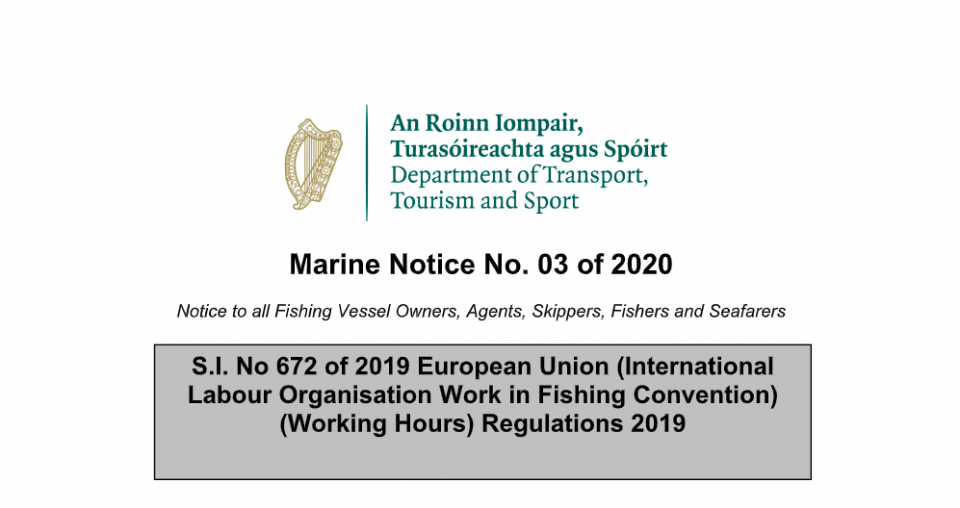 The  Work in  Fishing  Convention, 2007 (C188) was adopted at the  96th  session of the International Labour Conference in June 2007. It aims to ensure decent conditions of work in the fishing sector with regard to minimum requirements for work on board fishing vessels; conditions of service;  accommodation and food;  medical care and health protection;  and social security. The Convention entered into force on 16 November 2017 and, so far, 14 Member States of the ILO have ratified it.

The European Union (International Labour Organisation Work in Fishing Convention) (Working Hours) Regulations 2019, (S.I. No 672 of 2019) was signed into law on 19 December 2019 and gives effect to the provisions of Article 11 of the Annex to Council Directive 2017/159/EU.

The objective of the Regulations is to give effect to provisions of Article 11 of the Annex to Council Directive 2017/159/EU which relate to Hours of Work and Rest. They prescribe maximum hours of work and minimum hours of rest for workers on board sea-going fishing vessels, require records to be kept of their hours of work or rest and provide for enforcement measures.

The Regulations apply to sea fishing vessels which are registered in the State.

The European Communities (Workers on Board Sea-Going Fishing Vessels) (Organisation of Working Time) Regulations 2003 (S.I. No. 709 of 2003) no longer applies to those workers to which the European Union (International Labour Organisation Work in Fishing Convention) (Working Hours) Regulations 2019, (S.I. No 672 of 2019)  apply.

The Marine Survey Office is designated as the competent authority in the State for the purposes of the Regulations.

Article 11 of the Annex to Council Directive (EU) 2017/159 set specific limits on fishers’ hours of work and rest, which are as follows:

Subject to the limit of an average of 48 hours of work a week over a reference period not exceeding 12 months, the limits on hours of work and rest in respect of a worker on board a sea-going fishing vessel are as follows:

The master, or a person authorised by the master, shall maintain on board the fishing vessel a record of the daily hours of work or rest for every fisherman on board the vessel. Each record shall be completed monthly in arrears and shall be endorsed by the master (or a person authorised by the master), and by the relevant fisherman no later than 7 days after the last day of the calendar month to which the record relates. The relevant fisherman should be given a copy of the endorsed record. Each record should be retained for at least one year from the date of its making.

Please refer to Appendix 1 for a sample form which can be used to provide evidence of compliance with these Regulations.

In order to ensure compliance with these Regulations, a surveyor of ships, may do any of the following:

A direction may amongst other things, state the grounds upon which the direction is made and specify the action to be taken by the person on whom the direction is served and where appropriate, the period within which that action shall be taken.

A direction shall be complied with within such period as may be specified in the direction.

Marine Notices are issued purely for maritime safety and navigation reasons and should not be construed as conferring rights or granting permissions.