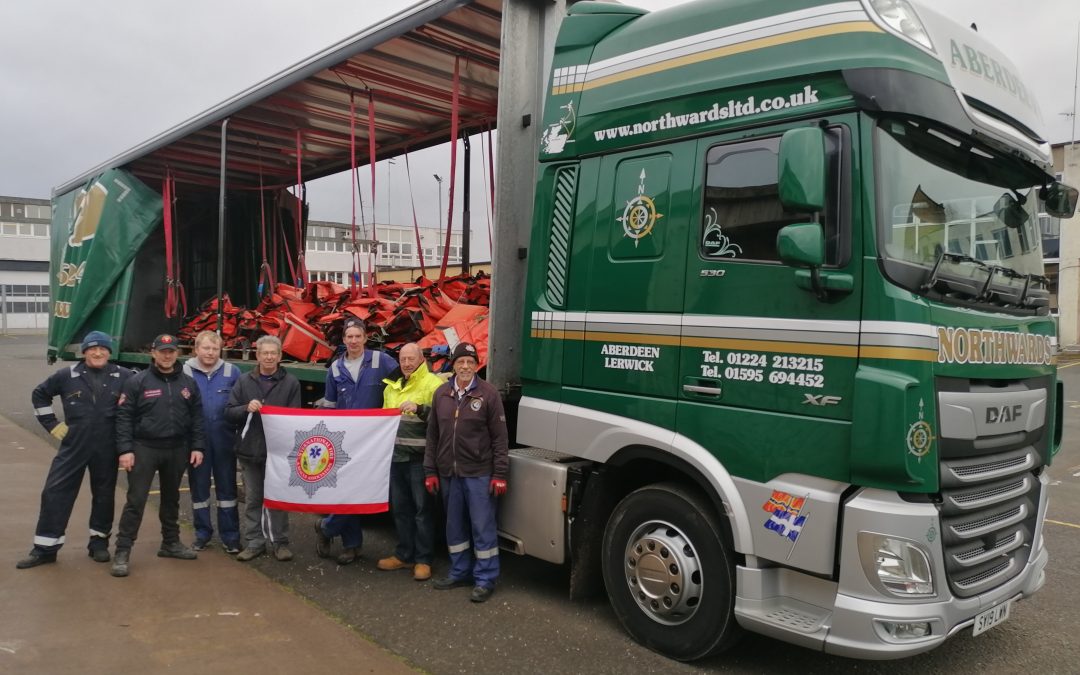 The gear has been donated by Lerwick Port Authority to Thornton, Fife, based International Fire and Rescue Association (IFRA), a charity founded in 2002 to assist services in countries where poverty, war or civil unrest affect emergency response.

Including around 100 metres of containment booms for deployment in water, it was delivered to IFRA free-of-charge by Lerwick-headquartered Scottish transport and distribution company, Northwards Ltd.

IFRA’s Director/Secretary, Gary Johnstone, said: “Donations of all sorts are very important to our activities and we are grateful to Lerwick Port Authority for sending the booms. Without donations of equipment, vehicles or financial support, the charity would not be able to carry out its aims. The equipment will help emergency services provide a response to pollution incidents, a capability many of them do not have.

“We are currently involved in supporting projects in Albania, Argentina, Ecuador, Mexico and Paraguay. The booms will more than likely be split up between a number of locations, but will definitely be sent overseas.”

This year, the charity received the Queen’s Award for Voluntary Service for the work it does worldwide

Stuart Wadley, the Port Authority’s HSEQ Manager, commented: “Donating the equipment is in line with our objective of recycling wherever possible from within harbour operations. Upgrading our spill response equipment to a fast deployment system has made the previous booms available for elsewhere. It’s great they will be put to good use, thanks to IFRA and Northwards.”

Since start-up, IFRA has provided assistance in 21 countries worldwide, including sending 98 vehicles and 59 containers of equipment and undertaking 69 training missions.

The upgrading of the Port Authority’s oil spill equipment involved replacing the booms with new and loading them onto purpose-built, quick deployment reels which can be mobilised to any area of the port.