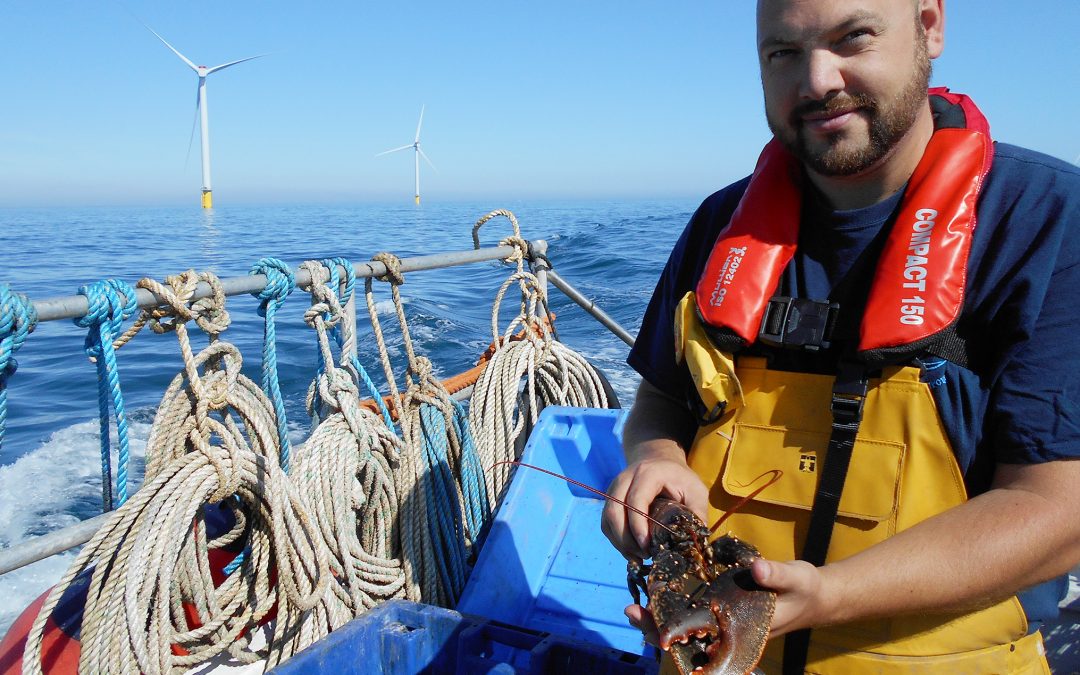 HFIG have learnt that through the strength of the organisation and forward-thinking of the fishers we can ensure a stronger fishery for the future via fair cooperation and collaboration with other marine industries.

The Holderness coast fishery is located on the north-east coast of England, approximately between Flamborough Head to the north and Spurn Point to the south. Traditionally a whitefish fishery, a fleet of trawlers would sail from the main port of Bridlington targeting species such as cod and haddock.

As stocks started to decline in the mid to late ‘80s the fleet started to diversify away from their traditional target species into targeting crustaceans. The modern fishery today, almost exclusively, targets the European lobster, brown crab, velvet swimming crab and the common whelk. Recently lauded the ‘Lobster Capital of Europe’, the fishery has developed into one of the largest potting fisheries in the UK.

Over recent years, Bridlington has become the largest port in Europe for landings of the European lobster, reaching a maximum of 457 tonnes landed in 2017. Since 2017, landings have reduced to 310 tonnes of lobsters landed due to national legislation protecting egg-bearing female lobsters being introduced in late 2017.

Whilst the Holderness fishery is a successful potting fishery, the fishers are faced with ever-growing offshore developments affecting where they can fish. The east coast of England has seen vast developments in offshore wind farms amongst other offshore agendas such as gas exploration, aggregate extraction, marine conservation zones and protected areas.

Liaising with these different developers and associated consultants can be difficult for individual fishers due to them being at sea during unsociable hours whereas most of the people leading these agendas operate a 9-5 work life.

In 2010, the fishery faced the proposal of the Westermost Rough offshore wind farm site; proposed to be located 6 km off the coastal town of Tunstall. Whilst by today’s standards, a relatively small wind farm – just 35 turbines, this proposed site was on one of the most productive grounds for the inshore lobster fisher.

Initial feelings within the fishery were not positive towards the installation with fears that access to and the productivity of the site would be destroyed as the development was constructed.

In response, the fishery came together to speak as one voice, forming the Holderness Fishing Industry Group (HFIG). They appointed a CEO who came from outside of the fishery with a marine biology and law background to liaise on their behalf. This allowed for discussion between the two industries to move towards developing a relationship where the two sides could co-exist. 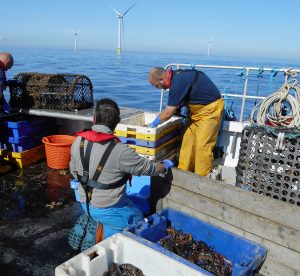 In 2013, HFIG purchased the research vessel, the R.V. Huntress

In 2013, HFIG purchased a research vessel, the R.V. Huntress, via a European grant and support from the offshore wind sector. The aim of the R.V. Huntress was to conduct research for the fishery to gather evidence and data when faced with similar issues, to ensure the fishers could show the importance and productivity of the fishery. The vessel was crewed with ex-fishermen and a fishing industry employed scientist to run the offshore research program.

HFIG have collaborated with Ørtsed, the Westermost Rough wind farm developer, to conduct the monitoring program for the site – a program ordinarily conducted by a marine consultancy. The use of a fishing industry-owned research vessel allowed both industries to take charge of the research in a new approach not seen before for this kind of research.

HFIG finished the 6-year monitoring program in late 2019 and the overall results will be published soon (http://www.hfig.org.uk/). Alongside the monitoring program, working as the onboard scientist, I was conducting further research into the effects of the development on the lobster and crab stocks, studying for a PhD at the University of Hull.

I observed that during the construction phase of the wind farm there were positive effects on the size and catch rates of lobsters in the site (https://doi.org/10.1093/icesjms/fsy006) and during the subsequent operational phase (2015-2017) the resident shellfish populations started to reflect those observed prior to the development of the site.

The research conducted by HFIG in collaboration with Ørsted has answered an important question in relation to offshore wind farm developments, increasing the scientific understanding of their effects whilst working towards the co-existence of the two industries. 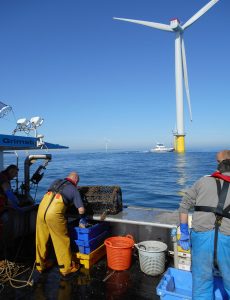 Acceptance of thinking outside of the box by the offshore developers and an impetus within the fishing industry to forge ahead with their own agenda, needing to understand the factors causing their concerns is essential in this relationship.

Jamie Robertson, the current managing director of HFIG states “the formation of HFIG has allowed the fishery to be stronger whilst bridging the gap between fishers, scientists and offshore developers ensuring the future viability of our thriving industry”.

The collaborative nature with Ørsted, other developers, and European grants has allowed a research facility and lobster hatchery to be built in Bridlington where further research programs will take place ensuring the future sustainability of a thriving fishing industry.

Courtney French, UK Commercial Fisheries Manager at Ørsted stated “having HFIG to represent the voice of a unified group of fishermen has proved to be invaluable for both industries.

“Ørsted are committed to working with HFIG and the fishermen they represent to better understand how the two industries can work together and improve coexistence. We have and will continue to work with HFIG to determine the impacts associated with offshore wind on the fishing industry”.

The Holderness coast still faces many conflicts over the use of the seabed, currently, there are seven different developments ongoing that require fishers to move from traditional grounds. HFIG represents their membership in these negotiations and with regards to management and representation of the fishery at a regional and national level.

HFIG have learnt that through the strength of the organisation and forward-thinking of the fishers we can ensure a stronger fishery for the future via fair cooperation and collaboration with other marine industries.

Further information on the Holderness Fishing Industry Group (HFIG) can be found on their website http://www.hfig.org.uk/