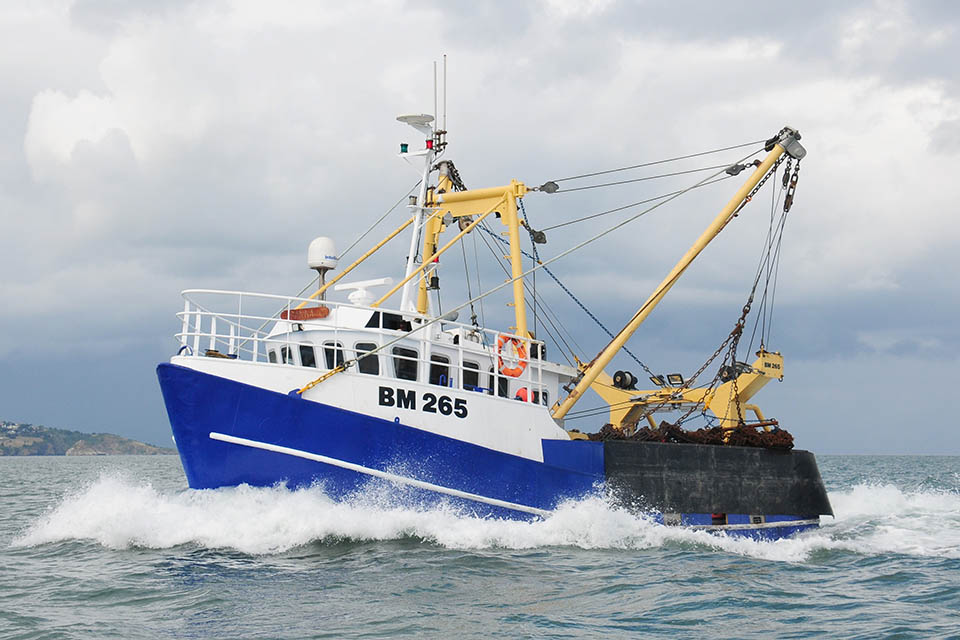 Early in the morning on 21 November 2020, the scallop dredger Joanna C capsized south of Newhaven, England; only one of the three crew survived.

Joanna C’s crew was hauling the gear when they noticed that the starboard dredge bar had become snagged on a line of whelk pots. The snag caused a heel to starboard from which the vessel could not recover, and it capsized rapidly.

The MAIB’s investigation found that through-life modifications, culminating in extensive alterations in 2019, had reduced Joanna C’s previously good stability to a state where it had very low reserves of positive stability and increased vulnerability to capsize. The detrimental effect of the modifications was unknown to the crew and regulator alike because, although a stability assessment had begun after the 2019 modifications, the analysis was never completed, and the vessel was free to continue operation.

During the capsize Joanna C’s mate was thrown into the water and the skipper later managed to escape as the inverted vessel sank; however, the deckhand remained trapped inside. The vessel’s liferaft did not inflate during the accident because the uninflated liferaft had insufficient buoyancy to initiate the inflation mechanism. The absence of a liferaft adversely affected the survivability of the crew in the sea after the vessel sank.

A safety recommendation (2022/124) has been made to the Maritime and Coastguard Agency to ensure that stability requirements for small fishing vessels are applied as intended and that, where stability checks are required, fishing operations should be suspended until a vessel has been satisfactorily assessed.

During the investigation a safety recommendation (2021/116) was made to the British Standards Institution to propose the introduction of a minimum buoyancy requirement for liferafts certified by the International Organization for Standardization. The International Organization for Standardization’s technical committee subsequently agreed to include a buoyancy requirement in its revised liferaft standard.

In parallel with our report a safety flyer has been released to the fishing industry highlighting the need to consider the impact that modifications could have to the vessel’s stability, and the importance of checking where ‘float free’ arrangements are in place, that the buoyancy of the liferaft will be sufficient to overcome the inflation mechanism.

“The MAIB’s investigation into the loss of Joanna C set out to answer two key questions: why did it capsize, and why did only one of the three crew survive? Today, we are publishing the report that answers both these questions. Joanna C capsized because it had insufficient reserves of stability to recover from the heel created when the fishing gear became snagged.

This happened because of modifications to the vessel that had severely eroded its stability characteristics, and this went undetected.Of equal importance today, I want to highlight the findings of our investigation regarding Joanna C’s liferaft; this issue reaches beyond the fishing industry to any vessel carrying a ‘non-SOLAS’ liferaft. Lifesaving appliances are just that – for saving life, so it is vital that such equipment will function correctly in the event of an emergency. Unfortunately, Joanna C’s ‘float-free’ liferaft arrangements did not work as expected. Although the liferaft was released from its cradle as the vessel sank, it did not come to the surface and inflate.

This significantly impacted the chances of survival for the two crew in the water, only one of whom survived. The MAIB’s investigation found that the uninflated liferaft had insufficient buoyancy to trigger the gas inflation system, leaving it suspended mid-water still attached to the sunken vessel (see headline image). Furthermore, the liferaft had not been manufactured to meet any specific standard, although this was acceptable for a small fishing vessel at the time. Prior to publication of today’s report, an immediate MAIB recommendation was made to amend the International Standard Organisation’s standard for non-SOLAS liferafts (known as ISO-9650) to ensure they have sufficient buoyancy in the uninflated state to activate the inflation mechanism, where ‘float-free’ arrangements are in place.

The safety message is that it is vital to ensure that lifesaving appliances will work as expected. Where ‘float-free’ arrangements are in place, the liferaft must have sufficient buoyancy to trigger the inflation mechanism once it has been released from the cradle as the vessel sinks.”