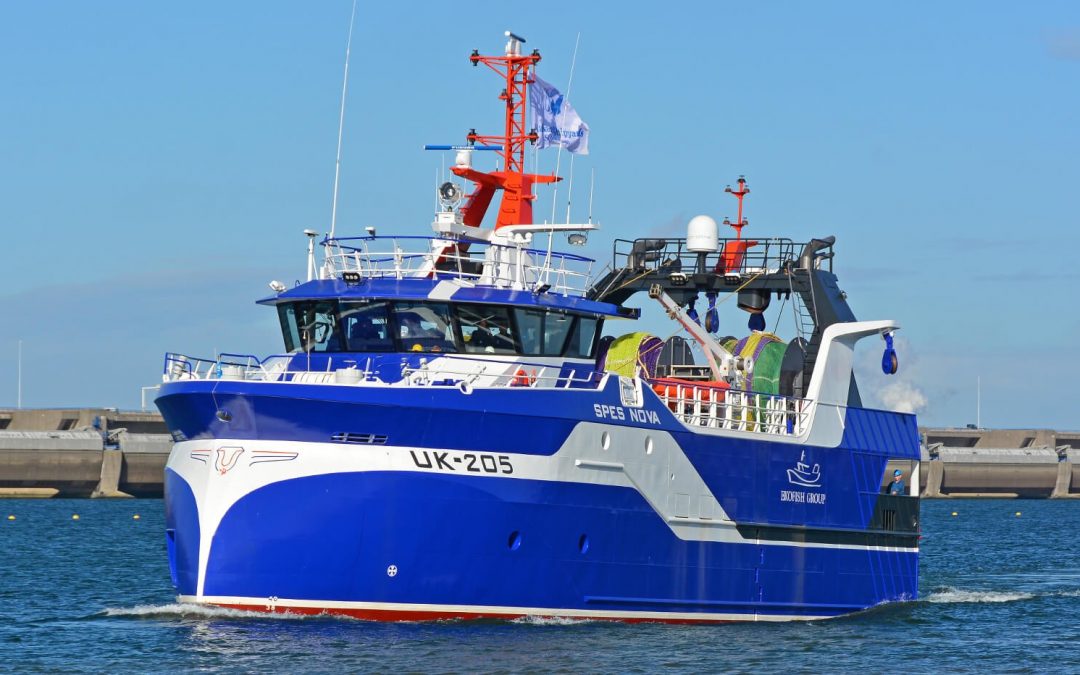 NUTFA has been receiving reports of the increasing number of fly shooters operating initially in the eastern Channel but now fishing as far as western waters for a couple of years now.

From initial reports of relatively small numbers of these vessels taking significant quantities of Bass, suddenly we seem to have a vast fleet [75] of high powered fly shooters working our waters, everywhere from the eastern Channel through to western waters, all licenced by the MMO, despite the fact that they admit to not having complete catch records for this method in these waters, reliant instead on member state data, including that from France who have been penalized in the past for failures to provide accurate information in this respect.

Representatives of the fly shooters from the UK, Netherlands, Belgium and France have apparently made an agreement among themselves to limit the 75 massive vessels [the UK ones are all flag ships owned by Dutch interests] to only using 3200 metres of 55mm diameter seine ropes with a weight of 2kg/metre and with a minimum mesh size of 80mm.

They have limited their effort to 8 days at sea per 14 day block and readers in the Channel will be relieved to hear that the Dutch and Belgian vessels, all 30 of them will keep outside the 9 mile line in VIID but outside the 12 mile off Normandy. Quite why these rules don’t also apply to the 17 Dutch owned flag ships registered in the UK or to the 28 French vessels is questionable. [and according to French inshore fishermen, it is a waste of time going to sea after these boats have been fishing locally as there is nothing left {sounds like the pulse debacle all over again}]

DEFRA have only heard about this agreement recently and are apparently trying to understand more about it and its potential impacts [I suggest they ask any British Channel fisherman], who was involved, how it will be enforced and how it might work with management measures elsewhere.

Taking a step back, it now appears that the MMO are keen to licence every Tom, Dick and Harry fly shooter [or Johann, Pierre and Gaston] despite not having complete track records. UK fisheries management seems to being made up by foreign interests in our own waters and our own government until recently have been unaware of it. The promise by Johnson of “world leading fisheries management” seems to be about as trustworthy as all the previous promises regarding UK fisheries and all the while, OUR resources are being plundered by a virtually uncontrolled fleet of foreign boats, to the detriment of our own fleet, big and small.

As a postscript to this, the MMO tell us that they have licenced all 75 vessels but are reviewing their impact before deciding on any longer term access arrangements. What could possibly go wrong with that approach?

But again, we can be reassured here because the Dutch representative, Pim Visser has said that “the purpose of this agreement is to ensure a sustainable future for all fishermen and their families”. Try telling that to the UK’s inshore fleet fishing the Channel, and their families.

NUTFA had raised the fly shooter issue with DEFRA many weeks ago but have yet to receive any substantive response.

In the letter to DEFRA we said “we have concerns regarding the clear increase in the presence of very large and powerful fly shooters that are being seen increasingly in our western waters. We have received an increasing number of calls over the last couple of years with regard to the fishing effort and impacts of these vessels in the eastern Channel, especially with regard to non quota stocks. It does appear from our perspective that their presence in western waters is something of the marine equivalent of a land grab and this has not been helped by the reported lack of data on the number of vessels using this method of fishing and their catches, either historically or presently.

We are apparently reliant on what data the EU holds and this is certainly not the firm foundation that should be necessary to grant access to this element of the EU fleet. I am aware that the French especially have failed year on year to provide detailed catch data to the EU and this does little to give any confidence in the information on which access is being granted.

In a written answer in this respect, Fisheries Minister Ms Prentis said: “The MMO uses data published by the EU Commission to estimate EU landings from UK waters as part of the annual MMO EEZA report.  The MMO does not hold comprehensive, historical records of activities by EU vessels, as these are held by their flag state.”

So my points in this respect are firstly that the UK should not underestimate the fishing power of these vessels. Their gear and fishing method covers a much larger swept area than other forms of mobile gear and secondly their main target species such as cuttlefish, red mullet, bass etc are of vital importance to our sector.

Finally, the lack of sound data should preclude the granting of any right of access to these vessels, not only on the basis of the above but also that having spoken to a number of SW fishermen who have traditionally fished these waters, the presence of this modern fleet of fly shooters is something new to them and therefore has no historical basis for being given access and not least in light of the Minister’s comment above that “The MMO does not hold comprehensive, historical records of activities by EU vessels, as these are held by their flag state”.”

We would like to give DEFRA and the MMO the benefit of the doubt and we await a robust response to the longer term licencing of these vessels but based on the abject failure of government to stand up to European interests under the Brexit arrangements, the surrender of the 6-12 mile zone and the apparent enthusiasm shown by the MMO to licence an armada of EU vessels in our waters, we are not holding our breath.

The new Fisheries Act gives the UK the power to provide or deny access to our waters based on the social and economic benefits of individual vessel operations to our own coastal communities.

If anyone can provide evidence of any such benefits that these powerful foreign owned vessels deliver then we would be pleased to hear from them.

NUTFA campaigned hard to get pulse fishing banned in UK waters but was undermined by the NFFO who instead promoted a continuation based on specific fishing areas.

It now appears that the UK representative on the group promoting this massive fleet is Dutchman Andries de Boer, one of two Dutch Directors of the NFFO. All we need now is for some academic to turn up to tell us that the method is fine despite the first hand observations of many inshore fishermen to the contrary, in the same way as happened with the pulse lobby to complete the similarity.

But this article is not about partisan fishing politics, the subject and impacts are far too serious for that.

The under ten fleet in the UK has been hanging on by its fingertips for years, increasingly reliant on fewer and fewer species, hemmed in by everyone from the EU fleet parked on our 6 mile line to increased calls for inshore MPA’s, licences capped, promises of a fair allocation of quota broken time and again, a draconian licencing regime and yet more restrictions on those few species that we are allowed to catch.

Yet a fleet of hugely impactful, foreign owned vessels that provide next to no social, economic or environmental benefits to our coastal communities are licenced to fish in our waters whilst the powers that be decide on longer term access. Shutting the door after the horse has bolted comes to mind.

Pulse fishing crept up and bit us in the backside and was only initially exposed by the witness of many of our inshore guys. It seems that fly shooting is following a similar course.

From reports coming in from both sides of the Channel, if DEFRA / MMO grant longer term licences to this fleet then it will certainly spell the end for the under ten sector in that area as we know it.