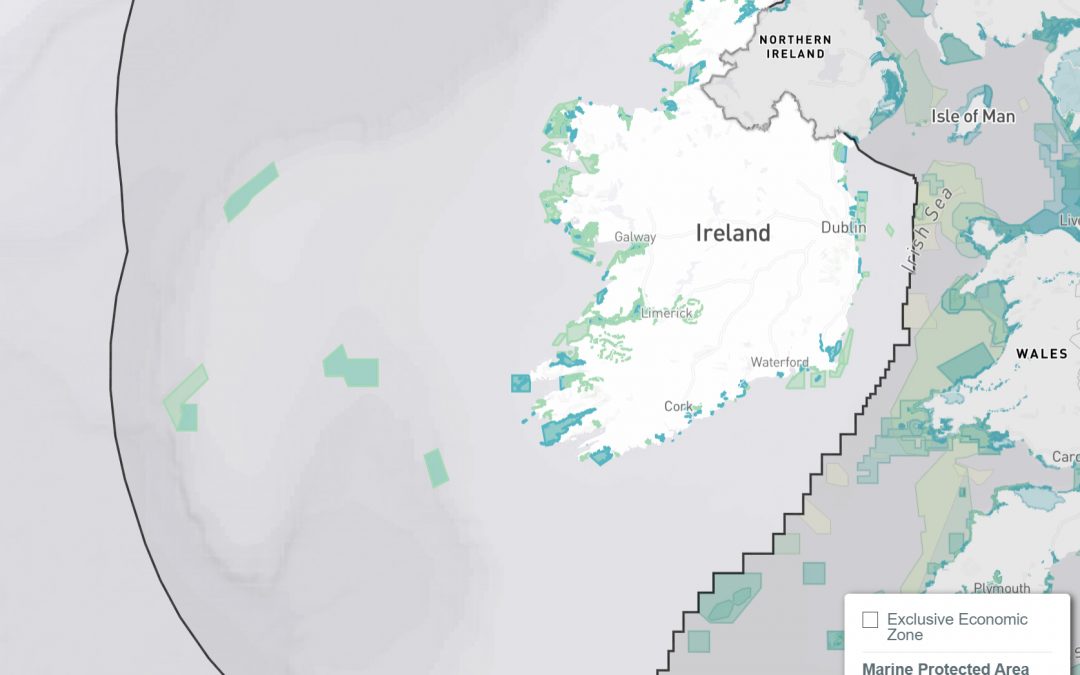 Ireland’s ambition to protect 30% of its maritime area by 2030 took a major step forward today with news of newly protected marine sites and Government approval of the General Scheme of the Marine Protected Areas Bill.

Minister of State for Heritage and Electoral Reform, Malcolm Noonan TD, made the announcement today before travelling to the UN Biodiversity Conference, COP15, in Montréal, Canada, where the Irish delegation is working to help negotiate a new set of global goals for nature conservation and biodiversity.

“This is fantastic and much-anticipated news for everyone who cares about our oceans, our coastline and our treasured island environment,” said Minister Noonan. “Ireland’s marine environment is rich in biodiversity, providing huge benefits for our economy, our health and well-being, for coastal communities, food provision and climate adaptation. It also offers enormous renewable energy potential for our country and our people, which this Government is committed to harnessing.

“We started from a low base of 2.3% marine protection in 2020, but since I became Minister we have more than tripled the overall size of protected areas in the sea to 8.3%, and are on track to reach 10% by the middle of next year. This, plus progress on the new MPA Bill, puts Ireland in an excellent position to deliver on its ambition for protected areas across 30% of our maritime area – that’s twice the size of our landmass – by 2030.

“My announcement today of Government approval for the General Scheme of stand-alone Marine Protected Areas legislation, as well as new sites protected for biodiversity conservation at sea under the European Nature Directives, shows that by working together we can address the pressures we put on the ocean and its natural resources, and build a better ocean future for the benefit of people and nature, now and into the future.”

The MPA Bill is designed to deliver a modern framework for designating and effectively managing protected areas in our seas and ocean, one that can help to address the current biodiversity and climate crises. Work on the Bill has been informed by a comprehensive expert group report on MPAs published in 2021, and the outcomes of stakeholder and public participation and consultation. The scientific, technical and participatory approaches set out in the forthcoming MPA Bill are intended to ensure that practical and effective area-based conservation action and management measures will be taken to protect our highly valued marine biodiversity and other ecosystem features. This will contribute to Ireland achieving very high standards of environmental protection and sustainable use that are required under the EU Marine Strategy Framework Directive.

Meanwhile, two new Special Areas of Conservation have been selected under the EU Habitats Directive, totalling a combined 3 million hectares: one in an area off the northwest coast and another off the south. Both were selected due to the presence of the internationally-protected deep-water reef habitat, a unique ecosystem that supports a wide range of marine species.

Work is also well advanced on the selection of a number of internationally important sites for birds – Special Protection Areas, under the EU Birds Directive. The formal notification process is expected to commence in the coming months and will soon bring Ireland’s total marine areas protected under the European Nature Directives over the 10% target. Efforts are being prioritised along the country’s east coast, in the Irish Sea, while further work is underway on the southern and western coasts.

“Today’s announcement at the UN Convention on Biological Diversity COP15 demonstrates Ireland’s global and national commitment to having clean, healthy, biologically diverse and sustainably used seas and oceans. As an island nation, our seas and our ocean are absolutely crucial for Ireland. Our maritime area is seven times the size of our landmass, and it supports our economy, inward and outward trade, our energy supply and communications systems – as well as our climate, our environment, our cultural traditions and heritage, our health and well-being. This milestone in bringing Marine Protected Areas legislation forward supports the achievement of this Government’s ambitions for the protection of our precious marine environment, while ensuring the sustainable use of its resources including supporting Ireland’s offshore renewable energy ambitions.”