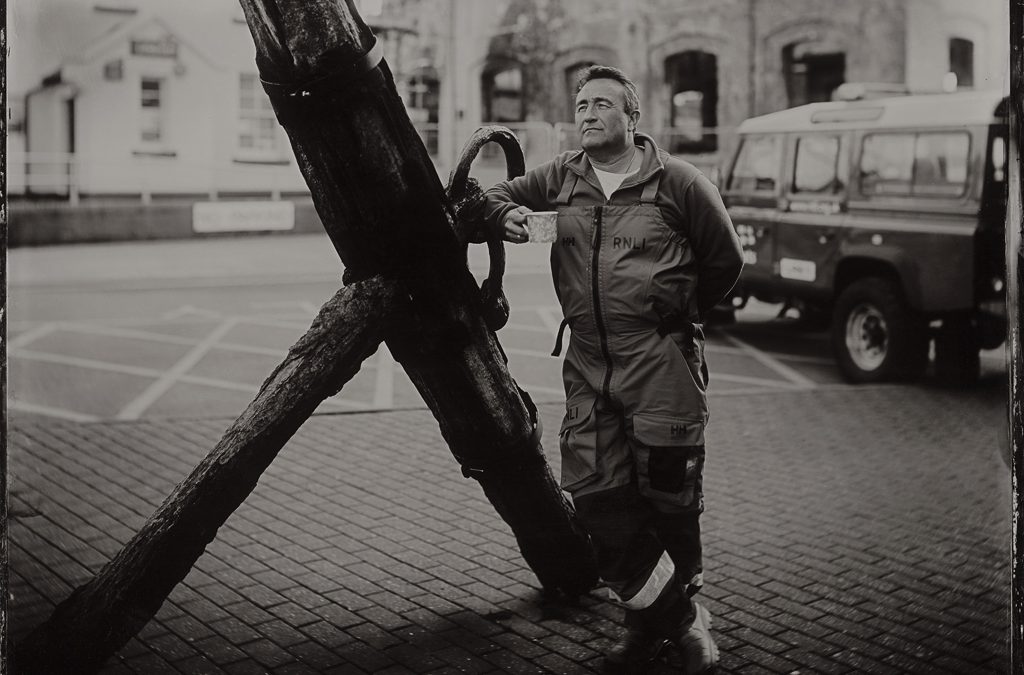 Behind every lifeboat coxswain, there’s a tale of how and why they first joined the RNLI.

For some, it will be family tradition – following in the footsteps of a father or beloved uncle.

For Holyhead coxswain Tony Price, it’s partly the case – but the full reason is a somewhat more dramatic story, and one he tells as a cautionary tale, providing true evidence that even a confident sailor can be at the mercy of the sea.

It was 1993, and the story is told by Tony with jawdropping honesty. But first we must set the scene, and provide a bit of history.

Tony had been spending time on the water since he was 6 years old. His father John, who himself was a lifeboatman until he was called up for National Service, made his son some lobster pots, and the young Tony began fishing on the inside of Holyhead breakwater, from his father’s five horse power, ex-MOD vessel.

Tony says he and his father would travel all around Holyhead bay, and out to the Skerries together. As a boy, one of Tony’s main jobs was, in his own words, ‘bailing the boat out – basically making sure we didn’t sink. There’d be no sign of any radio, lifejackets, nothing like that – it was a completely different time.’

By age 9, young Tony was sailing his father’s next boat, the ‘Duke of Montrose’ alone, with his lobster pots, watched by his father from his allotment on the shore.

‘I was always told to stick to the inner harbour so he could keep an eye on me,’ he remembers, ‘but I was totally alone on the boat. Can you imagine that happening now?!’

At the age of 12, Tony joined the sea cadets, and then went on to do some fishing with his father on a 26-foot fishing vessel after his dad was made redundant from his job in the marine yard.

“Fathers and sons working together – that was the thing then; and I was inspired to work on the sea by both my father and my uncle Dick – but I always wanted to go further; to go round to Carmel Head towards Amlwch, and round to Caernarfon Bay. And I would do that alone – again, very different times. I did that for a number of years, quite happily.

“I was making a living from it, getting complacent. By then I was married, three children had come along, and we just carried on, feast to the famine; some weeks were good and others we didn’t have much.

“I had an opportunity then, in 1993, to take the Lochin, a 33ft vessel, out for the local fish factory, and we used to deliver crabs and fish. With hindsight, knowing what I know, that boat was too big for me to take out on my own. But I’d said yes to taking a fishing party out one day. The weather was blowing a south-west near-gale, and there was a 32ft spring tide. There were about four vessels that went out, and I had nine anglers with me on mine.

“It’s a wonderful thing, Captain Hindsight, but I didn’t know the boat well enough really; her systems, or the weight of her, or anything like that. I tucked myself under Holyhead Mountain to shelter from the weather. I dropped the anchor, we were fishing quite happily, and everyone was enjoying it. We then decided to move, and I went to lift the anchor.”

And that was when things for Tony started to go seriously wrong.

“Unbeknown to me, there was a pressure relief valve on the winch itself; that was one of the mistakes I made. I didn’t enquire enough about that, and the other mistake was I didn’t have another crewman with me. I was trying to do it all on my own – a very dangerous thing to do.’

“As I was hauling the anchor, with this offshore breeze, and the tide running like a good ‘un, the pressure relief valve failed on the winch, and the next thing – within a moment, like a flick of a switch, I was caught in the bite of the anchor rope.

“I had a pair of yellow oilskins on, which of course were soaking wet, and I was so lucky that the rope loop came up my entire body, and not just up one leg – because if it had gone up one leg, I’d have lost the leg; but fortunately it went up my whole body.”

It might seem strange to be using the word ‘fortunately’ in such a scenario, especially when Tony goes on to say:

“It crushed me around my waist as I was trying to hang on, and as this crushing motion – and bear in mind the boat would have weighed around 25 tonnes – plus the tide, plus the weather – there was a lot of load on my little frame at that point – I knew I was going to get pulled over the side of the boat; I just knew it was going to happen, and I couldn’t stop it.”

He pauses briefly to recall the moment.

“So I called out to one of these chaps who was on the boat: ‘Pass me a knife! Pass me a knife!’ I wasn’t ready for any of this; it was all happening in a split second.

“The man just happened to have a small knife pack with him, and passed me a knife just as I was torn over the side of the boat. As I hit the water, and went under, somehow I managed to cut the rope, and I was released.

“As I came to the surface, I could see the boat that I had been on was about 200 yards away from where I was, and, you know, I was in shock, and thinking that I’d managed to get away with it, and that’s that.”

“Lucky for me, one of the party on board was a charter fisherman from Grimbsy, and he knew how to drive a boat, and thank God he did. He came along with my boat, and fished me out of the water. So I got back in the boat, drenched from head to toe, and I said to the lads, ‘listen, that’s the end of the day boys, I’m really sorry but I’m not feeling too great now.”

It seems a little incredible that, having just had a near death experience, Tony was apologising to his companions, but, as he says, he was still in shock, and not yet fully aware of the effect the experience had on him. But that soon caught up.

“I carried on, took the others back to Holyhead, unloaded them, jumped into my Land Rover, which was parked at the fish dock, and went home. I took off all my wet clothes, got into the bath, and that’s when I went into shock, because I had internal bleeding from the crushing motion that had happened – so I ended up in hospital being treated for that. I also had a nasty gash on the inside of my arm where the rope had burnt me.”

In the aftermath of the incident, Tony had time to fully process what had happened to him, and that was when the lightbulb moment came.

“I just thought long and hard while I was recovering, wondering lots of things. How would I have been rescued? Who would have come for me? What would I have known? My family wouldn’t have known anything; I didn’t have any pension, any back-up. It was a life-changing moment for me,” he says, simply.

For a man who’s known to be jovial and enthusiastic, his quiet reflective words make the story all the more impactive.

In Tony’s mind, there was an obvious solution to how he was feeling, and the overwhelming desire to do some good to repay the good fortune that had handed on him that day:

“I went, in June 1993, to see Graham Drinkwater, the coxswain at the time, in the lifeboat station one Sunday morning, and I asked could I please join the crew? And Graham said, in his own quiet way, ‘just keep coming down to the station, Tony.

“I didn’t know a soul at the station really, apart from someone I’d known at the sea cadets, Craig Stalman, who’s just completed 30 years with the crew and is one of our duty coxswains – and I knew one of our now DLAs (deputy launching authorities) Iwan to say hello to, but that was it, so it was a completely new thing. It was quite daunting to walk into the station and do that. So I totally understand how it is for these new ones coming through now.

“I did about 6 months of calls, and then in March 1994 we had a climber stuck on the cliffs on North Stack. I went out in the Tyne Class to that, in very poor conditions – and the following day, I was made official and given my paperwork.”

That was only the beginning of a fulfilling life at sea for Tony.

“Since then I’ve gone on to do all sorts of things involving the boats, I’ve been the bosun of the Holyhead Sailing Club for 8 years, and I’ve worked in Holyhead Marina. I’ve always owned my own boats, and done charter fishing and a little bit of lobster fishing. I’ve worked all over Europe, all over the UK, on vessels up to 30 metres in length.

“I feel privileged to have worked offshore too during the construction of the windfarm industry; that was quite something. But it was life events that day in 1993 that changed it all for me. At the time I thought I was too clever to have anything like that happen to me – and I was very wrong.”

Those events still have an impact today on how Tony oversees the station and crew, and he’s never forgotten how it all began for him.

“Whenever I’m tough on our new crew, and anyone thinks maybe I’m a bit too serious about it all at times – it’s because I’ve been in that position, in trouble, and I know that with the snap of fingers it can all change; I was in the sea and I thought that was the end of me. It’s only because of a knife and a lot of luck that I’m still here.”

Powerful words, but all the more poignant when you consider where Tony is now.

“Here we are, almost 27 years on. I became second coxswain in 2001 when Graham Drinkwater retired. I did the first call out ever on our current, Severn-class all-weather lifeboat, the Christopher Pearce in 2003, and I’m now the coxswain. I’m also now a master mariner on paper. I like to run a tight ship and keep well ahead with the training, but I hope I keep it as fun as I can for everybody.”

It’s all about the future now for Tony, in an organisation he’s seen change immensely over the past three decades.

“My priority these days is to nurture and bring on the crew we have; all the men and women who are just starting out, because they are the future of the RNLI. I see myself as a custodian here at the station – we all do it for a particular point in time, and during my time here I want to see the crew flourish, and be the best they can be.”

Tony ends by thinking about his parents.

“I was lucky enough that my mother was alive long enough to see me become the coxswain. My dad never did, although of course he saw me progress and take on many things as a crewman. As well as thinking about all those coming up now, it’s important to think about those who came before us. In these uncertain times we’re living in now, it’s all about family and the people we care about, at the end of the day.”