Forgotten But Not Gone! 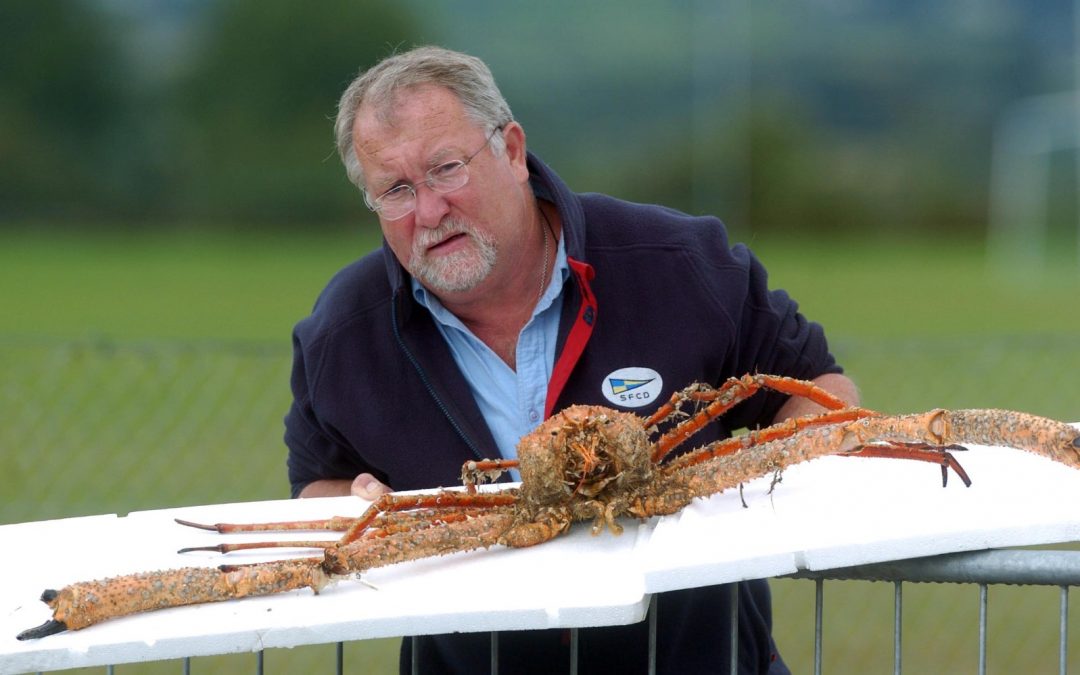 AN independent economic study on how Irish waters are fished and by which member states has never been more urgent at a time when the Irish industry is being squeezed almost out of existence, Dr Kevin Flannery says.

Flannery, well known rare fish expert, former fisheries officer, chair of the FLAG South-West and founder of Mara Beo aquarium in Dingle, Co Kerry, says the true economic value of fish taken by each country off the Irish coast must be documented in detail.

However, he emphasises the study has to be independent – conducted by a team of academics from a reputable university – if it is to have any impact and influence at a wider level.

“Overfishing is a term used so glibly now without actual qualification, and yet the perception at times is that Irish vessels are the main culprits here,”he says.

“We know bits of it have been accepted by Government, such as the tie-up scheme and the support scheme for the inshore fisheries sector announced by Minister for Marine Charlie McConalogue in mid January,”he says.

“It is that the Government just wants to go ahead with decommissioning 60 boats  -as in 60 businesses – so it will have fewer people to deal with?,”he asks.

“ It is  concerned about, and has it any focus, on elements of the task force report addressing a positive future for the industry?”Flannery added.

Asked to comment, a spokesman for Minister for Marine Charlie McConalogue said that the Cabinet had “noted” the report late last  year.

Each scheme recommended by the task force report has to be passed by the Department of Public Expenditure and Reform, and any other relevant departments, the spokesman said.

Several more schemes related to the recommendations were “in the pipeline”, the spokesman said as The Skipper went to press.

Tax details for the vessel decommissioning scheme were still being worked through late last month by officials from the departments of finance, public expenditure and reform, and agriculture, food and marine, he said.

Flannery stressed there was an urgency to the recommendations as Ireland has just two years to spend the €920.4 million in Brexit Adjustment Reserve (BAR) funding approved by Brussels.

Ireland is the biggest beneficiary of the BAR, which amounts to 5.4 billion euro in total. Ireland is also the first member state to receive its pre-financing.

The EU said last December that the funding will help Ireland’s economy in mitigating the impact of Brexit, through support to regions and economic sectors, including job creation and protection, such as short-time work schemes, re-skilling, and training.

Commissioner for Cohesion and Reforms Elisa Ferreira said t hat “Brexit has had a negative impact on many people’s lives” and “within the EU, it is the people in Ireland who feel it the most”. T

“The EU’s Brexit Adjustment Reserve stands for solidarity with those most affected. In moving forward, we don’t want to leave anyone behind. The funding that Ireland will receive will contribute to improve living standards, support economic growth in the country and mitigate the negative impacts in local communities,”she said.

Mr McConalogue’s spokesman confirmed that the funding must be spent within two yearse, and said that there was no figure available as yet for how much would be allocated to the marine sector from Ireland’s total sum.

Flannery is also concerned about the government’s commitment to burden sharing in the wake of an unhappy Brexit deal.

He  has undertaken his own study on the quotas allocated to other EU member states, and Norway, in Irish waters.

“Take the pelagic quotas in Irish waters – all the mackerel , horse mackerel and blue whiting  quotas held by Estonia , Lithuania, Latvia , Germany , France , England , and of course the Netherlands, are  under the control of a small number of  private Dutch factory ship companies,”he says.

“One cannot imagine the startled faces of the people of Lithuania,  if the now British- required economic link was attached to their registered pelagic factory vessel – and one  the world’s largest vessels – and the  Margiris had to offload its catch 70% of the time in Lithuania, its country of registration,”he points out.

“Next up,  the country with the biggest quota of fish off Ireland is France,”he says.

“The fact of the matter now is that 90% of all its hake and monk quota is now landed into Spain , Castletownbere and Dingle by its fleet of Spanish- owned but French- registered gill netters and longliners,”Flannery says.

“The same is true of most of the French quota of fish in Irish waters, as the percentage of “true” French vessels now operating in Irish waters is down to two or three vessels working west of the nine degrees,”he says..

“The dramatic increase in the number of over 15 metre-long vessels registered in Bayonne [in the Basque country of south-west France] over the past few years shows the true sell off of trawlers, and quota to Spain ,”he says.

“None of these trawlers ever go near Bayonne, and the Dutch have now started the same in the English Channel ports,”he says.

“Next up, you have Germany, and the Spanish with their monk quotas off the north-west coast, “he continues, referring to last year’s incident involving the German-registered Spanish-owned gillnetter Persorsa Dos which was involved in a confrontation 30 miles west of Shetland last June.

The Persorsa Dos was accused of attempting to foul the propeller of local Scottish trawler, Alison Kay.  Last July, the Pesorsa Dos was detained by the  Naval Service ship LÉ William Butler Yeats for alleged infringes of EU to fishing regulations in Irish waters around 250 miles off Malin Head, Donegal.

“And so on it goes , the French , German and other ,governments  don’t seem to mind, as the vessels ‘ registration and  these  quotas are still technically French or German ,”he says.

“So what they have , they hold,  as again,  its technically French and GDR boats catching their quotas  – yet it is of no economic importance or benefit to the coastal communities that built up and survived on these fish quotas “he says.

“So are the British right, in that should there be a review and request for looking at the possible introduction of an “economic link “ to fish quotas and licenses ,”he says.

“Or will Europe again close shop and say ‘we are all Europeans we can land anywhere in Europe we wish’, while turning a blind eye as to the demise of fishing communities , fishing families and fish   stocks ,”he says.

“Large profit driven companies only have one agenda  , profit before people or fish stocks ,  and where in all this is the EUs concern about climate,  with regard to steaming and transporting of fish from these fuel guzzlers,”Flannery says.

“But if the EU  says it is a ‘single market “issue and no action can be taken on flag of convenience vessels within the EU , then  should it not be  that any individual owner of a vessel with quota in any European ICES area should be allowed ,sell , swap or  trade his quota to another owner in another European country  to catch that quota in that ICES area if he so wishes ,”Flannery continues.

“Would this approach not ease the burden of quota poverty that some countries such as  Ireland suffer, “he says.

“ In other words, rather than having to sell off his vessel , an owner in France or Germany could sell his unused  monk or hake quota to a vessel in Ireland fishing in the same ICES area,”he suggests .

“The EU ‘single market ‘ should be good for the individual, as well as for big companies,”Flannery points out.

Flannery welcomes recent publication by  Cork University Press of The Coastal Atlas of Ireland and describes it as a “very important record and historical document on our coast ,and which will be used for posterity, by students and academia”.

“This 800 page plus book  is a credit to all who contributed , but alas the Irish fishing industry gets a bare 13 pages ,”he says.

He says he finds it “baffling”, given that the fishing industry “is and has been the lifeblood of coastal Ireland since time immortal, with over 2000 registered fishing vessels , and over 30,000 people involved”.

“ I honestly find the absence truly hard to fathom , but the more I thought about it , the more the answer came to me,”Flannery says.

“One term, ‘overfishing’, is the mantra of blame of all these  agencies, as fishermen are perceived to be to blame for the collapse of  other species , birds , dolphins, whales and so on,”he said..

“I have seen first-hand  fishing industry representatives working very hard on behalf of their members on the seafood taskforce , with the burden of so so many issues, and each group outside fisheries putting untold pressure on them,”he says.

“The Irish industry is subject to the most stringent and highest level of management and enforcement regime in the EU , due to the fact that Ireland has what we call a fresh fish fleet.

Ireland does not have factory freezer vessels or flag ports of landing like most of our European partners,”he notes.

He believes mindsets may only change when the industry is recognised by bodies like the Higher Education Authority (HEA), and training is incorporated fully into the third-level education sector.

“The HEA could work out a syllabus with the National Maritime College of Ireland in Cork to ensure that commercial fishing is fully part of business and industry,”he says.

“This is not to detract from the great work which Bord Iascaigh Mhara does at its colleges, but the industry  is being squeezed and corralled now,”he warns.

“Measures have to be taken to ensure it is not sidelined, and coastal communities do not become a forgotten part of some sort of subsidised reservation,”he says.