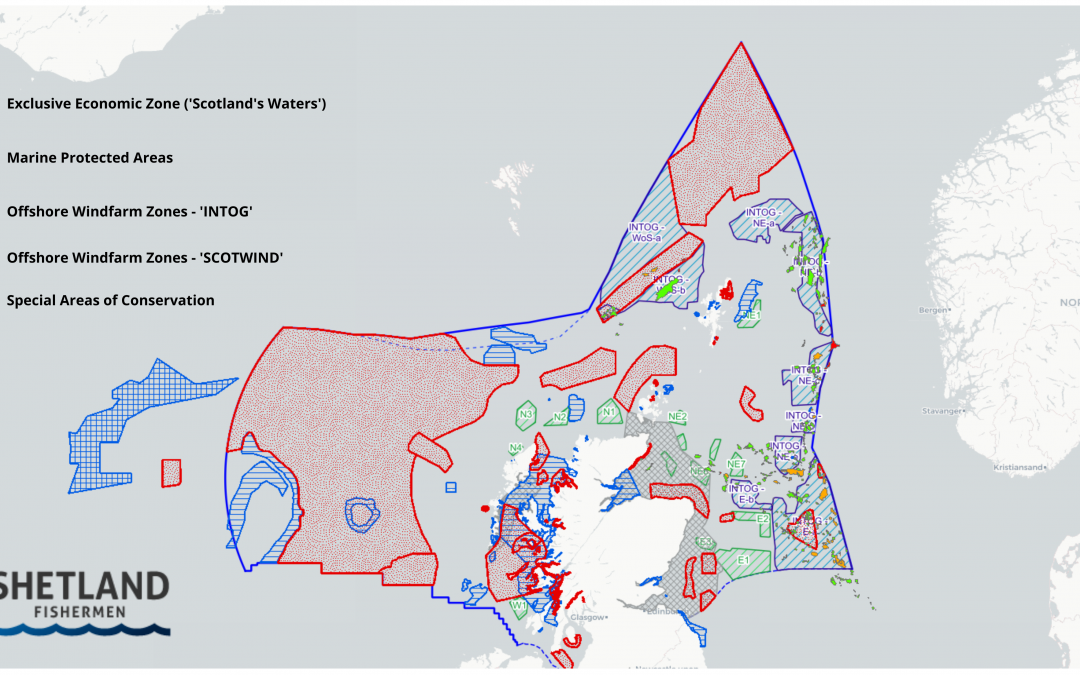 Scottish Fishermen are angry at being crowded out of their traditional grounds by a combination of renewable energy developments and excessive conservation measures.

In a stark warning that legitimate livelihoods are under threat, Shetland Fishermen’s Association is highlighting vast areas of Scottish waters that could be closed off or subjected to severe fishing restrictions.

SFA executive officer Daniel Lawson said: “Fishing crews, so vital to Shetland’s economy, are being displaced from grounds where fishing has been going on for hundreds of years as part of a so-called ‘Just Transition’ that is anything but just.

“Sadly, a climate-smart industry that has among the lowest carbon footprints and lowest food miles of any food producer is in danger of being sacrificed for no good reason.

“Ministers urgently need to take stock of the situation and ensure that there is enough space for the fishing industry to continue to succeed and to support our community’s future.”

The SFA has published a map highlighting the extent of the closed and/or restricted areas in what are universally acknowledged to be Europe’s richest fishing grounds.

Scottish Ministers are proposing to compound the issue further by enhancing the existing fishing restrictions across Marine Protected Areas (plus Special Areas of Conservation), which will mean more fishing grounds lost – and fishing efforts becoming more highly concentrated on the grounds that do remain accessible.

The 2022 Programme for Government commits to also designating 10% of Scotland’s sea space as “highly protected”, on top of the existing MPA network, and the Scottish Government is encouraging offshore windfarm development by leasing seabed sites through its SCOTWIND and INTOG auctions.

In its recently published Fisheries Management Strategy, the Scottish Government

Yet through their actions on protected areas and short-lived offshore renewable projects, Ministers are inhibiting these aims.

Mr Lawson said: “A well-managed and well-supported fishing industry could continue to provide for generations to come.

“Coastal communities currently reap the benefits of the seafood brought back by our sustainable, modern, family-owned fishing fleet. Profits from offshore windfarms will disappear into the budgets of private, wealthy, multinational energy firms.

“There is space for fishing, marine protection measures, and offshore wind to all enjoy mutual futures. Our members accept and understand the way the world is going, but so far this ‘Just Transition’ is taking away vast fishing grounds – and giving nothing in return.

“That isn’t just, and it isn’t a transition.”