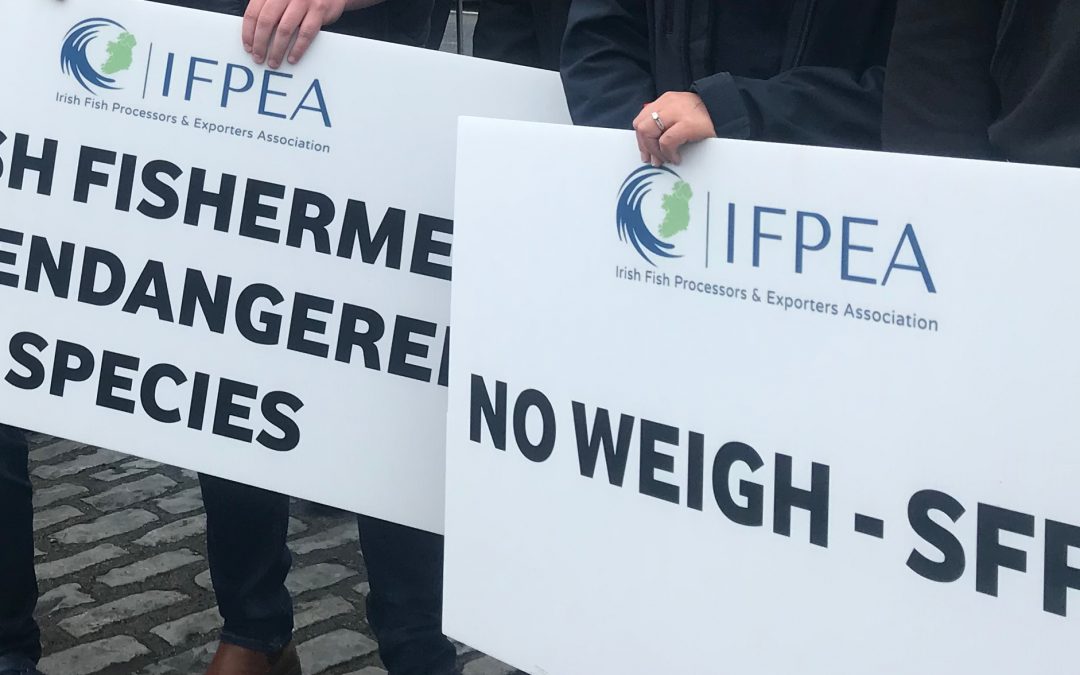 239 households directly affected, with up to 300 workers impacted and 1773 work days lost
for seasonal workers.

In a survey of its members and the wider communities supported by the fish processing
sector, the IFPEA has established that over the past number of weeks, the economy of South
West Donegal has taken a massive hit due to the changes in weighing procedures adopted
overnight by the SFPA on the 6th / 7th March last.

We have found that 239 households are directly affected by the turning away of vessels
from Killybegs, that is impacting up to 300 seasonal workers directly with to date 1,773
working days lost by them collectively. This is a devastating blow to seasonal workers, who
have witnessed their duration of work already eroded due to Brexit/TCA cuts in our fish
quota.

If Killybegs cannot function in line with all other EU Fishery Harbours or ports, then by being
placed at a complete competitive disadvantage due to unfair interpretation of EU rules and
regulations by a combination of the Department of Marine and the SFPA, then this will
definitely lead to job losses and further devastating impacts for the wider community. We
have already witnessed signs of advantage being given to other ports with vessels destined
for Killybegs re-diverting to other ports due to unfair and disproportionate interpretation of
EU rules, or in some cases rules that simply do not exist.

When the wider community context is factored in, it is even more stark; using the data that
every fish producing / processing job supports 2.4 jobs in the service sector then, this will
have devastating effects on our wider communities and in every sector from net makers,
electronics, marine service for vessels and engineering right down to the local shops and
restaurants – no one will escape the impact of this.

The IFPEA have been contacted by dozens over the past weeks. One particular case, a family
that are depending on these blue whiting landings and the additional few weeks work, in
order to earn enough to pay for the 300 litre fill of home heating oil, the daughters last
instalment of the bus ticket now overdue, as well as the other household bills left unpaid to
date – this is the human side of the story that is lost in this madness that we have witnessed
over the past weeks. That family we have highlighted and outlined, did not earn that money
because there was no fish to process. Unfortunately, this is not an isolated case – this is
rural Ireland in April of 2022 but it is not understood by those that have the power to do
something about it.

Families are struggling and inflation is hurting everyone at present but particularly those on
low incomes or working seasonally, the Irish fish industry does not request any special
exemptions or unique treatment, nor do we request any new rules or regulations to be
drawn up.

What we campaign for is the rules which are in place under the Common Fisheries Policy
and the control of fisheries regulations are applied equally and fairly in all Member States
without fear or favour. But, that is not the case when it comes to Ireland, the rules being
imposed on the landing of fish into Ireland are not in any other EU State. Irish pelagic fish
processors have by far the most vigorous monitoring control at present – on average 9 to 10
CCTV cameras recording the weighing of bulk pelagic landing of fish into our factories, these
recording are available for play back for 31 days – not one single other EU Coastal state has
this level of control or monitoring at present. Where are the EU principles of equality –
when with all of these controls more is added, even though no other member state is asked
to step up to our standards?

We as a sector have absolutely no issue with the 5% or 7.5 % monitoring of landings as set
out by the regulations , that percentage can be increased if they wish but we do have
serious issues with is when an interpretation of these regulations leads to the loss of quality
of landings and fish catches and gives our competitors a clear advantage over us by these
regulations restricting our ability to function as fish processors, especially when it comes to
the landing of fish pre transport, while the other member states are not subjected to any
similar regulation.

The SFPA and the Department of the Marine are placing all fish processors and producers in
the pelagic sector at a complete competitive disadvantage by their actions and that is
against the principles of fair competition as up held by the EU.