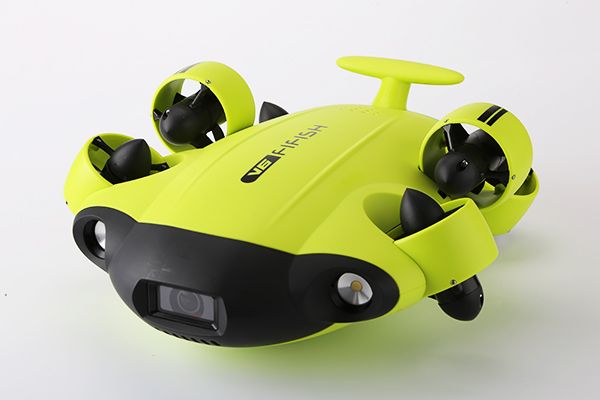 Mantsbrite Marine Electronics have been appointed as UK and Irish Distributor for the FIFISH V6, the world’s first omnidirectional underwater Drone / ROV.  On display at Irish Skipper Expo 2020, the FIFISH V6 is powered by 6 thrusters allowing precise control and remarkable manoeuvrability, currently there are no other ROV’s at this price level which have the same freedom of movement as the FIFISH V6.  The 6 thrusters are a clear advantage as they allow the FIFISH V6 to move sideways, forwards/backwards, up/down, roll, pan, tilt and yaw with exceptional stability down to a maximum depth of 100m.

Manoeuvrability and control are important aspects when considering the intended use of any underwater Drone / ROV, the importance of being able to move laterally alongside an object makes inspection tasks so much easier.  The FIFISH V6 has a number of special features such as Posture Lock™ and Depth Lock that set it aside for inspection and filming tasks. Posture Lock™ allows the user to set the pitch or roll angle to within 0.1° then lock this angle e.g. tilt the FIFISH V6 to 45° then lock that angle while moving in the desired direction. Depth lock allows the user to lock the depth at which it operates. These features are especially useful when performing hull, seabed, wreck, dock inspections etc.

The integrated Sony 4K UHD camera has an ultra-wide angle lens giving 166° field of view compared to 95° as typically found, the wider field of view is better for video photography and will provide more information for inspection tasks. With two variable intensity 2000 lumen LED headlights the FIFISH V6 can be used to record video or take photos even when there is no ambient light. The camera having an aperture of 2.5 and a maximum ISO of 6,400 performs well in low light conditions and provides bright clear images. The camera delivers 4K footage at 30 frames per second or can film at 1080p with an impressive resolution of 120 fps. With an advanced motion stabilisation system the FIFISH V6 also avoids blurred shots.

When in use the FIFISH V6 is connected to the handheld controller by a 50 or 100m cable, and in turn the controller is connected via Wi-Fi to either a smart phone or tablet providing real time video footage where up to 3 devices can connect and simultaneously view the images. An optional HDMI interface box is available allowing the images to be displayed on a TV or monitor with HDMI input.

Another interesting option is the virtual reality headset where the FIFISH V6 moves in the direction the person is looking; it is as if the person is actually onboard the FIFISH V6. The user has full 360° control of the drone’s rotations simply by moving their head. Tilt the head sideways to roll the drone, look up to tilt the drone upward, look to the right to pivot the drone to the right.

The FIFISH V6 has a maximum operational depth of 100m and is powered by a Li-ion battery giving a maximum dive time of 4 hours and has a maximum speed of 3knots. The ROV is compact, measuring 383 x 331 x 143mm and weighs only 3.9Kg

FIFISH is a strong advocate for ocean conservation with 1% of its profits designated for the CleanSea project.