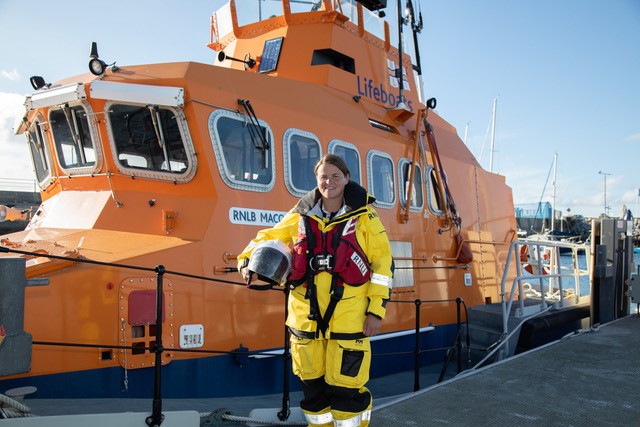 Denise Lynch, a volunteer lifeboat crewmember with Fenit RNLI in Kerry, has been passed out as an RNLI Coxswain. She is currently the only woman to hold the senior position on an operational lifeboat crew in Ireland and is the first woman to be appointed to the role in the country. Denise began as a volunteer in 2001 and has served on both Fenit RNLI’s inshore and all-weather lifeboats.

Denise became interested in lifeboats as a primary school student when her class visited the lifeboat station on a school trip. From a prominent fishing family in Fenit, as a child, she knew and looked up to the lifeboat Coxswain and decided that when she was old enough she would join the lifeboat crew. The middle of six children, Denise (37) is the only one of her family to serve on the lifeboat.

On her appointment, Denise said, “From the day I visited the station in primary school, I fell in love with lifeboats. I know my family and the lifeboat crew are proud of me and I feel incredibly honoured and ready for this new challenge. I have been a Helm on the inshore lifeboat and a navigator on the all-weather lifeboat for years. I think about how we are helping families whose loved ones are in trouble and it hits home how important the work of the RNLI is, along with that of our colleagues in the Coast Guard and other search and rescues agencies.”

While Denise is currently the only female Coxswain volunteering on operational lifeboat crew in Ireland, Helena Duggan, a staff Assessor Trainer with the RNLI, is also a Coxswain. There are currently 155 volunteer female lifeboat crew in Ireland. The charity is looking to recruit more volunteers for a variety of sea-going and station roles and Denise is keen to encourage others to follow in her footsteps.

Asked what advice she would have for other women who might be interested in becoming lifeboat crew, Denise is clear in her answer, “I’d say go for it. It’s no big deal to my male colleagues on the lifeboat crew that a woman is in this role, because they know me and they’ve been to sea with me in all weathers. The trust and respect are mutual between lifeboat crew. They know I can do the job and they know I’m there for them, whatever happens. If you’ve an interest, just give it a cut.”

“The RNLI will provide the training and they’ll know if and when you’re ready to move into a different role. I want to thank everyone at Fenit RNLI for supporting me and the RNLI for giving me the opportunity. It’s very special to the be first but I hope there are many more to come. I hope it encourages more people to volunteer.”

Commenting on the appointment, Fenit RNLI Lifeboat Operations Manager Ger O’Donnell said, “We are delighted to have a new Coxswain at Fenit. Denise is a great addition to our Coxswain team and has been a valuable member of the lifeboat crew for many years. We are lucky to have so many great volunteers at our station who fill a variety of roles, from fundraising to operations. We couldn’t function without them and they all play their part to save lives at sea.”

Anyone interested in volunteering for the RNLI, the charity that saves lives at sea, can find further details at www.rnli.org/volunteer